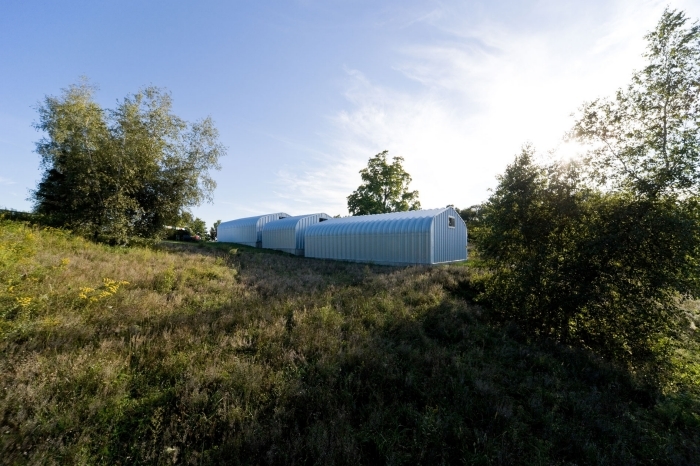 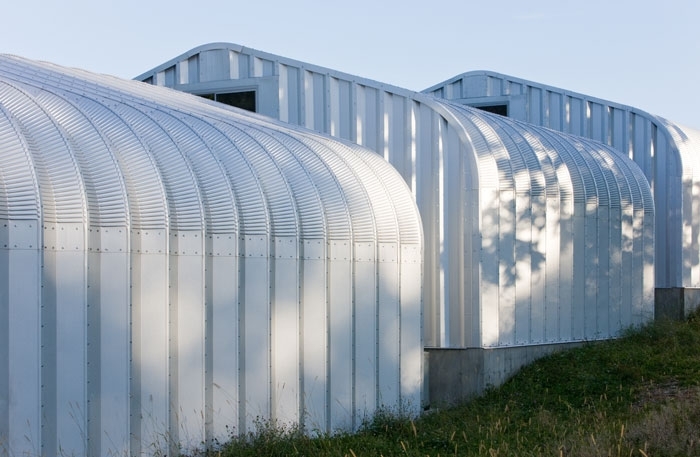 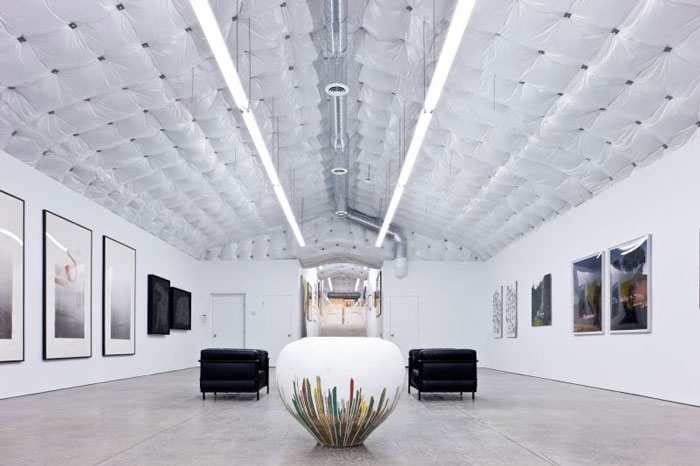 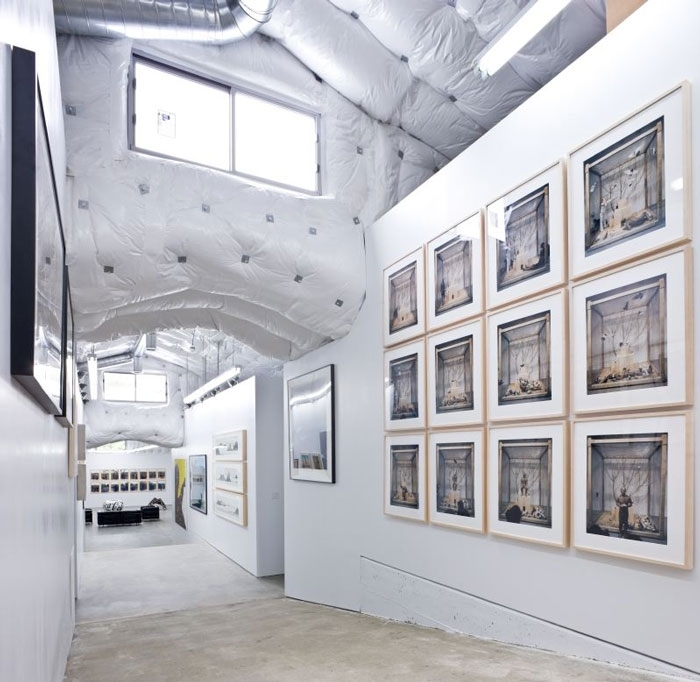 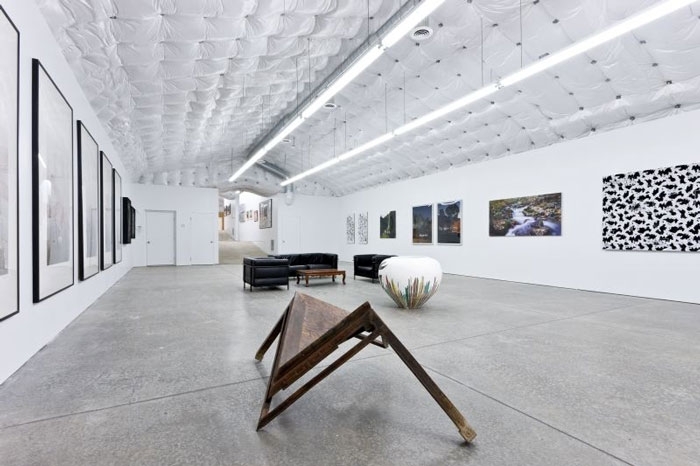 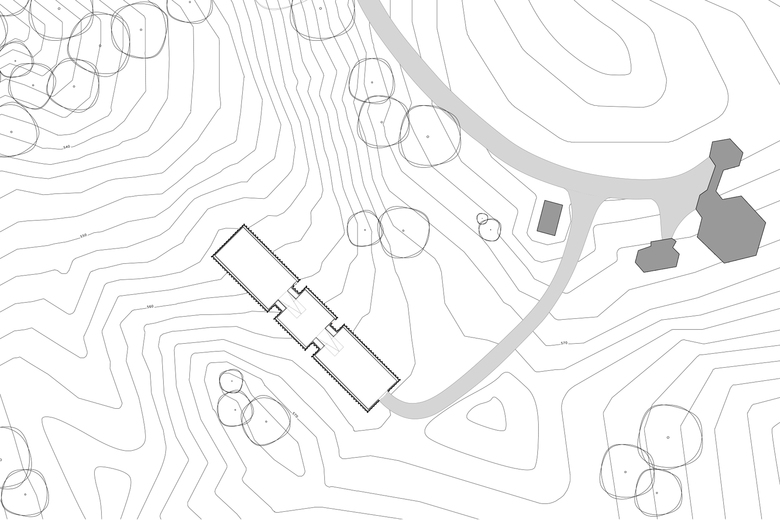 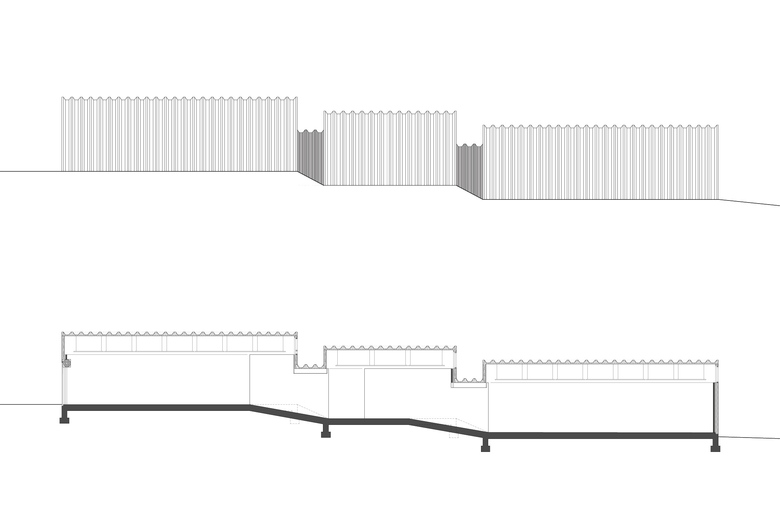 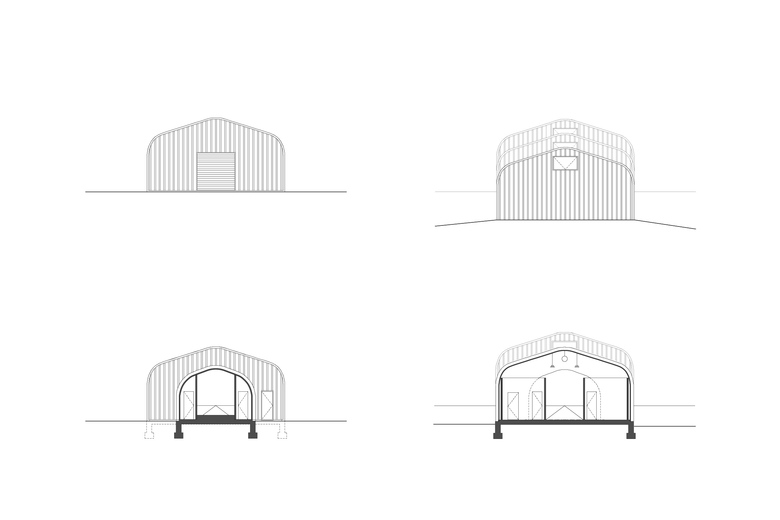 The Artfarm is situated in upstate New York (a 90 minute drive from the city) on the estate of an art collector and gallery owner. The building is divided into several exhibitions spaces of varying sizes and into areas designed especially for storing artworks.

The outer form is a direct consequence of the prefabricated galvanized iron sheets often used in the area for agricultural utility buildings. Because of its abstract outer form and the metallically shining appearance, the building becomes an equal participant among the sculptures and objects scattered throughout the surrounding landscape.

The villa by architect John McFayden, situated on the top of a hill, was to be supplemented by an art facility that was to be both a gallery and storage space. The volume had to be as large as possible, but nevertheless inexpensive. The architects therefore employed prefabricated galvanized iron elements as used widely in the U.S. for agricultural buildings. The Artfarm erected on a concrete foundation consists of three corrugated galvanized iron huts connected to each other via short passageways. The huts' walls make the transition to the saddle- back roof via a curved connecting element.

With 370 square meters (about 4,000 sq ft; the usable floor space is the same as that of the Tsai Residence), the six- meter high body of the building gives the impression of a spacious structure, and that even though only three small, high-up windows to the north enable a view outside. The lower part of the building serves as a showroom, the upper part as a storeroom, while the middle part houses separate rooms for an office and a more intimate presentation area. Concrete ramps along the central axis connect the areas.

A showroom and storage space could scarcely be realized with simpler means. Nevertheless, the simple utility construction, costing no more than around 250,000euros, fits perfectly in the surroundings with the scattered art objects. From the outside its function remains enigmatic; on the inside you could think you were in another world. This impression is reinforced above all by the cladding of the interior spaces, which seems like upholstery with large buttons. The shell was insulated with insulating material and clad in white PVC foil which not only reduces heating and cooling costs to a mini- mum, but also insulates the building acoustically. This is essential for a place calling for high levels of concentration. — Text by Hubertus Adam