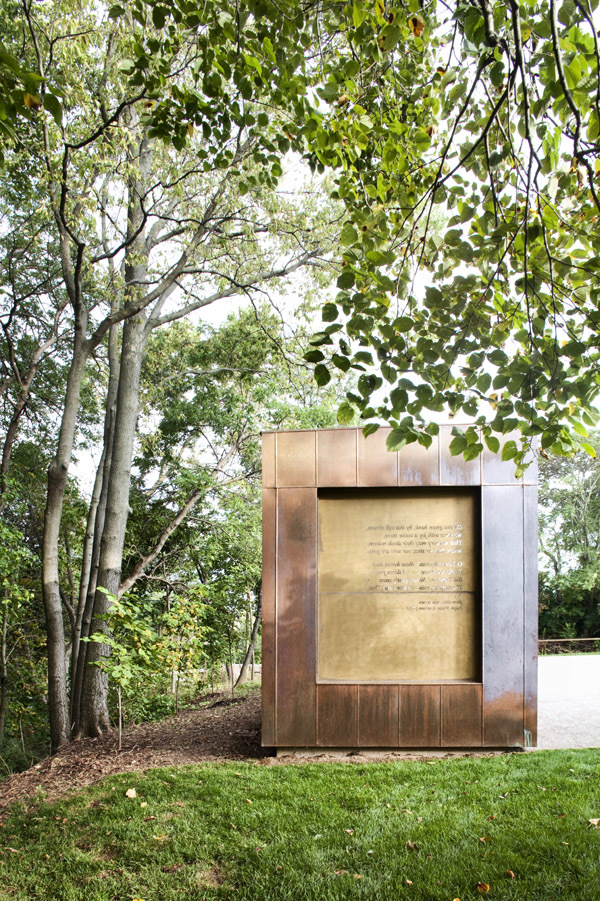 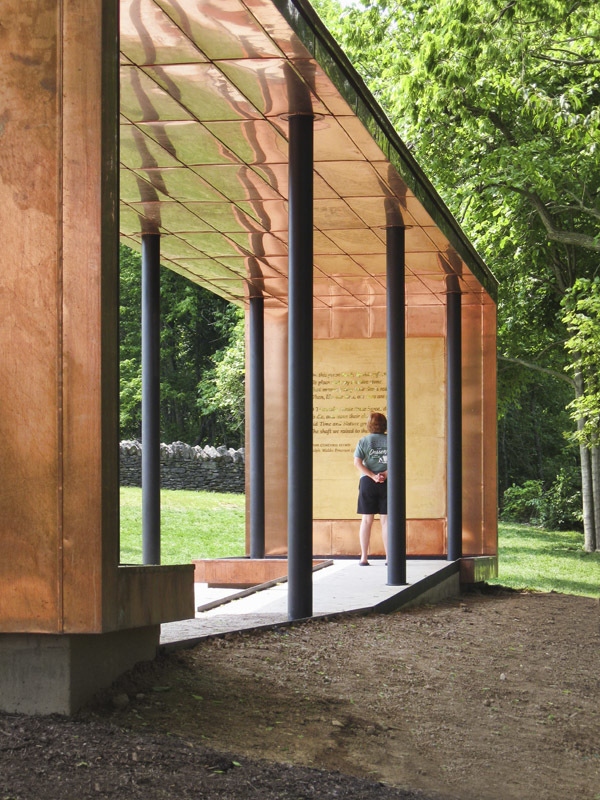 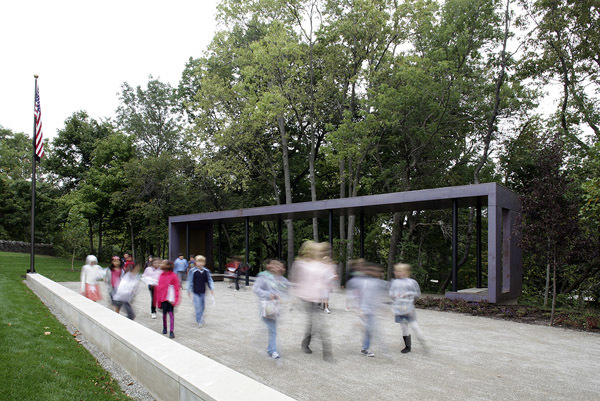 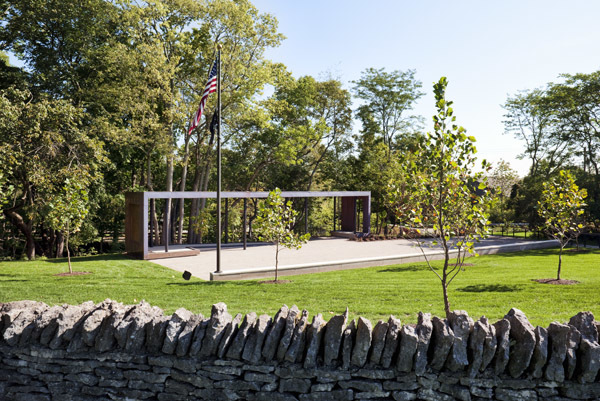 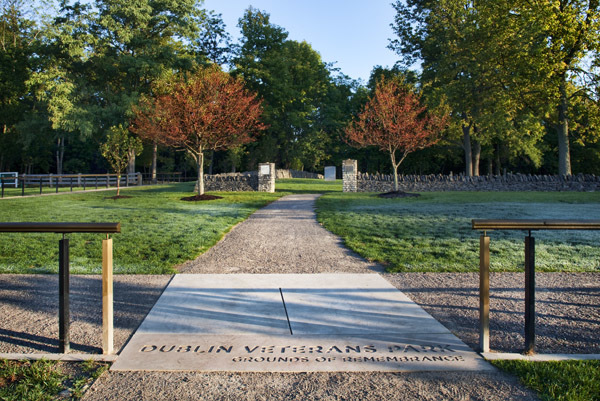 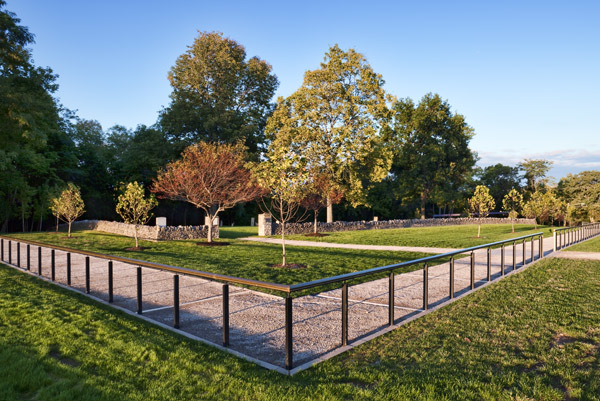 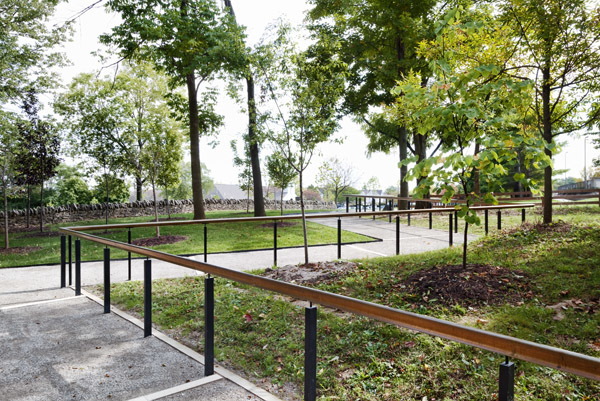 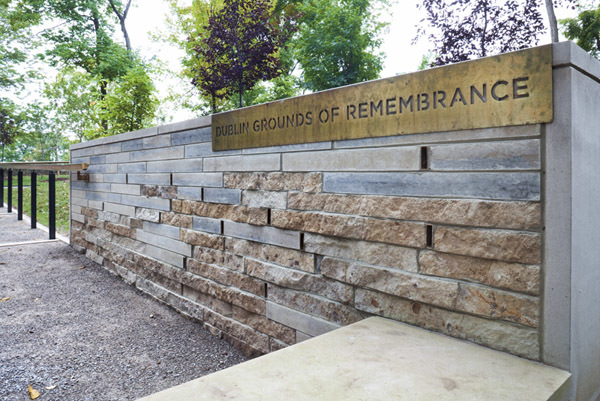 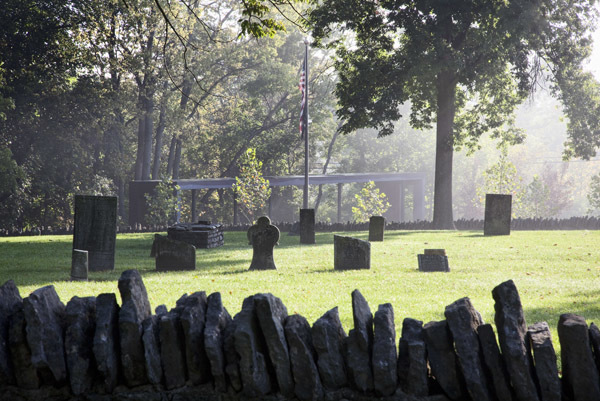 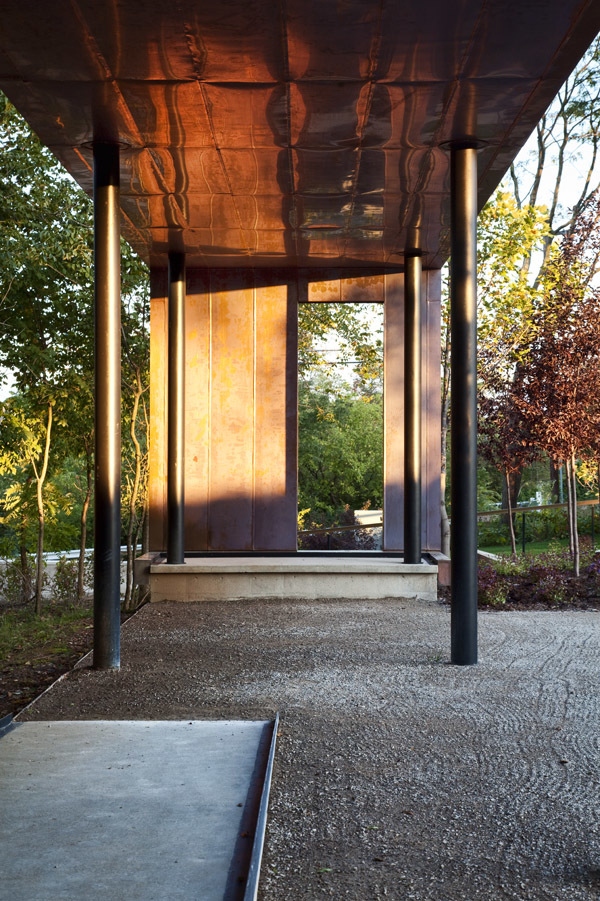 The Dublin Grounds of Remembrance in Dublin, Ohio, is a one acre-park honouring the service of veterans and their families. On a site with no prior military significance, the project eschews a traditional “monument” in favour of promoting the act of habitual walking and social gathering, reinforcing community remembrance and creating new significance for the land.

In 2007 the Veterans Committee launched a two-stage, international design competition for a ‘veterans project’. The site was situated on a marginal ravine right-of-way that formed a doughnut around the 1840s village cemetery. Dublin’s five-acre settlement had ballooned into a 16,000-acre golf suburb in only thirty years, nearly abandoning the historic village and resulting in the newly built library and school turning their backs on the cemetery. This project is key to the City’s programme to revitalize the heritage settlement.

This project creates a formal place for public gathering, and informal places for intimate contemplation. The copper Loggia, with its panoramic window, shelter and bronze poem wall laser-cut with two stanzas of Emerson’s "Concord Hymn" (1837), stands as a formal ceremonial backdrop, serving both as the hub for Veterans and Memorial Day celebrations and as a daily retreat for visitors. The Recognition Walk, bronze Guide Rail and new Sycamore Grove choreograph a contemplative route to the Dedication Seat Wall and Memory Wall, where visitors are able to engage in intimate reflection.

These architectural and landscape elements reveal and engage the cultural and natural history of the site by creating and framing a unique dialogue of textures: bronze that polishes with use, smooth limestone, sycamore bark, and the jagged cemetery wall. The crisp, transparent Loggia, the laser-cut lettering of Emerson’s "Concord Hymn", and the perforated Memory Wall collectively frame the rugged landscape of the ravine at both large and minute scales. The rugged presence of the Memory Wall and the startling appearance of the mottled Sycamore bark draw from, and respond to the texture of the ravine’s limestone cliffs and trees.

At the opening on Memorial Day 2009, a record-breaking 1,000 people gathered for the new ritual on the new site. Now connected to the ravine, the wheelchair-accessible site is used daily and the Memory Wall is continuously filled with private notes. The ritual has been fully integrated into the town’s ethos, renewing the village by creating a “place” out of an undefined piece of turf.

This project contends with how we publicly construct narratives of “home” and “nation” by defining and architecturally framing community ritual as an alternative to the ideological battle between representational statues and abstract form – raging since Maya Lin’s Vietnam Memorial and recharged by 9/11 and the Iraq War. Ultimately, we selected Emerson’s "Concord Hymn" (1837) to explicitly unite land, service and the birth of the United States, and to allow each person to participate in the making of meaning.