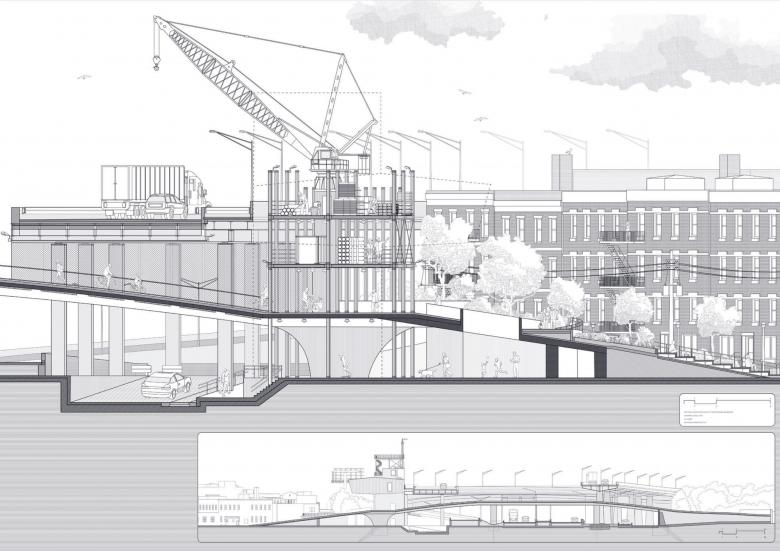 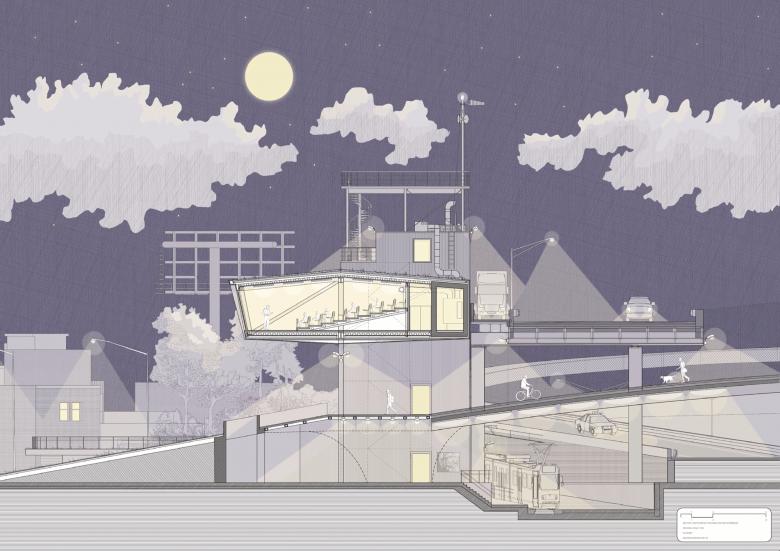 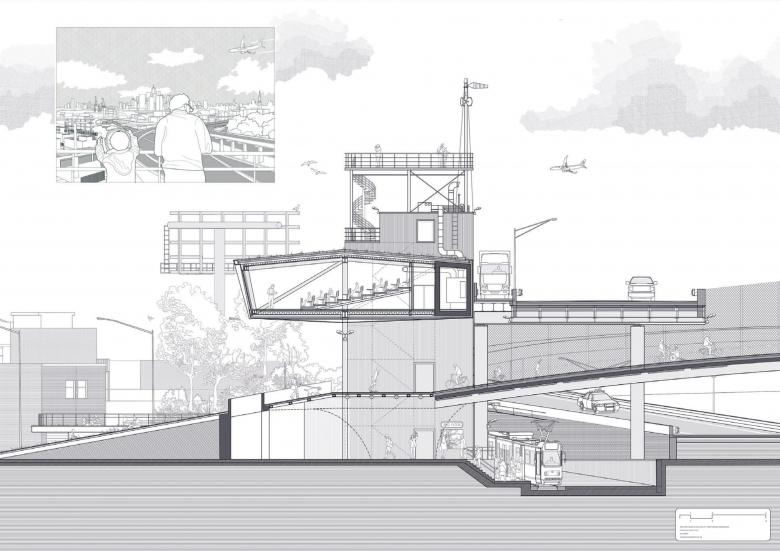 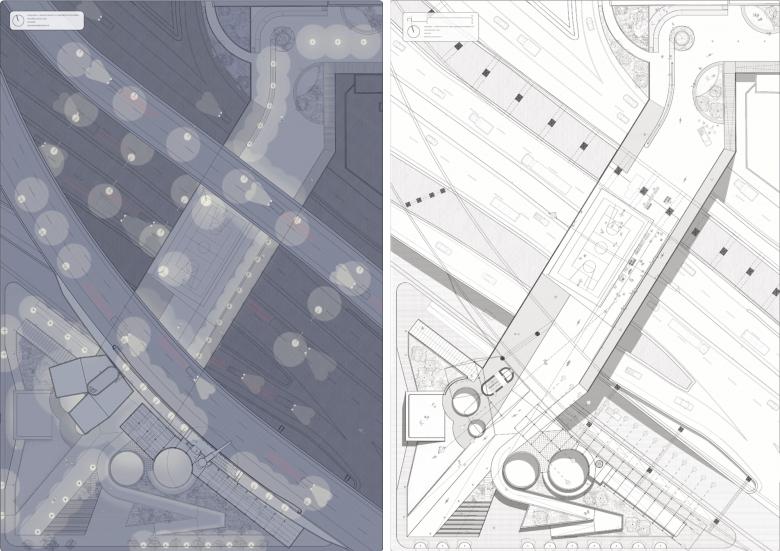 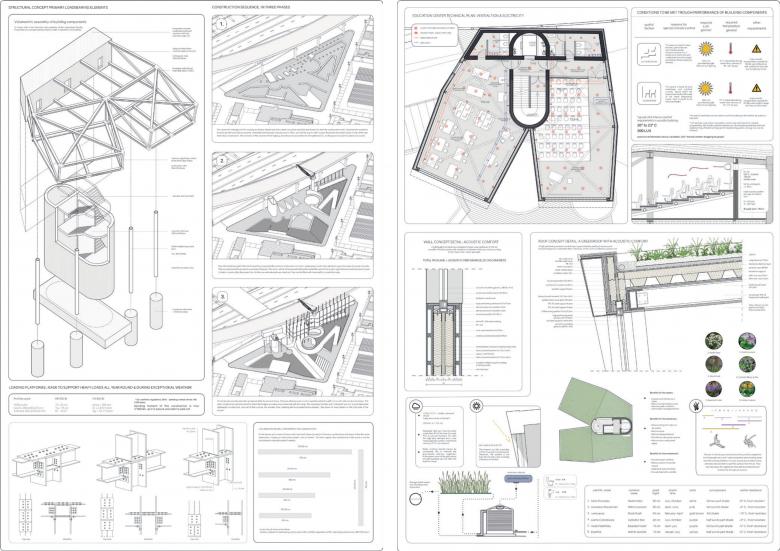 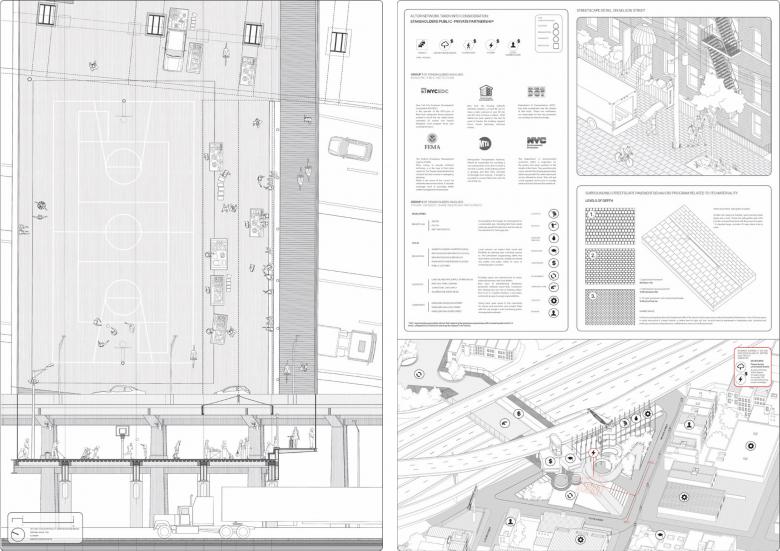 Striving for Urban Resilience, The Making of a Regenerative and Lively Connection Beyond Infrastructure

This project aims to improve the existing urban network in Red Hook. By redeveloping an old overpass that should prevail more than the sum of its parts. Thus, becoming a destination and grow as the foundation of a reimagined urban fabric. Conceptualizing a new type of urbanism that unlocks the potential to be replicated in the New York area and beyond.

Entering this neighbourhood, one could be a little lost. Why is this place so horribly severed from Brooklyn? This area is cut off by the Gowanus Expressway, a creation of Robert Moses from the ‘60. Its appearance is defined by a (un)intentional crossing of layers and borders. Duty-bound, they grew over time. This boundary is omnipresent. In the daily life of Red Hook inhabitants, and in the urban conception of all New Yorkers, the created barrier is fundamental for the culture of both sides. Like a river, it cuts through the urban landscape. Northerners and Southerners live side by side, rubbing shoulders with one other along a bustling thoroughfare. Crossing the narrow connection that joins them.

The poor accessibility of Red Hook can be traced back to the use of outdated building codes and old-fashioned ways of looking at land ownership, city planning, and management. But, its confined nature opens the opportunity to strengthen its connection and better the adaptability for its users at single points. Creating better pedestrian and cyclist routes, connecting to a better functioning public transport network, and providing a base for densification, this bridge can become the cultural and social backbone of Red Hook. A combination of ways to get on top of the ramp would suggest an ambiguous, lively, and flexible environment. Altogether, different modes of movement make a multiplicity of scales that stimulate various activities of sudden abundance. So can voids and gaps, narrowed pathways, and forced routes to help to create urban sequences and rhythms that could otherwise not exist. Creating a non-programmatic specification that enforces sudden abundance of activities versus unplanned uses in the area. On top of that, a public-private partnership is nested. Accommodating the hunger for future development sustainably. Red Hook needs an adequate growth of infrastructure from its core and not only at the waterfront. Local dealers use the loading platforms to extend their businesses. They can own a share of the infrastructure to extend their logistical needs. Neighbouring schools make use of the auditoria and classrooms throughout the day. This project shapes itself around the existing highway infrastructure and pushes it to its boundaries. Embracing the ambivalent and eclectic nature of its environment. No one is bothered by the sound of traffic anymore; the noise is what makes New York what it is. It could be a primer landmark of reconfiguring future growth and become the access point to include areas that are currently omitted by tourists or visitors. Improving educability at the conception of New Yorkers, a finely worked combination of qualities is applied. But, this implementation is a question of qualities and quantities, but also categories and capacities.