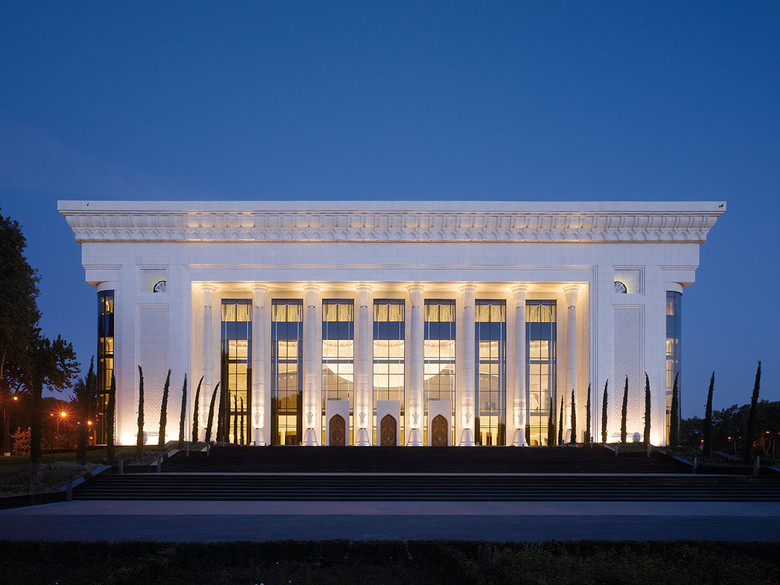 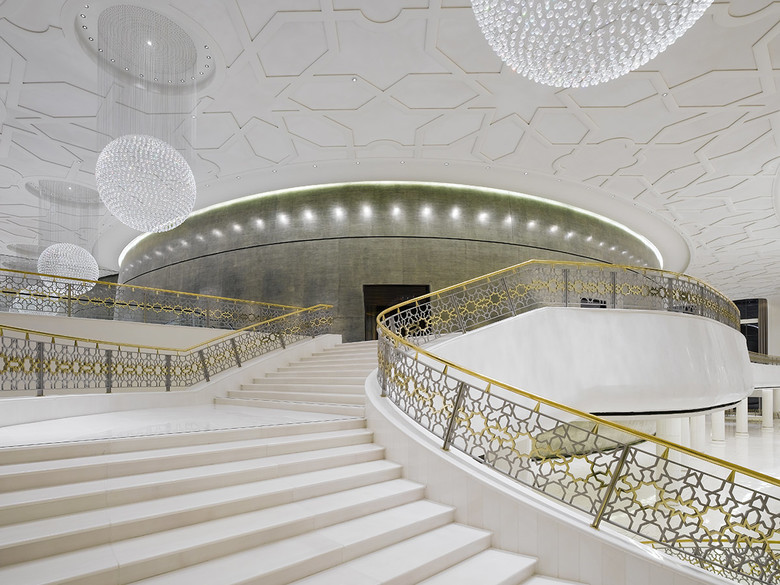 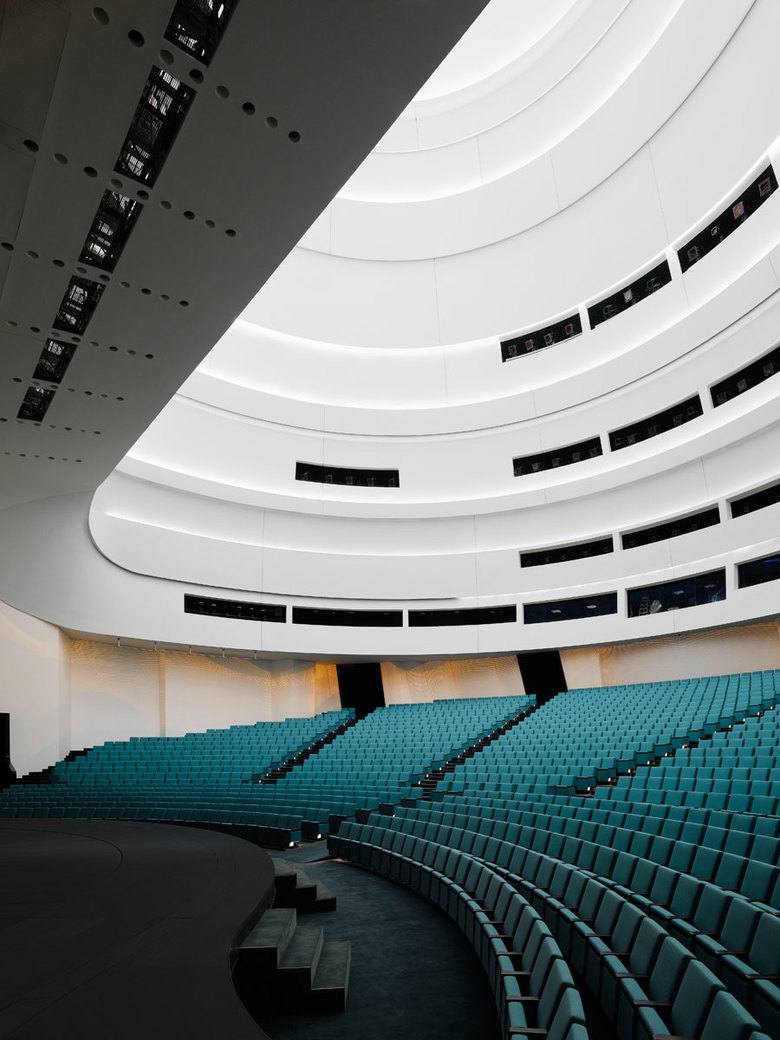 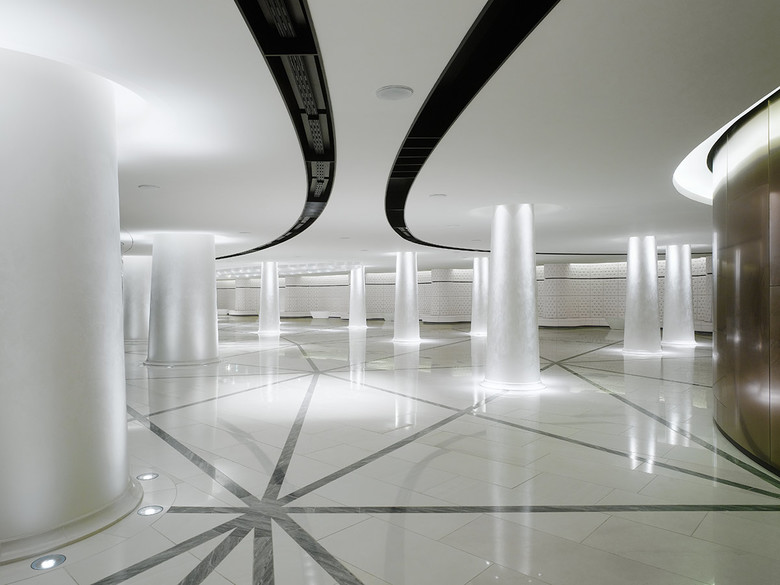 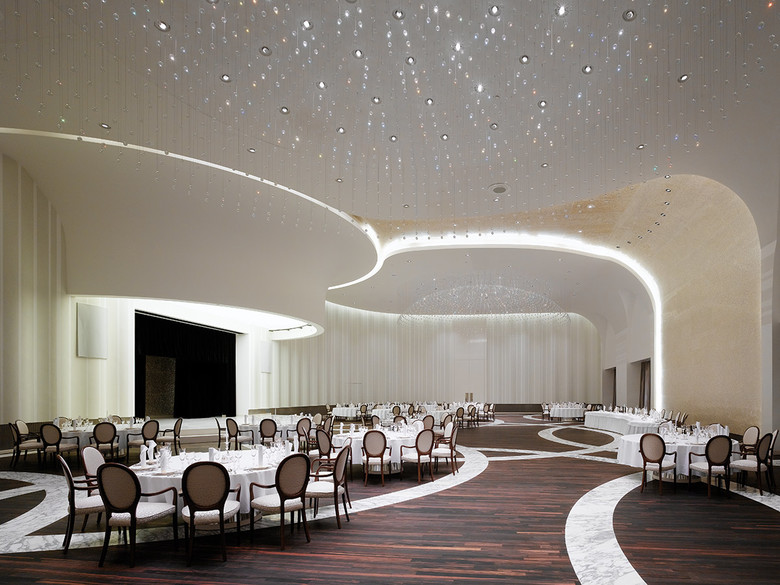 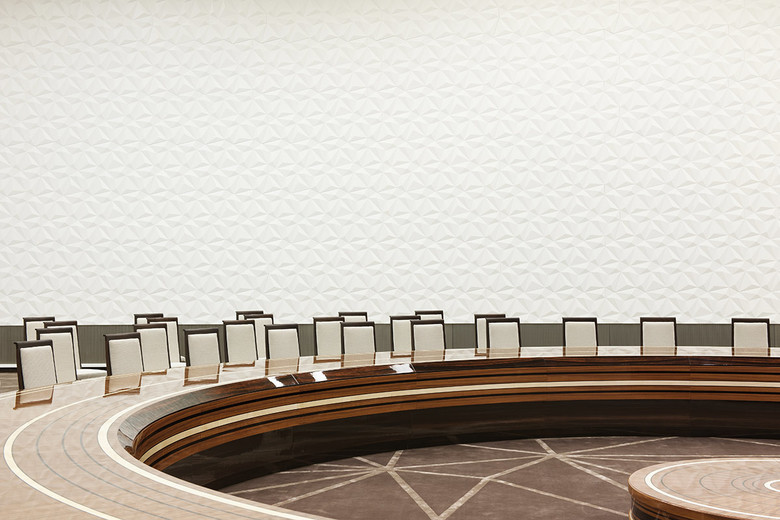 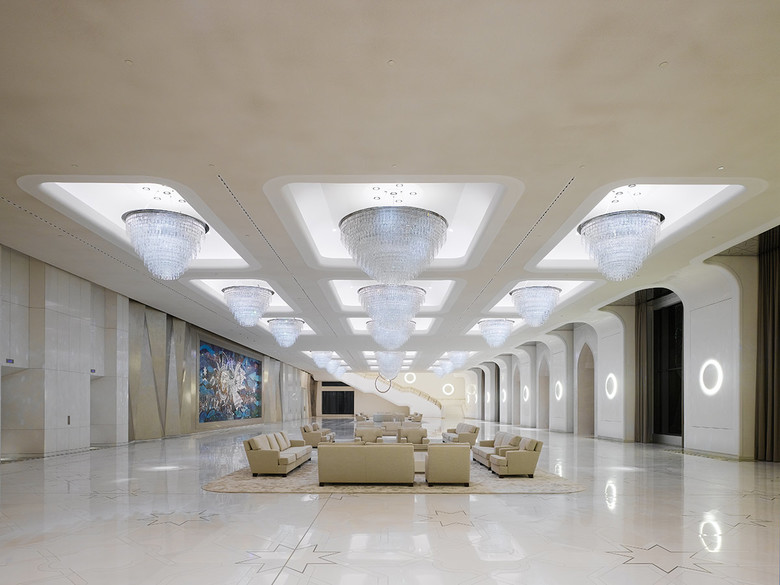 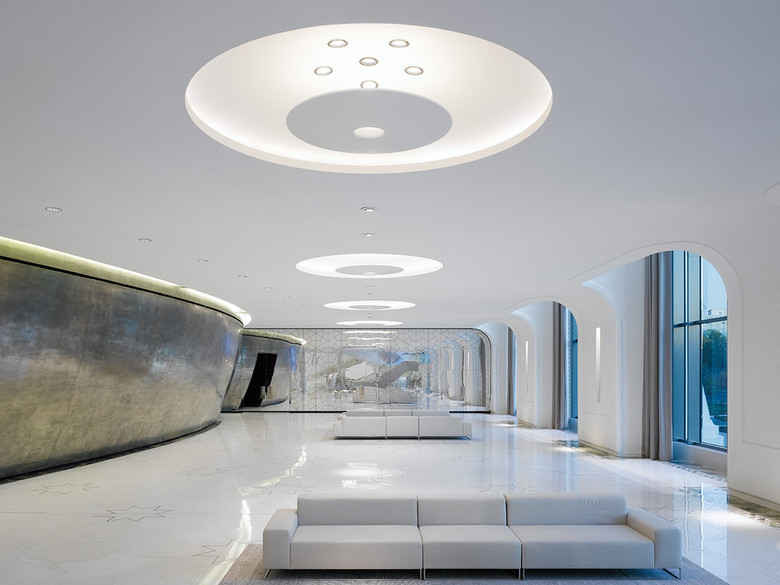 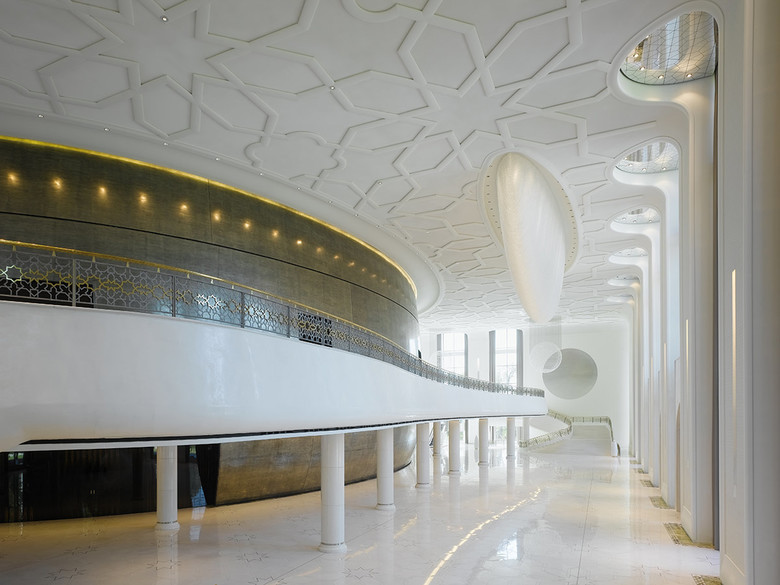 The Palace of International Forums »Uzbekistan« stands on Amir Timur Square in the very centre of Tashkent. The country’s most important representative building is designed as a platform for hosting acts of state, congresses, conferences and other cultural highlights. Our task was to give the interior a contemporary form, while incorporating elements from traditional Uzbek architecture. The result is a cosmopolitan, communicative interior clothed in exclusive materials. Planar ornamentation, organic movement, crystals, precious metals and a fascinating interplay of artificial and natural light all become a source of inspiration.

Classical in its external appearance, the building prepares for the modernity within through the extensively glazed façade. Behind illuminated façade columns of Thassos marble a similarly weighty epochal semicircular Swarovski chandelier dominates the main foyer. Gigantic and contrastive, the two structural elements of columns and chandelier, conjunctions of various architectural traditions, introduce syntheses of Western and Eastern culture. Three marble portals with carved wooden doors lead into the vestibule. The generosity of the main foyer with a ceiling height of over 16 metres and an area of 2,500 square metres is deliberately staged and atmospherically compact. The spectacular chandelier with its nine-metre height and 23-metre length outlines the longitudinal axis of the foyer. This unique piece was created from 1.1 million Swarovski crystals. Reflecting the front of the building, a gallery marks the longitudinal axis. To the sides it opens up into diametrical open staircases in an open, embracing gesture to the foyer. In the open floor plan they support the organisational structure of the interior. Part subtle spatial structure, part design objects, the “floating” staircases relieve the monumental palace coulisse. In accordance with modern material valence, they and their balustrades are coated with Stucco Veneziano, a smoothly-polished, warm-white stucco with marble dust added. Ornamentation is applied throughout the building in a diverse variety of possibilities and materials to provide stylistic elements of the country’s culture. They can be found in brass and stainless steel in the balustrades of the gallery. The ornamented foyer floor of light Sivec marble is rhythmised by traditional motifs of stainless steel. The floor is contained by a circumferential wall frieze of Irish green marble in the classic manner. Scaled up, the geometric motion of the floor is echoed on the ceiling and, as a three-dimensional decorative border reminiscent of Gantsch carving, optimises the acoustics of the room. The 16-metre-high window axes of the foyer are a decisive factor in the spatial perception. Stretching up from ground level, rounded toward the ceiling, they condense the clear room height and epitomise unity – architectural as well as cultural. Ornamented mirrors above the windows dramatise the vertical dimension. Silver-coloured drapes stretching to the ceiling set gentle accents in this breadth of space. Opposing concave palladium panels complete the longitudinal direction of the foyer. They concentrate and amplify – as do the plaster relief walls complexly cast according to Uzbek tradition – reflections of artificial and natural daylight. Emanating from the palladium shields, eight spherical chandeliers of up to 3.4 metres in diameter crown the side wings of the gallery. Only crystals of 70 millimetres in size were used for these lighting fixtures, 2,880 Swarovski crystals for each chandelier. Above the clamps of the stairs, levels of mirrors with surface ornamentation optically double the length of the foyer and alignments of light the round chandeliers. The element that does most to give the building its identity and also the building’s largest room is the 1,850-seat Auditorium. With the “house within a house” the generous palace architecture – softer and organic – finds a counterpart in the interior. Plastically bulging out, the body of the hall asserts itself in the exterior area of the main foyer and gallery. Its skin – the world’s largest liquid metal surface – measures 2,000 square meters. Almost sensually, the zinc-brass alloy with its living patina achieved in 16 polishing operations expands under the pressure of the hidden interior.

Six portals of highly-polished ebony provide entry into the Auditorium through the metal skin. Subdivided horizontally into two sections, the gigantic hall with its classical fan-like amphitheatre form is a place of inspiration. With a height of 48 metres and a diameter of 50 metres, it is of imposing capacity. Above the rear Corian wall, milled to varying depths, in the lower section, the hall opens up into an asymmetrical dome. 600 tons of steel were used for the overarching construction of this roof-light dome. The cupola, historically an important detail in the Uzbek culture of construction, also integrates functionality with new aestheticism. Arranged above one another and offset to each other, circumferential fasciae bind together the stage and auditorium to form one entity. Multilayered and illuminated from behind, the cupola fasciae ensure both good room acoustics, since they absorb sound completely, and sublime lighting atmosphere. Thanks to precise lighting technology, the bands of florescent and LED lighting that run off-set around the rings transform the space into a weightless body of light as required. Turquoise-blue upholstery fabric and hand-tufted carpets provide a reference to the country’s national colours and identity.
The stage mechanics and technology also meet the highest of demands. Cutting-edge technology provides optimal conditions for symphonic concerts, ballet or theatre performances, as well as congresses and conferences.

The observer encounters integrated design themes everywhere, throughout the building. One of these is the display of light and reflections in broken surface structures, natural stones, or cut crystals. A striking specific example is provided by the refractions of light in the VIP Foyer. Hanging from rectangular, indirectly-lit cupolas, 18 Swarovski chandeliers dominate the atmosphere. An supersized folded wall of leaf-palladium continues the play of light. The precious metal visually frames an equally unique, hand-made marble mosaic. Polished marble floors deepen the perspectives of this room of light. As a further integrated detail, the mirror elements double the spatial axes along the windows, as already seen in the foyer. Guests access the banqueting hall and conference room via exclusively-furnished elevators and large stairways. Rings of light measuring up to 5.2 metres float weightlessly in the centre of the stair wells. Entwined in each other and set with Swarovski stones on the outer edges, they reveal mystical perspectives on each floor level. They find their counterparts on the – round dishes that capture the light and concentrate it in their surrounding area. Visible is only the light of the sensory objects, never its source. Lavish, hand-tufted silk carpets with islands for communication and hospitality condense the calm of the room.

Aligned along the middle axis, stage and presidential area are visually connected in the Banqueting Hall. A further consolidating element is the precious nacre wall rising dramatically to the ceiling. To the left and right of the stage, optically undulating walls coated with Swarovski wallpaper strive toward the presidential area. This undulating wall structure appears as a continuation of the stage curtain and produces additional depth through the effects of reflection. Two hanging Swarovski domes of light measuring eleven metres crown the hall; their spherically-dispersed crystals fill it with softness. A counterweight is provided by the solid parquet floor made from Makassar ebony. Sophisticated in their ornamental character, inlaid 0.5-metre-wide strips of Arabescato-Corchia marble structure and expand the room. In many construction details protruding forms and fine surface textures stand juxtaposed to one another, but always managing to generate harmony.

The room for international summits is dominated by an exclusive round table with a diameter of 10 metres. Linear light rings of sycamore and dark rings of ebony are inlaid in the made-to-measure walnut piece of furniture. In its presence, the table provides the representative and stoic focus for work. Above, it is spanned by a concentric cupola matrix coated with leaf-palladium. Below this, arches a Swarovski cone. Incorporating the centred impact of the room, the ceiling of light rings, the reveals of which are coated with palladium, stretch toward the outer edges. Opposite the glazed front, a large faceted surface with a three-dimensional relief forms a focal point. The interior light breaks in varied and subtle manner on this surface ornamentation with its modern interpretation. The pattern of the relief is also incorporated in the hand-tufted carpet.

Large open stairs connecting the various levels lead to the lower foyer with its restaurant, the floor of which – also polished Sivec marble – bears star-shaped ornamentation of Bardiglio-Navulato marble. The alignment of the gently inclined ceiling, resting on columns, lends the room its dynamism. The contemporarily-interpreted columns are given their exclusive material depth by the mother-of-pearl visual effect of the Stucco Veneziano. The lighting grooves surrounding them orchestrate the fusion of columns and ceiling. A pendant Swarovski chandelier floats sublimely in the centre. Filling the space, it charts the long oval of the foyer. Soft forms shape the room, also in its functional requirements. Internal elements of ventilation technology and lighting installations make their appearance only through discreetly opening grooves in the ceiling. They perspectively support the room dynamics. In the lounge, seating compartments, arranged around conical tables that appear to have been cast, and leather clad walls with Chesterfield upholstery merge together. Indirect sources of light fall on the metre-long, made-to-measure scenario of buttons and upholstery that stands in appealing contrast to the bronze-coloured, embossed, stainless-steel walls opposite. A wave-shaped glass wall separates foyer and restaurant. On the one hand, the new materiality allows a suspenseful contrast to the regular surface of the stainless steel; on the other hand, it also supports the room acoustics. The ceiling inclining toward the buffet continues the network structure and dynamism of the anteroom. Clear contour lines and monochrome colouring dominate the restaurant. The 28-metre-long buffet is placed in front of a wall of ebony. The free-flow layout, designed in stainless steel and glass, can serve up to 3,000 guests. The preparation of the dishes is carried out with energy-efficient kitchen technology and gastronomic equipment of the premium segment. The representative hospitality technology with several cold and warm kitchens, in-house confectionery, butchery as well as a presidential kitchen with attached laboratory covering more than 1,700 square metres is augmented by a further 3,200 square metres of wide-ranging production and technical utility rooms to guarantee optimal support.