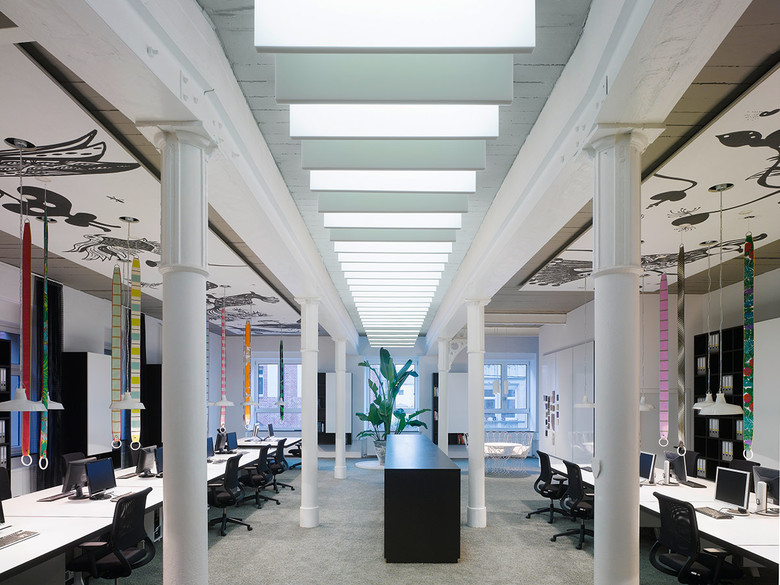 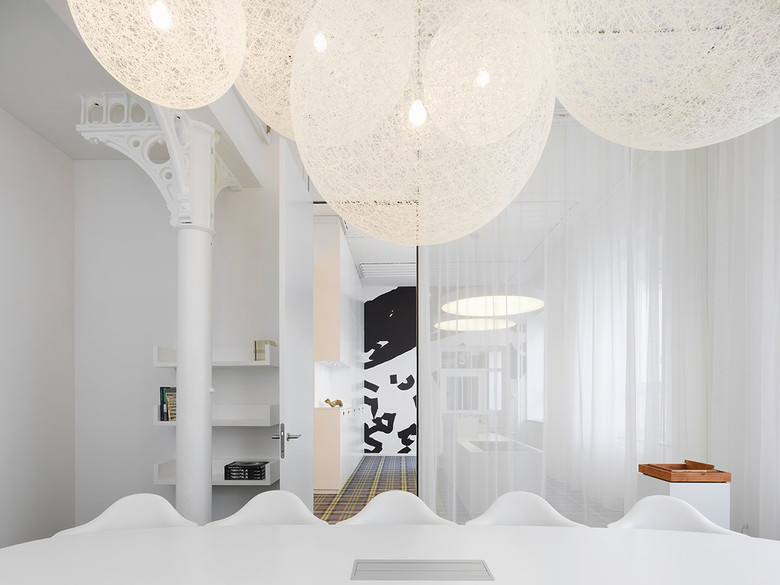 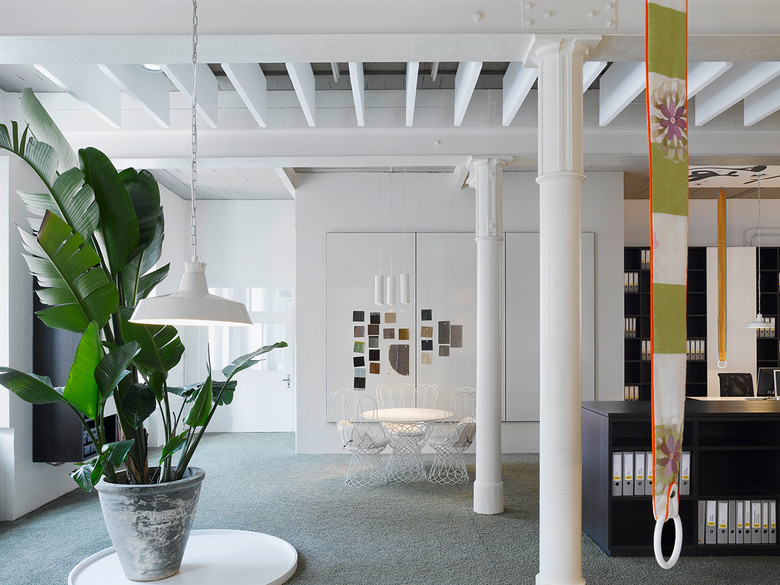 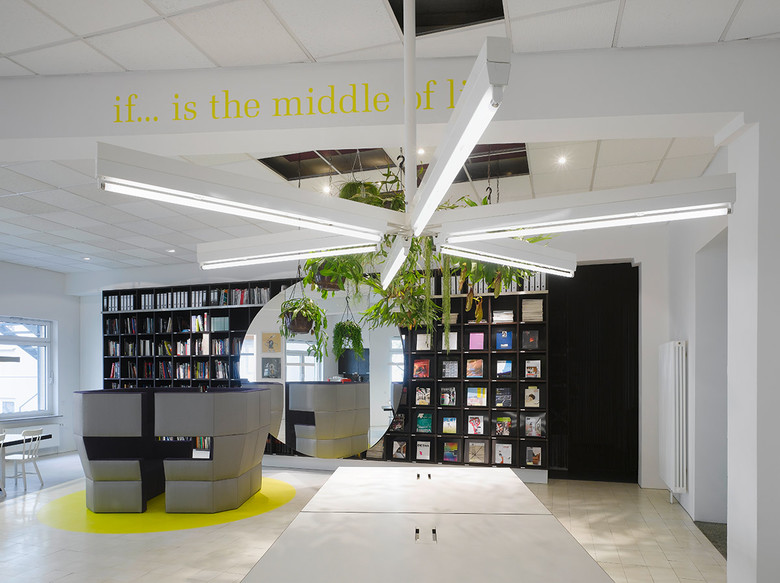 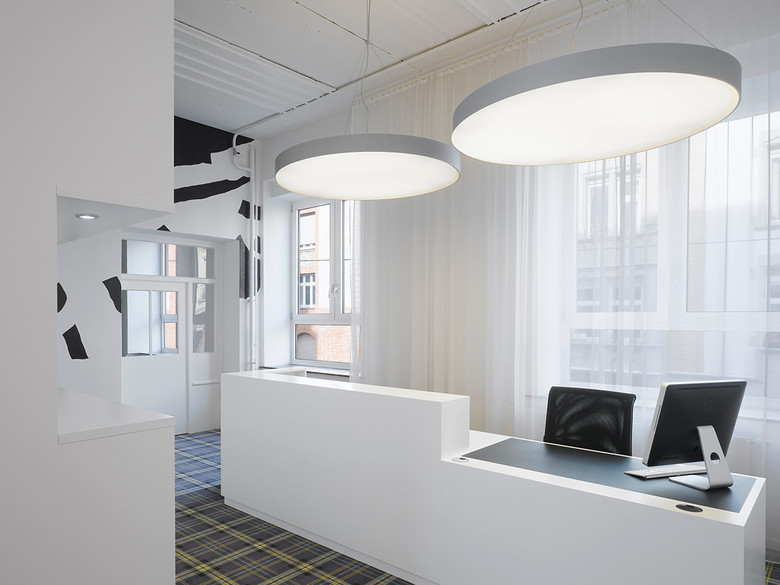 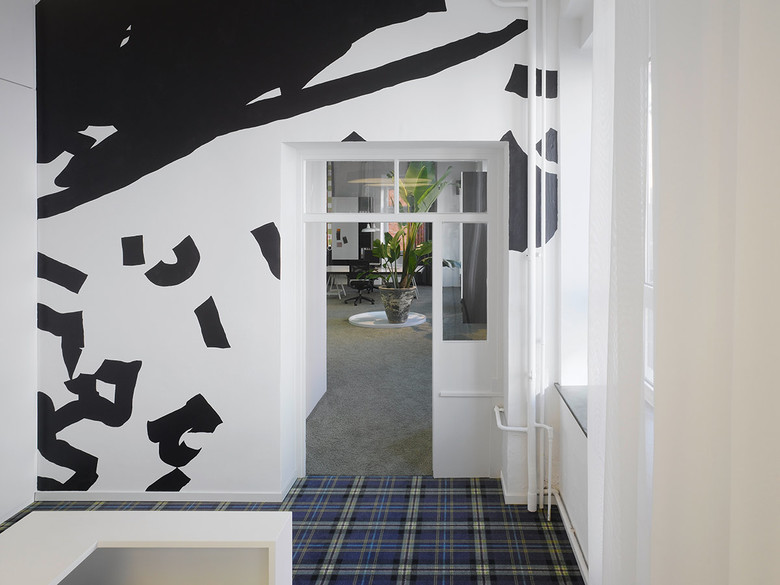 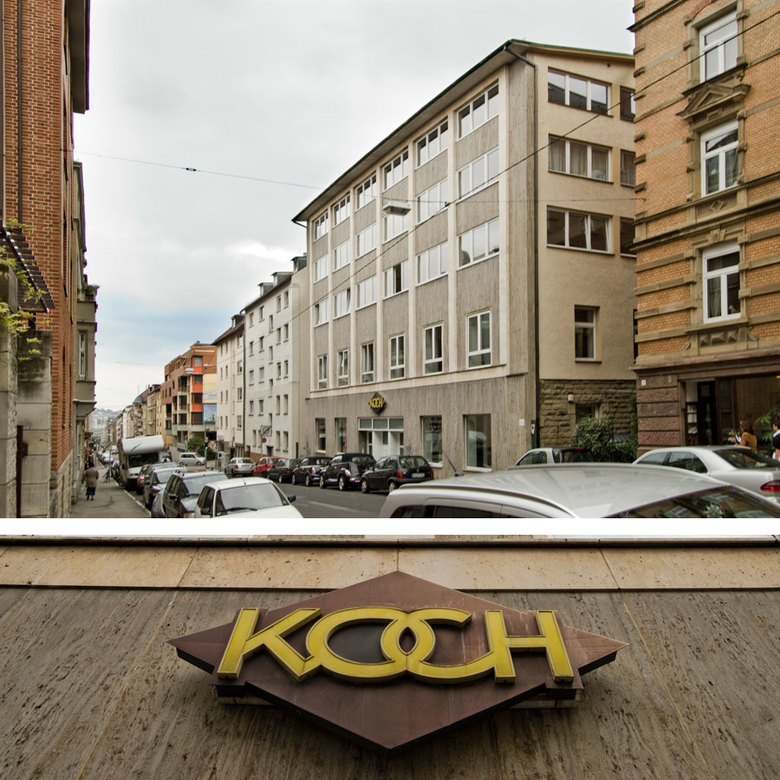 Over the last six years, design studio Ippolito Fleitz Group’s has successfully expanded both its work base and team. In response, our architects, interior designers, product designers and communication designers have pooled their resources to create a new working environment on one floor of an old factory building. Reflecting the studio’s conceptualisation as ‘identity architects’, the new premises were designed as a quasi signature trademark for clients and studio staff alike.

The studio found new premises in a former factory for control technology in the west of Stuttgart. The five-storey Gründerzeit building was originally built at the turn of the last century to house an industrial laundry. Largely reconstructed after the war due to heavy bombing damage, the first floor of the building retains something of the building’s original character as a production facility. The four-metre high ceiling is supported by cast-iron pillars, a feature rarely found in Stuttgart, giving the space a nostalgic feel. With a floor area of almost 500 m², the studio provides the necessary space for free, creative thinking. Inspired by the building’s original design of individual rooms assembled around a stairwell, each area was given its own separate identity, the sum of which tells a coherent story.

The entrance to the office is consciously staged. From a tiled and rather sombre staircase, through a heavy metal door, the visitor enters a luminescent, white reception area. A work by the artist Robert Steng hangs on the opposite wall. Using reclaimed wood to build two-dimensional objects that represent three-dimensional spatial vistas, his creative approach towards reusability and spatial analysis is a fitting artistic interpretation of the studio’s guiding principles. The cubic, white reception desk located beneath two large light disks fits seamlessly into the white space. Two elements dissolve the reductionist nature of this space: An abstract wall graphic on the entrance wall to the studio points the way towards the creative department. In striking contrast to the white walls, the floor is fitted with a violet carpet displaying a check pattern of our own design. This effectively adds a softer, more cosy note to the precise clarity of the reception area.

Adjacent to the reception area is a large conference room, separated from the former by a glass wall. Large windows on two sides of the room ensure sufficient daylight, which filters into the room through diaphanous, white curtains. A cloud of delicate, white, spherical lights hangs suspended above the oval conference table. A cast-iron pillar, the exposed service pipes and the original ceiling have simply been painted white to retain the charm of the original industrial architecture. The small conference room next door is stylistically contrapuntal, offering the perfect setting for private, focused discussion. A round, white table stands in the centre of a room that is painted a deep violet. Above the table hangs an oversized bell light. The walls are chequered floor-to-ceiling with framed images of studio projects. A window that once opened to the outside in the guest WC is now back-lit and mirrored to offer a new reflective horizon.

The nucleus of the office is the studio. This space evinces the philosophy and principles of Ippolito Fleitz Group. Here people from different design disciplines work on projects in concert. The open-plan interior was specifically selected to encourage cross-pollination and creative intercourse, fostering an interdisciplinary design process.
The workstations are positioned at intervals along three work benches. The studio’s two managing directors work at the first, smaller bench. To engender greater transparency and flat hierarchies, the longest work bench with 12 workstations is but an arm’s length away. Parallel to this long bench stands a second long work bench offering a further 10 stations. A pendant luminaire suspended from the ceiling hangs over each workstation to provide individual lighting. Each luminaire can be operated using the adjacent ribbon of material. Each of the unique ribbons originates from a collection of decorative material collected over the past 40 years. Behind the workstations are shelving units with magnetic fronts. The materials, sketches and concepts posted here are a means of presenting projects within the studio, providing a starting point for collegial discussion.

To support a climate of collaboration, the studio as a whole offers many, very different zones for discussion. Within the studio space itself is a small conference corner equipped with garden chairs, as well as our favourite ‘mittelmöbel’ from the old office, newly veneered for its new home. This unit serves as a low-key meeting place and has remained a favourite spot for short, informal chats or for a birthday glass of champagne ever since the studio was first founded. It naturally had to migrate with us to the new premises.
A large, communal workspace presented an interesting acoustic challenge. In response, deep-pile carpets ensure excellent acoustics and a relaxed atmosphere. Long strips of digitally printed carpet sporting a bird of paradise design decorate the ceiling above the work benches. Between the two longitudinal girders that transverse the central axis of the room is mounted a ladder of white sound absorbers, which also function as a virtual skylight thanks to daylight-quality, fluorescent tubes installed in the gaps between.

A key aspect of work at the studio is working with materials. This is taken into consideration by a large shelving unit housing the materials library that delineates the space to one side. Samples being used in current projects are often displayed on the long shelving unit along the room’s central axis. In combination with sketches, renderings and plans, this surface becomes a permanent presentation space and a barometer for the progress of individual projects. The shelving wall hides the back office containing a workshop, print station and archive. To the right of the materials library, a door leads to the staff toilets, which are decorated with large-scale illustrations echoing the motifs of the ceiling carpets. Here a door to the outside has been fitted, where a terrace beneath an old cherry tree offers refuge to smokers and a chance to take a break in the great outdoors.

There is also sufficient space to unwind indoors. While the studio itself is an epicentre of productive activity, the adjacent salon is all about communication and inspiration. The latter can be sought in magazines and books in the library, which is housed in floor-to-ceiling shelves behind a large, triptych mirror that can be pushed to one side. In front of the library is an upholstered reading island, which is ideal for one-to-one discussions and telephone calls. The most important part of the room is naturally the kitchen, which is allotted great significance and ample space – something we have learned from numerous residential projects. The open kitchen is orthogonal to the window bank, flanked by a long table. This table is not only full during lunch hour, but also offers hospitality for client cook-ins and larger meetings. Another area of the salon is occupied by a large project table displaying material collections and collages and serving as an ideas pool for ongoing projects. A stellar fluorescent light provides optimum illumination for brilliant ideas and the plants hanging from the ceiling ensure you are never alone when you wrestle with a problem.