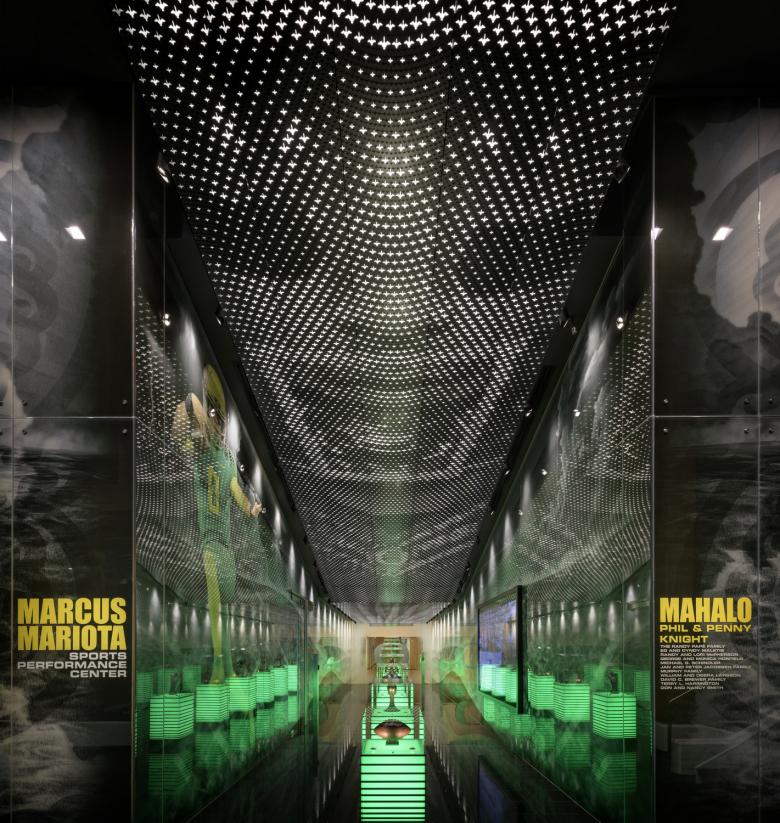 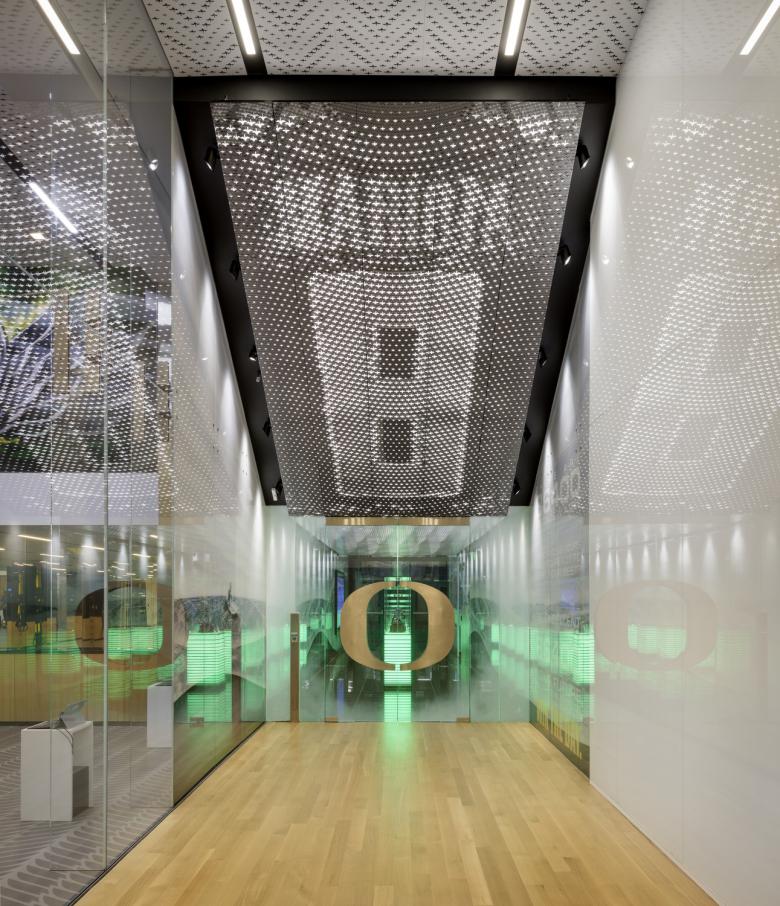 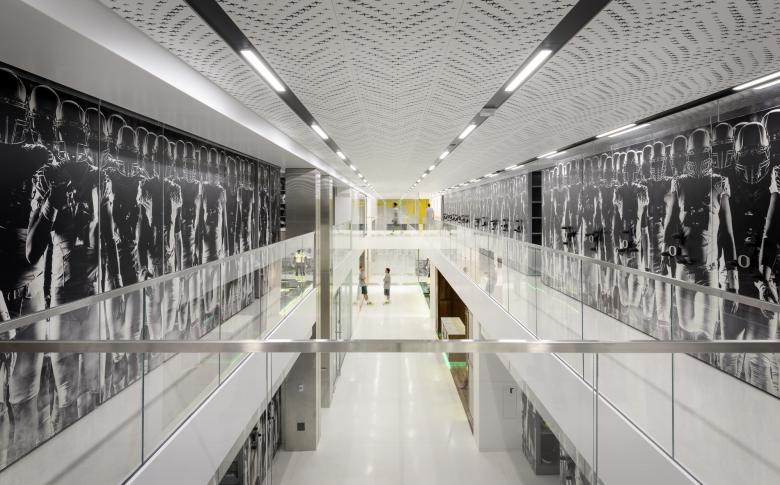 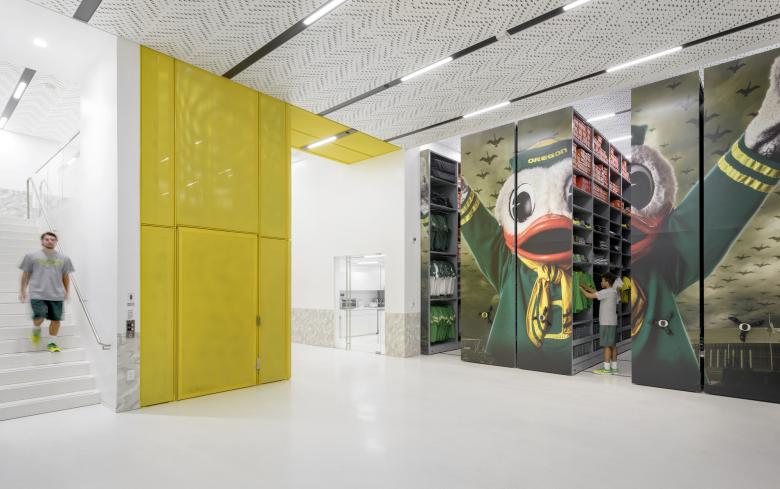 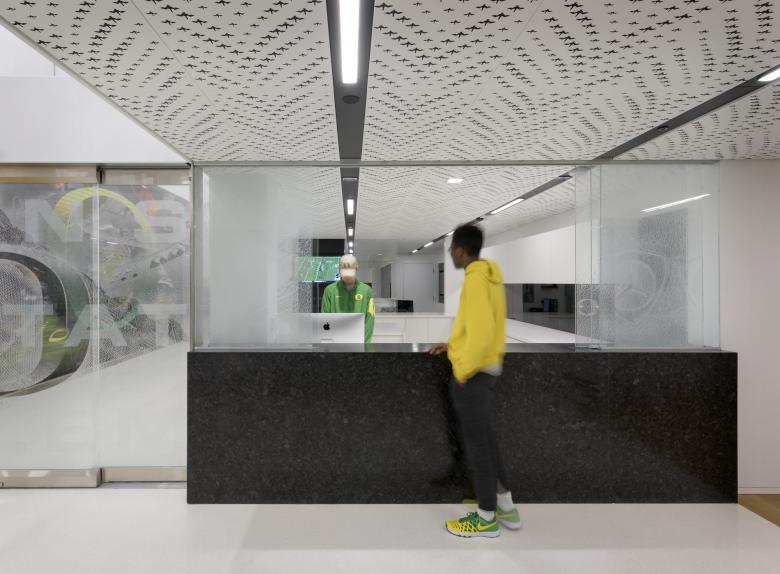 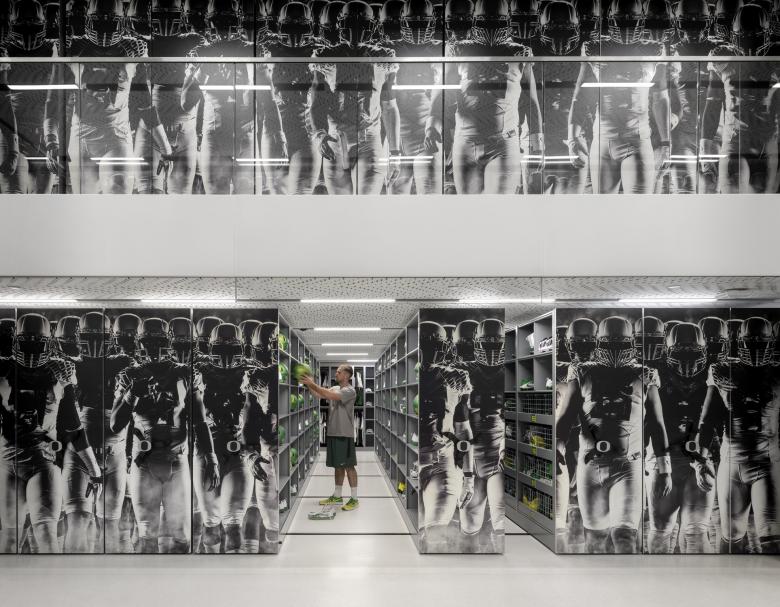 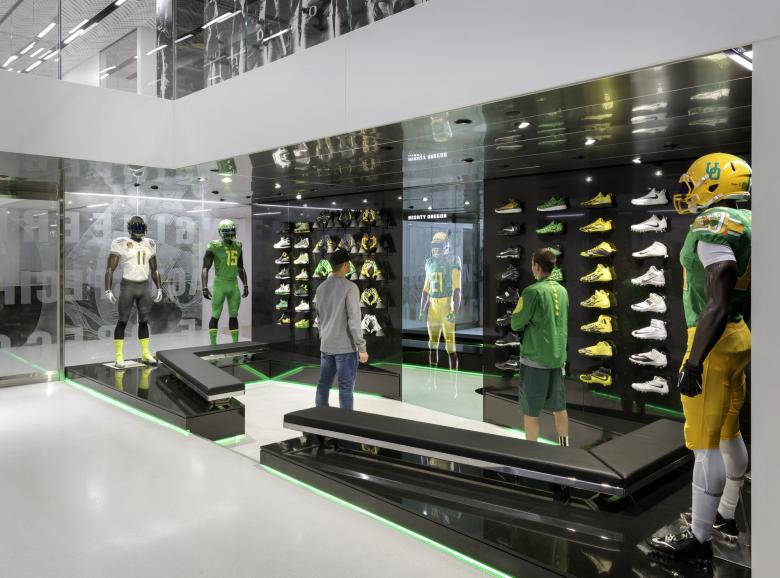 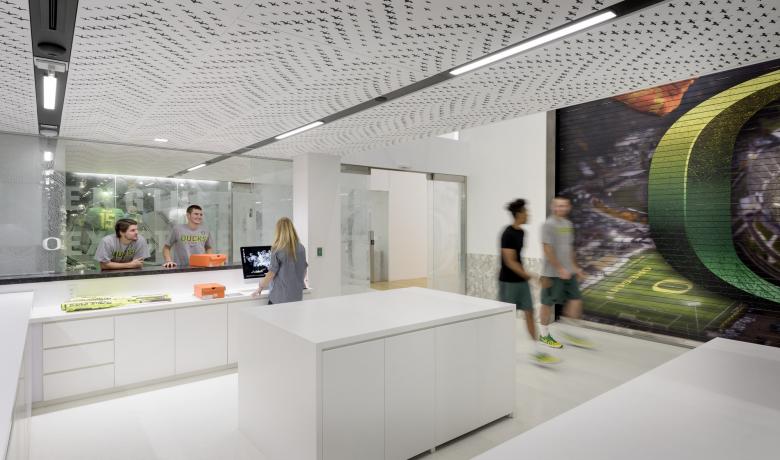 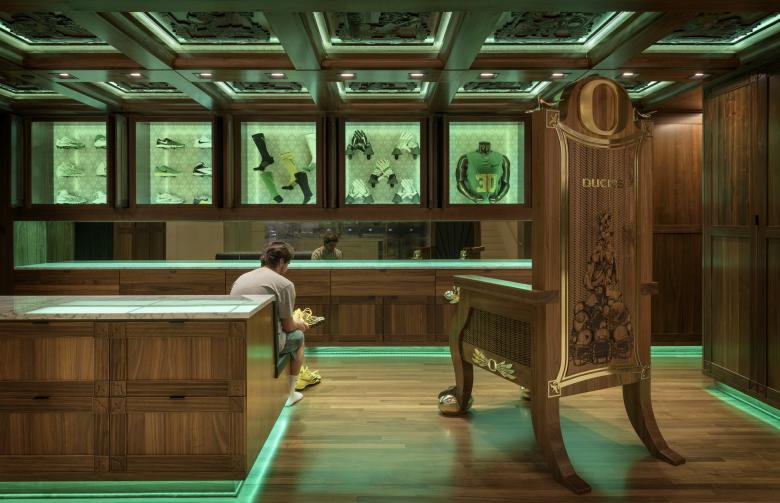 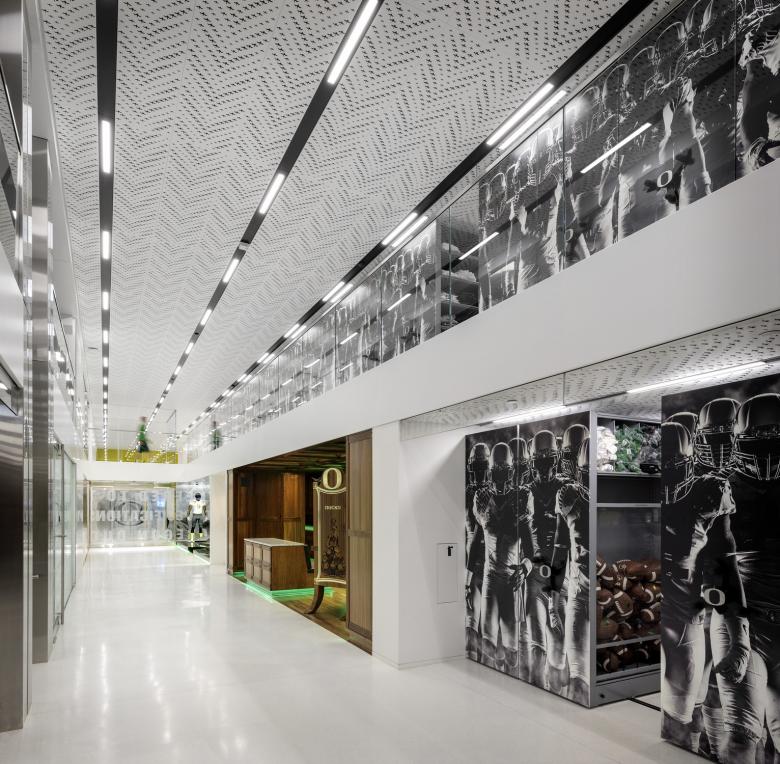 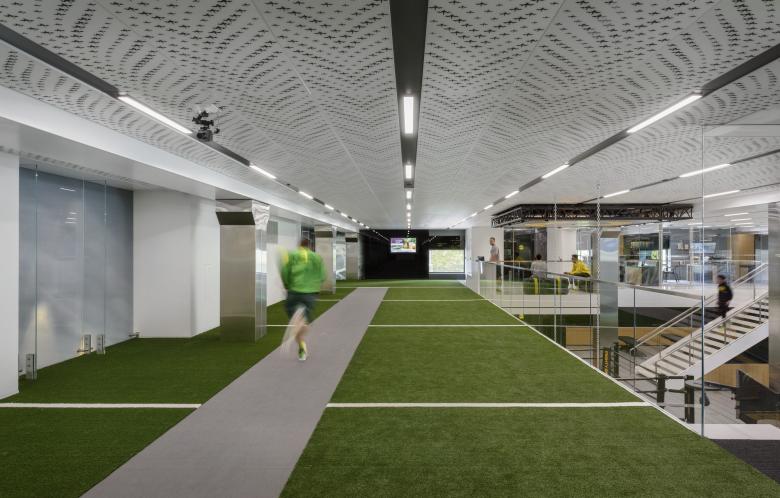 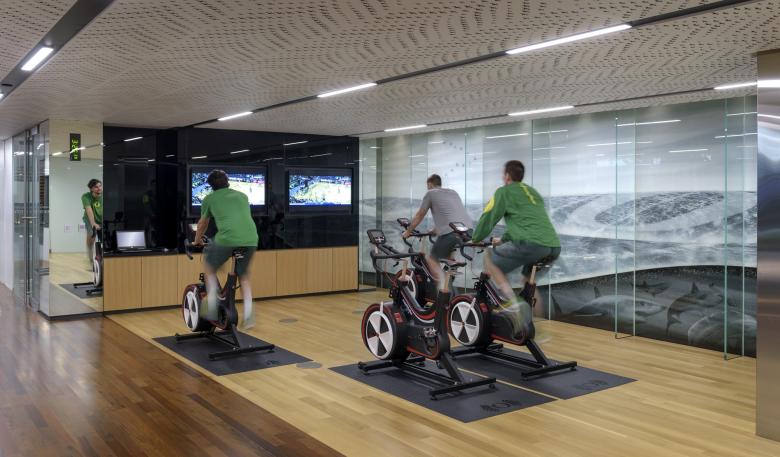 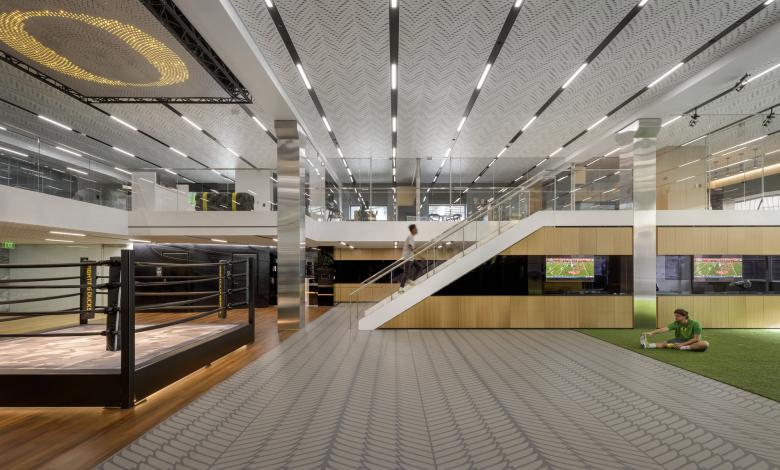 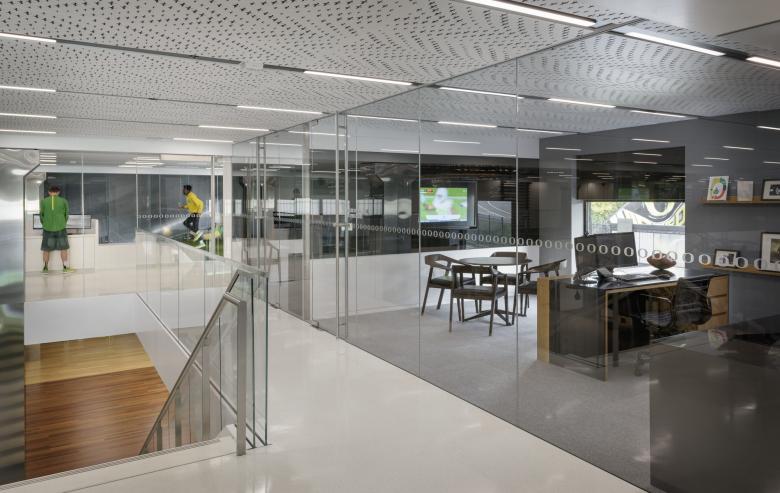 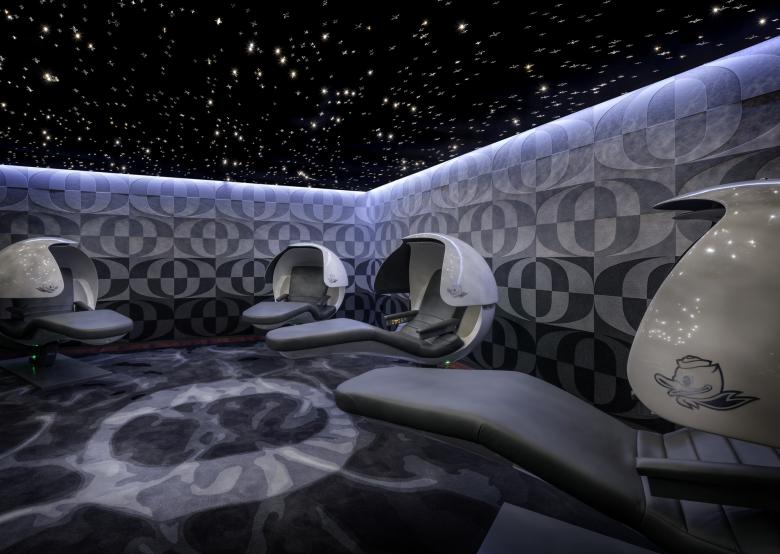 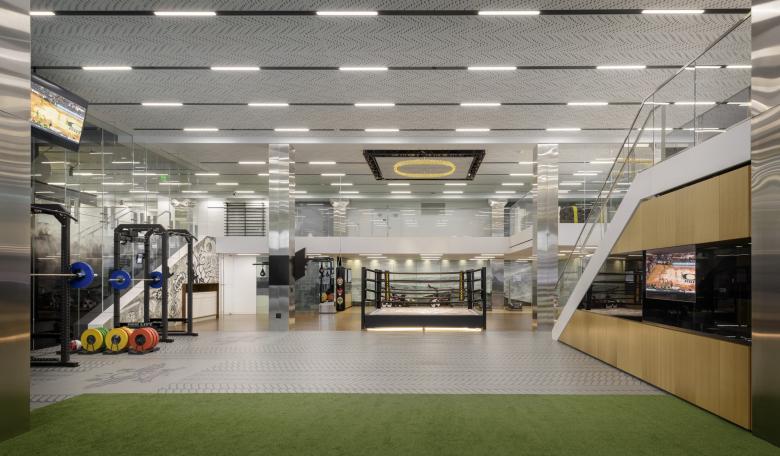 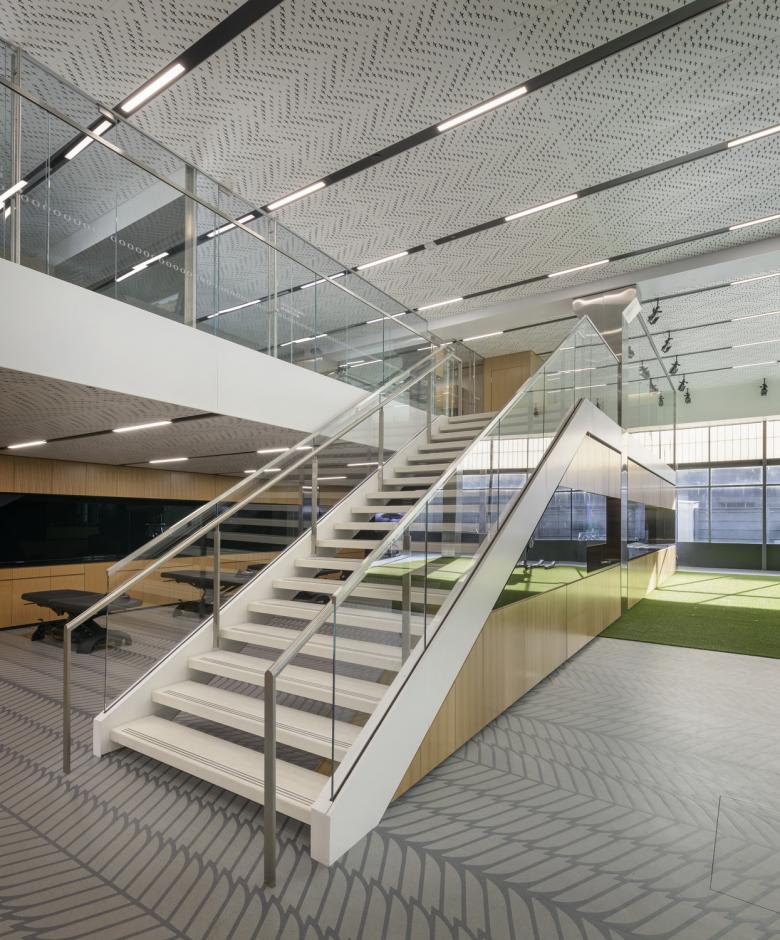 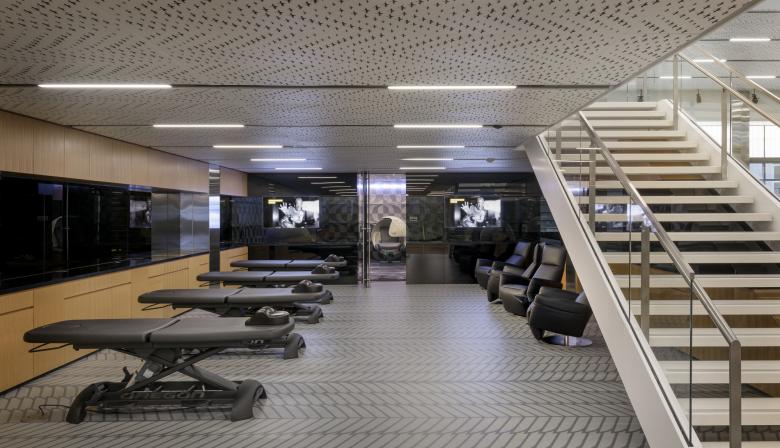 The Marcus Mariota Sports Performance Center combines sports performance, sports science, sports medicine and technology in one efficiently designed space on the ground floor of the Casanova Center. Another part of the project, the overhaul of the equipment room, is a testament to style and function.

The Namesake
Entering from the west, student-athletes walk into a trophy lobby that is a stunning tribute to the Sports Performance Center’s namesake. Trophies for the Walter Camp Player of the Year, Johnny Unitas Golden Arm Award, Davey O’Brien Award, Maxwell Award and Manning Award reside in the lobby.

One wall has a remarkable transparent LED flat screen television that alternately shows highlights of Mariota, and then reveals a shadowbox with memorabilia of his from Hawaii.

This inspiring entrance leads to the junction under a new skylight at the heart of the MMSPC, where innovations and applied science truly become the focus for Oregon’s student-athletes. Remarkable technology and efficiency of space in the 30,000 square-foot renovation are two of the most impressive byproducts of the MMSPC construction.

From that central hub off the trophy lobby, student-athletes will be just steps away from the new sport science and equipment areas, as well as the preexisting sports medicine facility and weight room.

The sports science unit of the MMSPC contains a number of areas where the technology of the new facility truly shines. Motion capture cameras and force plates are located throughout the space. The cameras are used to capture a subject while performing virtually any movement, ranging from sport specific drills to more traditional weightlifting. Utilizing force plates, the MMSPC staff can perform strength diagnostic tests to profile and identify areas of opportunities for each student-athlete.

There are three main components to the sports science unit: Recovery, Physiology and Movement.

Recovery
The recovery area is a multipurpose space, with a gray Mondo floor inlayed with Oregon’s well-known feather pattern, that focuses on recovery following a game or practice, be that via stretching or foam rolling. In addition, baseline measurements will be taken via a marker-less motion capture system to identify any deviations from a subject’s normal range, which can help identify where intervention needs to occur prior to injury.

Physiology
The physiology area is the most eye-catching with a small boxing ring for shadow boxing, complete with overheard ring lighting in the shape of a glowing yellow “O.” It is important to note that there is no sparring allowed in the boxing ring; it is for exercise purposes only. The area also features heavy punch bags, speed bags, exercise bikes, antigravity treadmills and strength diagnostic areas in the form of instrumented platforms. The physiology area also contains a bone density scanner and an examination room, as well as a neurocognitive center, which in part will help diagnose and treat concussion symptoms.

Perhaps the most critical component of the entire sports science area is that all of the information captured by the cameras and force plates will be fed into a computerized athlete management system that will provide data and feedback to staff and student-athletes on their progress. Using touchscreen technology located throughout the MMSPC, student-athletes will be able to track their workouts and see their results in real time.

Also located within the sports science space is a passive recovery area, where athletes can rest on recovery tables and utilize the popular pneumatic compression units, which assist the body’s circulation in order to speed recovery and decrease muscle soreness following a competition or practice.

Zzzzzz...
The most unique room in the sports science area is a small, warmly lit room with five sleep pods where student-athletes can come and rest in between practices or meetings. Recent studies involving members of the athletic department have highlighted the crucial role that sleep plays in performance.

New Equipment Room
The Ducks’ rebuilt equipment room utilizes space in a way not previously done in college athletics, while at the same time providing visual fireworks that will catch the eye of student-athletes and fans alike.

The Armory
The ingenious helmet wall, located in a room called the Armory, has the ability to display numerous helmets worn by the UO football team. But the hidden treasure is that the wall opens up into shelving that has room to store several hundred helmets, as well as facemasks and other parts. The Armory is also a helmet construction workshop with overhead pneumatic drills and easily accessible components, meaning a NASCAR-like repair or rebuild of a helmet is now possible.

The Uniform Display Wall
The sizzle of the equipment room is a display area that features a wall of shoes, gloves and uniforms. Student-athletes can step into a sunken alcove where a one-of-kind mirror will digitally display their likeness in a variety of Oregon uniforms.

Storage
Overall, the new equipment room has 2.5 miles of shelving, and makes the most of the area’s 19-foot ceilings through the use of a customized shelving system built by SpaceSaver Inc. The 16-foot shelves that slide on a system of rails are the tallest, most distinctive customized system SpaceSaver has ever built for an athletic equipment room.

The Haberdashery
Down the hall in the Haberdashery, there is also an oversized armchair, complete with web foot legs – an Oregon spin on the traditional claw foot leg – with “fighting Ducks” attached to the ends of the arms, where student-athletes can test out the latest footwear offerings from the equipment room.

Equipment Storage
The new equipment room not only houses football gear, but also baseball, lacrosse, soccer and acrobatics and tumbling.

There are also lift systems for the storage of the equipment room’s laundry baskets, as well as for the trunks that the equipment staff pack for each road football game. The laundry facility, called the Pond, has also been upgraded to allow equipment staff to complete up to 500-pounds of laundry at once.

Other Projects by SRG Partnership