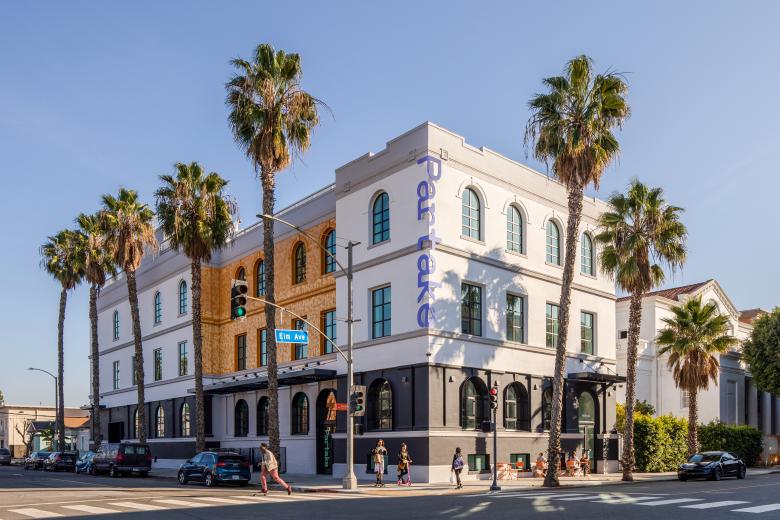 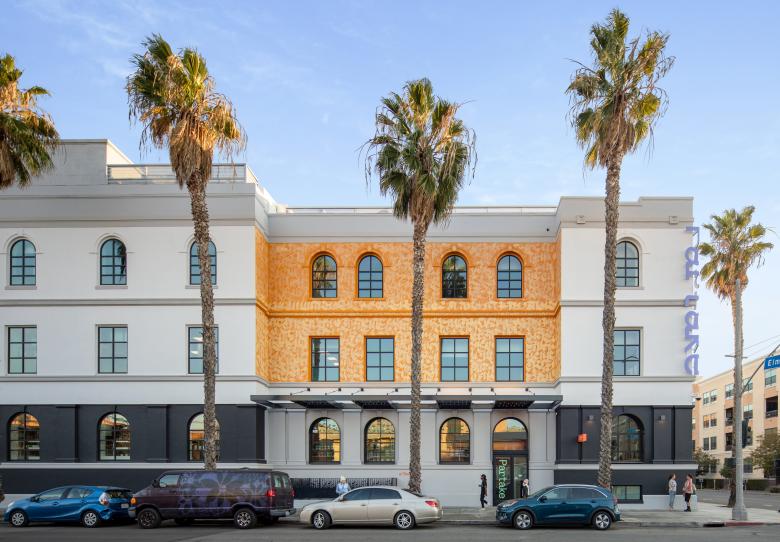 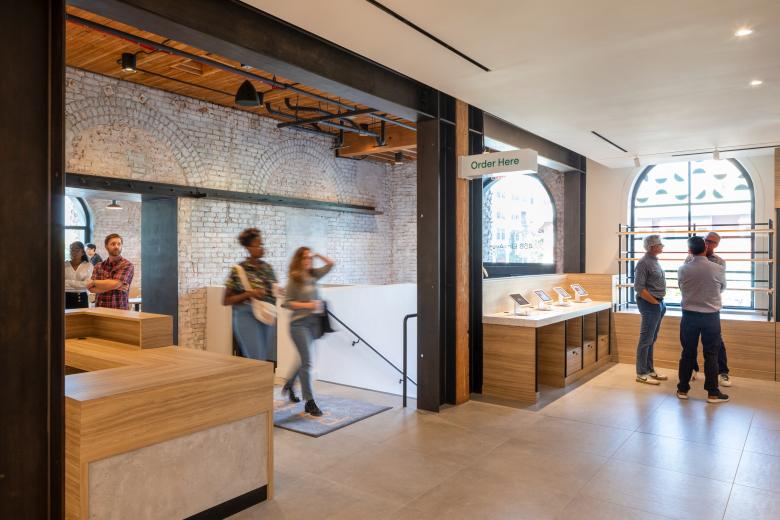 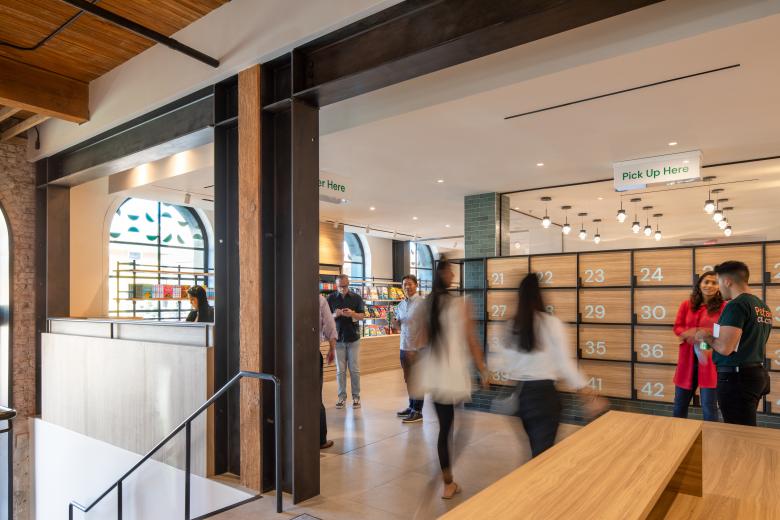 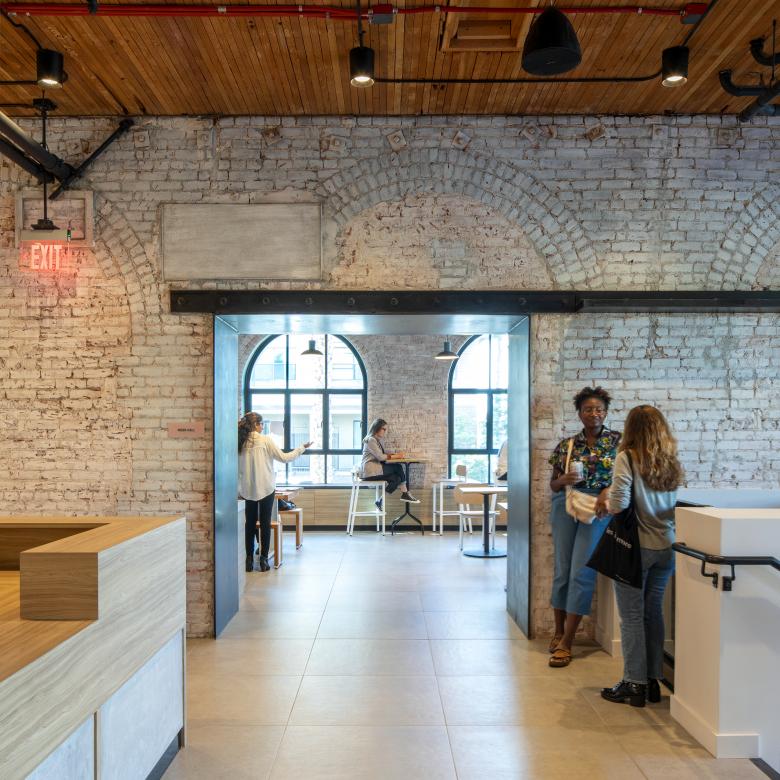 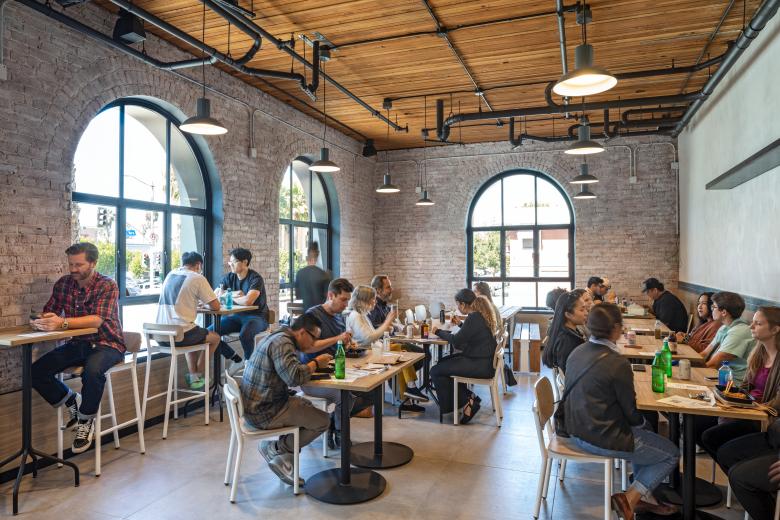 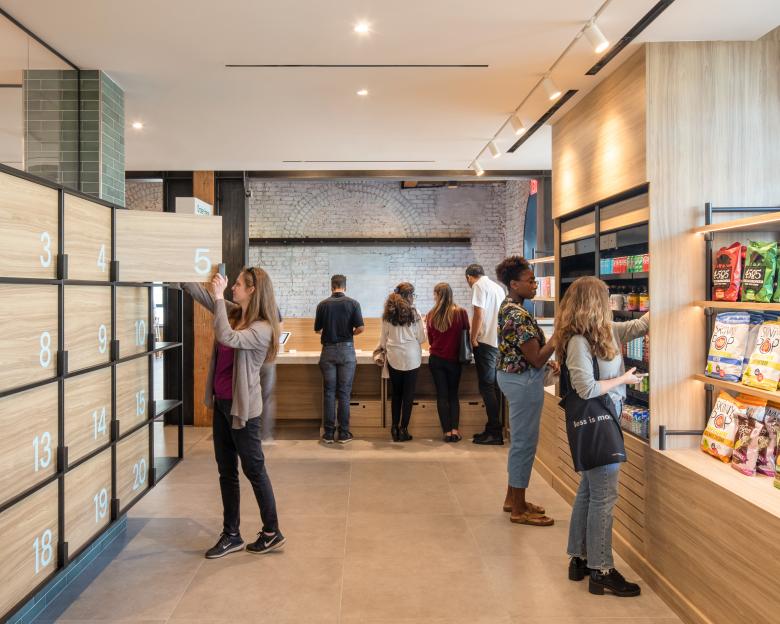 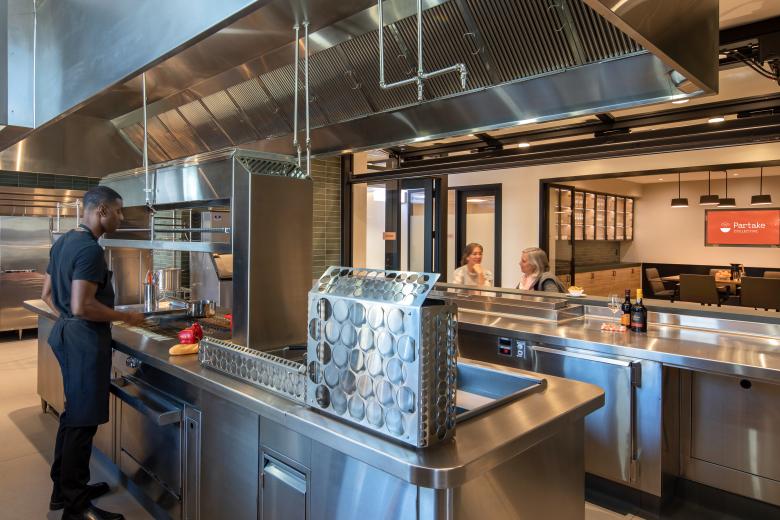 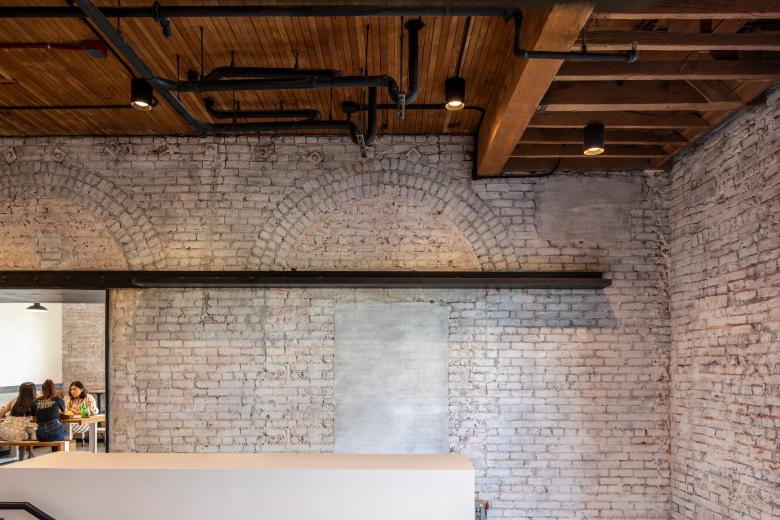 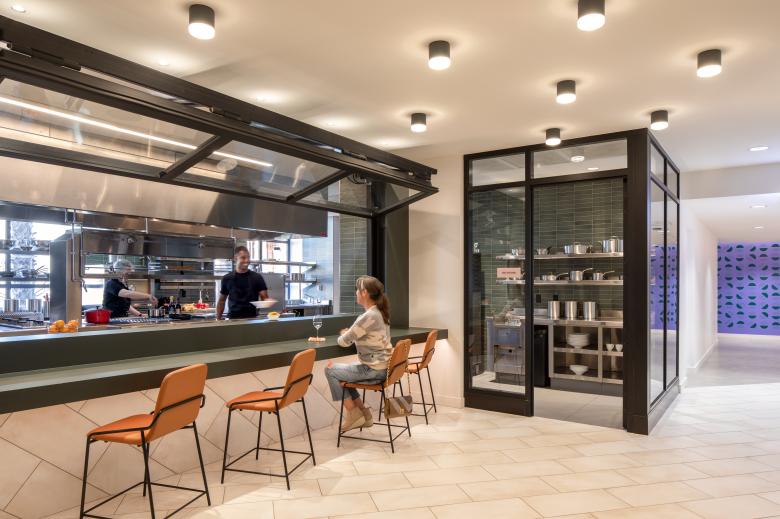 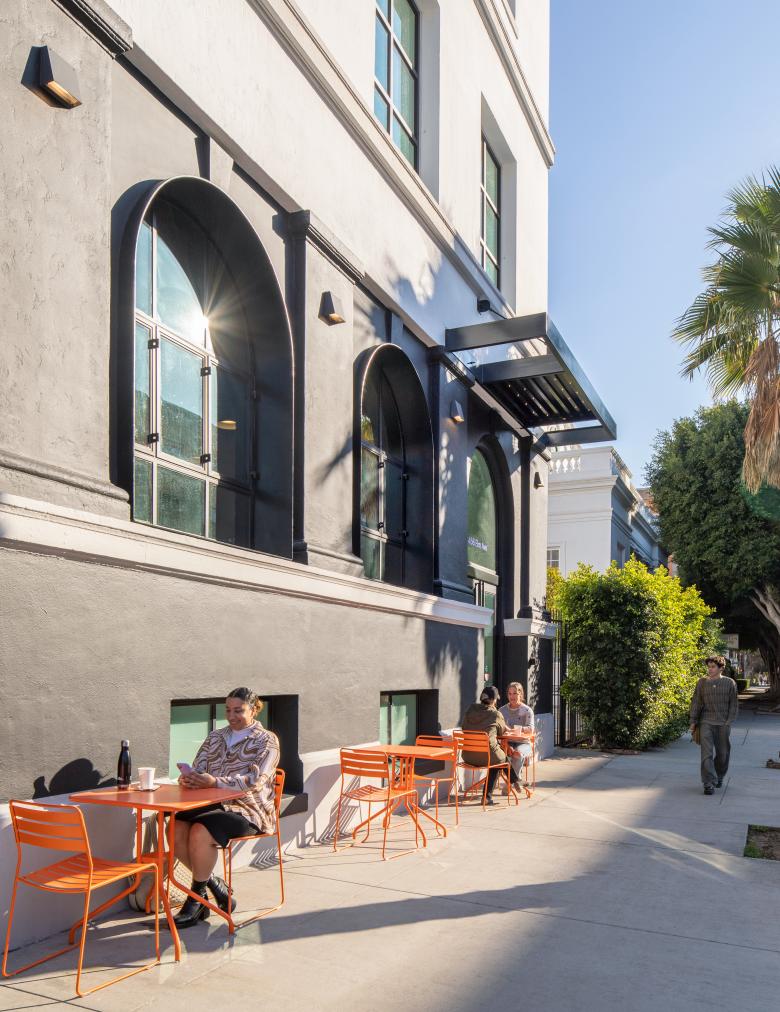 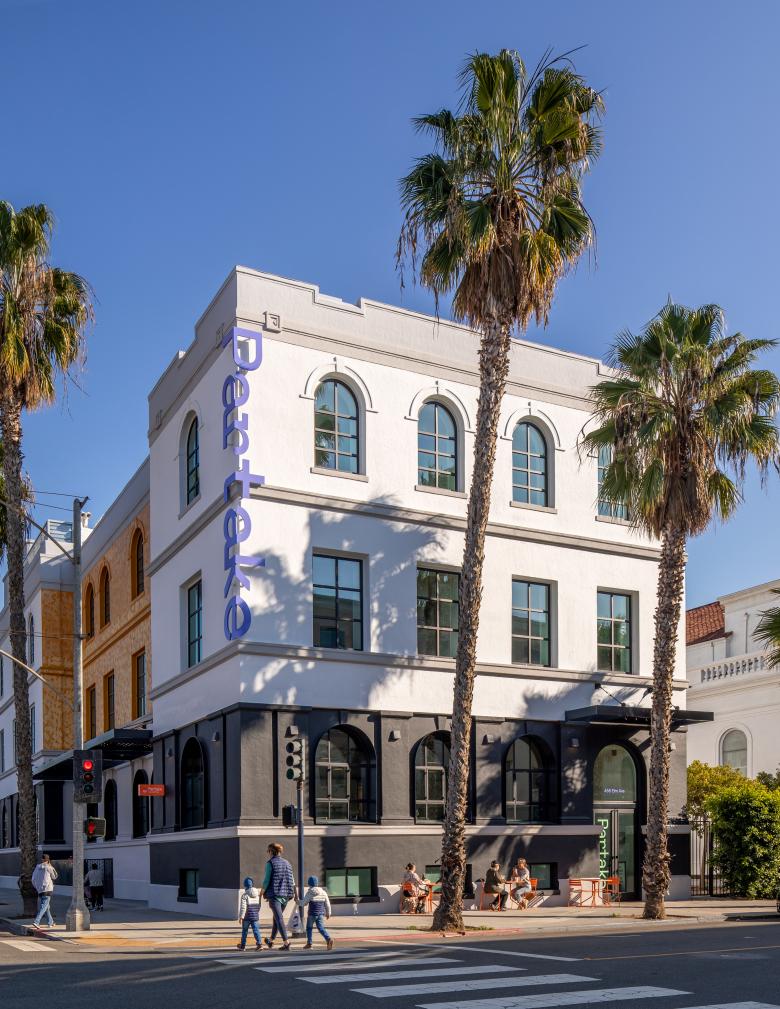 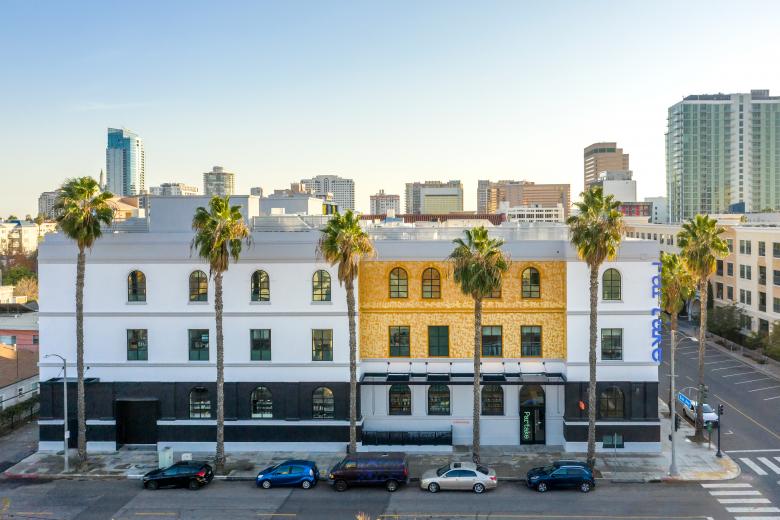 Studio One Eleven has designed the flagship ghost kitchen, dining hall, and market space for Partake Collective, a minority-owned company focused on providing access and opportunity for entrepreneurs to launch, grow, and expand their culinary businesses. The mission of Partake Collective is to create an entrepreneurial ecosystem whereby small business owners can start, launch, and expand their food-based concept by using resources that include kitchens, food prep spaces, retail, and pop-up restaurant and bar spaces.

Known simply as Partake, is housed in a 1922 brick building that was originally home to a Pacific Bell switchboard, and more recently an office for a local non-profit. Located in the historic East Village Arts District in downtown Long Beach, Partake offers customers the option to support local businesses via food delivery or by dining onsite in a communal food hall, outside on the sidewalk, or in a soon-to-be-completed bulb-out. A bulb-out leverages excess street space and converts it into people's space resulting in additional outdoor dining nestled in the landscape. Bulb-outs support walkable communities by providing shorter pedestrian crossing times while in the street reducing vehicular wait times.

An adaptive reuse of two underperforming office buildings, the project includes three floors and a basement contributing to a significantly lower embodied carbon. The original building was constructed out of heavy timber while the second was poured in place concrete. Studio One Eleven bridged the two structures by installing ramps connecting the different floor levels and arranging kitchens around the freight elevator and skylight stair core. Large openings were cut in the existing masonry to achieve structural retrofitting, resulting in framed interior portals. The existing heavy timber, steel, and concrete structure with brick infill were retained and exposed in public areas. Original materials are juxtaposed with exposed modern steel structure frames, blending the historic with the contemporary. Reusing the buildings allowed the shell+core work to achieve both LEED and Well platinum certification.

Studio One Eleven endeavored to make as light an intervention as possible on the exterior to celebrate the facade and retain its connection to the neighborhood. The original large arched windows and doors at the street level have modern steel shrouds incorporated into the openings to provide shade and frame views from the inside. Signage was added in a playful contemporary manner to distinguish it from the restored historical elements.

A large mural was installed on the north elevation to further highlight the main public entry, sponsored by Long Beach Walls, which oversees annually the installation of large-scale murals from internationally renowned artists. Influenced by the food prepared inside, the artist, Imagine, created a mural inspired by the ancient spice turmeric. The spice, popular around the globe, has been used for flavor, color, and health benefits for centuries. The yellow/orange color represents organic turmeric and is inspired by the artist’s grandmother grinding the spice in Nepal India when she was a child. Food is a wonderful way to bring people together, and the warm colors of the mural support an inviting guest experience, serving as the community’s place for nourishment.

The design focuses visitor activity on the ground floor around a central retail amenity that has direct pedestrian access from both 5th Street and Elm Avenue. The pick-up zone features a retail kiosk for operators to sell packaged pre-made goods in addition to their in-house culinary creations. A completely automated ghost kitchen system delivers orders made online via an app to cubbies and lockers.

The project is built on a model that promotes social engagement and community building, rather than focusing strictly on food preparation for delivery-only meals in an isolated drab industrial setting. Partake Collective is committed to being an active and engaged member of the community by working with local educational institutions to support pathways to private enterprise, business ownership, and job opportunities for the most underrepresented communities. Partake Collective has partnered with the culinary programs at Long Beach Unified School District’s Browning High School, California State University Institute for Innovation and Entrepreneurship, and Long Beach City College to support students’ passion for the culinary arts.

The team has transformed an inward-focused office space into an accessible food and beverage destination for downtown Long Beach’s burgeoning downtown district and its residents. This not only serves residents but supports small creative restaurateurs who are eager to expand their businesses. The goal of this model is to create a benchmark for future development and food service industry entrepreneurs that celebrates food diversity and enhances community building. Commercial kitchen tenants include Mochi Dochi, Cena Vegan, Bubu Teriyaki, Cave Prime Steak, Vegan Thai Kitchen, Meals Dot Kom, and Thai District. The show and communal kitchens have proven to be in high demand.

Studio One Eleven is also currently designing another adaptive reuse for Partake in Glassell Park that is expected to be completed in 2023, with other locations under consideration throughout Southern California.

Other Projects by Studio One Eleven