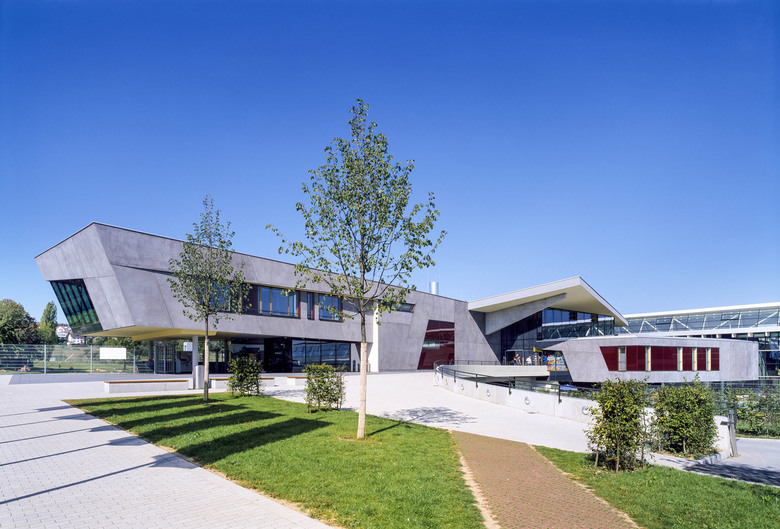 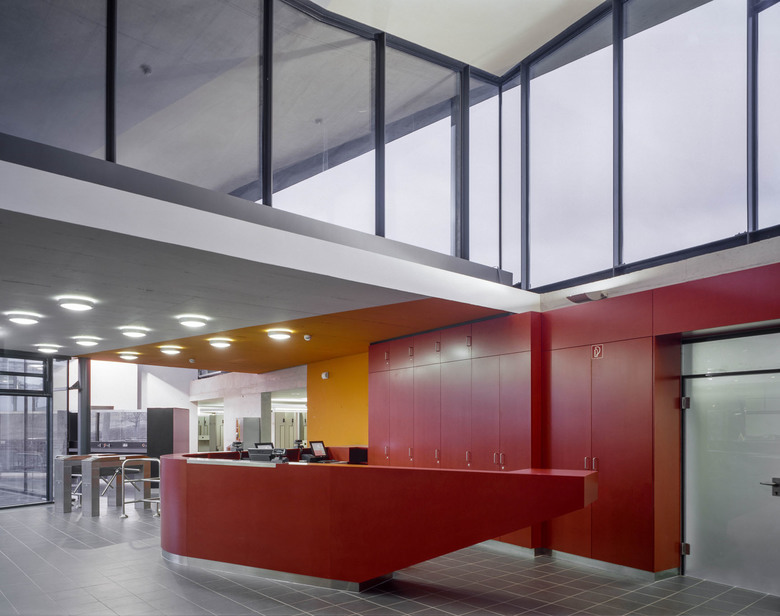 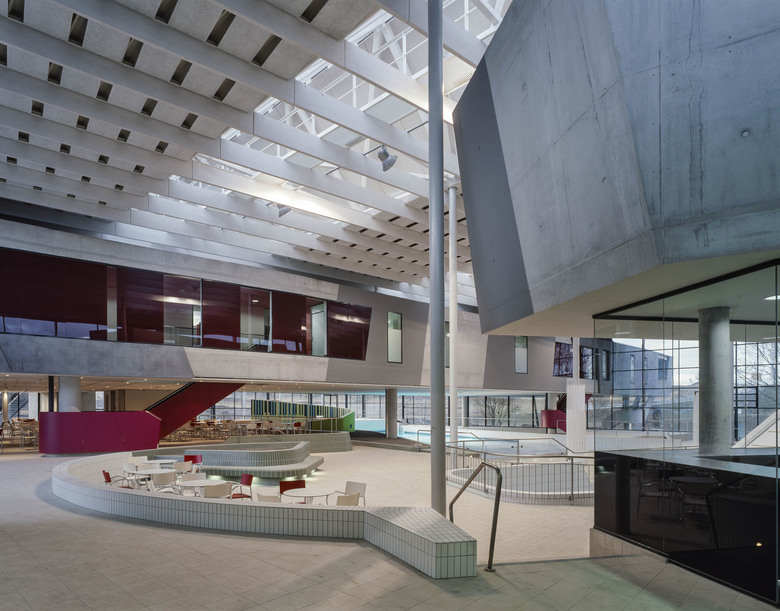 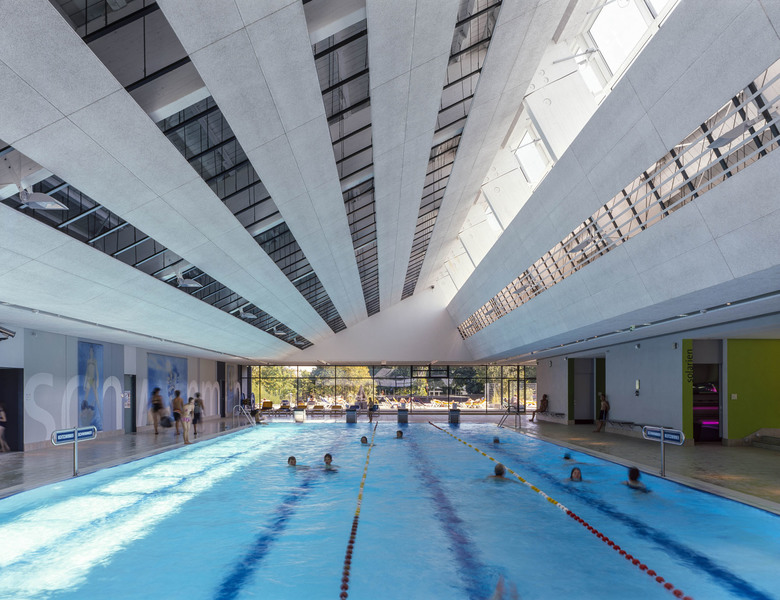 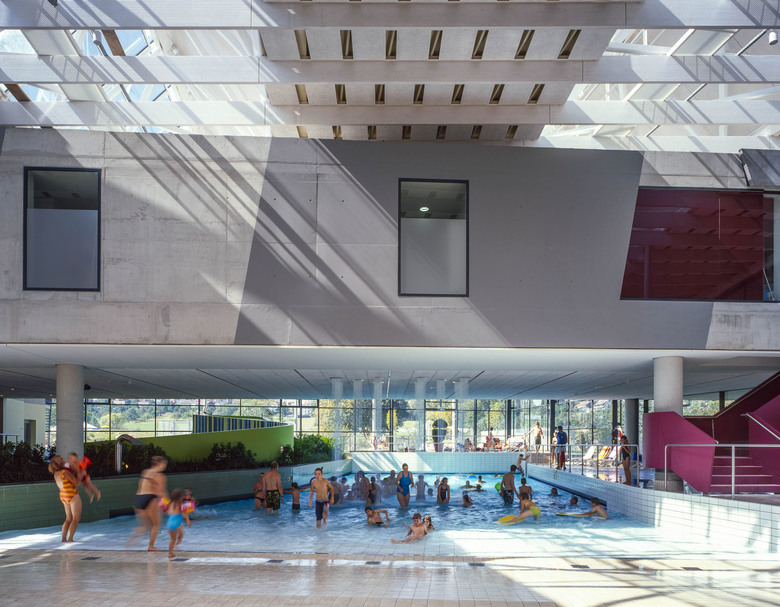 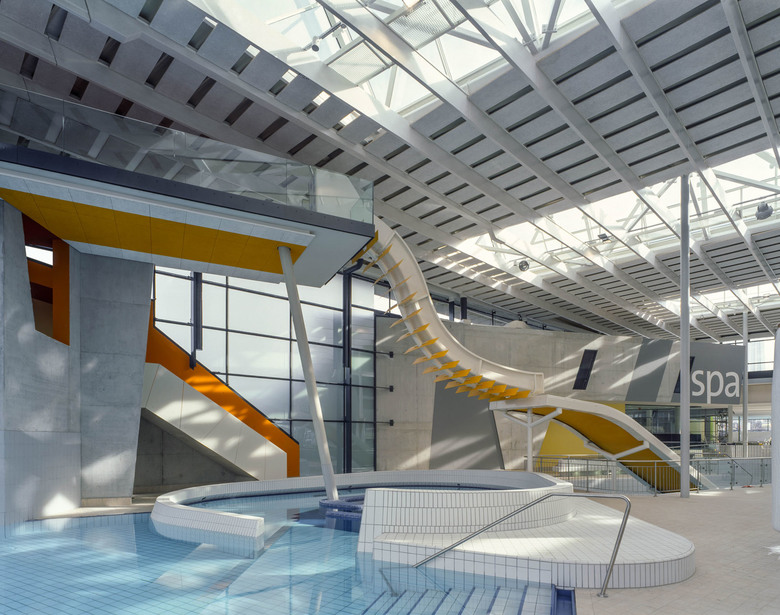 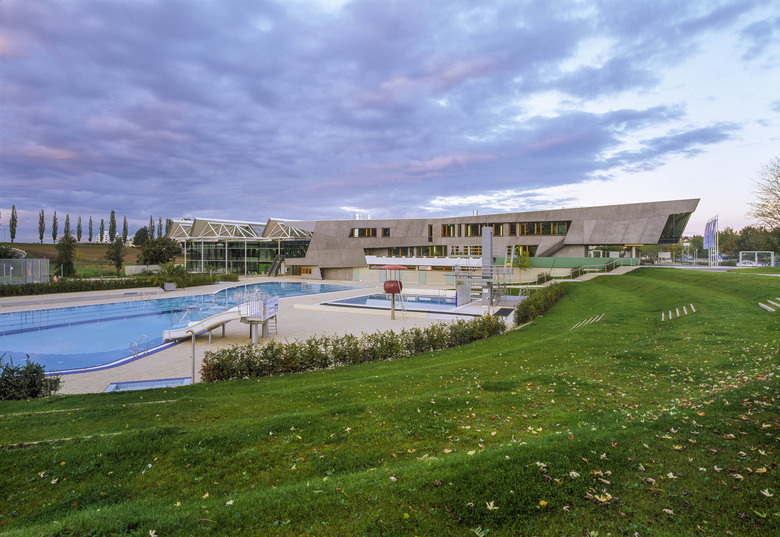 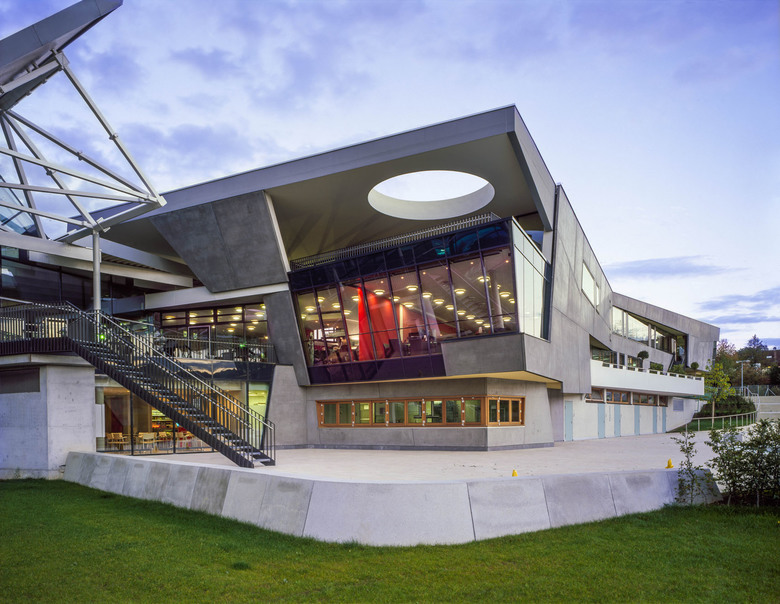 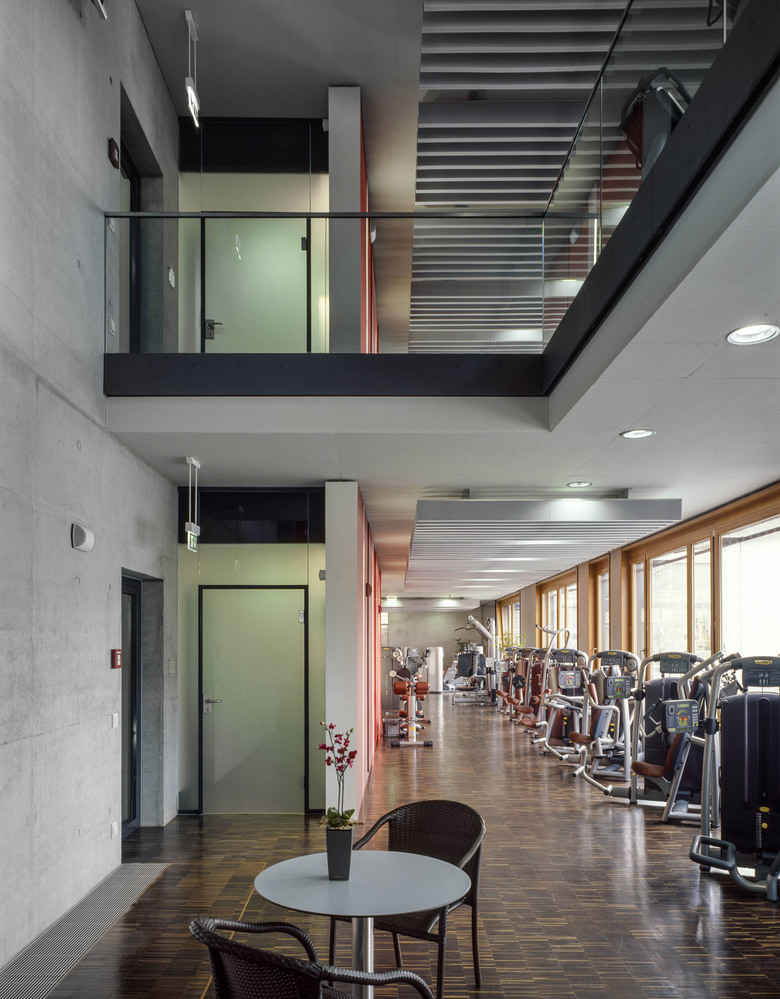 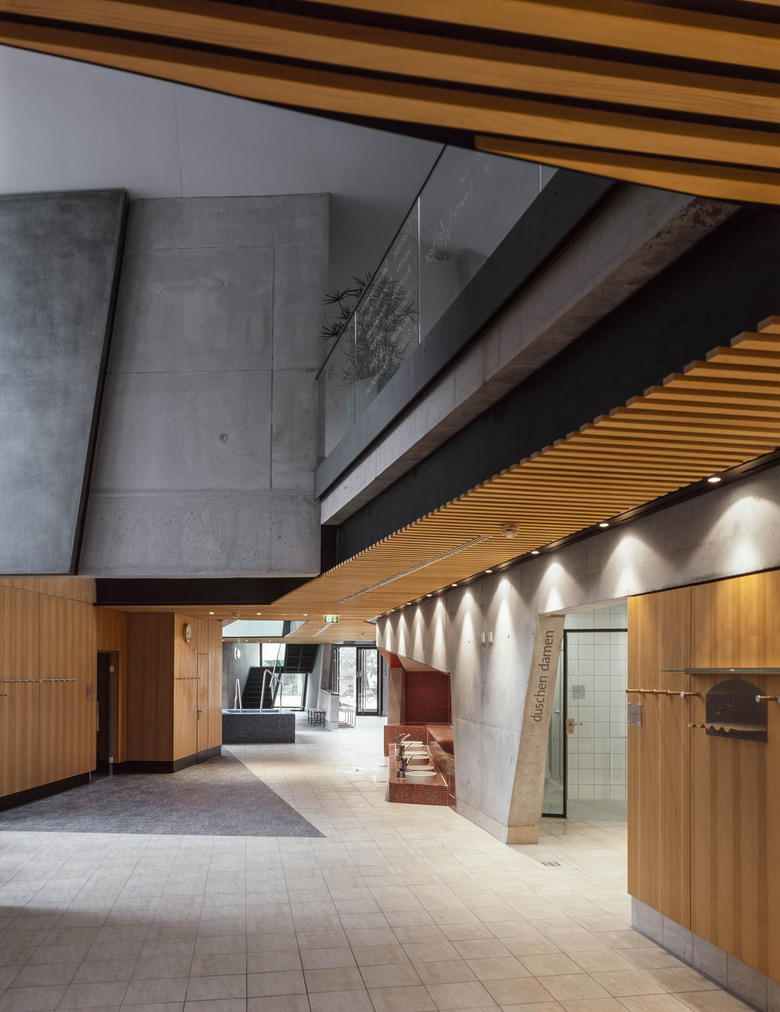 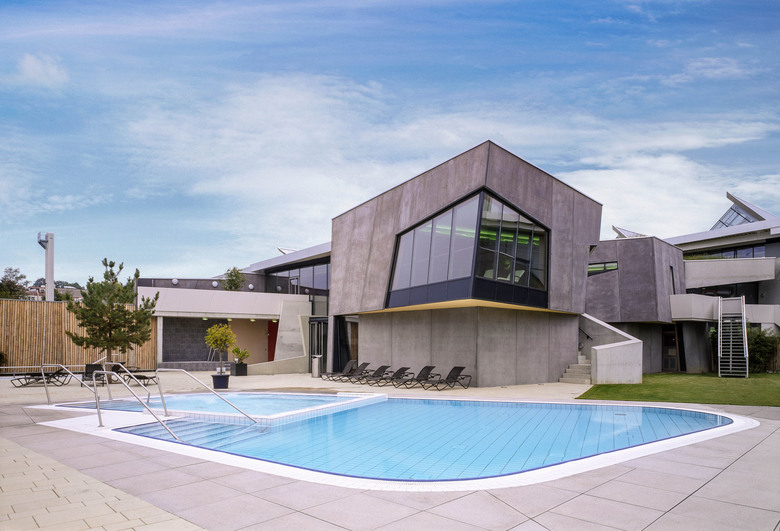 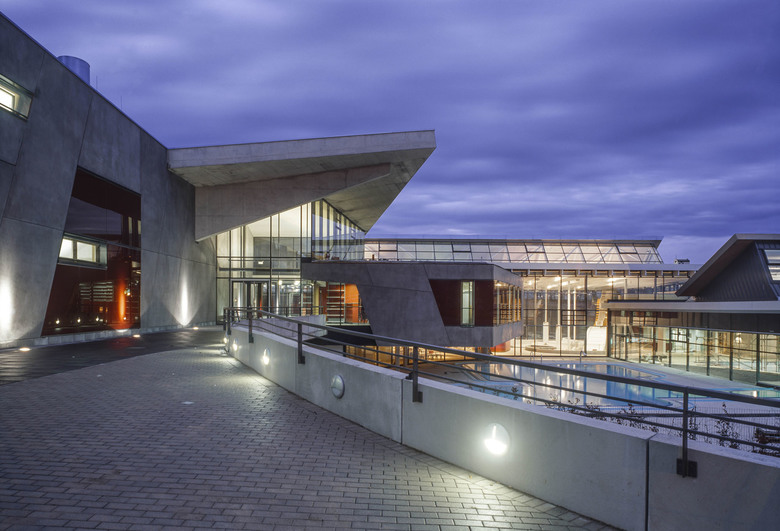 The “Fildorado” was built in 1970 and was one of the first adventure pools targeted towards families in Germany. The original buildings as well as its surroundings all looked the same and one could not make out any particular order. It seemed that over the years, the buildings grew accidentally and without design context. Therefore, based on its necessary renovation, the decision was made to expand the swimming bath consequently by indistinguishably incorporating the existing parts into its addition. After a two year construction period, the new Fildorado presents itself as one unit and significant building and outstanding attraction south of Stuttgart despite its size.

The visitor looks at a vast cohesive adventure pool incorporating the existing parts. Flowing areas that still have different layouts with transparent transitions between inside and outside make the visit an adventure. All in all, one finds a large pool area with lots of attractions including a sport and thermal bath as well as a big food area. In addition, there are an exclusive fitness club and wide wellness area with more introverted rooms inside and outside. The building is completed by an outside pool with large spreads outside that are defined by thorough landscape architecture.

The new Fildorado is distinguished by a long bridge-like connecting element located on the west side of the property. It creates the link that connects the different parts of the new baths. At the same time, it still leads the visitor into the building where the new entry is located with all the serving functions (changing rooms, cashier, shops, office, kitchen and so on). This gesture of connection, development and maintenance frees the swimming and sport areas of functional constraints and serving parts. Leaving the foyer, which is the meeting point, the visitor arrives at the changing rooms that are “floating” bridge-like over the pool area underneath. In the north, the changing room area sticks out of the façade of the building. But the vast entry building also includes the access to a modern and exclusive fitness club over two levels with roof terrace and view over the outside pool areas in the North.

The landscape swimming area of the water park follows the natural slope topography of the exterior area. By floor-to-ceiling glazing which go easily interlock from the interior to the exterior. The swimming hall was enlarged to north from the existing building. The new building attains a maximum exposure and insolation from east and west and the orientation was reduced to the north. Significant south-sheds provide additional insolation. Various use areas such as restaurant, children's area, deck and rest area, different water areas and water attractions give the landscape differentiated atmospheres. Among other things, there is a wave pool, a flow channel, as well as several large slides. In addition to two tube slides - a black hole slide and a tire slide - there is a novel jump-street slide. The existing sports spa by the old Fildorado, with a 25-meter pool, the thermal pool in the outer area and sunbathing and relaxation area with tanning was de-bathing in the new landscape involved. Old and new merge into an interior single unit.

The sauna area is opened up by the water park. On two levels there are arranged saunas, rest areas and a sauna bar. The levels are linked through a void. On roof level a sun deck is located in the outer area between the roof through the emerging green sauna bodies. North and East of a generous open space is a sauna with additional outer sauna-carcasses and outer pool, limited by an earth wall. North of the earth walls is the newly created public works yard with garages and covered with wood storage space.

In addition to the internal offering was also renovated and expanded the open area of the Fildorado. Preservation was only the diving tower with tanks. The other outer area has been completely redesigned and only the foundation of the 50m basin was adapted. According to the interiors, it also offers new attractions. As in the spa area, there is a public pool in the outside area and the lawn of an earth wall belt surrounding designed landscape focus and the different areas.

The old parts of the Fildorado were core redeveloped and only in their basic shape. The basic construction of the new parts of the building is mainly made of reinforced concrete. Only the roof of the bathing hall was made in a steel structure. The vast areas of the facades were covered in concrete-clad prefabricated parts. A total of about 275 products with different optimal blanks were processed, the construction of the new complex Fildorado shows an uniform image. To the offers of the bath to be clearly visible, got individual stations in the interior area (children's area, diving tower and rest areas), the "hot spots", an atmospheric colour recognition value. They are a guide, but also a spatial enhancement within the open pool area.