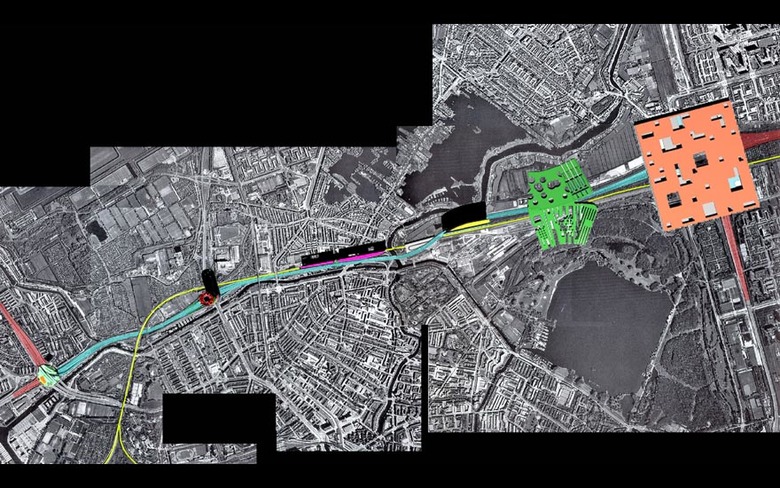 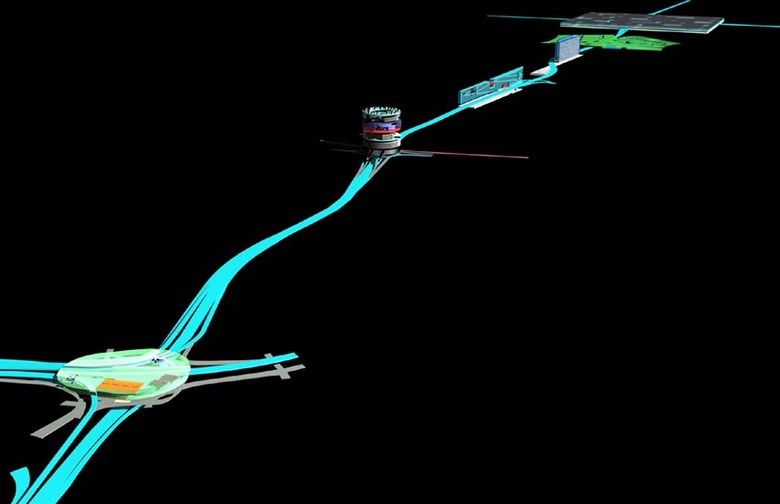 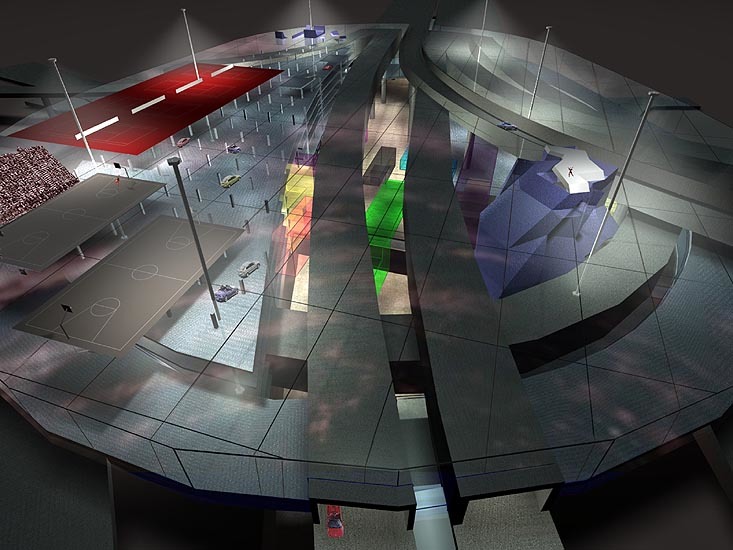 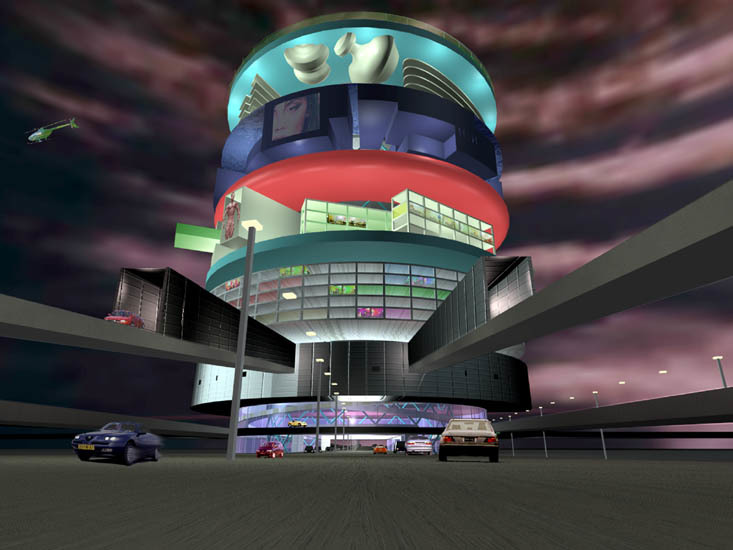 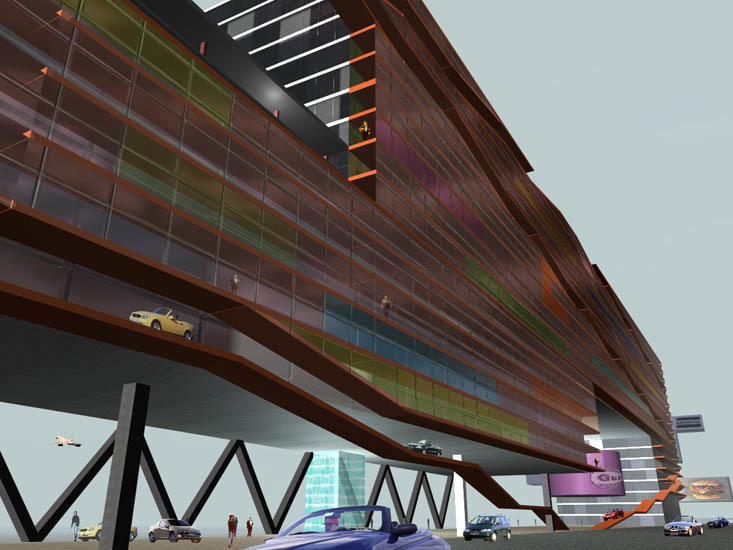 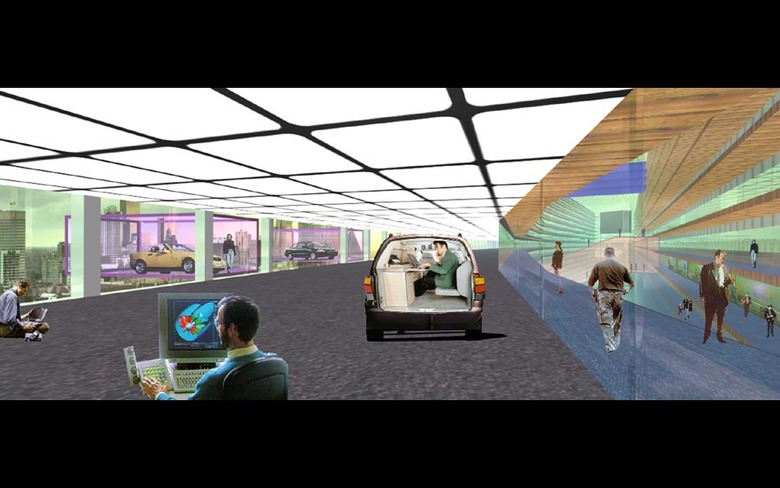 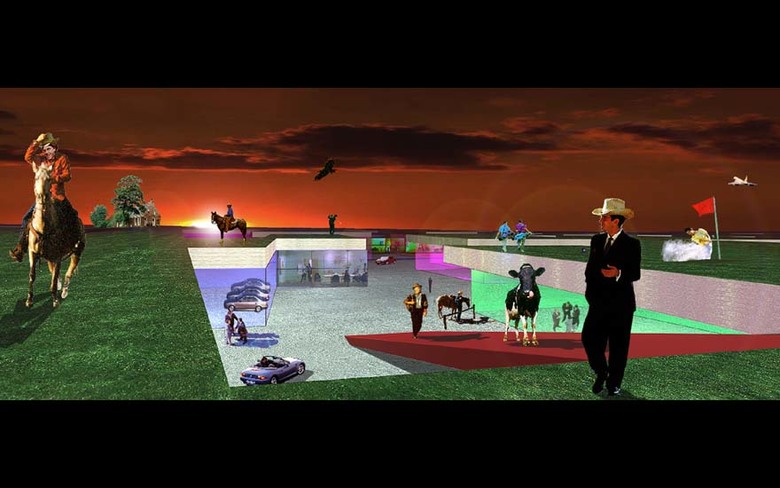 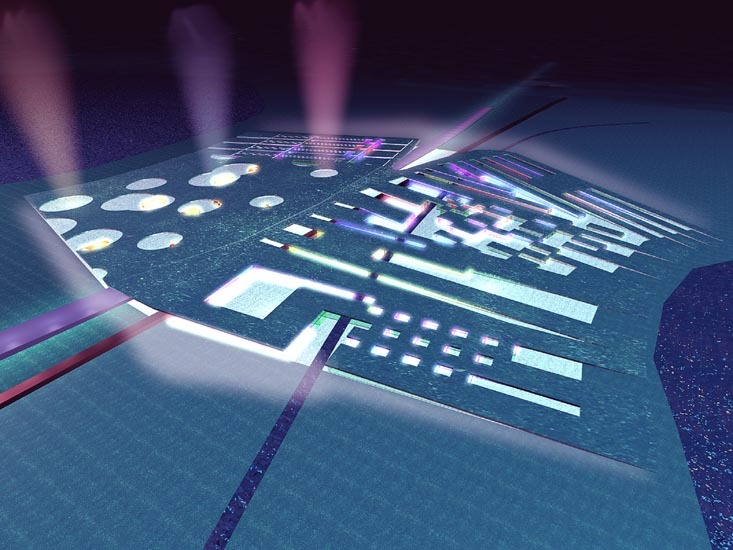 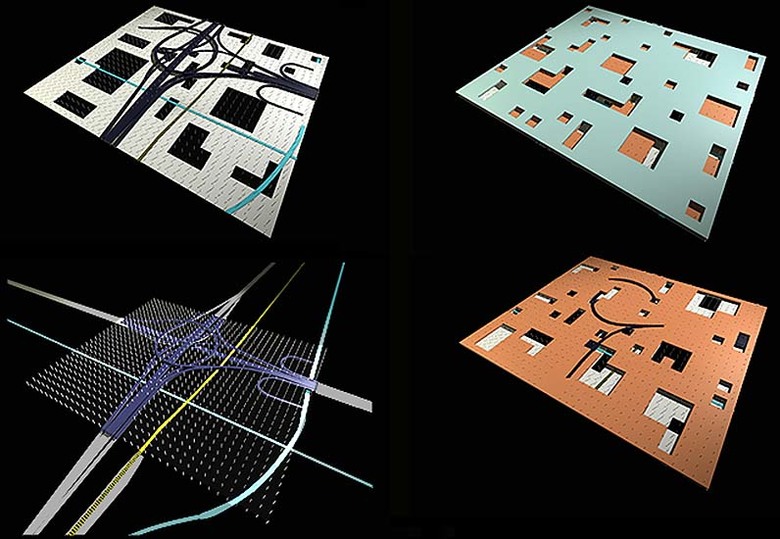 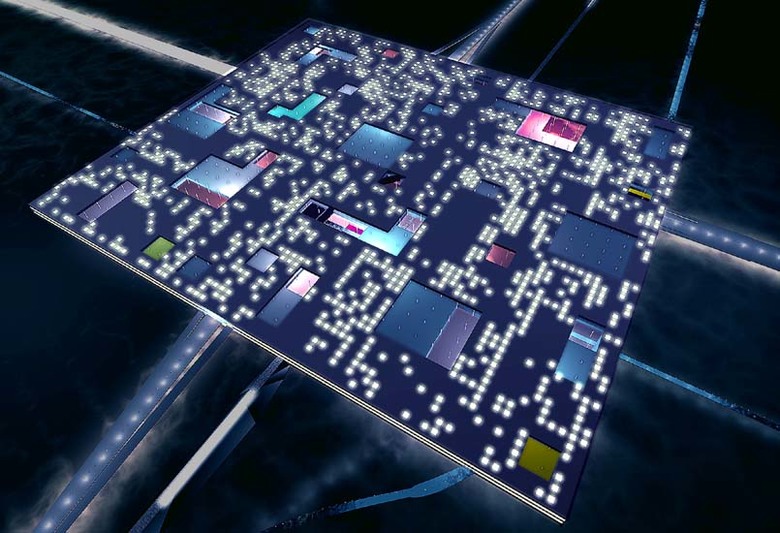 Design: Monolab. Team: J.W. van Kuilenburg, L. Veeger, W. Hoogerwerf with W. van Alebeek, R. Jansen, K. Klinkers, R. MacRander, A.J. Oudijk. TEST CASE. In 1997/1998 Monolab made an independent study into the programming of urban vacuums, empty zones along heavy infrastructure. The A20 highway, which functioned as a test case, is the northern part of the Rotterdam Ring, a bundle of infrastructure in a context of high compression. Had this research been executed in accordance with current laws and regulations, an impenetrable mountain of limitations would have emerged. So we approached the research from the opposite side in order to reveal the potentials of infrastructure. The six locations in the A20 context serve as typological examples for many comparative situations in Holland. FUSION. We are living in an era of interlace. In this early research, vacuums have been discovered where fusion takes place: the intertwining of program and infrastructure in conditions of high compression. As fusion creates new programs and performs best with flexible and variable programming, the Infrabodies are organised neutrally to allow absorption of a wide variety of programs.

KLEINPOLDERPLEIN - 100.000 m2 COMPRESSED INTERCHANGE. The overpasses in this compact interchange are first encased within tubes, including free space for future extension, whereupon the complete interchange is wrapped in a glass skin. Because the flat volume cannot be subdivided, an interior is created for urban events, like a centre for body culture. The present roundabout at ground level unlocks this Infrabody. The barrier of the subsoil A20 is neutralised by lowering the main floor of this Infrabody. As a result, the A20 tube is physically suspended in space and it can function as a programmatical ‘bridge’ with a pedestrian boulevard on top.

SCHIEPLEIN - 150.000 m2 URBAN TURBINE. This Infrabody is also contextual in the sense of its outer limits: the shape of a roundabout suspended over the A20. Buildings are stacked in a brutal and simple way. Infrastructure penetrates the stack and is totally interconnected by prosthetics, linking the interface to the highway. The tramway punctures this interface and a helix brings vehicles to a height of 140 m. The central atrium is suitable for the more closed programs. Each building performs its specific and visible structure. There are voids between the disc-shaped buildings that have two functions: transitional zones for structure and public lobbies for visitors. The lobbies are visual keys to the internal structures of the stacked buildings and can be programmed, for example, as squares, urban swimming pools or golf links.

BERGWEG - 380.000 m2 TILTED CITY. The most important crossing below the A20 is at the Bergweg, at a concentration of public transport. The context offers a very narrow and stretched profile between rail and highway and the huge compression enables a colossal program. The result can be regarded as a tilted city, a vertical frame that absorbs various programs including infrastructure. Public buildings are suspended in vertical squares. The length generates a double use of the facade zone: sloping infra channels interfaced with the highway, and an eco sunscreen of vertical greenhouses offering shade, humidity and oxygen for the programs behind. This Infrabody is situated on a vast plinth with deck a that connects A20, Bergweg, railway and station. Plinth and deck connect both separated city parts on the North and South sides and offer a mega-window to guarantee views from the surrounding city.

The parallel interaction of highway and railway generates a shrapnel-shaped Infrabody of such dimensions that it creates a huge atrium building, the biggest in Europe. Programs in its interior colonize the neutral shrapnel: vehicles on the outside and people at the atrium. Gondolas travel vertically as well as horizontally along the structural facade grid, carrying cars and contents to co-ordinates, addresses. Cars are then shifted inside; this type of Infrabody can be considered as a huge neutral parking structure that can be programmed with various functions.

ROTTE DELTA – 550.000 m2 PARALLEL SOILS. The most positive, and at the same time, most tragic property of the City Ring is its seperative character. Along the Ring we can find hidden sites with qualities of a natural paradise. One tragedy of Rotterdam is its denial and subsequent destruction of its natural native area: the little River Rotte. Here infrastructure (A20 and railway) has amputated the city from its womb. To restore initial qualities, a parallel soil is pulled over the infra-barrier. Shallow distribution programs can nestle in the space below this bridged delta, perforations allow sunlight and air into this parallel world. The evolution of the working class hero becomes real: the Randstad cowboy combines interim management in the morning with ecological farming in the afternoon.

TERBREGSE PLEIN – 5.000.000 m2 NON-BUILDING. This site is exemplary of the many big cloverleaves; spread out so extensively by traffic speed that they can be considered landscapes. Terbregseplein absorbs heavy infrastructure casually by way of the definition floor-or-no-floor. A package of 3 x 2 sandwiched floors makes big spans possible. Thus a stack of different worlds emerges: structureless landscapes versus structure-jungles. To escape from all limitations, infrastructure is cased in tubes and is given free play to penetrate the floors wherever necessary. Accessibility is provided by existing on and off ramps. The floor fields can be fertilized like landscapes by programs + air + sunlight through macro- and micro-perforations. Programs create their own ecosystem in this neutral environment of floors and column grids.