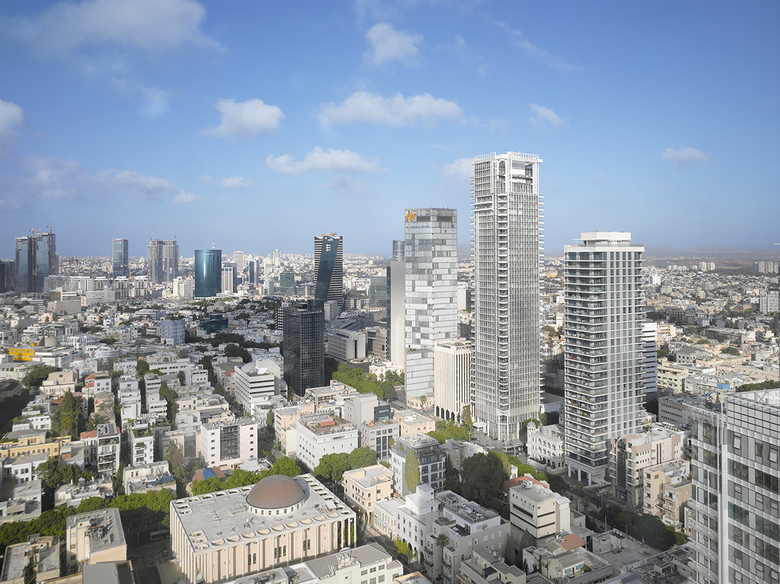 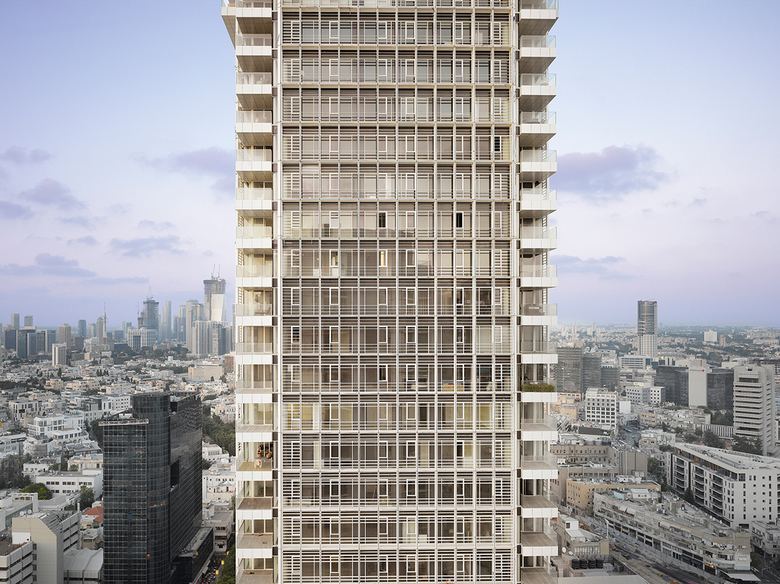 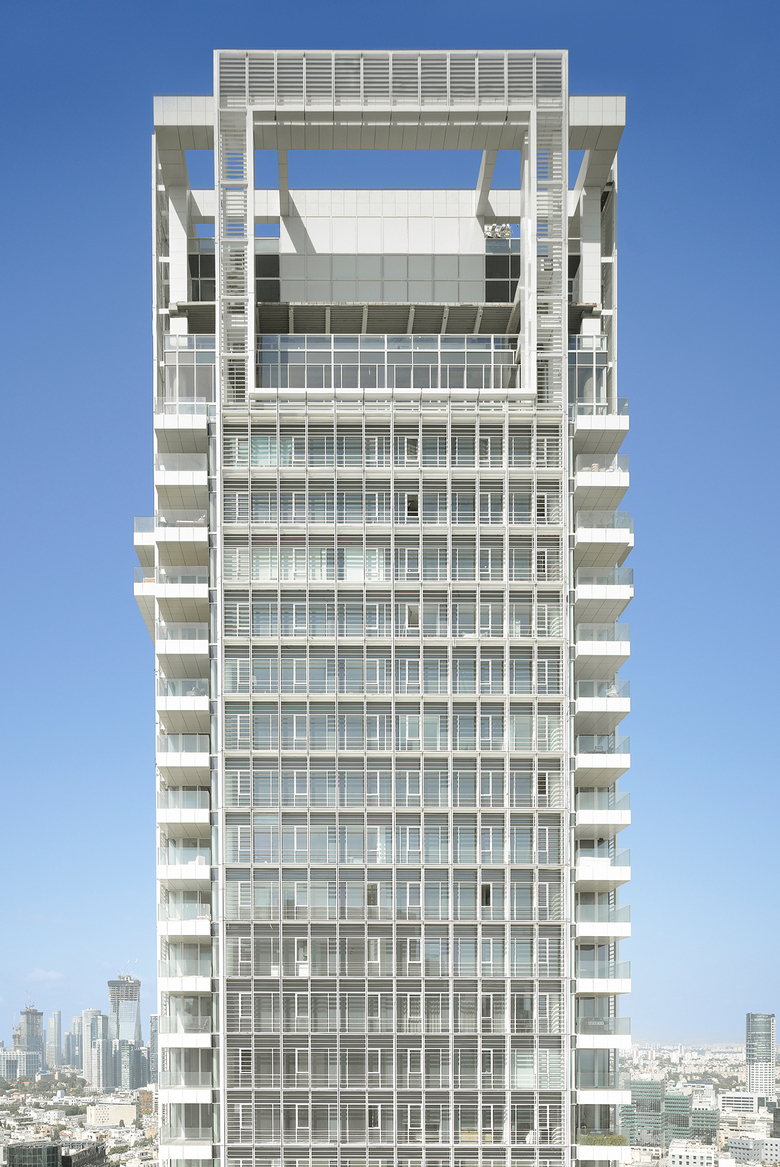 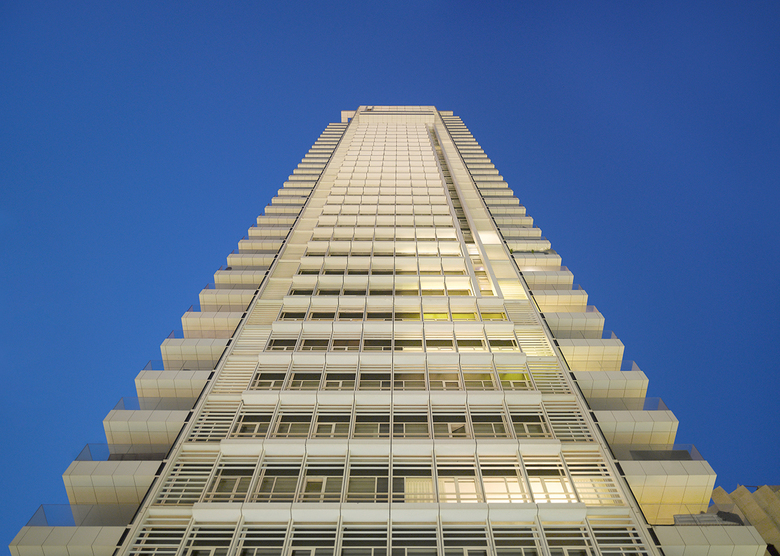 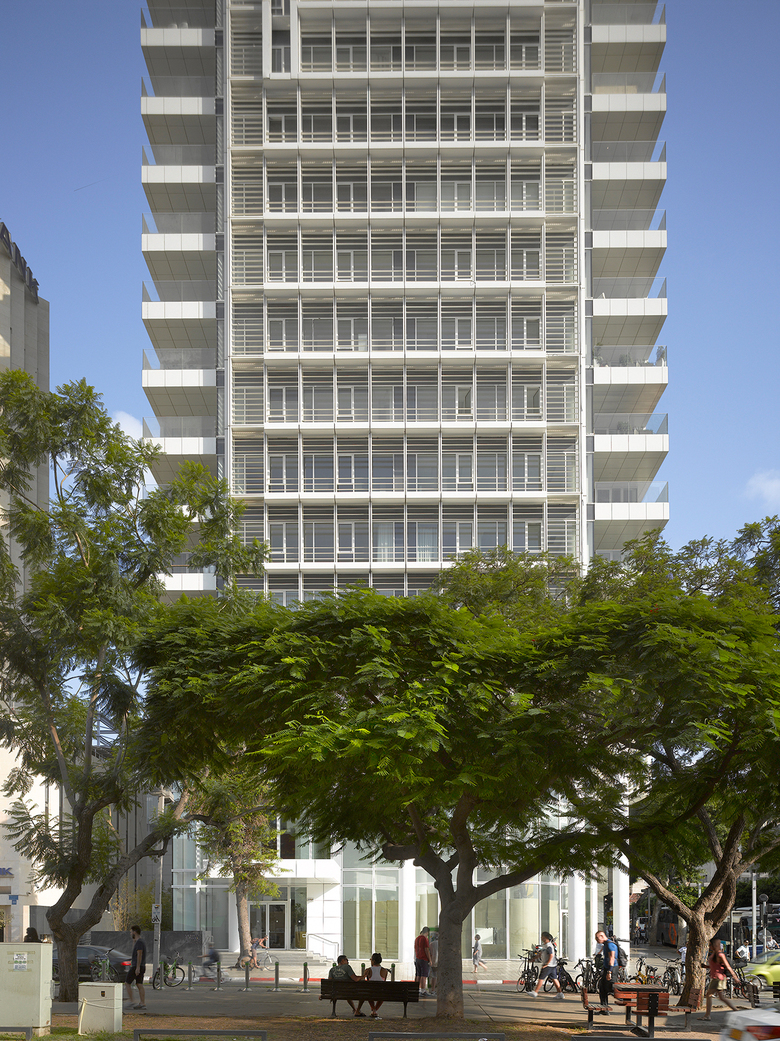 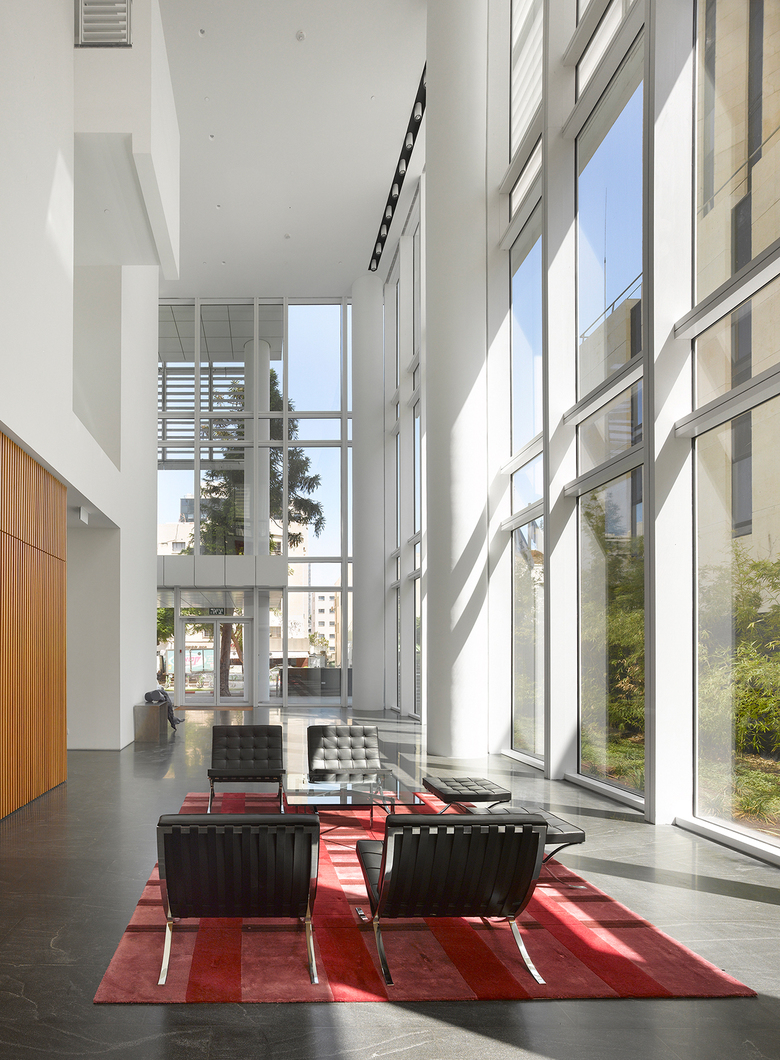 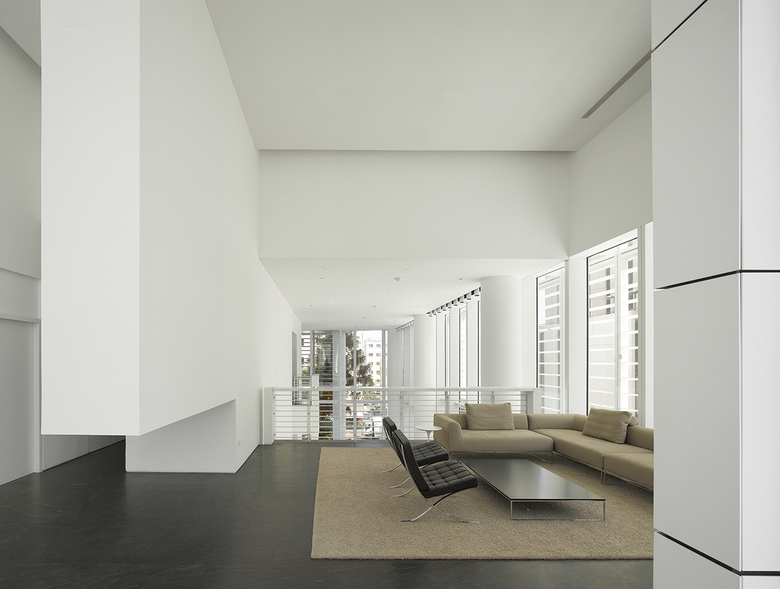 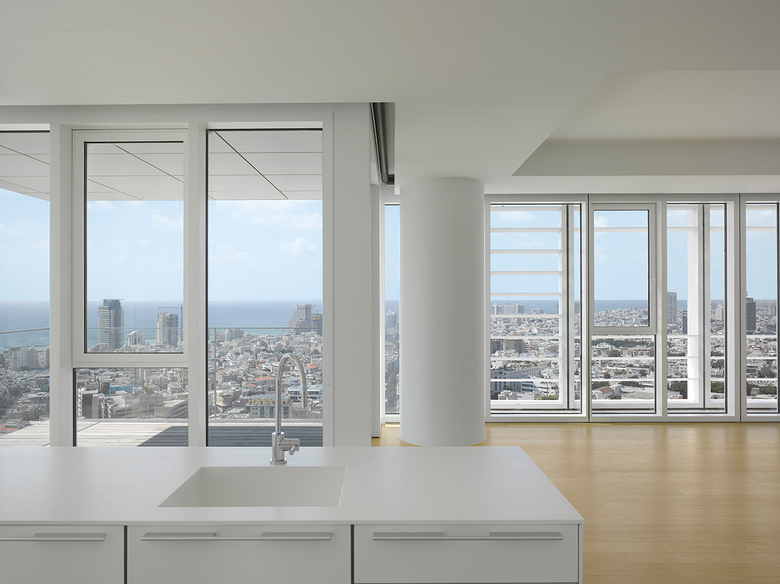 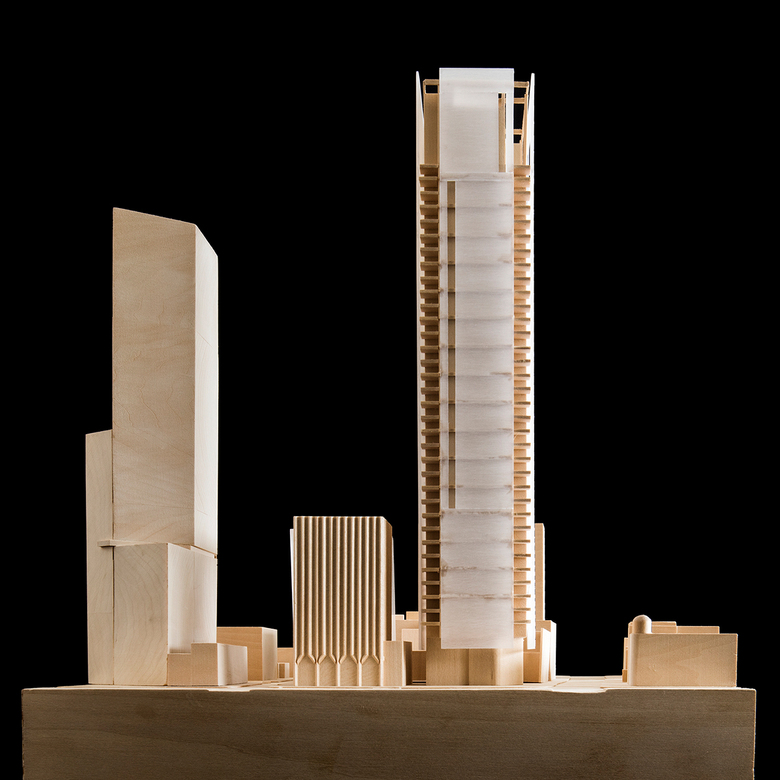 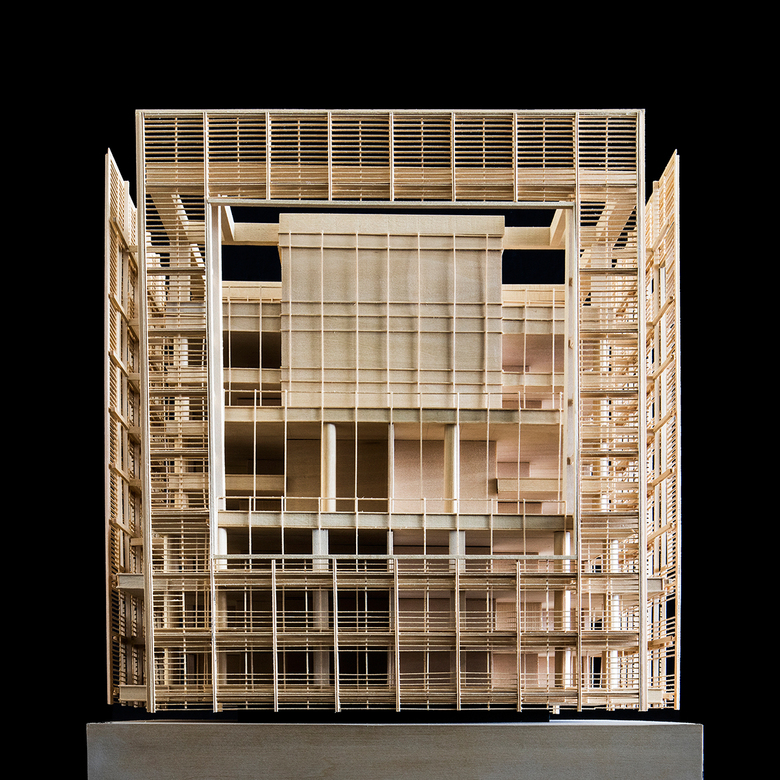 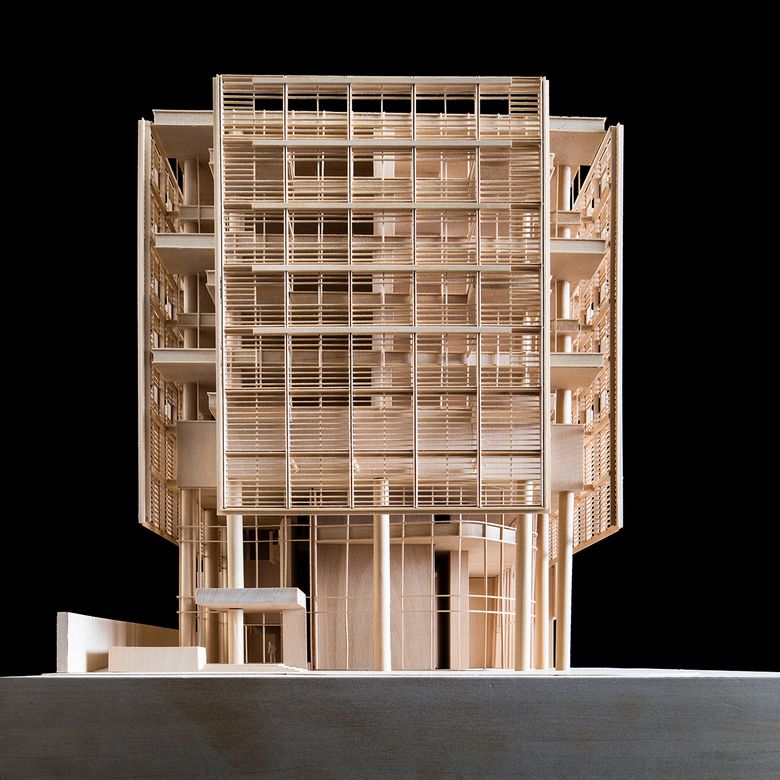 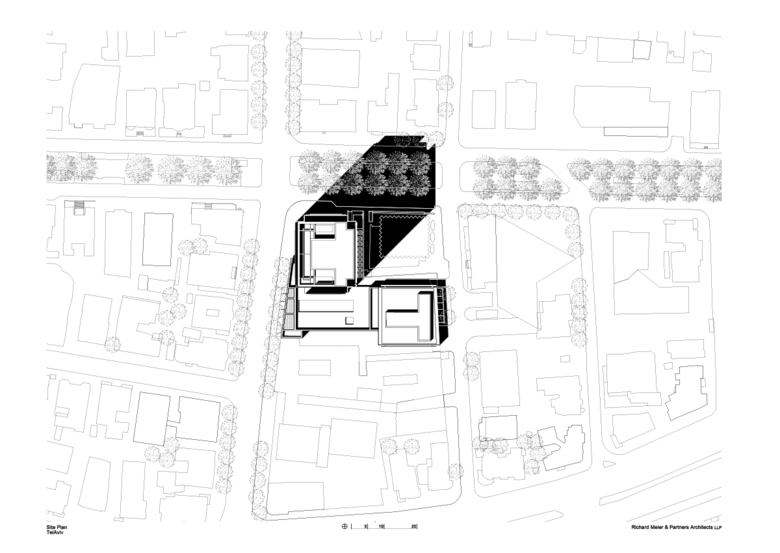 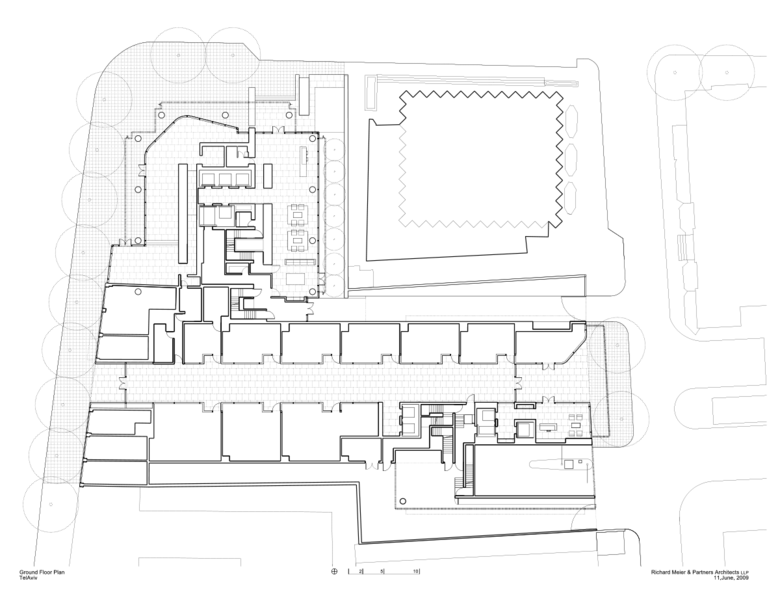 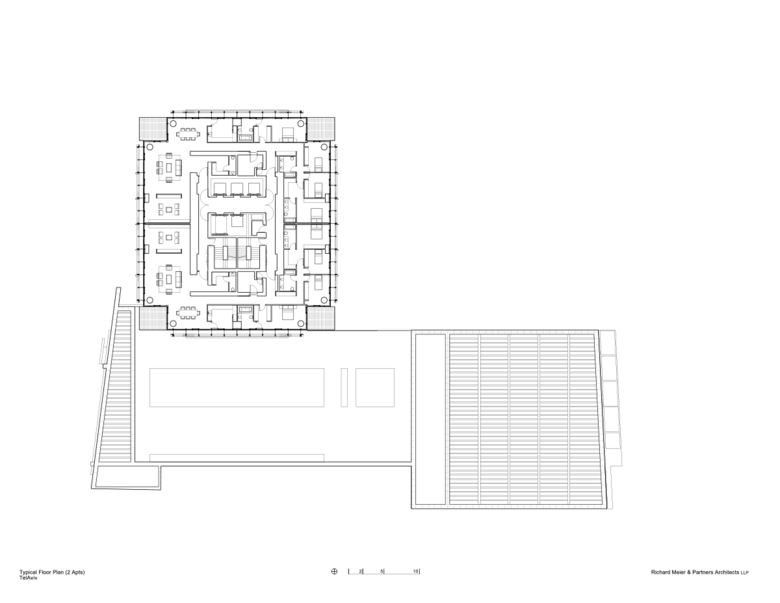 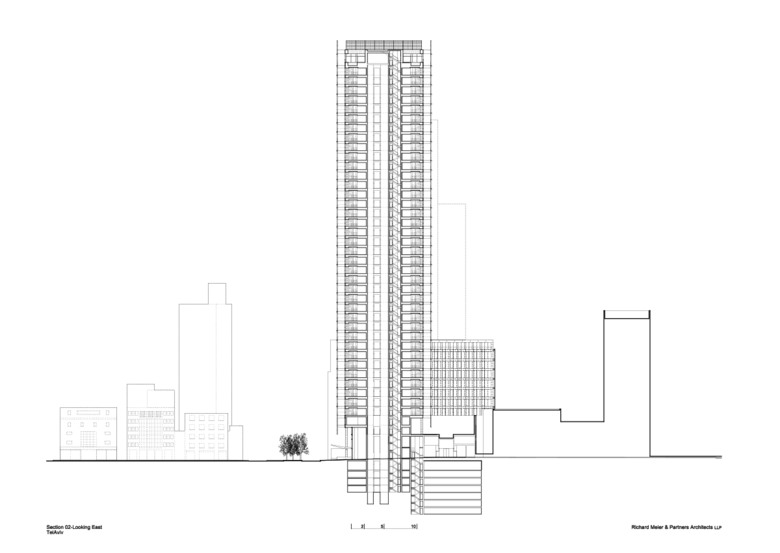 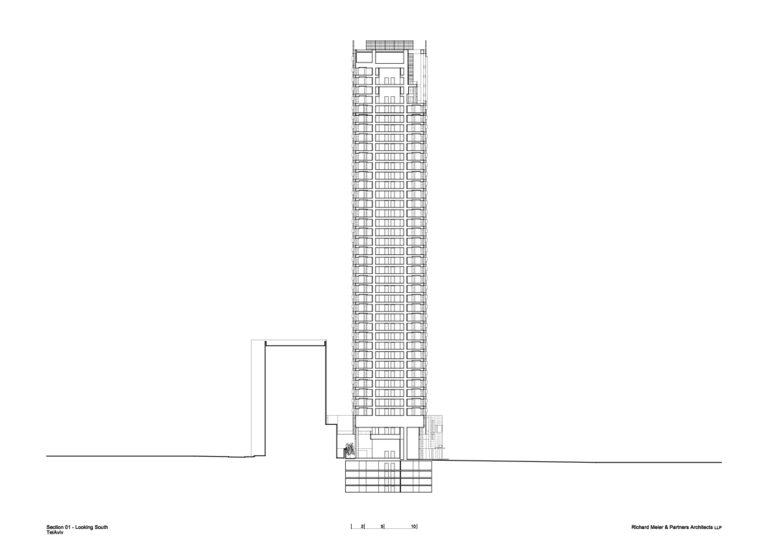 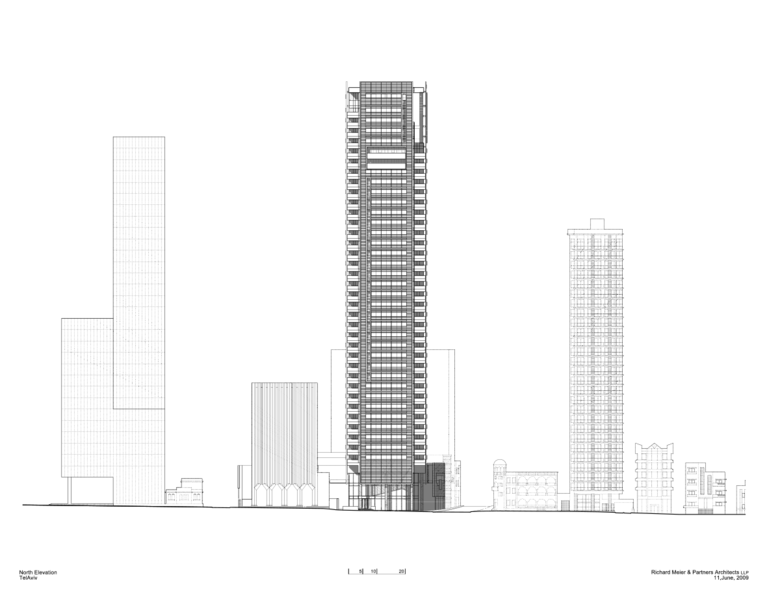 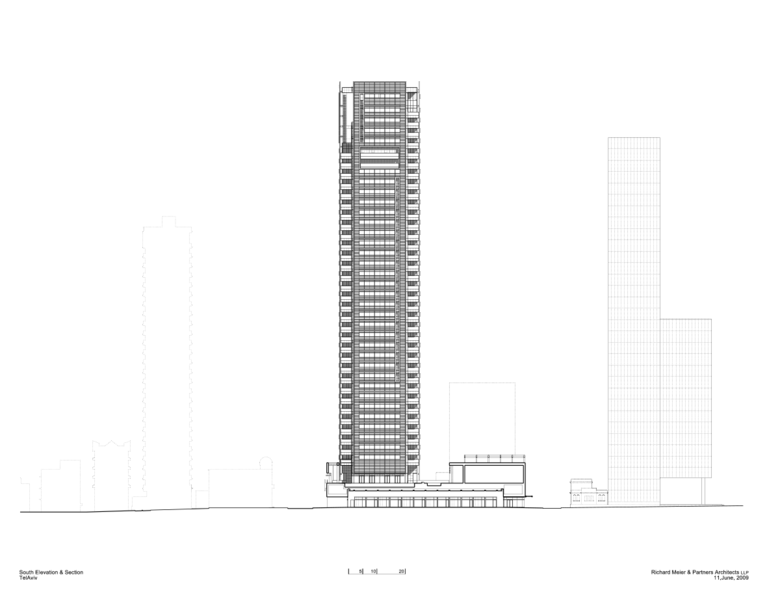 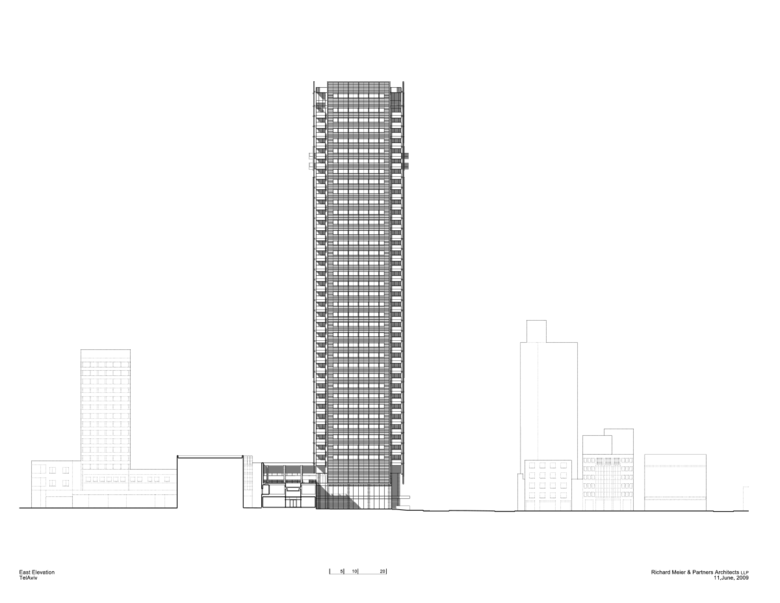 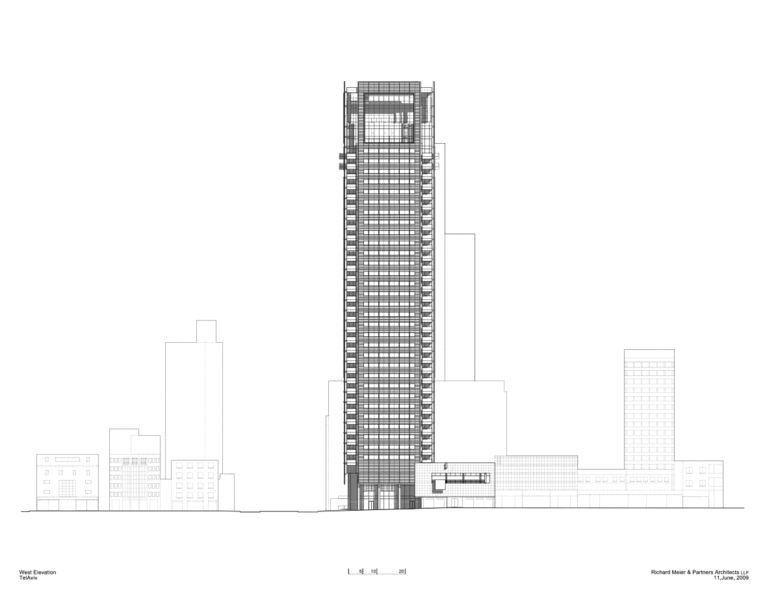 Richard Meier & Partners has completed its first international residential tower and its first project in Israel. The new Rothschild Tower is inspired by the scale and Bauhaus design principles of its neighbors in Tel Aviv’s White City. The building’s image of lightness and transparency is the result of a double layer façade comprised of clear glass with a delicate white louver screen inspired by traditional Middle Eastern clothing and prominent corner balconies derived from the low to mid-rise neighboring buildings. A large “urban window” frames the western views to the sea from the Penthouse terraces.

The new residential tower is anchored to Rothschild Boulevard in the heart of Tel Aviv’s White City, a UNESCO World Heritage Site. The neighborhood is filled with thousands of Bauhaus buildings designed by German Jewish architects who began immigrating to Israel before WWII. The city holds the world’s largest concentration of Bauhaus buildings, 4,000 in total, dating mostly from 1931 to 1956, but also encompassing subsequent designs that were built as a tribute to the style.

The Boulevard is a gracious civic and cultural promenade that cuts through the White City under an urban canopy of shade trees, and populated with a vibrant variety of restaurants, street cafes, and espresso pavilions.

Rothschild Tower is a simple graceful residential tower lightly resting on a retail base. The design is inspired by Bauhaus principles that were based on functionality and a certain sparseness or economy of means using modern mass produced materials, and in this case a repetitive planning module. The fundamental considerations that shape the tower design are the quality of light in the plan, views to the city and sea, an efficient assembly of “served” and “service” spaces around the core, and the building’s relationship with the existing fabric and massing on Rothschild Boulevard.

Lightness and transparency of the tower and base are the primary goals, not only to reduce the apparent scale and mass in the context of the low to mid-rise neighborhood, or the scale-less reflective towers in the area, but to express the optimism, openness, and energy of the more secular modern character of Tel Aviv. The delicate louver screen is an elegant white “veil,” inspired by the ventilated protective layers of more traditional Middle Eastern clothing. It both defines and obscures the distinction between the public image of the building and the private realm within. The louver elements of the screen protect the delicate clear glass skin, and have local architectural precedents in the ubiquitous “treeseem”, the sliding louver blinds enclosing open air porches or negative spaces so common in the existing neighborhood Bauhaus buildings.

The Lobby and Retail spaces are spare, lofty, and open to the surrounding streets and neighborhood. Behind the tower a former through-block retail arcade is being restored to its former glory to firmly embed the building and its residents in the pulse of the neighborhood.

At the larger scale of the city, the lightness and transparency of the tower will distinguish it dramatically among the glass and heavy neighboring towers, and perhaps inspire sustainable approaches to a more “accessible” character for large buildings in this climate in the future.