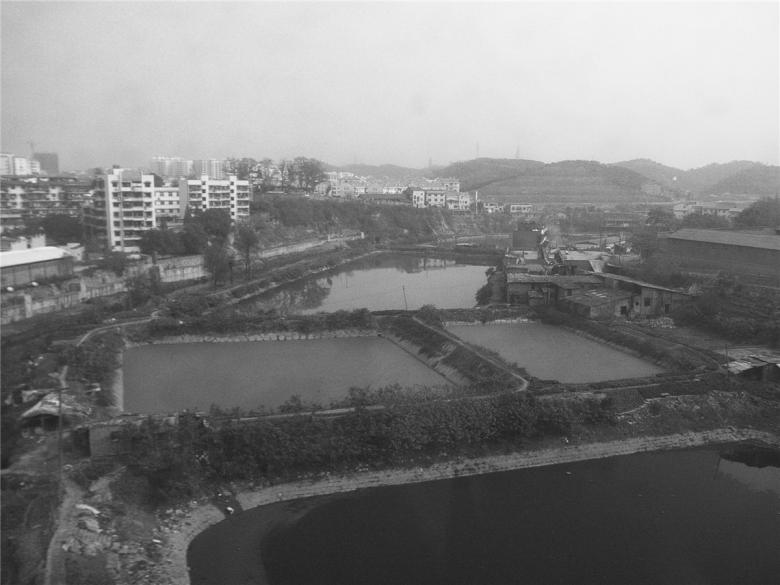 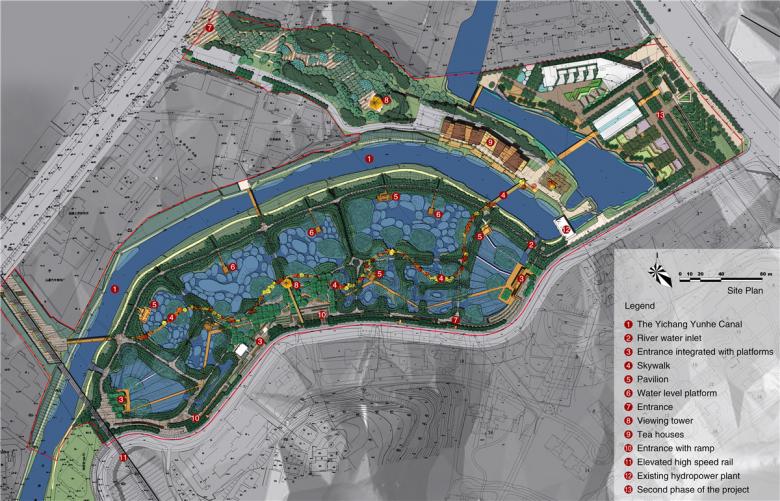 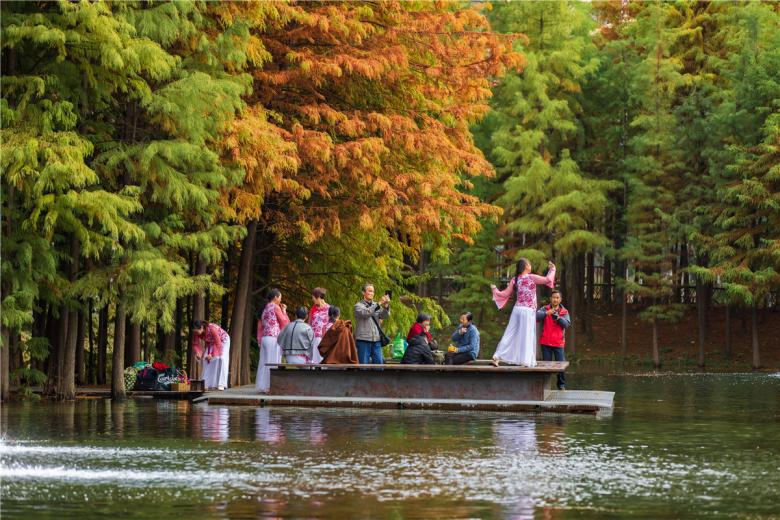 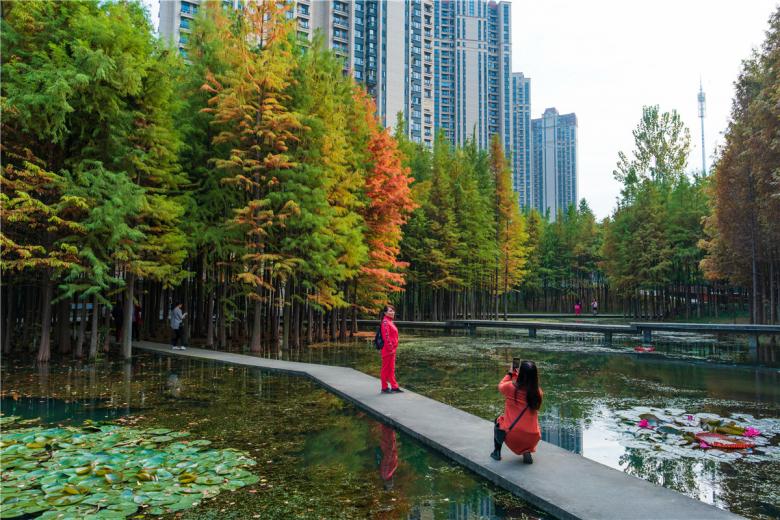 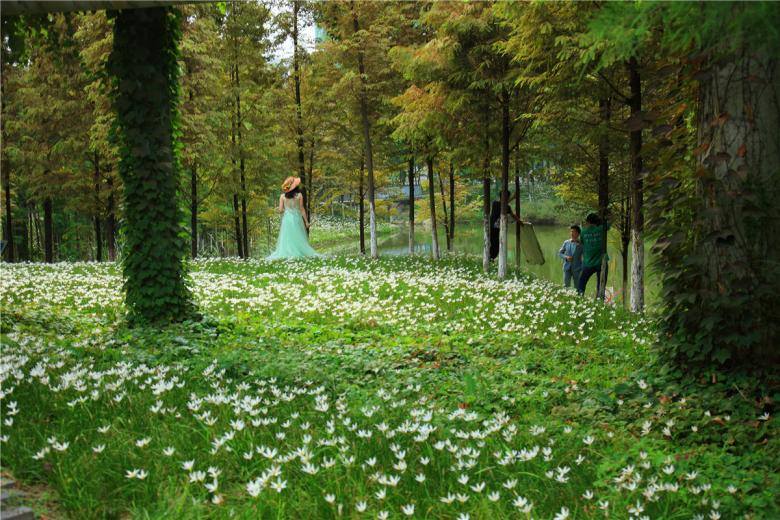 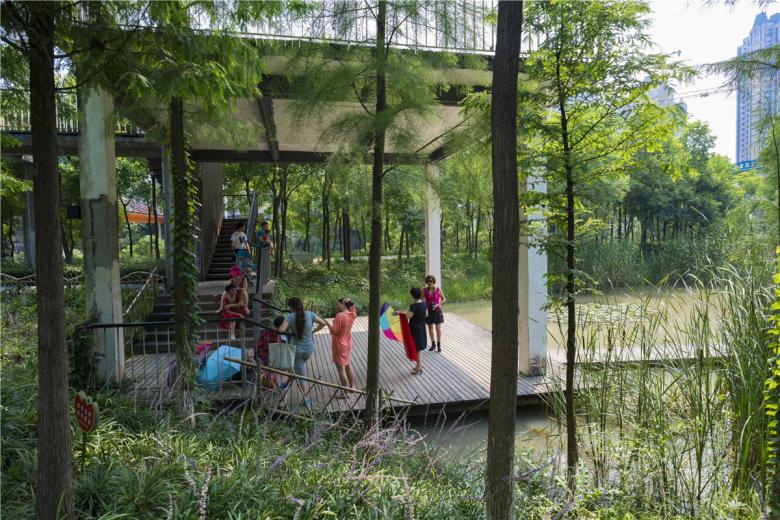 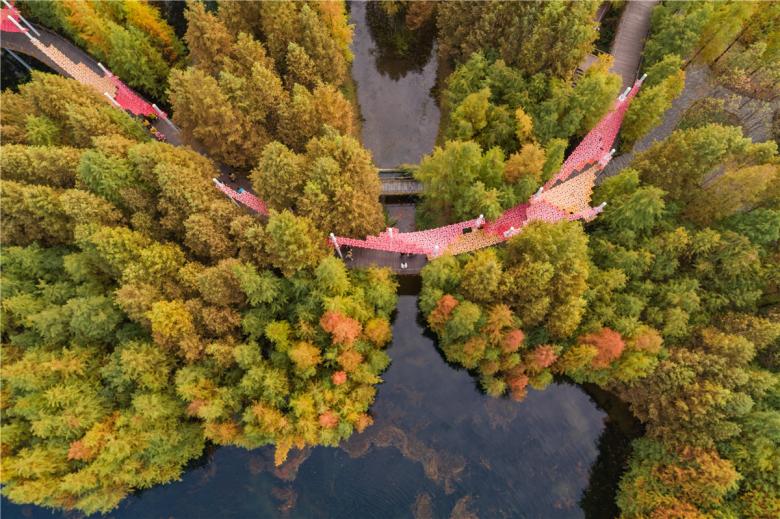 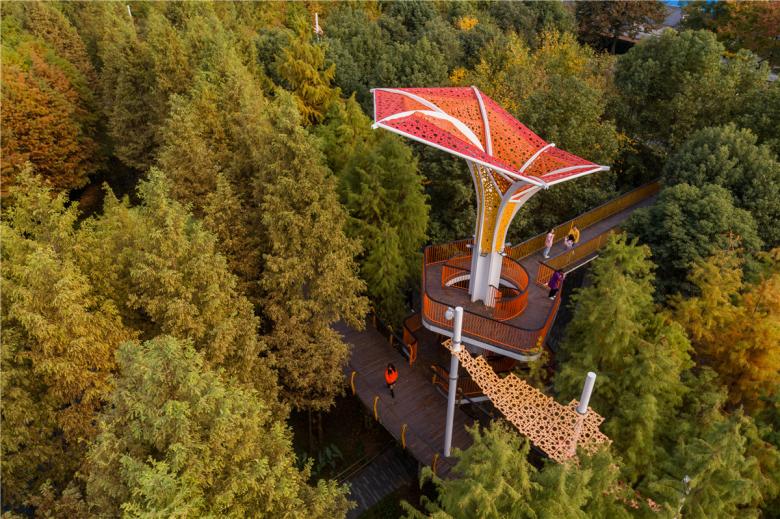 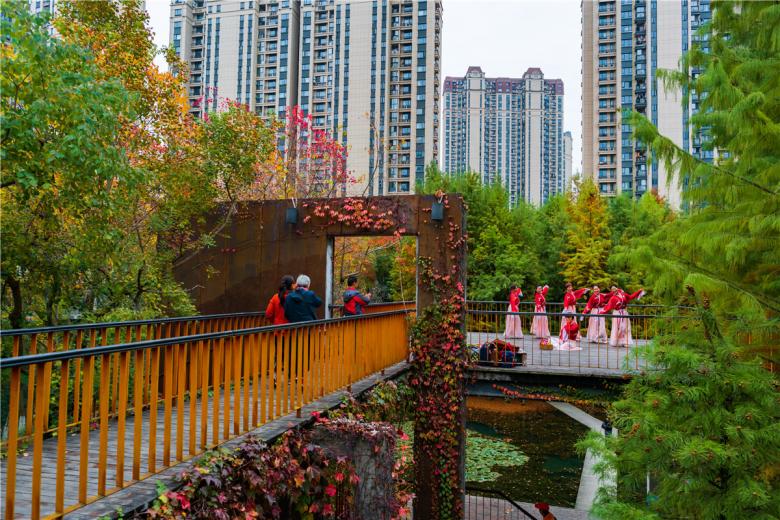 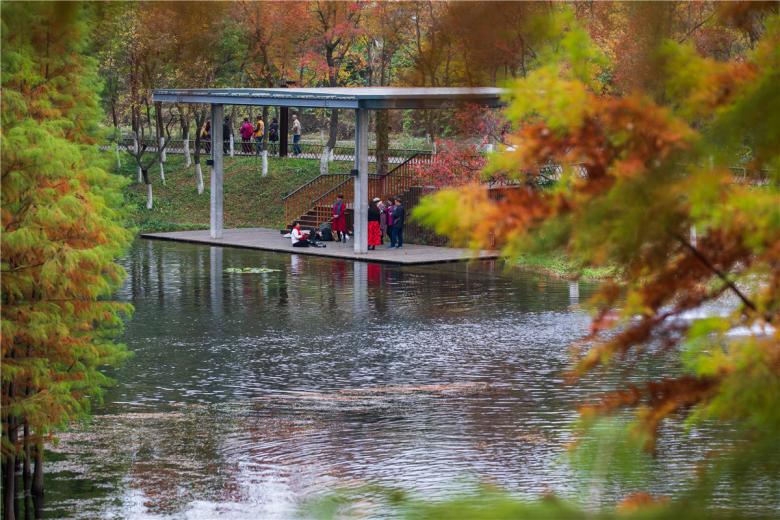 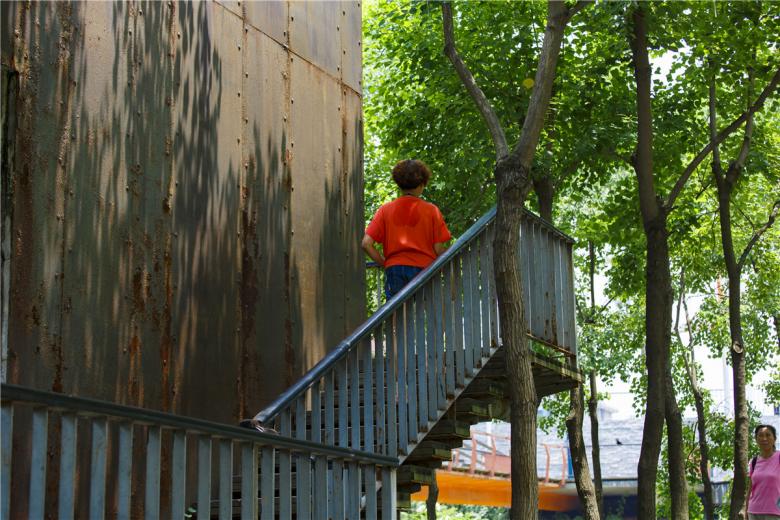 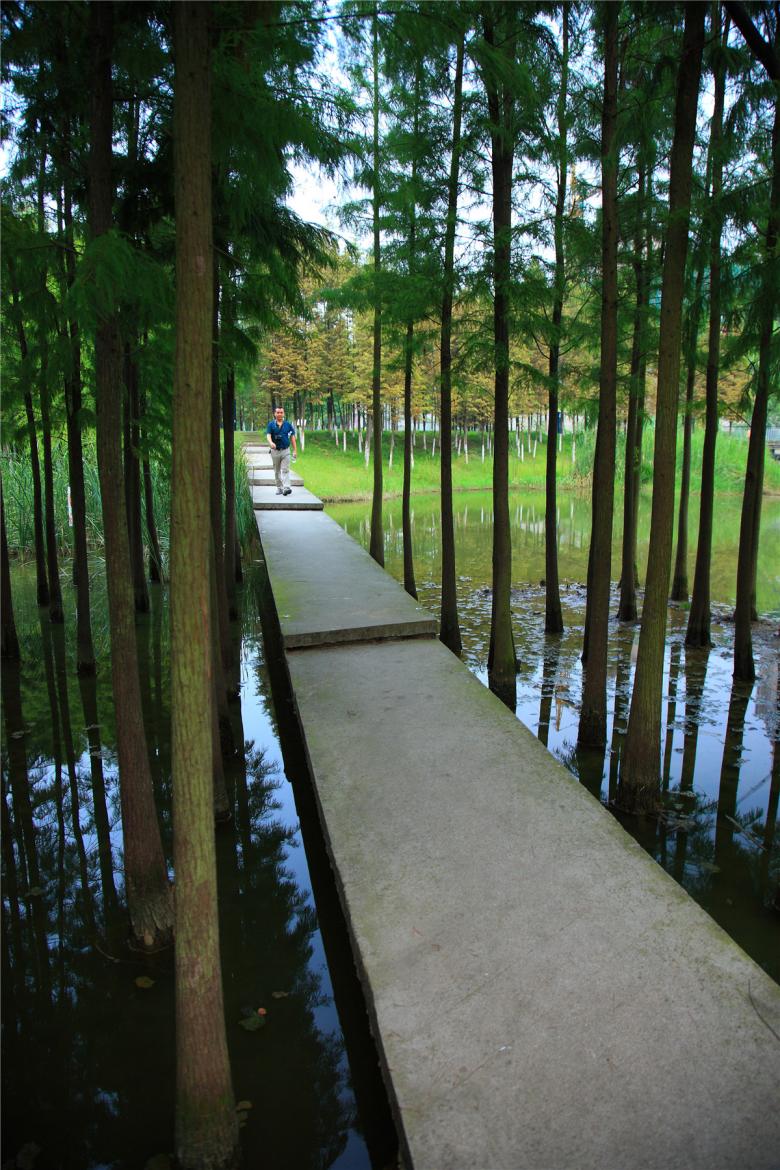 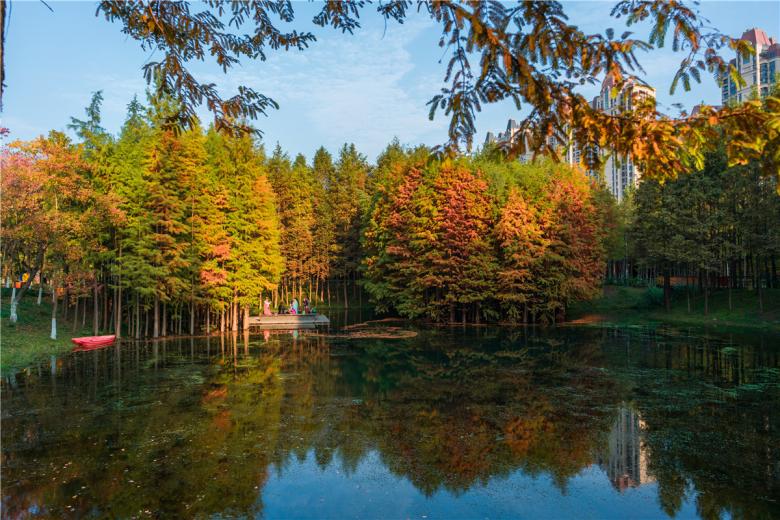 1. Challenges
The Yichang Yunhe Park is located in the center of the East New Eco-city of Yichang. Situated in a small basin within a hilly landscape, the park has a canal along its north side, a high-speed train track to the west and urban street to the south. Like other Chinese cities, Yichang is experiencing rapid urban growth that is encroaching into the surrounding agricultural land. The twelve-hectare (30 acre) site was previously a fish farm comprised of twelve fishponds. The site was planned as a park (the land use planning was also done by the landscape architect), since it was unsuitable for urban development but had the potential for transforming the canal into a greenway that would run through the city.

The site poses the following challenges and design opportunities:

First, there is a dramatic ten-meter drop in elevation from the urban street, which presented the challenge of making the park accessible to the users from the newly built residential towers in the surrounding hills.

Second, the canal water was extremely polluted, caused by eutrophication from the over use of chemical fertilizers in the watershed and by household sewage run off. The canal was built in the 1950s for conveying drinking water for some 100,000 residents. Tragically, contamination caused the city to abandon the canal as a source for potable water. The site was denuded except for two trees, and the fishponds were also the sources of water pollution due to the excessive use of fish feed. But this calamity presented an excellent opportunity to design a park that demonstrates ecological approaches to decontaminating water and remediating the landscape. This model can be replicated along the whole watershed and help boost the city’s image.

Third, the developers wanted to use this park to increase the value of the land surrounding this site without investing heavily on the front end of the project. The challenge was to design a park that would be an inexpensive catalyst to trigger urban development.

2.Design goals and strategies
The landscape architect wanted to rejuvenate the ecosystem of the site by making full use of the topographic features with minimal intervention. Specific goals were: to transform the site into an urban “green sponge” that remediates polluted river water and stormwater runoff; provide a variety of habitats for biodiversity; and create a pleasurable revitalizing oasis for new urban residents. With these intentions in mind, the designers focused on the following design strategies:

(2) Planting patterns to rejuvenate the fishpond landscape: The barren and featureless fish farm is transformed into a lush oasis by the designed planting of native vegetation: glyptostrobus and dawn redwood trees , which are considered to be “living fossil” trees found in this region. They are planted in dense patches to create volumes that break up the monotonous fishpond landscape. Chinese tallow trees are planted on the bank of the canal at the north side to create a continuous greenway that will connect the park with other greenspaces along the canal. Hackberry, ginkgo and liquidambar are planted at the entrances and meeting places for shade. The ground cover is composed of self-seeding annuals and perennials and the ponds are planted with wetland species including lotus, cattails, reeds, etc. to strengthen the filtration function of the ponds.

(3) A network of paths and skywalks for universal access: A network of pedestrian paths incorporates the pond dykes and additional bridges over ponds. Local materials are used to pave these paths. The bridges are made of simple concrete, the design of which is inspired by local terraced bridges used for fetching water from the ponds. A skywalk flying above the tree canopy winds across the park and provides easy access to urban residents – especially those in wheelchairs–who live at street level ten meters above the park.

(4) Intervention structures create a rich experience: Multiple platforms, pavilions and towers are scattered throughout the park. These structures function to rectify the differences in elevation between the park and the urban street; they create access from the fishpond dykes to the bottom of the pond area; they connect the skywalk to the ground, as well as provide a rich experience for exploring and resting. These subtle interventions make the otherwise monotonous spaces rich and inspiring.

3. Conclusion
This project demonstrates a replicable and inexpensive ecological solution that utilizes minimal intervention strategies. It transforms a suburban agricultural landscape into urban green sponge that fosters multiple benefits to the city, including water remediation and stormwater management. While retaining the “memory” of the original site, it provides a pleasing restorative environment and an educational space for the urban residents.