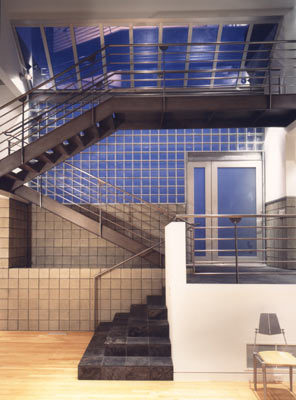 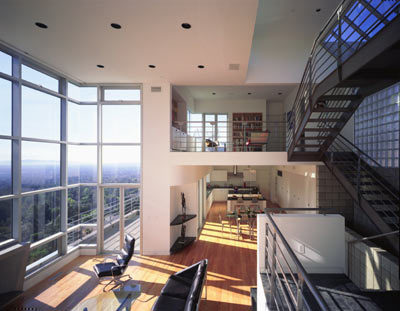 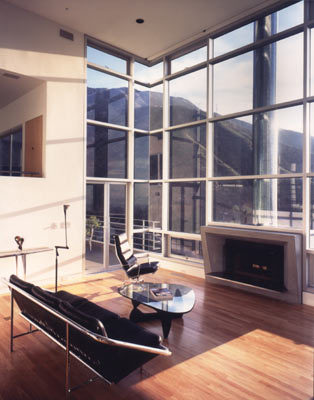 The site is located on a very steep, east facing, down slope hillside where metropolitan Los Angeles meets the Angeles National Forest in the foothills of the San Gabriel Mountains. The three eighths acre parcel is bounded by small, suburban residential structures to the south, and offers a panorama of dramatic, unobstructed views of the mountains and city from the northeast to the southeast. Distant views of downtown Los Angeles and the Pacific Ocean are available to the west on rare, smogless days.

The clients requested a modest residential program of 2,400 square feet to accommodate two adults and occasional guests. All principal interior spaces were required to have direct access to exterior decks.

The program is organized horizontally on two split levels along a circulation axis that parallels the edge condition of the site. The entry introduces a cross axis that terminates in a two story living room that is the spatial focal point of the building. Secondary spaces on all levels extend in a linear fashion from the living room in a north and south direction, opening on to terraces. The lower, public levels include the entry, living, dining and kitchen to the south, and the media and guest room to the north. The upper, private levels contain the library and office to the south, and the master suite to the north.

The building fronts the street with a fragmented wall of concrete block and a rigid, rectilinear composition of stucco forms and glass block that evoke the presence of a barrier that obscures, while hinting at what exists beyond. In contrast, the rear, hillside elevation consists of a softer, perforated, curvilinear plane bisected by a glazed, transparent object anchored to the hill on a broad base of concrete block. The resultant experience consists of a building that hides the site on approach, and then reveals its many vistas as as the building is entered and unfolds.

The spatial experience is orchestrated by a central open stair that connects all levels as it bridges the main living space from side to side. From a rather modest entry, movement up the stair reveals a sequence of spaces that alternate from the large, open and dynamic quality of the central living room to secondary spaces that are progressively smaller, more enclosed, private and selective in their views.