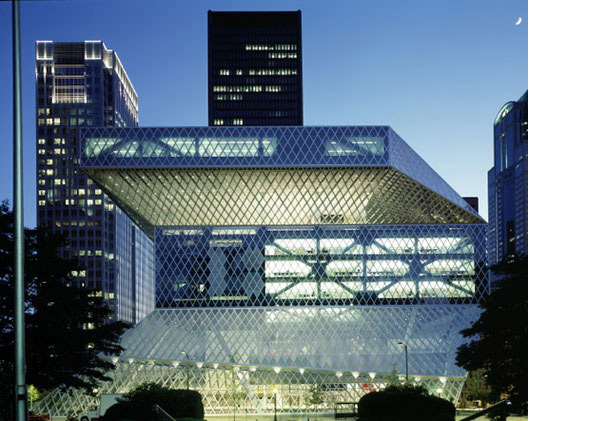 At a moment when libraries are perceived to be under threat from a shrinking public realm on one side and digitization on the other, the Seattle Central Library creates a civic space for the circulation of knowledge in all media, and an innovative organizing system for an ever-growing physical collection – the Books Spiral. The library’s various programmes are intuitively arranged across five platforms and four flowing “in between” planes, which together dictate the building’s distinctive faceted shape, which offers the city an inspiring building that is robust in both its elegance and its logic

OMA’s ambition is to redefine the library as an institution no longer exclusively dedicated to the book, but rather as an information store where all potent forms of media – new and old – are presented equally and legibly. In an age in which information can be accessed anywhere, it is the simultaneity of media and (more importantly) the curatorship of its contents that will make the library vital.

The Mixing Chamber, centrally located on the third floor, is an area of maximum librarian- patron interaction – a trading floor for information orchestrated to fulfill an essential (though often neglected) need for expert interdisciplinary help. Librarians guide readers up into the Books Spiral, a continuous ramp of shelving forming a co-existence between categories that approaches the organic: each evolves relative to the others, occupying more or less space on the Spiral, but never forcing the ruptures within sections that bedevil traditional library plans. Upon the opening of the Seattle Central Library, the Spiral’s 6,233 bookcases housed 780,000 books, and can accommodate growth up to 1,450,000 books in the future, without adding more bookcases.