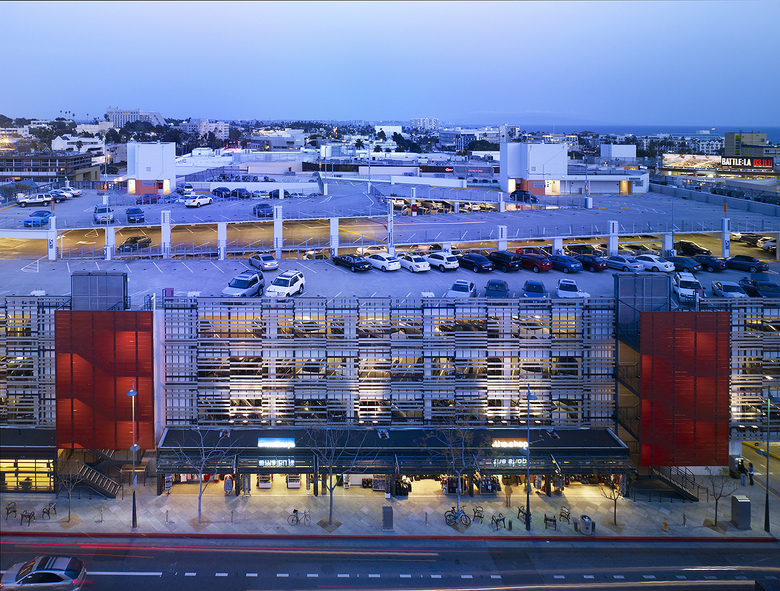 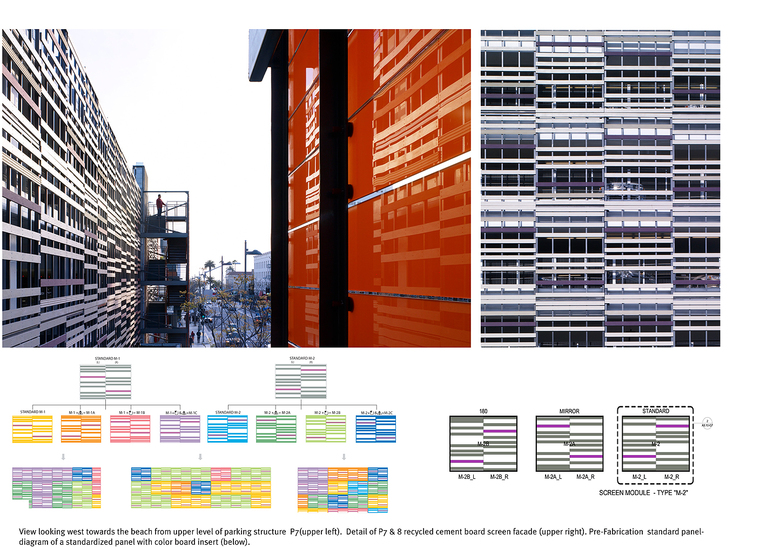 Brooks + Scarpa was commissioned to design improvements to eight parking garages surrounding the popular 3rd Street Promenade of Santa Monica. The improvements include new facades, improved pedestrian access, sculptural signage and public art with  Cliff Garten Studio and other public artists, enhanced LED lighting for safety and aesthetics, and ground floor retail. The projects will afford a much more convivial and welcoming experience for residents and for the millions of visitors the city receives every year.

Brooks + Scarpa’s work on parking garages 7 and 8 in particular, which are attached to the newly reopened Santa Monica Place mall, extends and complements several design legacies of greater Los Angeles and is in keeping with Santa Monica’s image as a vibrant, progressive, forward-thinking community.

Both garages adjoin and serve the Frank Gehry-designed Santa Monica Place, a 1980s indoor shopping mall that was transformed by a the Jerde Partnership-led team into an open-air shopping promenade. The new Santa Monica Place will build upon the success of the 3rd Street Promenade and Southern California’s ideal outdoor shopping climate, creating a more walkable and street-like atmosphere. The redesign of the garages preserves the iconic steel mesh signage created by Frank Gehry, while updating many other aesthetic and functional features for the 21st century.

New pedestrian flyovers connect the garages to the reconfigured shopping center, and design facets of the garages are synthesized with the surface treatments of Santa Monica Place to communicate an integrated whole. The garages are more than utilitarian structures. They are essentially giant display walls, and the new design exploits this feature, showcasing the work of accomplished public artists such as Ball-Nogues Studio and Anne-Marie Karlsen.

New features include vibrantly patterned system of panels that screen the parking decks.

Horizontal bands of earth-toned terra cotta on the buildings melt into interpolating brises-soleil slats on the garages. The slats, just one of many green features of the redesigned garages, are made of recycled plastic, formed into screens resembling lumber pallets.

Brooks + Scarpa also created the infrastructure for the later installation of solar-panel-equipped overhead canopies on the top parking levels, providing cooling shade for vehicles and pedestrians, as well as electric energy for the complex and the city.

Step Up on Fifth