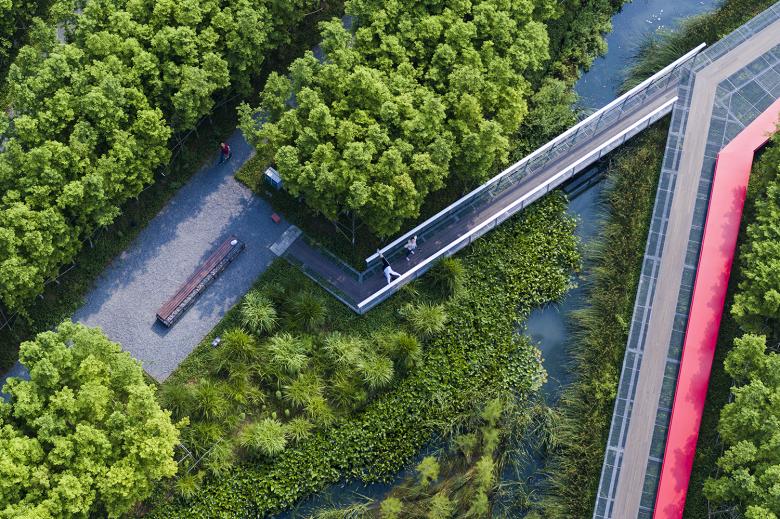 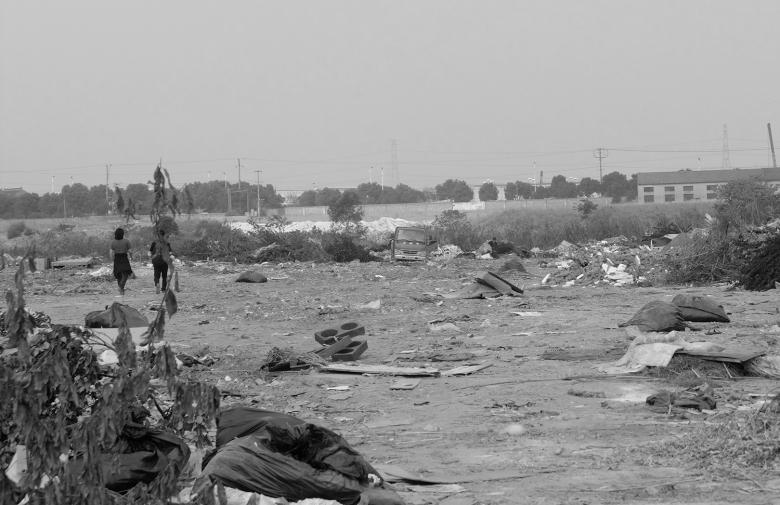 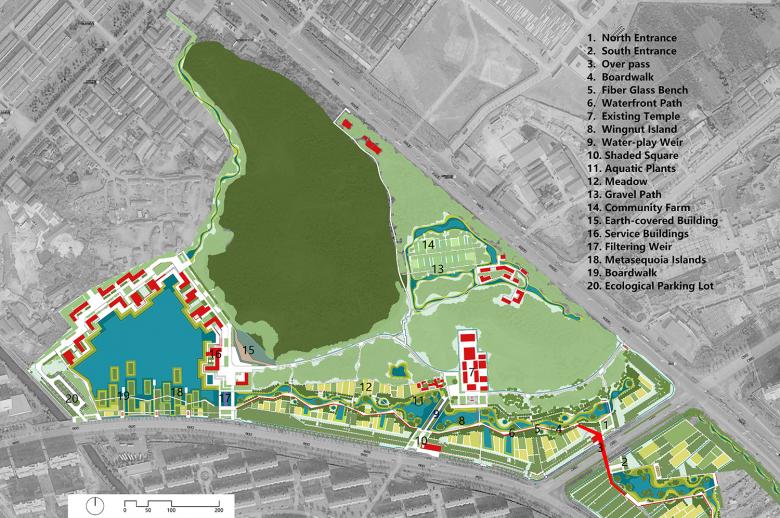 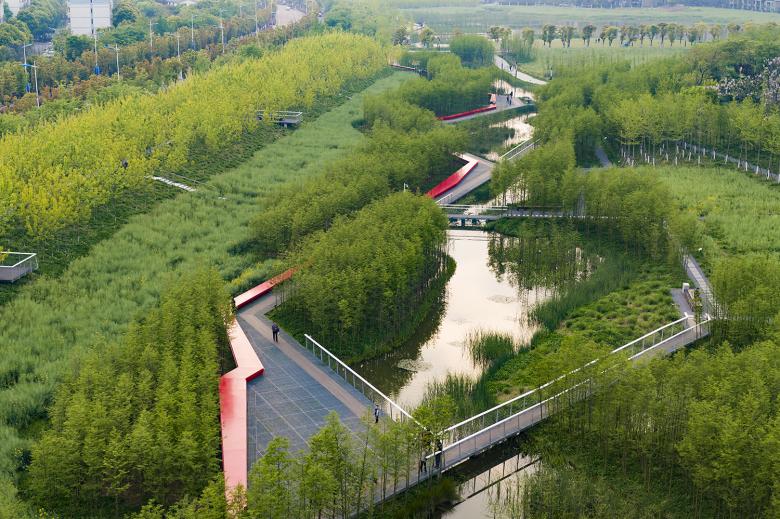 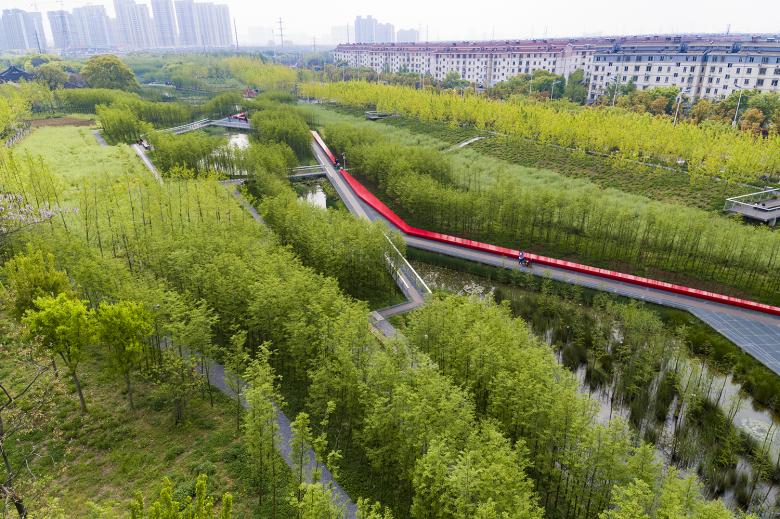 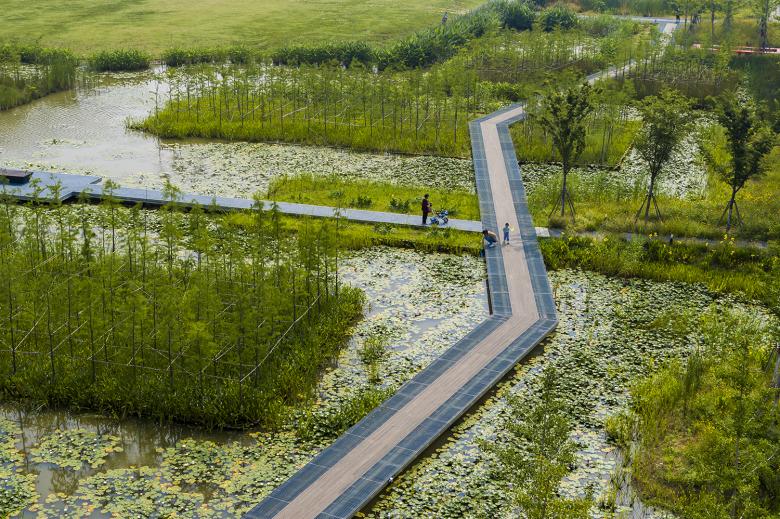 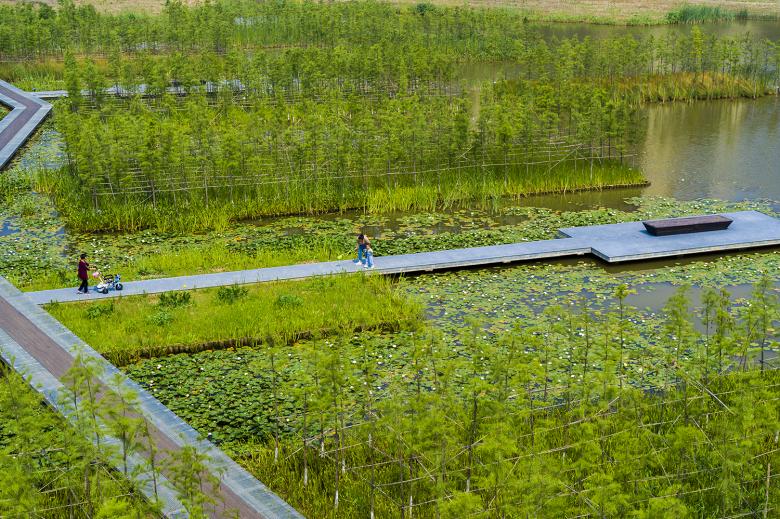 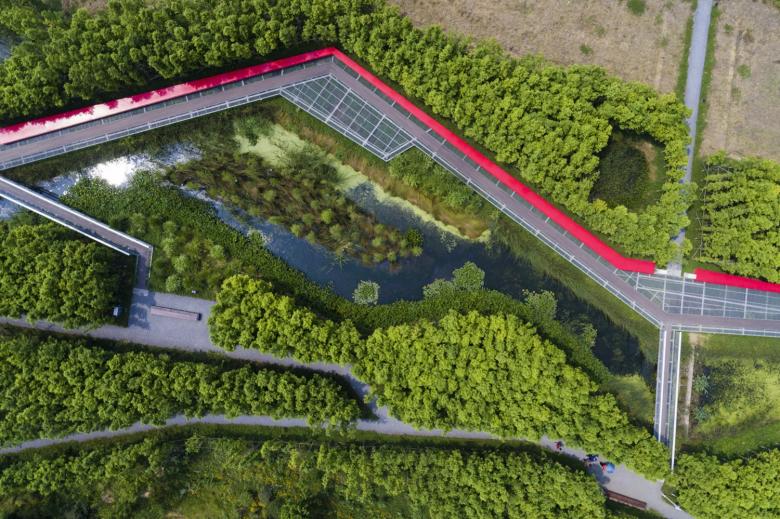 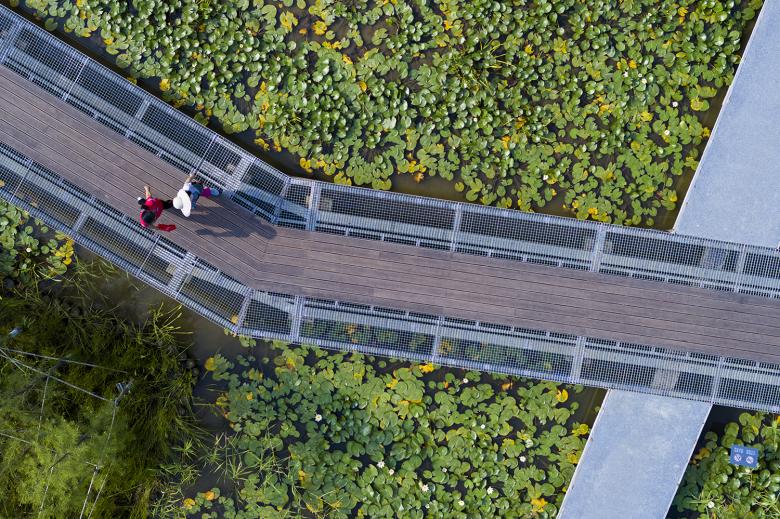 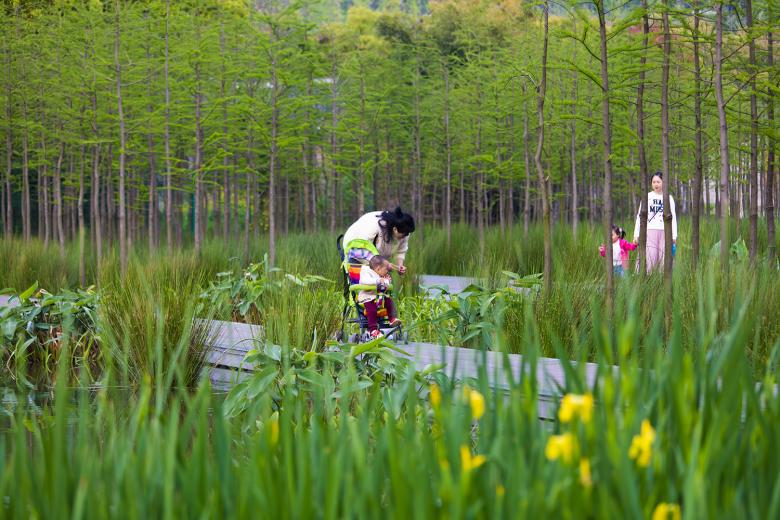 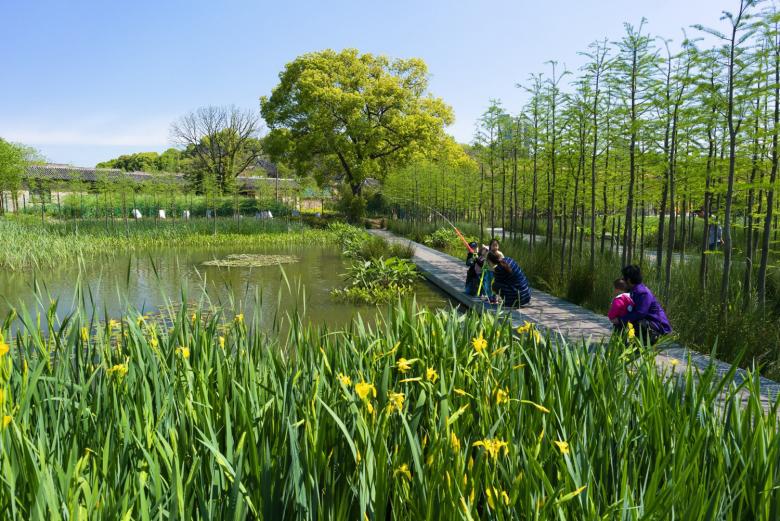 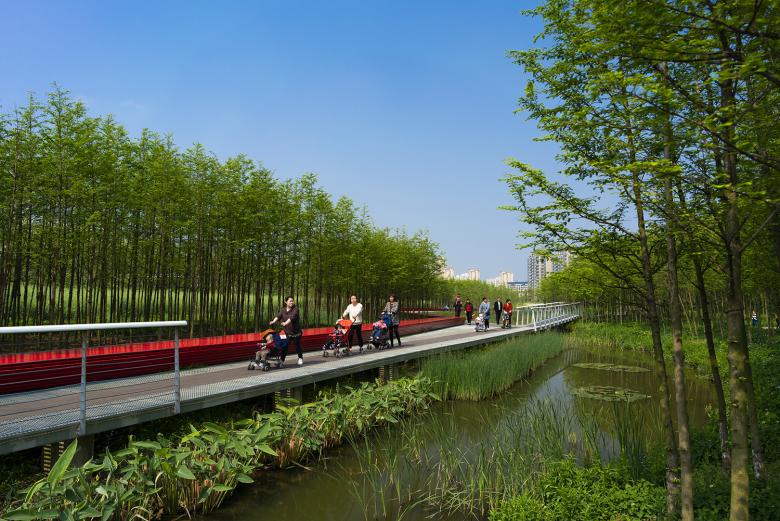 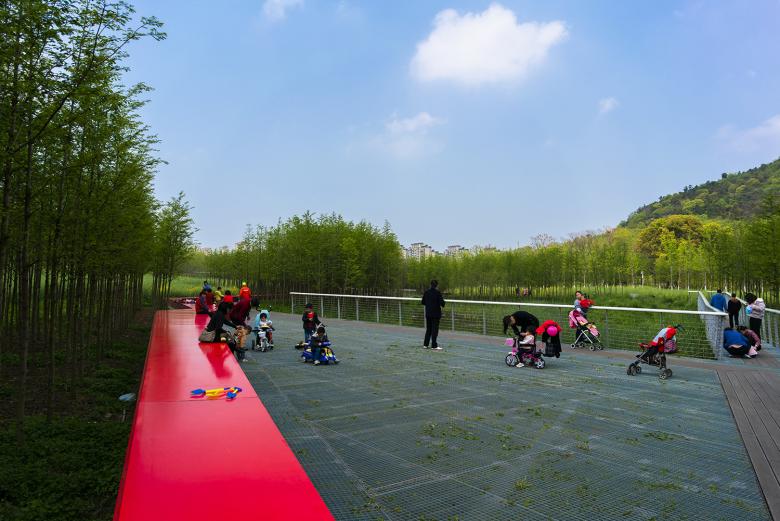 1.Project Statement
In Suzhou City, as anywhere else, urbanization had caused many farmers lose their land and community. The relocated neighborhoods at the periphery of the city were under served with public spaces and recreational facilities, and were in terrible need for the recreation of a sense of belonging and of community, and new identity. Meanwhile, the ecological and environmental situations around these urban fringe settlements were unhealthy. Built on a deserted stone quarry at the edge of the urban area, the Zhenshan Park is a relocated community-based, regenerative living landscape that heals the earth and help to rebuild the community. The scars on the barren hills are recovered using simple cut-and-fill and a porous linear wetland is created at the same time to showcase a water remediating solution that addresses regional water problem. A passage composed of board walks and red fiberglass benches fulfills the local community’s recreation needs and activates their relation to the landscape. This recovered nature not only heal the earth, but also heels the broken community.

2.Challenges and Design Objectives
The 43ha (106 Acre) Zhenshan Park is located at the fringe of Suzhou City, known as a garden city around the world because of its many classical Chinese gardens. The site is at the east side of the Taihu Lake; the Lake has been suffering sever pollution caused both by chemicals that leak into the water system from the surrounding farmland, as well as by the storm runoff from the urban area. The site was an abandoned granite quarry, and there is one local temple on site. The surface drainage system on the site and vicinity has been destroyed and the water became contaminated that eventually flew into the Taihu Lake.
Meanwhile, the site was surrounded by new residential development housing the newly urbanized immigrants mainly composed of relocated farmers, who had just lost their land and communities due to the fast urban development of the ever growing city. These urban fringe neighborhoods were underserved with cultural and social amenities, and lack of open spaces for recreation and social activities. There was a lack of sense of community, lack a sense of belonging and identity. They were also looking for places to cultivate crops, or at least a version of the habitat they brought into city when they became urbanized.
In addressing the above issues, the objectives of this project are threefold: to rehabilitate the quarry and heal the nature; to demonstrate a landscape solution to remediating the contaminated surface water at in the region; to create an open space fulfilling the local community’s need of daily recreation in a pleasant way, and build a sense of community and belonging, and create a new identity.

3.Design Strategies
We used four strategies to transform the scar on the land into a living corridor that provides multiple ecosystem services.
(1)Community-based design. A comprehensive survey based on questionnaires and interviews was carried out before the master plan was developed. We found that the local community considerably concerned about the small temple on site, which would have been removed by the township government, to be a sacred place. They badly need places to jog in te morning and evening, and have places to have kids and elderly meet together. The survey also found that the local communities wanted to reserve some farmland in the park to cultivate crops and vegetables, which is usually not allowed in the urban area. The landscape architect respected the local people’s needs and integrated both the small temple and some patches of farmland into the park.
(2) Cut-and-fill is used to rehabilitate the exposed granite quarry on the slope while creating a wetland at the bottom of the hill. The solid waste at the foot of the hill was used to fill the quarry pits on the slope. These hills were then covered with earth excavated at the foot of the hill to allow native forest to grow. As a result of the cut, a constructed linear wetland was simultaneously created on site. This wetland collects stormwater from the surround landscape and street, and is designed as a porous sponge to filtrate the polluted surface water. A dozen weirs are created to slow down the flow and aerate the water.
(3) A mixture vegetation of productive crops, shading trees and wetland species are introduced. The farmland patches are integrated into the park,. Crops such canola, rice and sunflowers are rotated by seasons and give the park an aspect of productivity. The Chinese Dawn Wood（Metasequoia glyptostroboides) is used as the major canopy tree. It is grown in groves to reinforce the sense of this being a shaded glen. These trees are also planted in the wetland in clusters to clean up the eutrophicated water. Diverse native aquatic and wetland plants are used to cover the wetland in a dense pattern.
(4) An active passage composed of board walks and benches fulfills the recreational needs of the local community. The boardwalk, about one kilometer long, is detached from the ground and is made of porous steel mesh so that wetland grass can penetrate through its surface. A bright red bench made of fiberglass that frames and gives order to the otherwise messy wetland vegetation zigzags along the corridor. The bench is lit from the inside, creating a bright red line in the dark, encouraging local people to use the park in the night. Several open squares accommodating group activities and family gathering are integrated into the wetland corridor. They are also paved with eco-friendly steel mesh that is detached from the wetland underneath. Green leaves penetrating through the mesh create a texture mixing steel with living material.

4. Result
This community-based park has proven to be great success. It is a low-budget, low-maintenance, ecologically functional and demonstrative, and extremely active. It not only provides a much loved recreational place for the communities around it, but has also become a weekend attraction for the whole city of Suzhou. It is a family park used by couples and grandparents, a romantic place for young couples, an daily exercise park for joggers with their pets, a memory park where local people find their farming roots and spiritual places that heal the broken community, and help to create them a new identity. Last but not least, it is a demonstration of water remediation and earth healing.