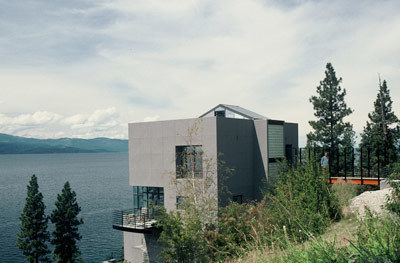 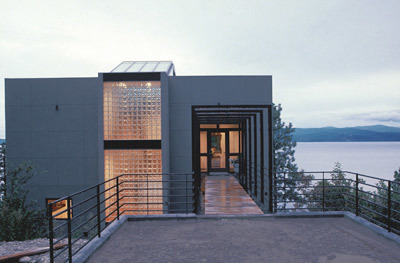 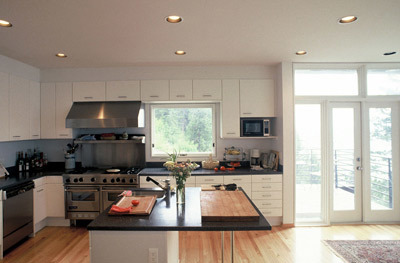 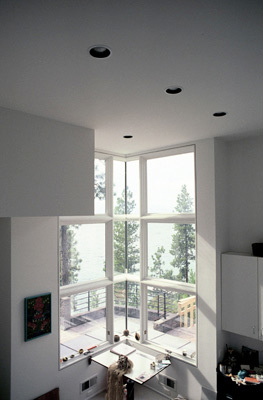 The site is a steep, wooded, rocky hillside that slopes down to Flathead Lake in the magnificent Flathead Valley in northwestern Montana. It is blessed with breathtaking 180º panoramic views of the lake and mountains to the south, west and the north. On the site, dark granite rock outcroppings protrude from a thick cover of mature forest. Access from the highway is from the East via an existing driveway, lined with stone walls that terminate at the former site of a small cottage (now demolished) previously occupied by the clients.

The clients requested a 3000 square foot summer house for two adults and occasional guests. Also requested were a studio, an entertainment room and roof deck. Their primary desire was to create a contemporary retreat that would optimize spectacular views of the natural landscape, water and sky and enhance a lifestyle of indoor - outdoor living.

The program is organized vertically on four levels in the form of a tower situated on a base. A skylighted central stairwell connects all levels, with the entry and master suite at the top, living - dining - kitchen levels in the middle and guest - entertainment levels at the bottom. A two level basement contains a wine room, mechanical equipment and general storage.

The Robertson Residence is conceived of as a vertical object, sited in counterpoint to the strong horizontal proportion of the lake - a man-made object, set in contrast to a vast, natural, Montana landscape. In fact, contrast is a theme that permeates the design of this building.

In plan, the building derives from a forty foot by forty foot square that appears to extrude from the ground as a base of concrete block that matches the rock outcroppings in color and texture, but contrasts with the stark rectilinear geometry of masonry units. An axis, perpendicular to the lakefront is introduced as an ordering element that orients circulation and primary volumes to the drawing force of the dominate view. The upper levels evolve as a composition of subtractive, acrylic stucco and glass elements, organized within a four foot, three dimensional grid. Large window walls on the West elevation are symmetrically composed within asymmetrical solid forms and penetrations that comprise the other elevations. Additive elements are defined by a circular arc that mimics the panorama of the landscape and are expressed as steel framed decks that, in their juxtapositioning, architecturally amplify movement from inside to outside.

From the parking area adjacent to the existing garage, the house is approached down a path and across a twenty eight foot bridge that spans to the entry like a gangplank to a ship. At the top of the building, one is lead by light from a protected entry vestibule into the stairwell and down to the main living areas along the axis of principal view. The spatial sequence expands and contracts with arrival and departure at every level, with the living area as the primary experience of space and view.