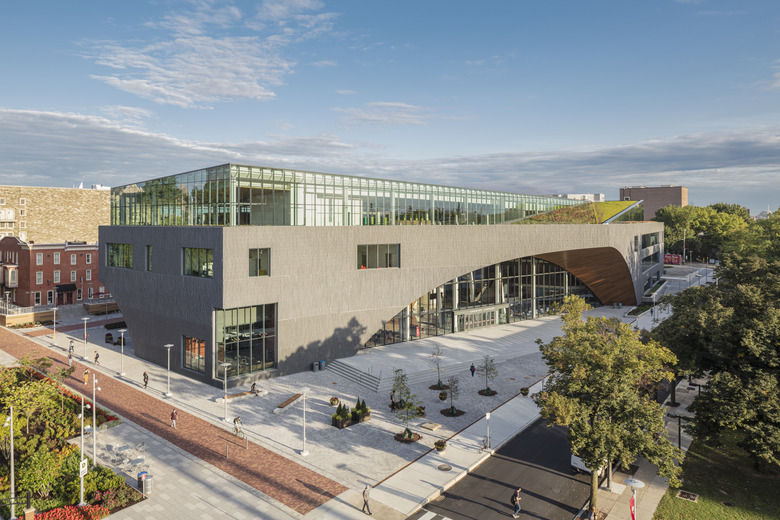 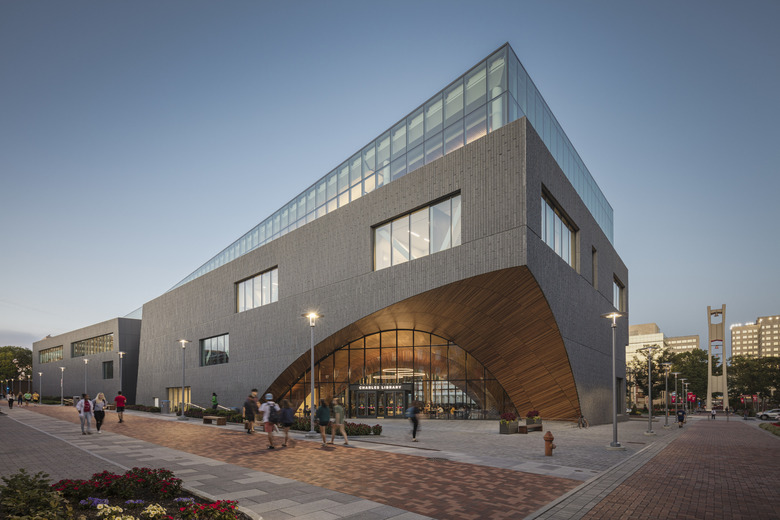 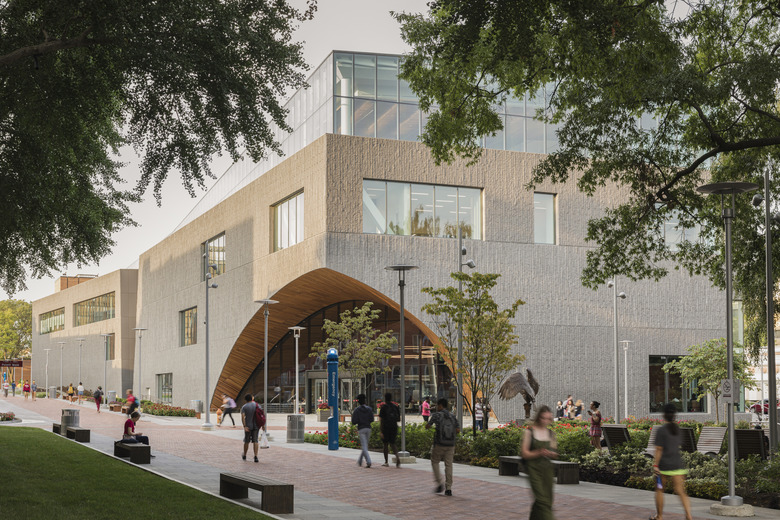 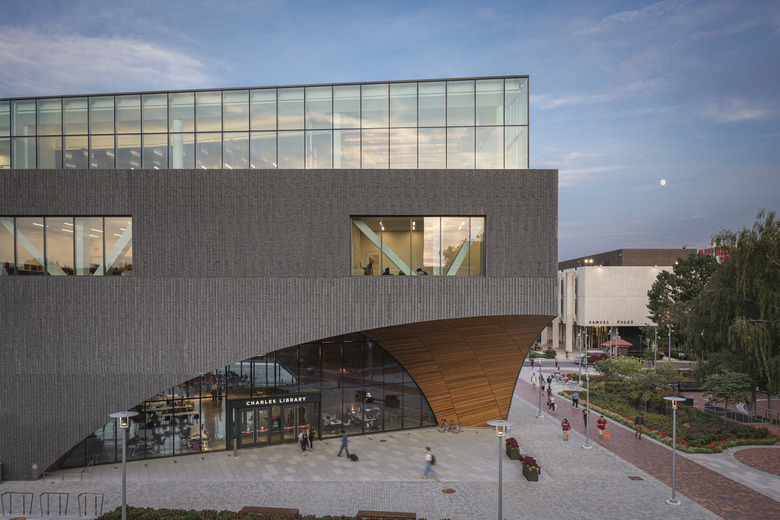 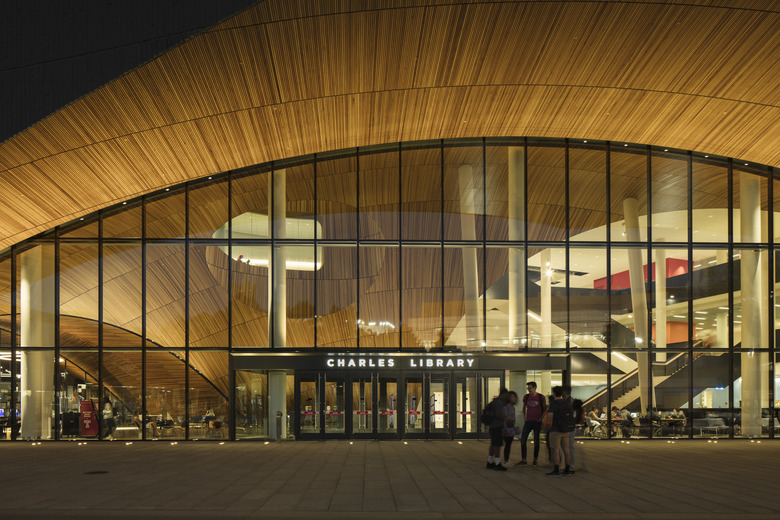 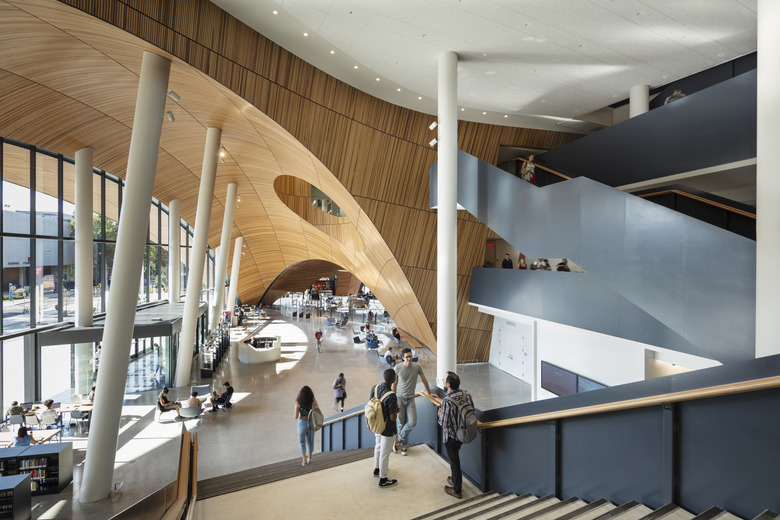 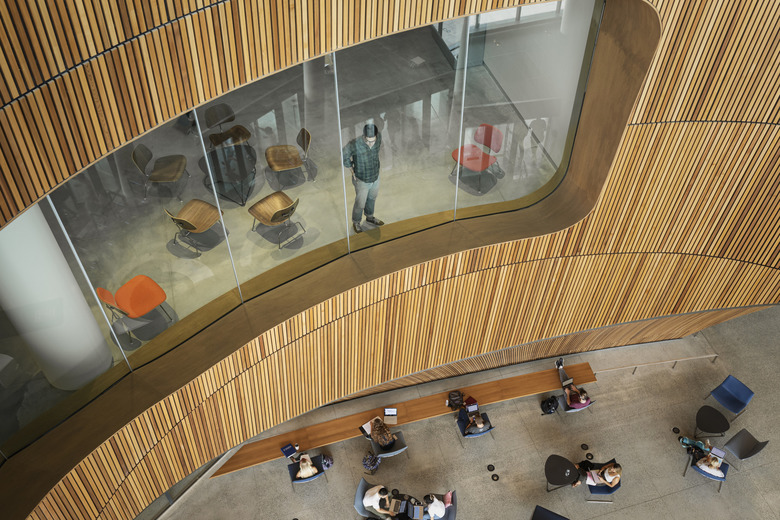 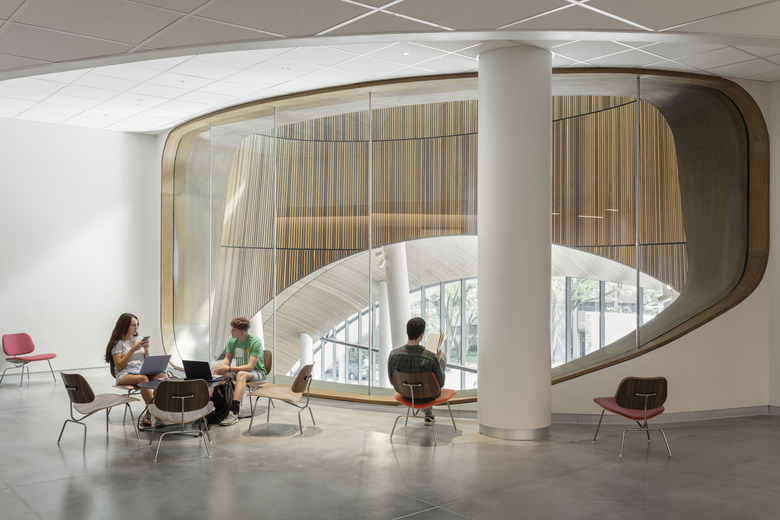 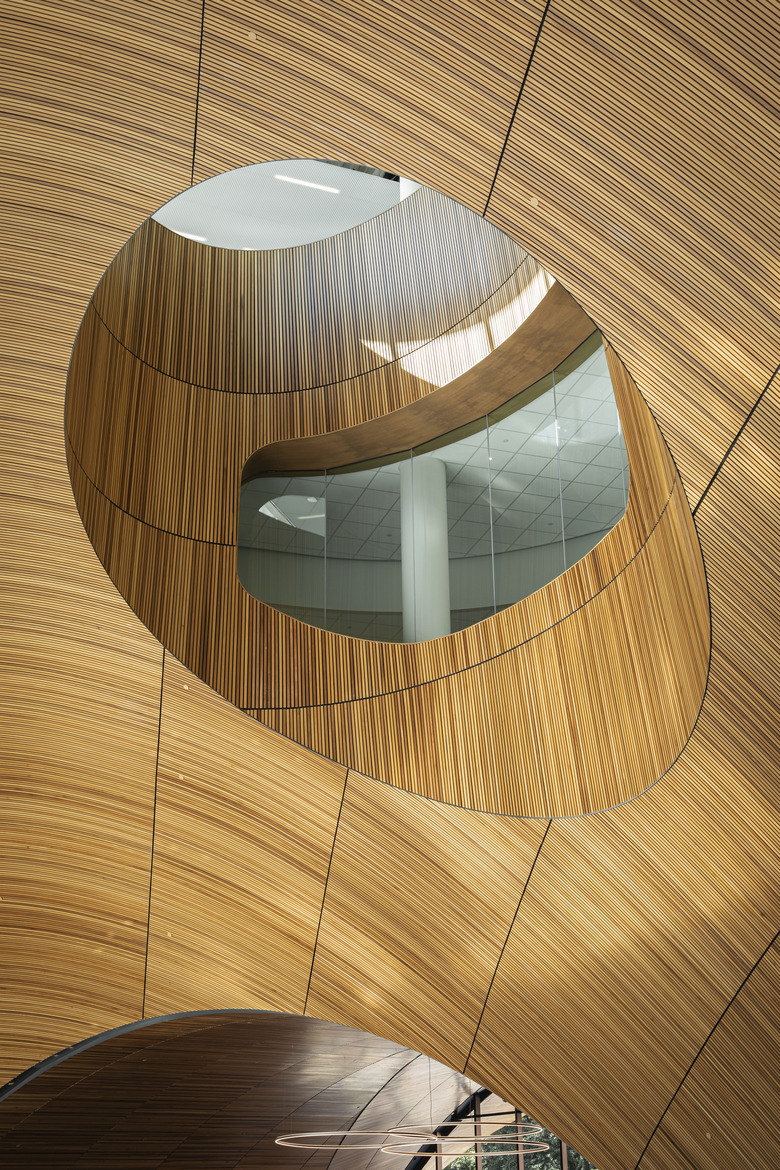 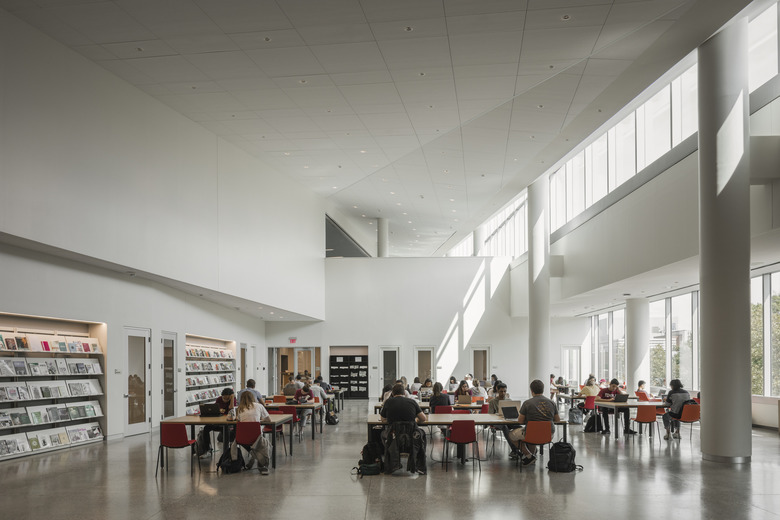 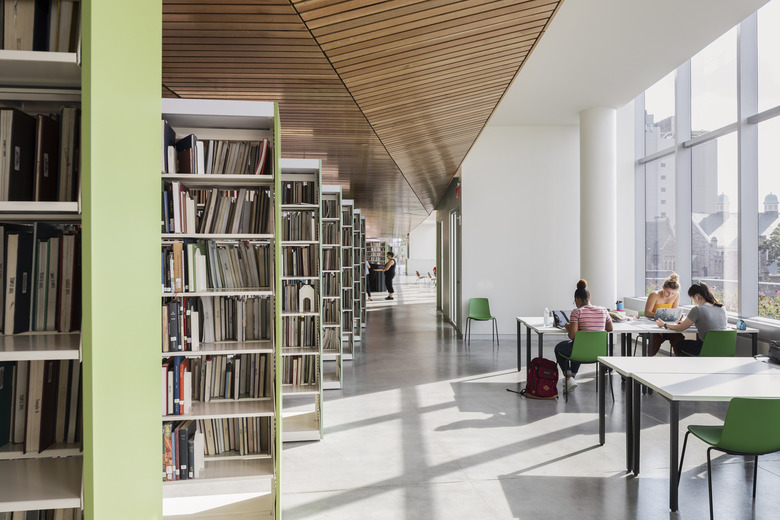 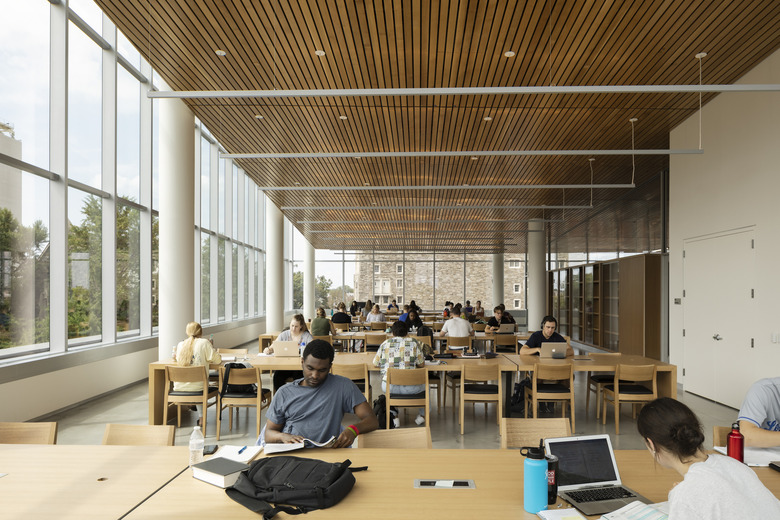 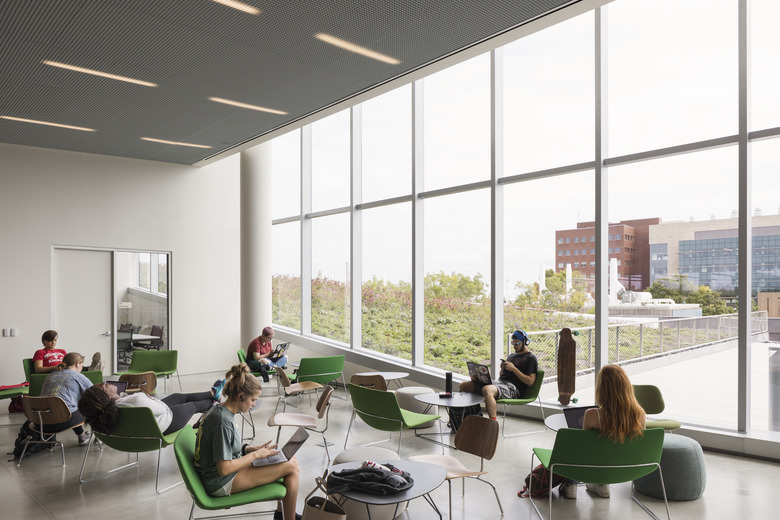 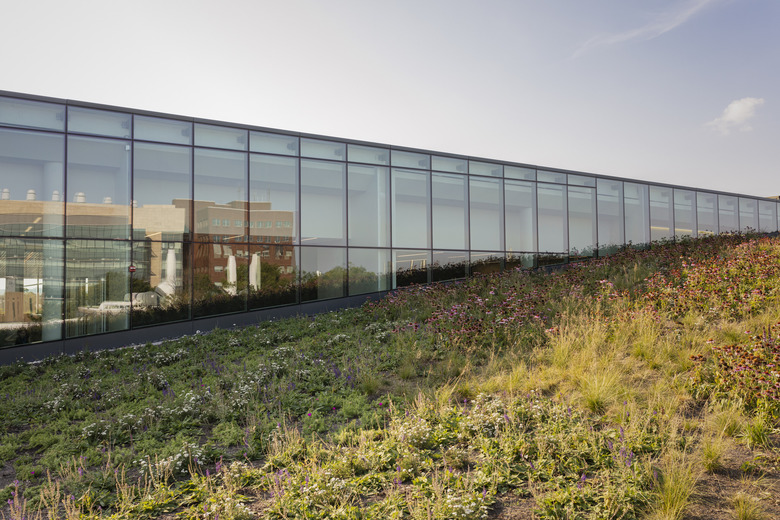 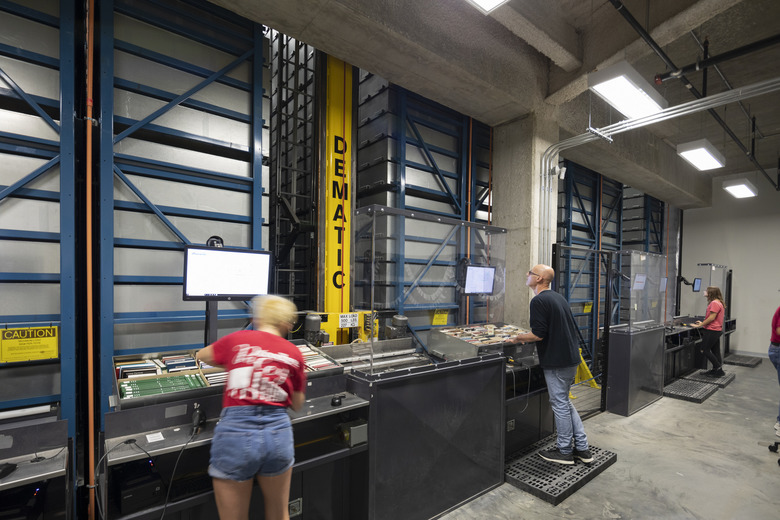 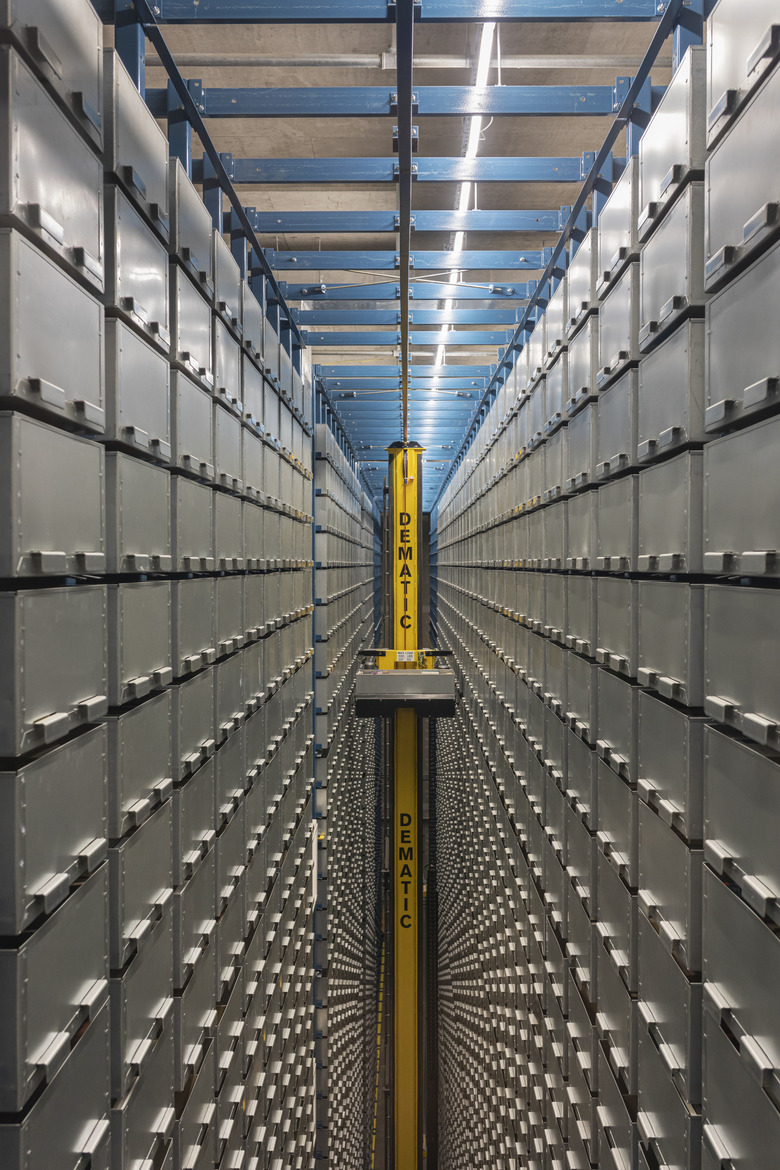 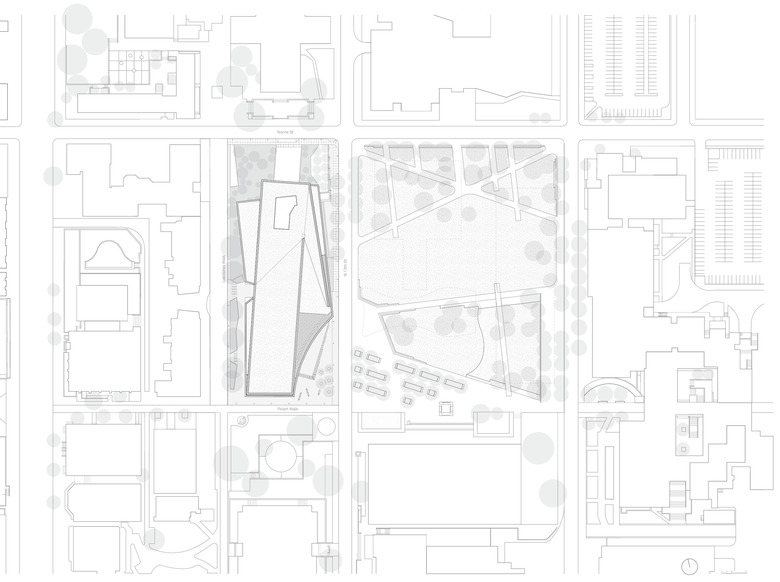 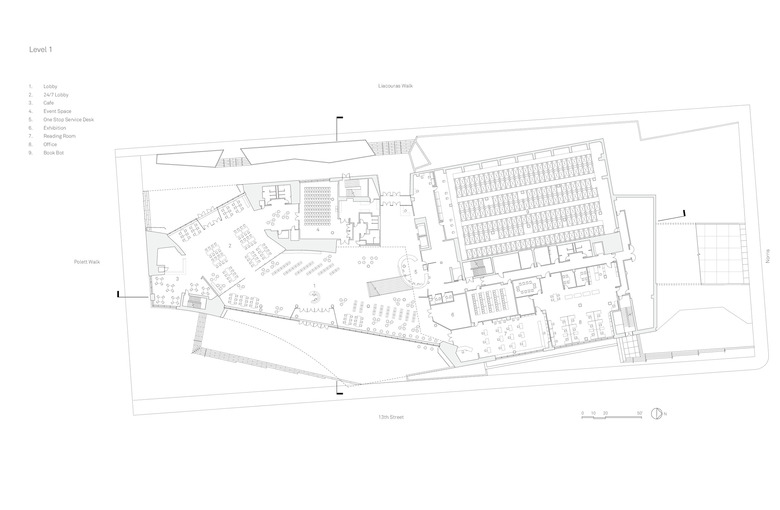 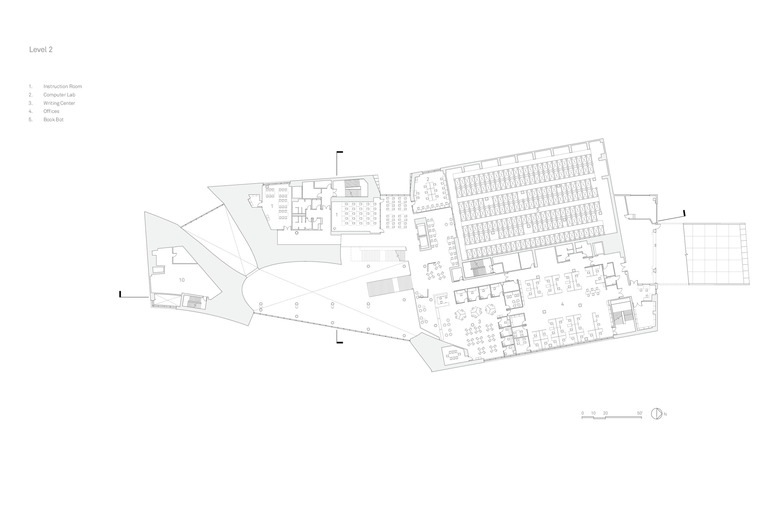 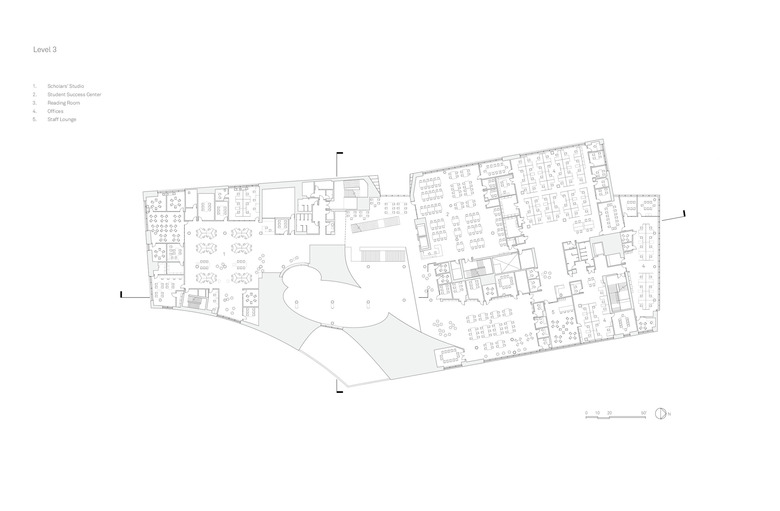 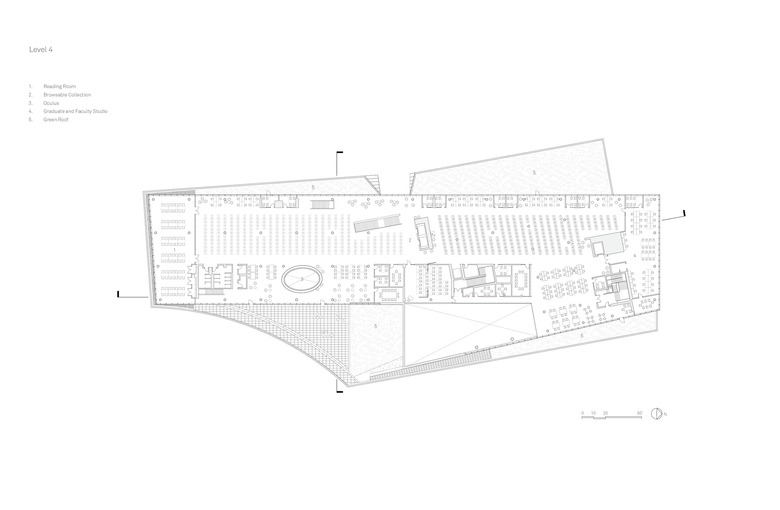 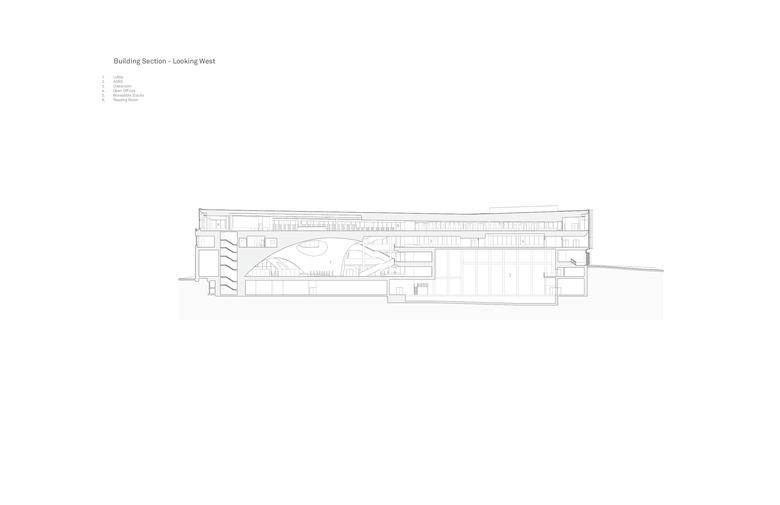 The new Charles Library at Temple University has opened its doors for the start of the Fall 2019 semester. Sited at the intersection of two major pedestrian pathways, Polett Walk and Liacouras Walk, and at the nexus of Temple’s Main Campus, the project anchors a new social and academic heart for the university’s diverse student body of over 39,000. Woven into the fabric of North Philadelphia, the building sits just one block off of Broad Street, the connecting artery to the city. Within its dynamic urban context, Snøhetta’s design, developed in collaboration with Stantec, reinterprets the traditional typology of the research library as a repository for books, integrating the building with a diversity of collaborative and social learning spaces. And in offering more than double the amount of study spaces than its 1960s predecessor, Paley Library, the 220,000-square-foot Library anticipates over 5 million annual visitors. By uniting a plethora of academic resources, disciplines, and cutting-edge technology under one roof, Charles Library stewards Temple’s progressive mission to provide equitable learning experiences for its students, its faculty, and the surrounding community.
The landscape and site strategy capture this public-facing role, with generous plazas that slope up to the library entrances, not only inviting people in but also providing space for outdoor classrooms and informal gatherings. The building’s solid base is clad in vertical sections of split-faced granite, referencing the materials of the surrounding campus context. Grand wooden arched entrances cut into the stone volume and announce a welcoming point of entry. Expanses of glass create maximum transparency at the three major entrances. The soaring arches continue into the building, forming a dramatic 3-story domed atrium lobby. Within the central atrium is a 24/7 zone, as well as computing workspaces available to Philadelphia residents. The building’s arched entries and expansive plazas extend a welcoming invitation to all visitors, and while its unusual geometry expresses a distinct identity, its massing is carefully attuned to the scale and materials of its neighbors.

The lobby’s domed atrium offers views to every corner of the building, serving as a wayfinding anchor and placing the user at the center of the library’s activity. An oculus carved into the expansive cedar-clad dome allows light to pour into the lobby from the uppermost floor, connecting the terminus of the library back to its beginning. The steel- clad main stair is immediately visible from the entry as it winds up to the highest level of the building, inviting people to climb upwards. As people move through the building, this visual and physical connectivity allows them to maintain their bearings and encourages usage of all of the building’s resources.

At the base of the main stair, the one-stop service desk provides the first interface between library staff and students, and facilitates their access to the library collection, stored primarily in the high-density automated storage and retrieval system (ASRS), affectionately termed the ‘BookBot.’ At fifty-seven feet tall, it spans three levels of the building and currently stores 1.5 million volumes with a capacity of nearly 2 million, allowing holdings previously housed in off-site deep storage to be relocated on-site. By drastically reducing the space required for book storage while also expanding access to the Library’s collection, the BookBot enables increased space for collaborative learning, academic resources, and individual study space.

To that end, the library’s design houses multiple partner programs and academic resources under a shared roof, while responding to the demonstrated need for increased seating. Anchoring the second and third floors are the Student Success Center, which offers writing and tutoring support; the Loretta C. Duckworth Scholars Studio, with access to digital fabrication and immersive technologies; and Temple University Press. Charles Library is also committed to an all-mobile technology strategy, offering laptops and charging banks on every floor, which in turn liberates workspaces from being locked down by traditional desktops as the technological needs of the students continue to adapt. More than 40 meeting rooms and study spaces, interspersed throughout the building, are available for reservation. In welcoming students from all departments, and offering access to cutting edge technology and a variety of study spaces into a centralized location on campus, these resources will be more accessible than ever to the student body.

While the library offers a uniquely diverse space program tailored to the emerging needs of contemporary students, it also offers the focused research experience of traditional academic libraries. The serene, sun-filled fourth floor encourages visitors to meander through the stacks of the library’s browsable collection. Roughly 200,000 volumes anchor the center of the room, while more private study spaces line its perimeter. Balancing the north and south ends of the fourth floor are two expansive reading rooms, dedicated to graduate, faculty, and undergraduate study. Glazed on all four sides with glass, with views out to the lushly planted green roof, the fourth floor offers an unexpected retreat that feels embedded in nature. Conceived as an amplified meadow landscape, ornamental grasses and herbaceous perennials form the foundation of these reading gardens, through which drifts of curated flowering species and bulbs emerge punctuating color and interest throughout the year. The roof gardens, composed of upwards of 15 different species, provide rich urban habitat for pollinators and a calming visual foreground to the views of the campus and city beyond from the interior of the library.

Covering over 70 percent of the building’s roof surface, the 47,300 square-foot green roof is one of the largest in Pennsylvania and also plays a key role in the site’s stormwater management system. The Charles Library site at large is designed to capture and retain a maximum amount of rainwater not only from the Temple campus but also from Philadelphia’s aging infrastructure, which has been historically overburdened during storm events. Designed to meet the progressive Philadelphia Water Department guidelines, the library’s stormwater management system includes the green roof, pervious paved plazas and paths and landscaped planting beds that infiltrate rainwater, and two underground catchment basins that together can store and process nearly half a million gallons of water during storm events. Taken altogether, the project manages all rainwater runoff on the roughly three-acre site, as well as for an additional acre of offsite impervious ground.

Charles Library embraces the needs of contemporary students and evolving models of learning. By enhancing the visual and physical connectivity to academic resources and fostering learning through social interaction, the design inspires students to engage more directly with the library’s activity. It also marks one of the largest investments in new facilities in Temple’s history and serves as a central point of intersection between students, faculty, staff and the surrounding community. As a world-class facility for Philadelphia’s only public university, the project marks a transformative moment not only for the Temple University but also for the city, and for academic libraries around the world.