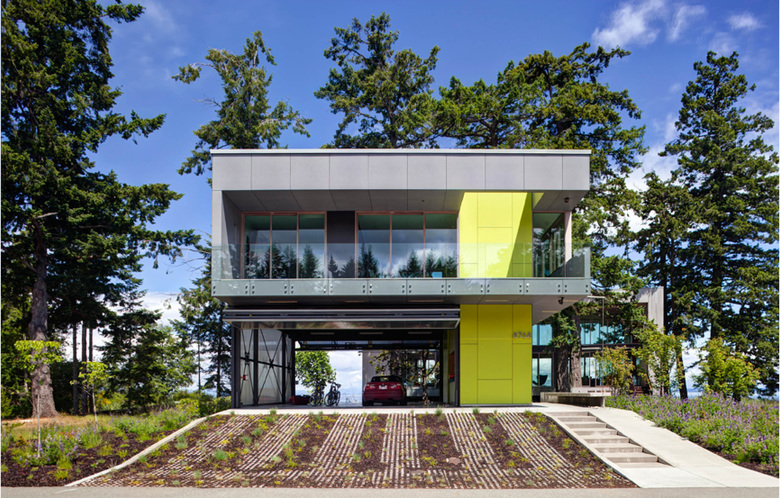 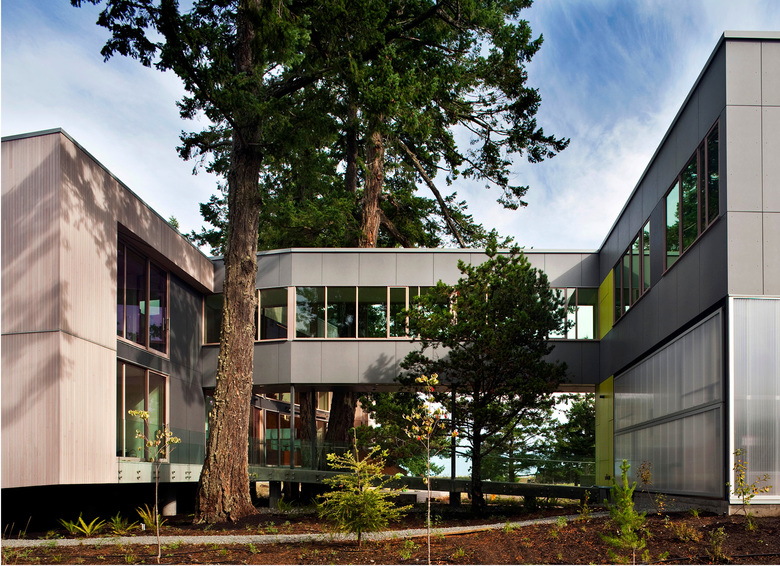 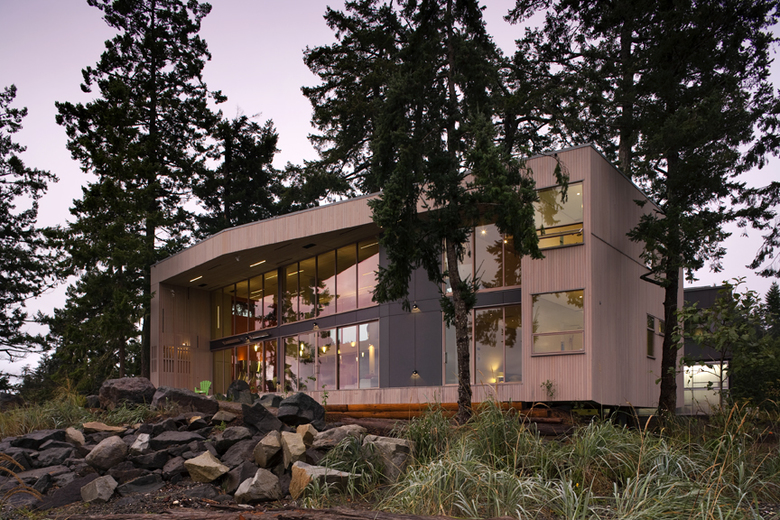 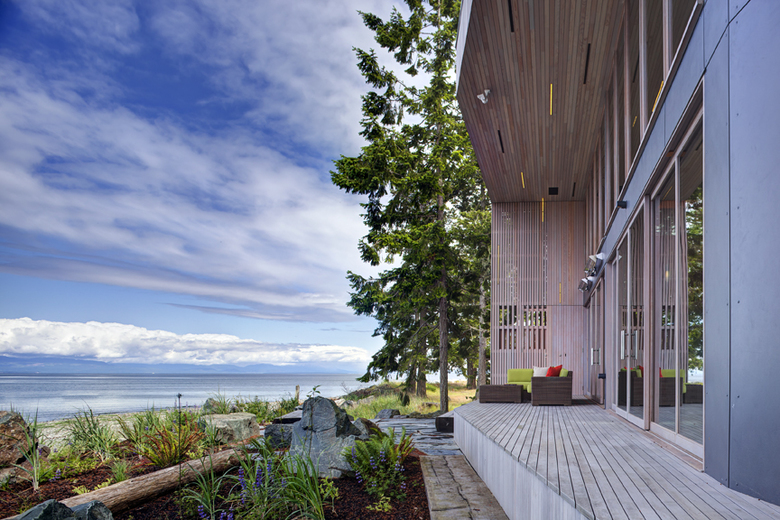 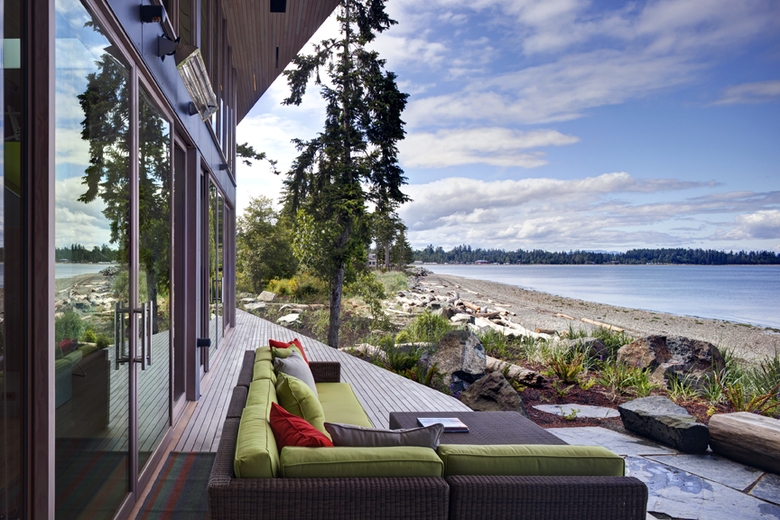 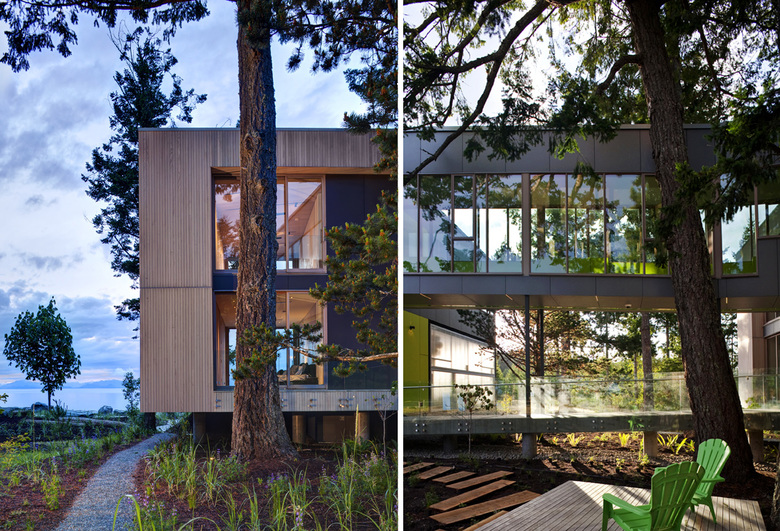 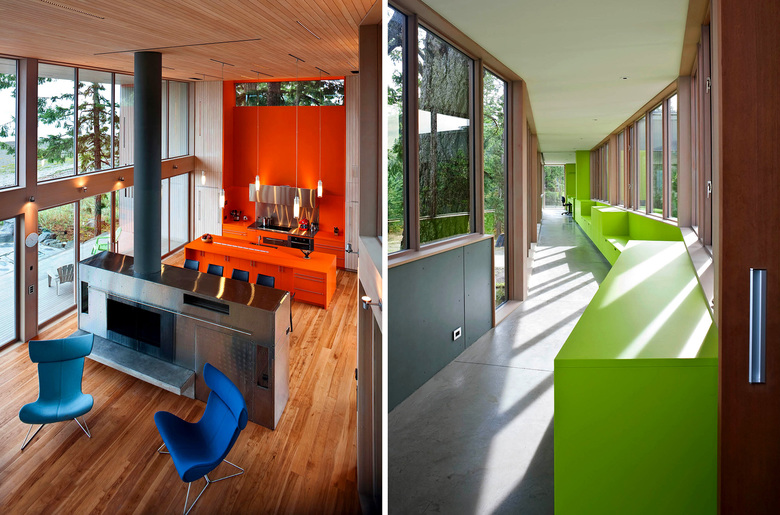 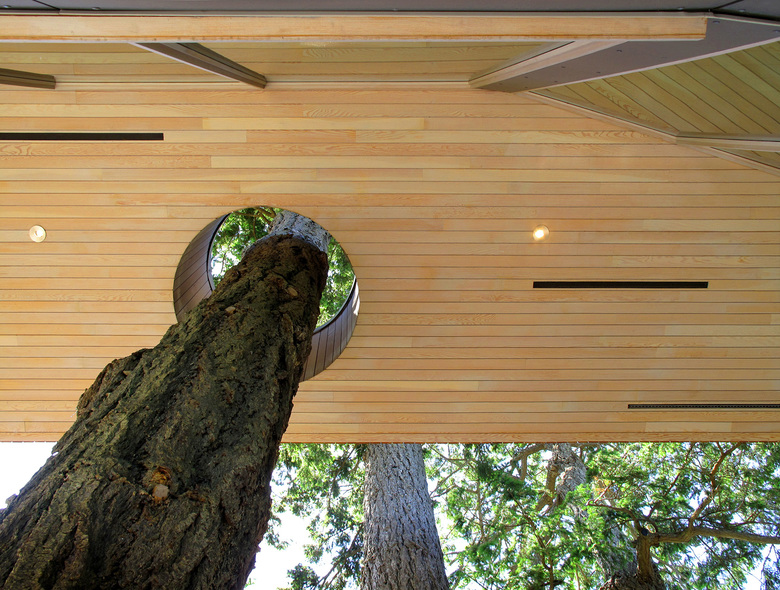 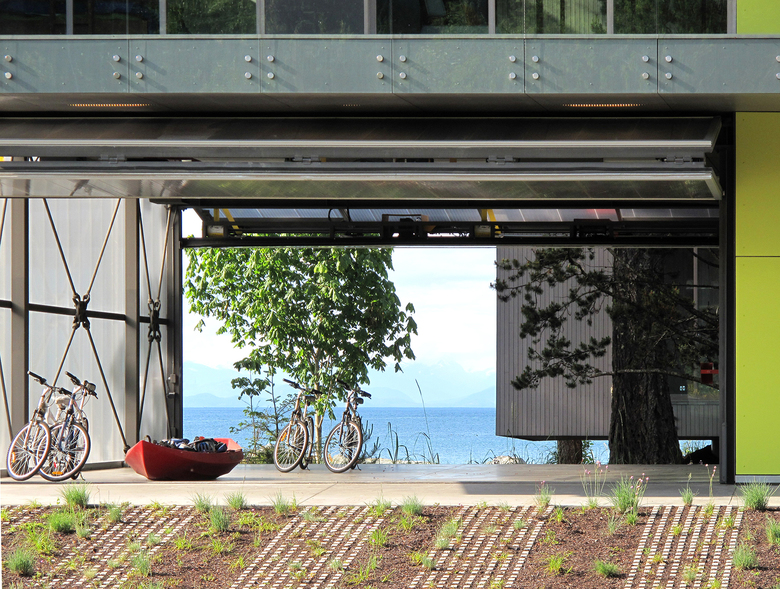 Vancouver Island comprises 300 linear miles of temperate rainforest biome ranging from snowy peaks to wild beaches. The project site, rising just three meters above sea level, forms part of a protected riparian coastline in the heart of the wind-swept Oyster River Basin flood plain.  The geometric dwelling acts as two organically interconnected frames, one mineral and one of wood which float above a virtually undisturbed site between one of the world’s richest marine tidal ecosystems to the northeast and a wetland preserve to the southwest. The extremely limited lot was dominated by a traversing grove of 350-year-old Douglas fir trees into which the home was surgically inserted in order to share their shelter which provides essential habitat for bald eagles and a host of other wildlife.

Preserving these majestic trees and pristine coast became a departure point for the siting strategy and formal language of the house and landscape.  Existing setback requirements intended to protect the riparian habitat conflicted with this goal and needed to be amended.  By proposing an elevated, split volume the central tree stand could be saved while the undisturbed ground upon which their roots depended could be protected by an integrally vegetated seawall developed in collaboration with the Federal Oceans and Fisheries department and coastal engineers allowing the owner and his young family to restore the shore with native vegetation while securing the needed development variance.

Two interconnected buildings protect and reinforce the stand of giant firs while accommodating a hybrid program. The Main-house, is an isolated wood tube, comprised of two bedroom suites set off of a double-height living area, which creates an giant aperture framing both the Canadian Rockies (across the Georgia Straight) and the coastal wetlands (to the landward side). While - a semi-enclosed bridge extends through the trees from the seasonally closable Guest house (cement clad landward frame) under which cars may park in an unconditioned porte-cochère concealed by folding translucent panels.

Vehicles are confined to the road “pad” (which is the only part of the house that sits on grade)  protected by the elevated Guest -house volume. As the entry threads through the four-foot-diameter tree trunks towards the waterfront it rises seven feet into the air (above the flood plain). A series of piloti, each individually surveyed and hand-excavated, avoid the tree roots below  supports the Main house, allowing water and air to reach the soil below, thus creating a “transparent footprint” that minimizes the structure’s impact on the native ecology, particularly the trees. The low-impact vegetated seawall, built into the existing waterfront boundary, capitalizes on existing topography to break storm-swell energy.  While supporting and enhancing the riparian habitat,  It also provides exceptional protection against coastal erosion and is designed to enable the beach and littoral zone to develop and thrive over time.

The material palette is drawn from the rocky beaches that form the site’s shifting boundaries. The Main house is clad in the local Douglas fir with deep protective eaves, stained grey to match the sun-bleached drift wood logs that litter the coast. Program elements such as interior baths, outdoor showers, storage, and kitchen cabinetry are all integrated into this thick rain-screen “frame”.  In contrast, the elevated Guest house is mineral in nature poetically connected to the land it is constructed of fiber-reinforced concrete siding and steel.  It hovers on a skeletal steel volume enclosed with translucent, thermo-plastic doors, which form a ghostly diaphragm at night.

Woven through the raw palette of glass, concrete, wood and Corten steel are two strong color gestures.  A green line traces the entry path from the guest house, along the bridge, and to the main house becoming a luminescent line of green glass, lighting the visitor’s path along the breezeway ramp to the front entry. In contrast to this horizontal linear expression, a bold orange vertical excavation of the frame, accents the kitchen and provides a second  bright counterpoint to the long, grey winters, north of the 49th parallel.

Understanding riparian ecosystem cycles and their re-establishment patterns, and leveraging the site’s qualities in a careful and sensitive manner was essential to the design and construction of the Saratoga Beach House.  Before construction began, mulch padded access roads were built between the massive trees to protect the mature roots from heavy equipment and compaction.  By honoring the site, the house dwells lightly on the beachfront, providing the unique spatial intimacy of being in and among the trees and in between the wild ocean and the soft wetlands. Through its tight geometry, restrained materials, and tall open spaces which frame the ocean and forest, the project creates an incomplete “room without walls” from which to enjoy the pristine landscape in an atmosphere of stewardship and ecological sensitivity.