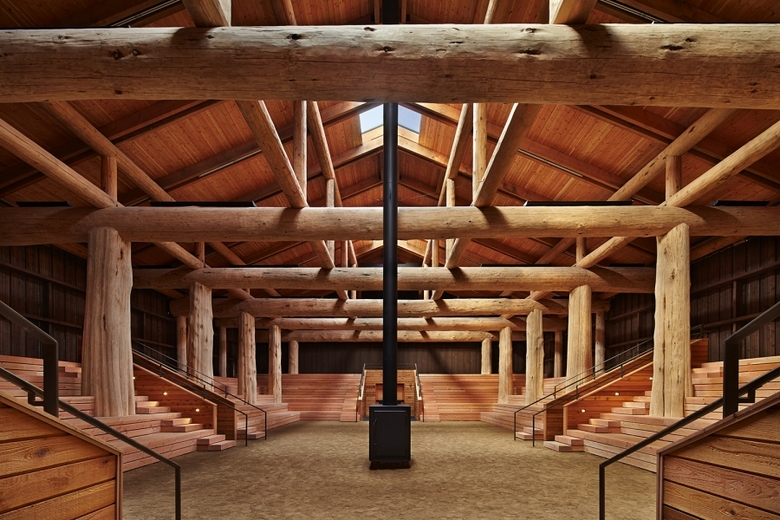 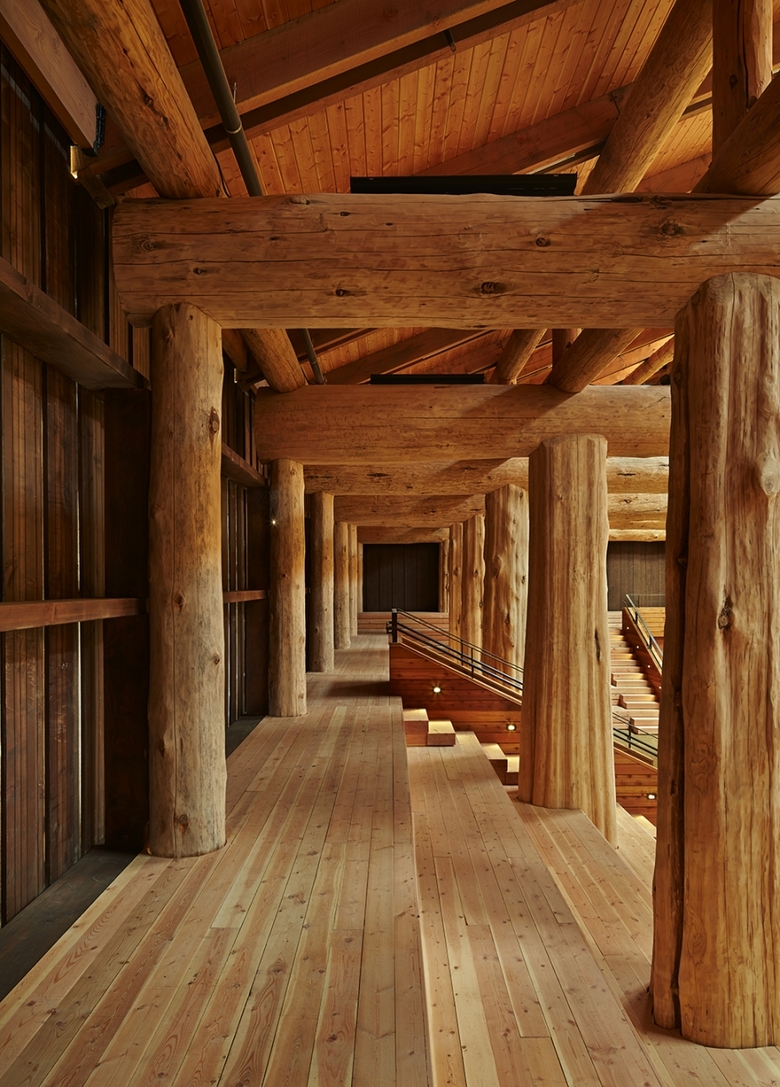 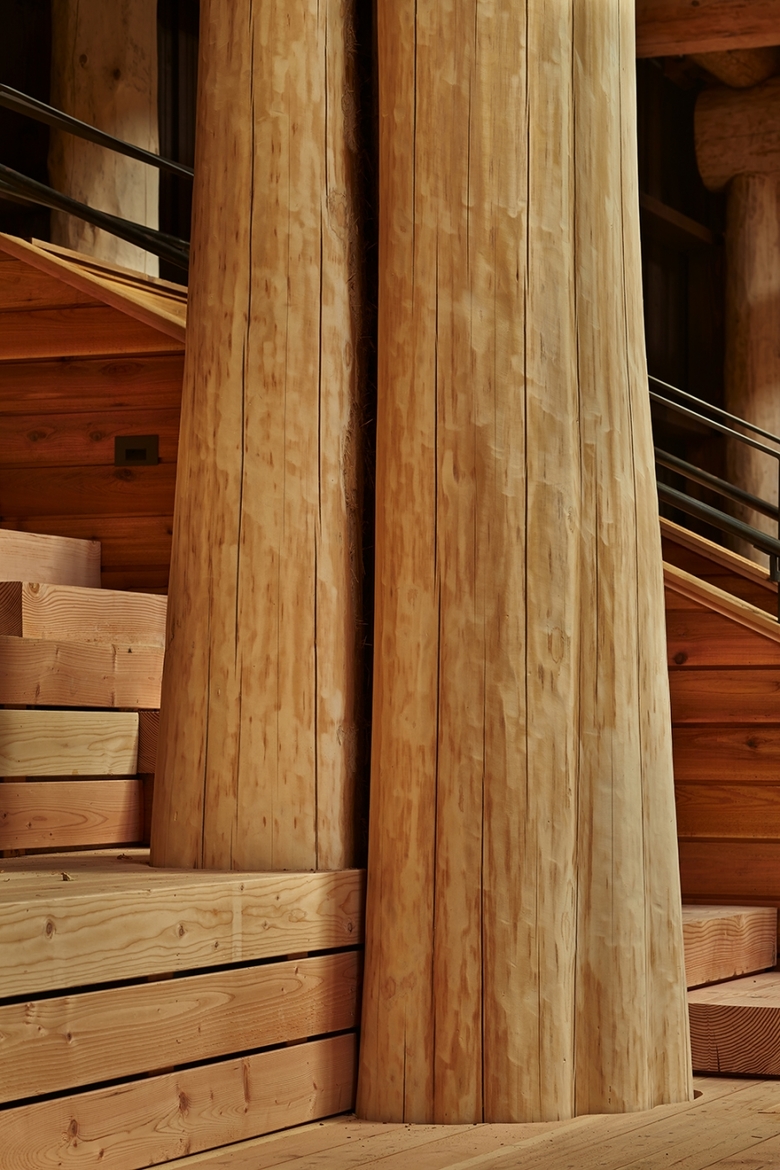 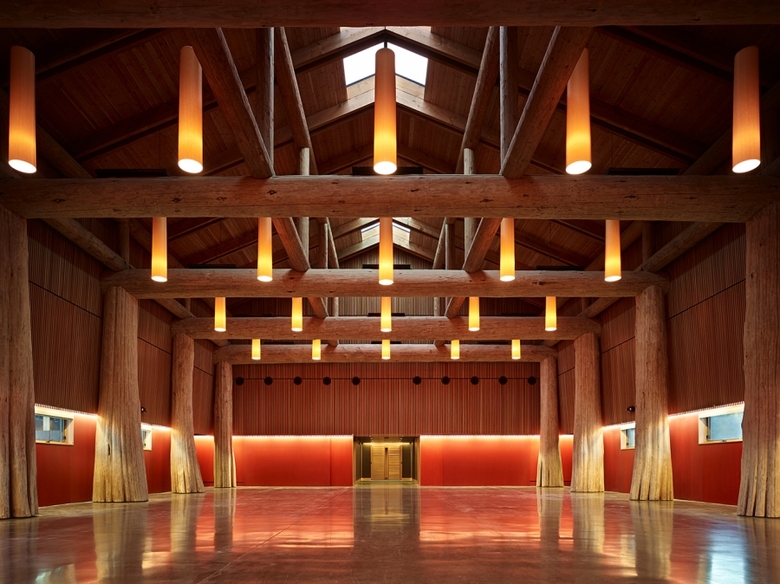 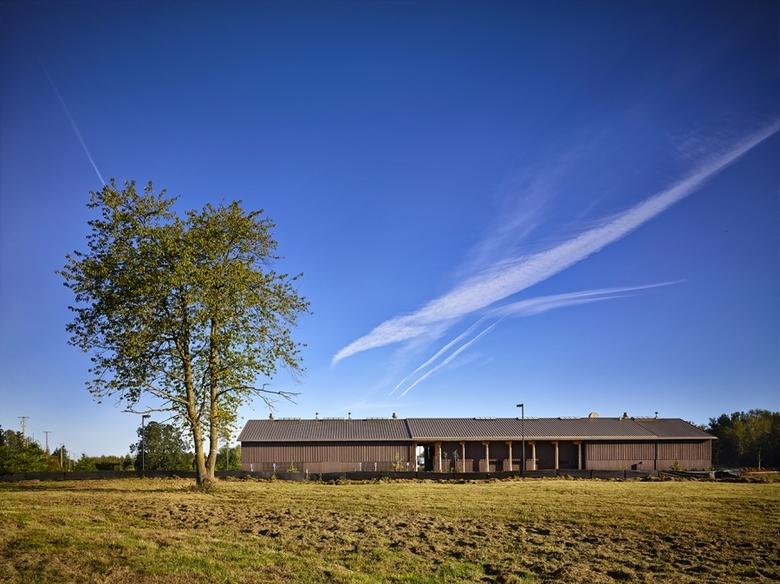 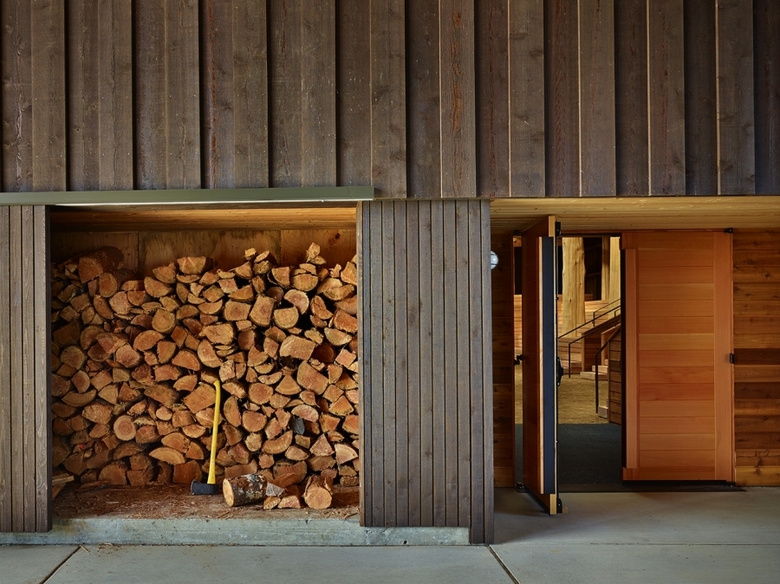 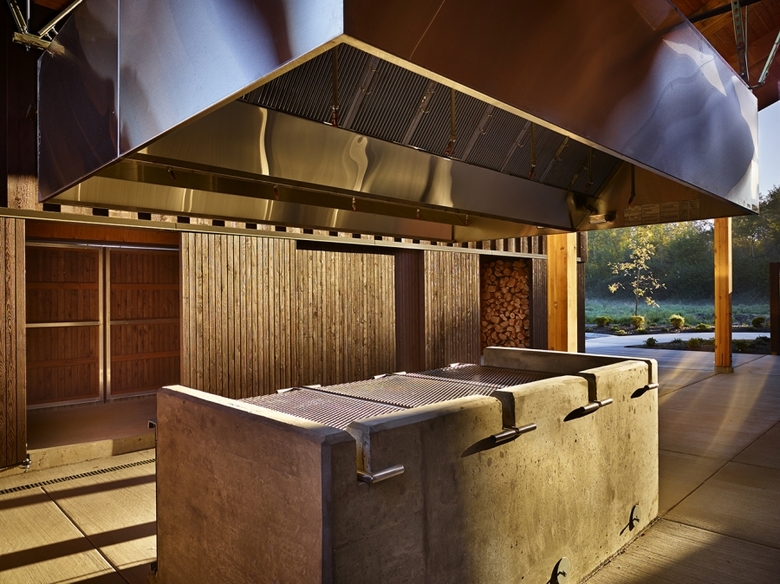 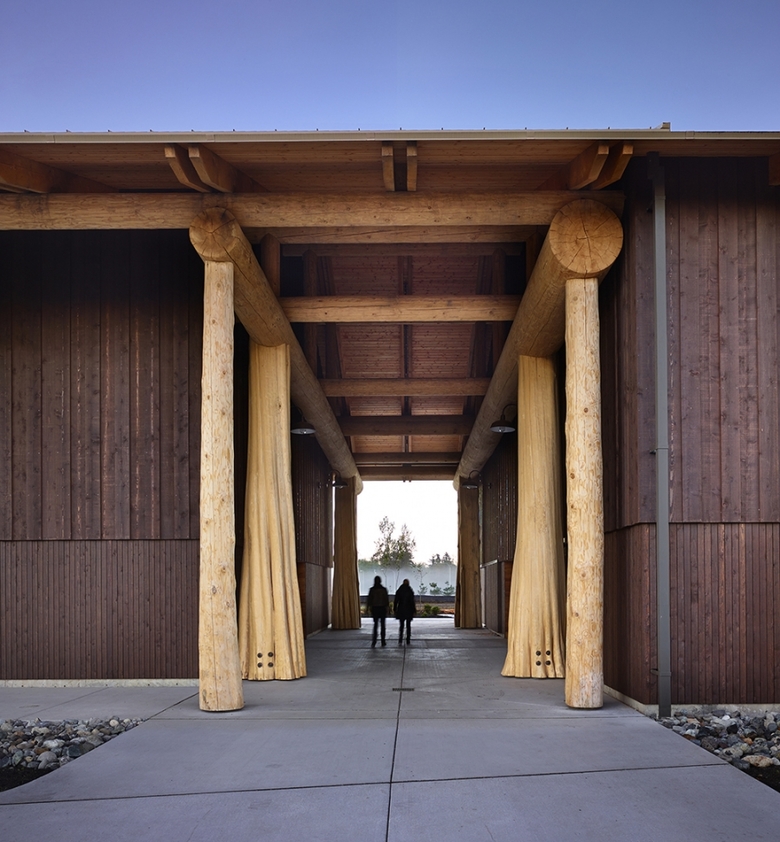 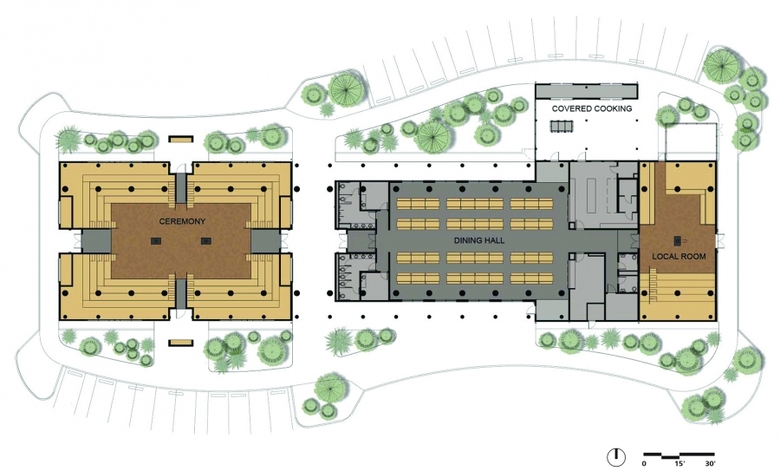 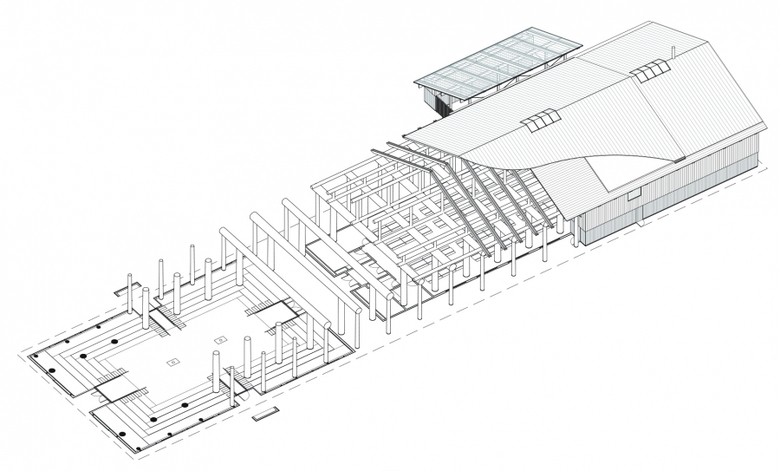 Wood in architecture is undergoing a 21st-century resurgence of sorts, finding applications from the thinnest of veneers to structural frames for mid-rise buildings. Most architectural applications utilize milled wood, which exhibits the grain and character of wood but does not convey the origins of wood as strongly as peeled logs. The latter can be found to great effect in Mahlum's design of a longhouse for the Muckleshoot Indian Tribe; Cedar columns flare at their base as they prop up the Douglas fir logs overhead. Wood prevails throughout, absorbing the warmth and smells from the rituals taking place inside. We asked Mahlum a few questions about their second project for the Muckleshoots.

What were the circumstances of receiving the commission for this project?

After developing conceptual plans and a budget, Mahlum was invited to interview for the project based upon a prior working relationship with the Muckleshoot Tribe’s historian on a K-12 school. The historian is a member of the Seowyn congregation who wanted to create a home for their faith. The congregation within the tribe had worked toward achieving this project for over a decade.

Please provide an overview of the project.

The Muckleshoots are descended from the Salish peoples of the Pacific Northwest and remain tied to the same waters, mountains, prairie and rivers. The historic villages of their ancestors were built along the banks of the Green and White Rivers, which once combined as the Duwamish before reaching Elliott Bay. This longhouse is dedicated to the practice of the Smokehouse faith, a traditional spiritualism also known as Seowyn.

The first longhouse on the Muckleshoot prairie in over a hundred years, the building blends with its modern agrarian context. Distinctly introspective in character, it is a private place for ceremony that does not proclaim itself. Rather, it reveals itself as the visitor is welcomed into the warmth of the interior.

The Ceremony Room is wood, earth, and fire. The rituals held in the Ceremony Room are sacred and very private. The dirt floors connect dancers to the earth as they weave between large wood stoves. Fires in the stoves keep out the cold. Massive cedar columns hold fir logs and timber roof framing aloft. Traditional drums and songs resonate through the space off the smooth wood surfaces. Few people from outside the faith are privileged to witness the events, and photographs of the congregants are not permitted.

Where the main Ceremony Room hosts up to 500 Smokehouse followers from Tribes throughout the region, the Local Room houses more intimate services for the members from the Muckleshoot Tribe.

What are the main ideas and inspirations influencing the design of the building?

The peeled log construction and long, gabled roof is reverent to the traditional longhouse structures of the Southern Salish peoples. Cedar is considered a gift to their ancestors because of the innumerable uses they found for it. Cedar columns stand sentinel in the ceremony rooms, their quiet strength connecting the congregants to this heritage. Cedar planks span between the columns sheltering the occupants from the chill winds outside. Doug fir was harvested for the logs, rafters and decking of the roof structure.

The dining hall forms the heart of the building. With the fully appointed kitchen and outdoor cooking area, the hosts can serve 250 guests at a time. Where the log structure in the ceremony rooms embodies the raw character of those spaces, the dining hall juxtaposes deep red tinted plywood, slender wood slats, and woven pendant lights, accentuating subtle movements in the logs encapsulated by decades of growth.

The Smokehouse was recently recognized with an AIA Seattle Merit Award. After a personal tour, one of the jurors commented: "It’s an intelligent translation that acknowledges contemporary construction, yet at the same time gives a sense of smell, of coldness, of the earth…It’s scaled in a way that it is caught between the human and communal. The structure was really quite compelling at multiple different scales and multiple different rooms.”

There is a strong sense of communal ownership of this new longhouse among all of the followers of the faith. An elder who spoke at the ground blessing in February of 2012 observed that this would be the first longhouse on the Muckleshoot prairie in more than 100 years. It is dedicated to the legacy of those who fought to preserve the culture and traditions of their Salish ancestors, and it is a gift that this generation will leave for their children.

The members of the committee worked toward achieving this project for over ten years, and it is seen by all as a critical step in the growing revival of the tribe’s customs. Winter is the traditional season of the longhouse. During the remainder of the year, families were dispersed over wide territories seeking resources from the sea, the rivers, and the mountains. Winter brought everyone back together to the shelter and warmth of the longhouse, to food stores and stories, songs and dances around the fires. The new longhouse now hosts the congregation’s gatherings and ceremonies and receives guests from the region’s larger Smokehouse community.

As the congregation has sought to re-establish and re-invigorate its cultural and ritual traditions, the design sought to revitalize a sense of continuity with their architectural roots.

Were there any significant challenges that arose during the project? If so, how did you respond to them?

The logs were gathered from the Cascade Mountains of Washington and Oregon. The structure was fabricated and pre-assembled in a log builder’s yard, then brought to the site for erection. The smokehouse is a layered assembly of hewn logs, sawn timber, and milled lumber. Cedar columns support Douglas fir header logs that span across the ceremony and dining rooms. Purlin logs run along the length of the building and support the rafter timbers. Tongue and groove decking and stud-framed walls complete the shell of the building.  Cedar siding and metal roofing are the only finish materials on the exterior of the longhouse.

The walls breathe through the cedar plank siding and the open slats of the seating tiers. Historic longhouses had open fires that vented through openings in the roof. The Muckleshoot Tribe opted for enclosed wood stoves for improved health and safety.

How would you describe the architecture of Washington and how does the building relate to it?

Often characterized by a large quantity of wood in its construction, Washington State architecture is as diverse as its landscapes and climates. The Smokehouse reinterprets the roots of the wood tradition by reaching to the historic precedent of heavy timber techniques. Forms developed over generations by the native peoples of the Northwest are reverently echoed in small details and the expression of materials.