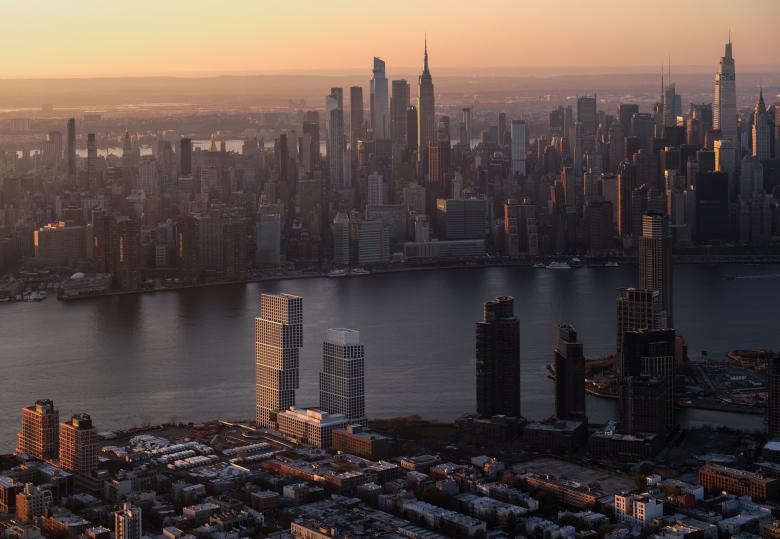 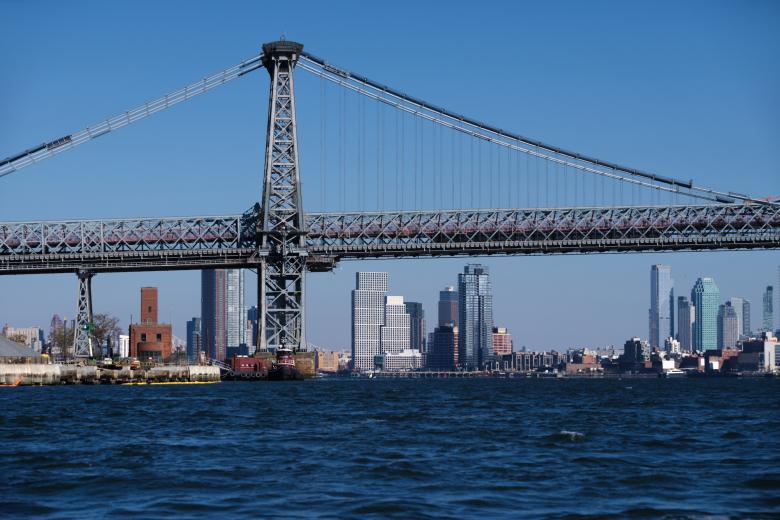 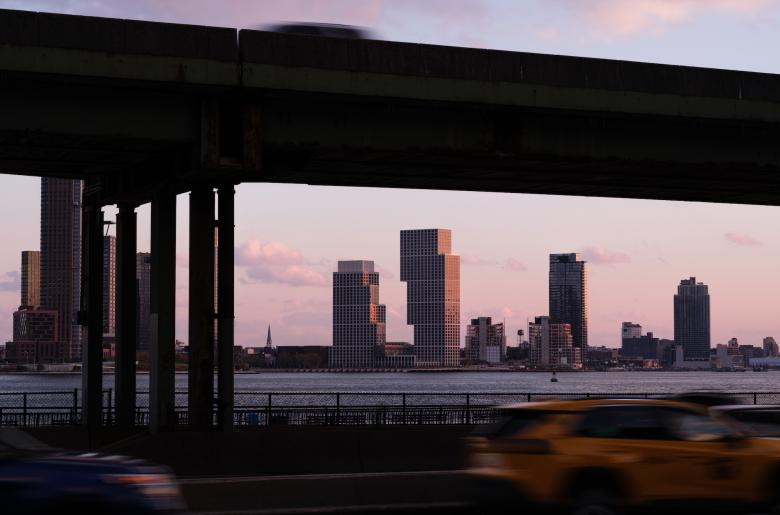 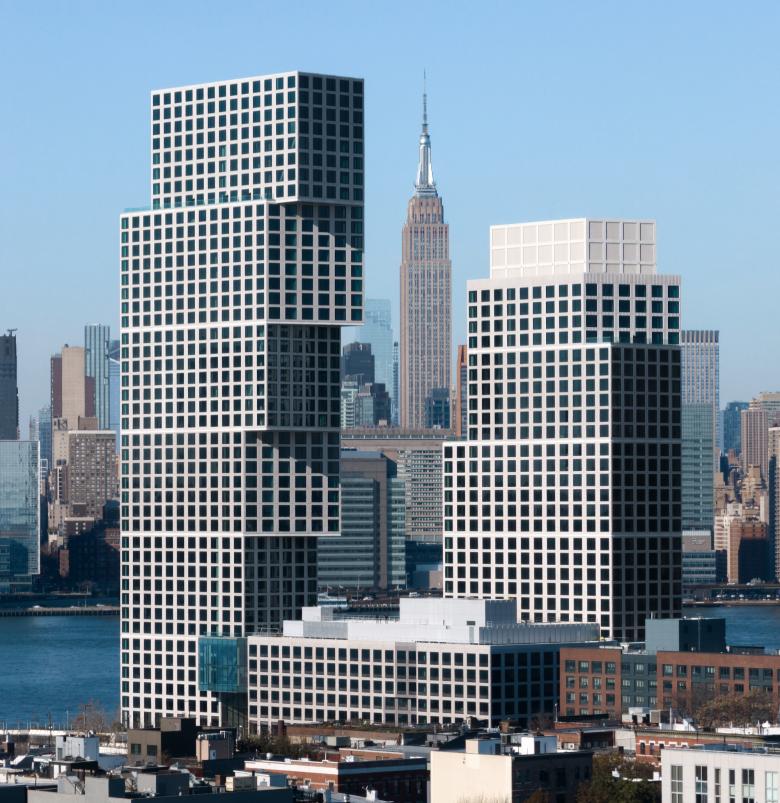 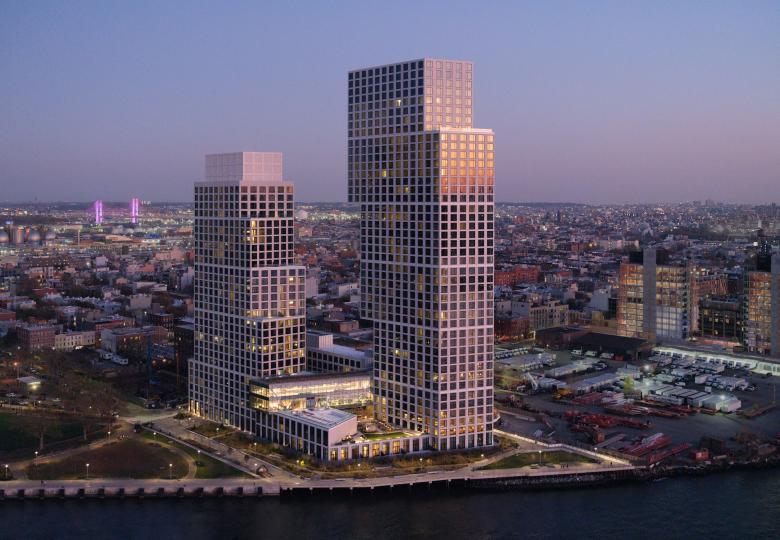 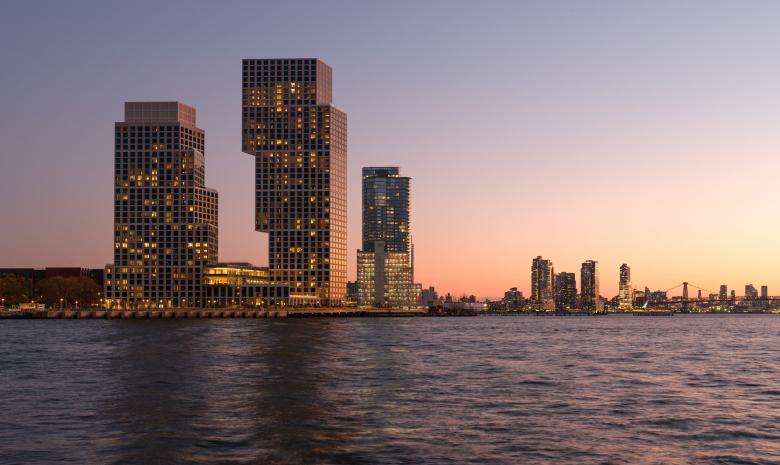 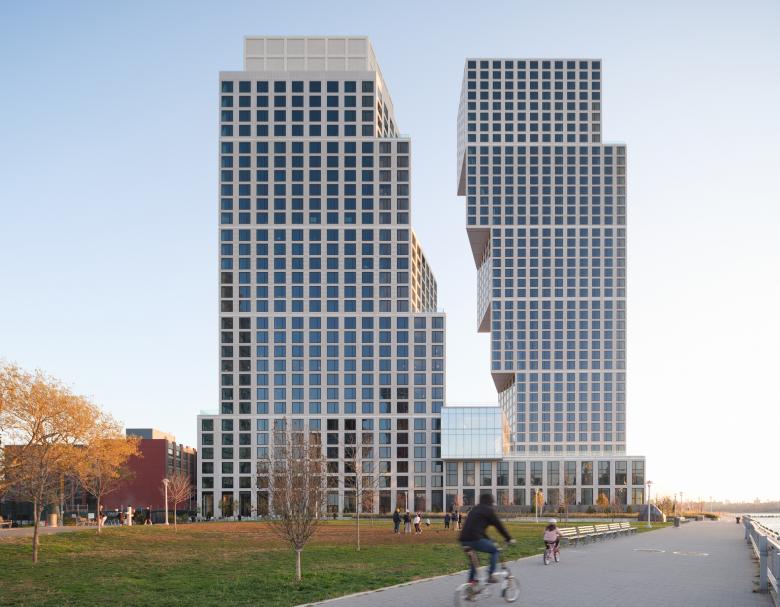 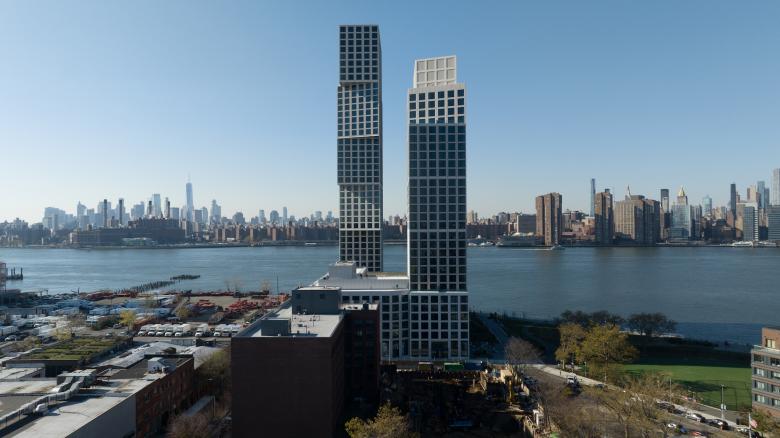 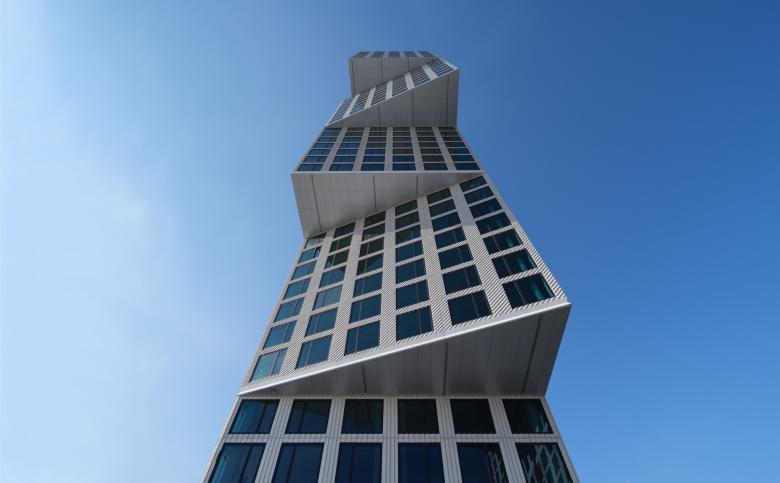 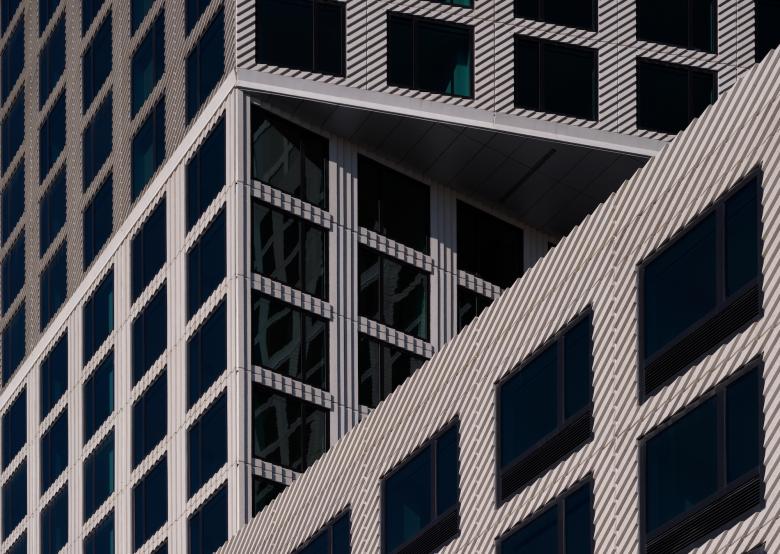 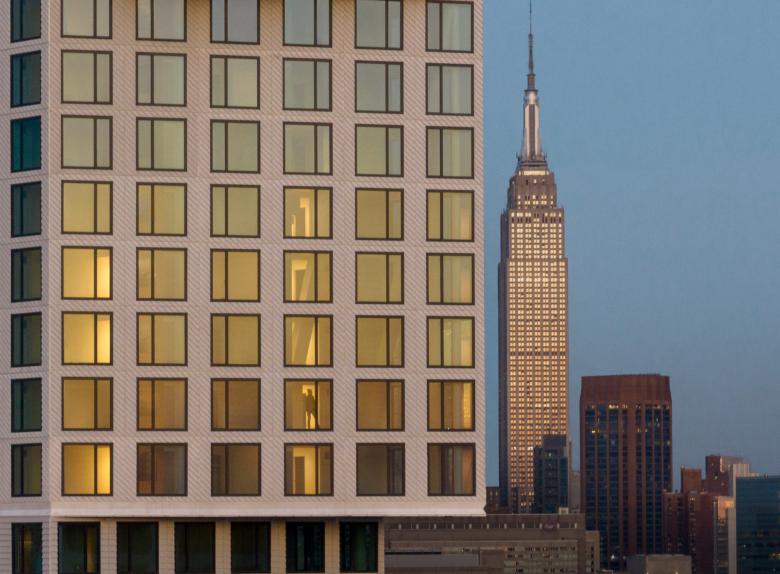 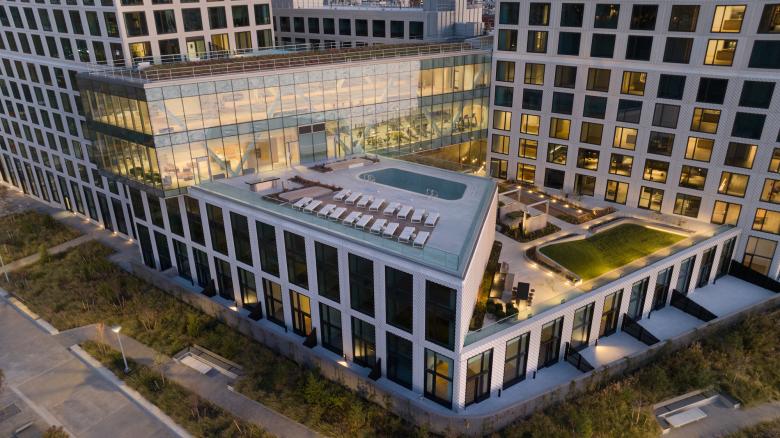 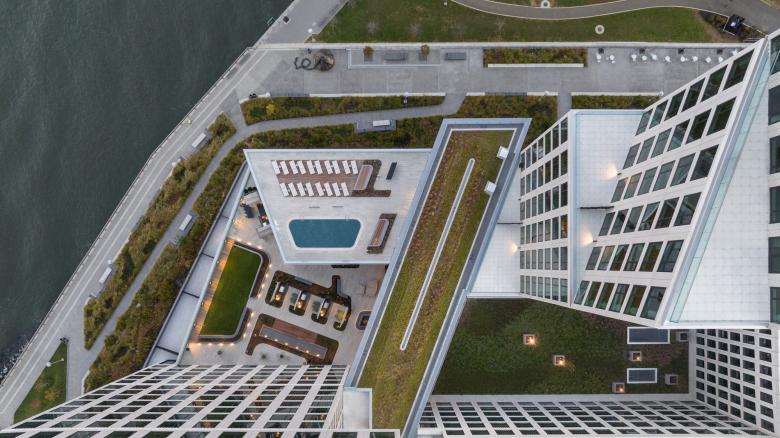 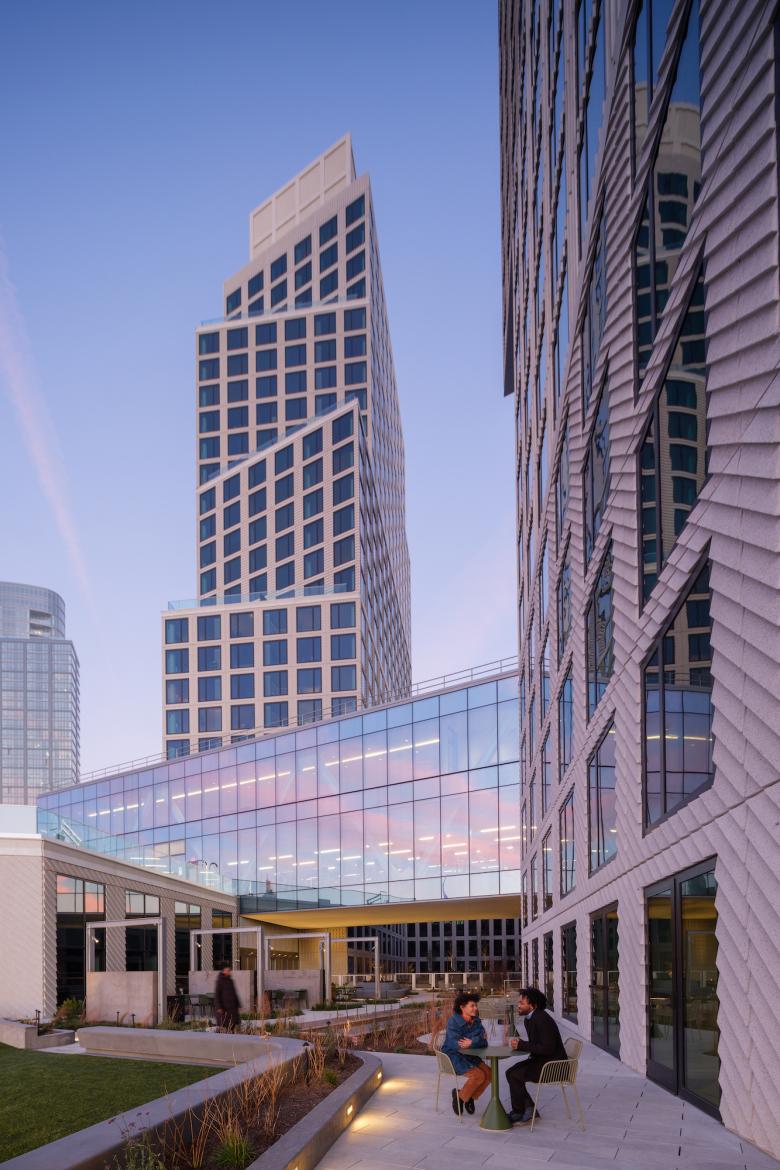 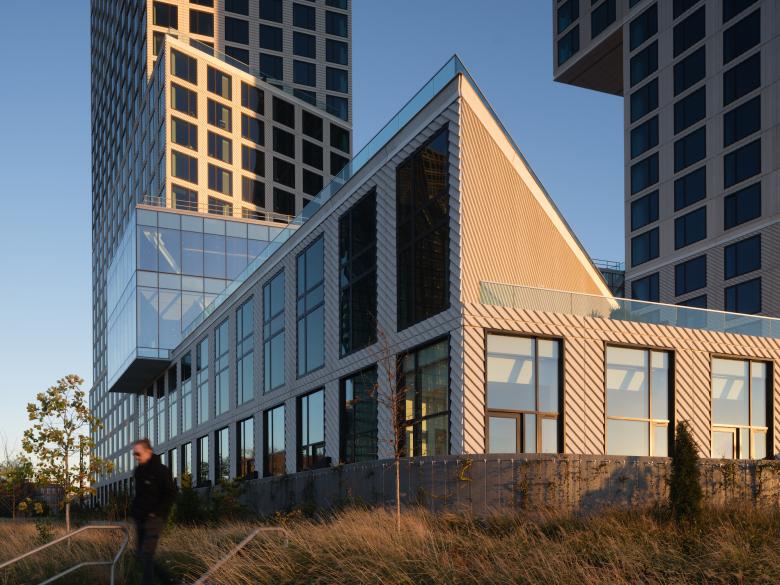 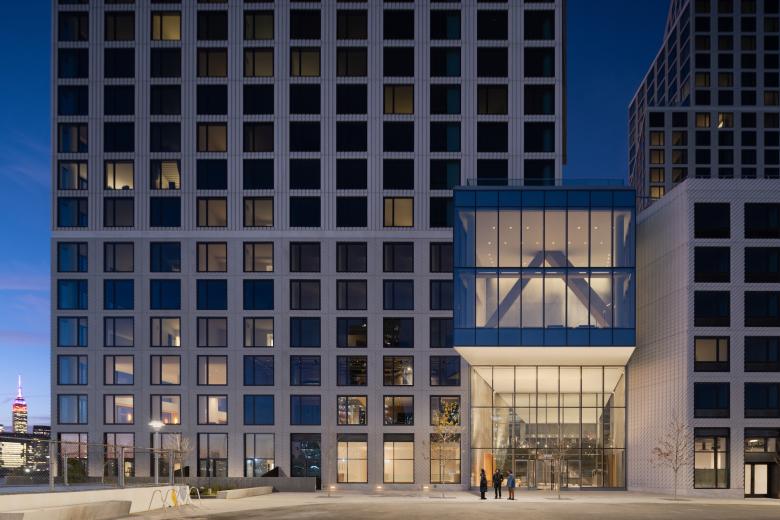 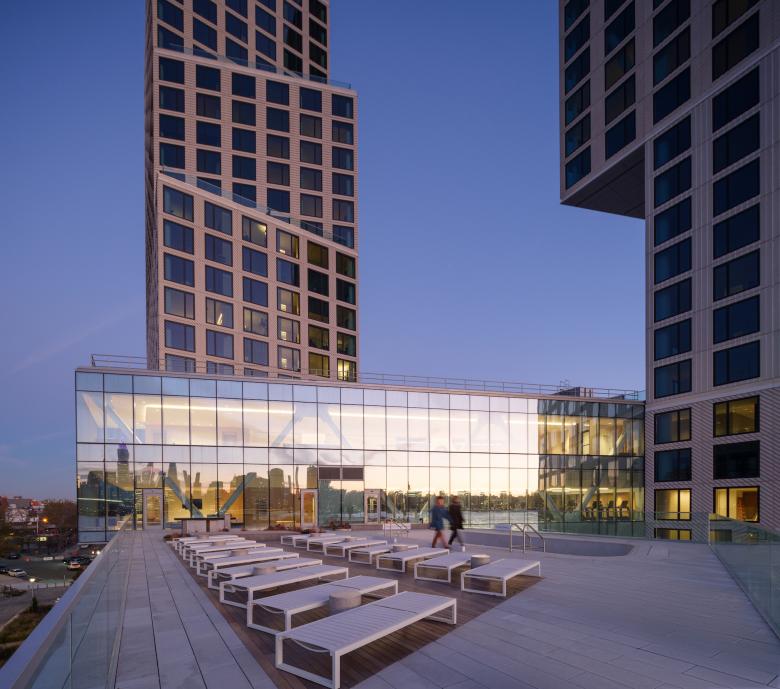 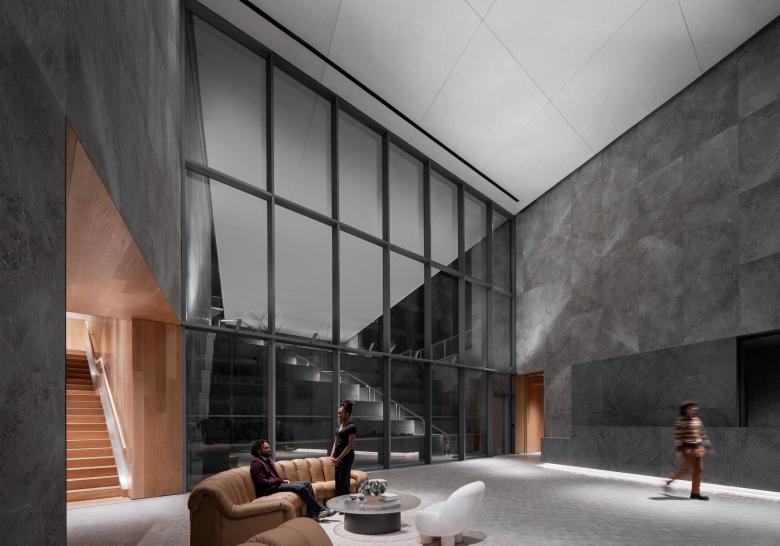 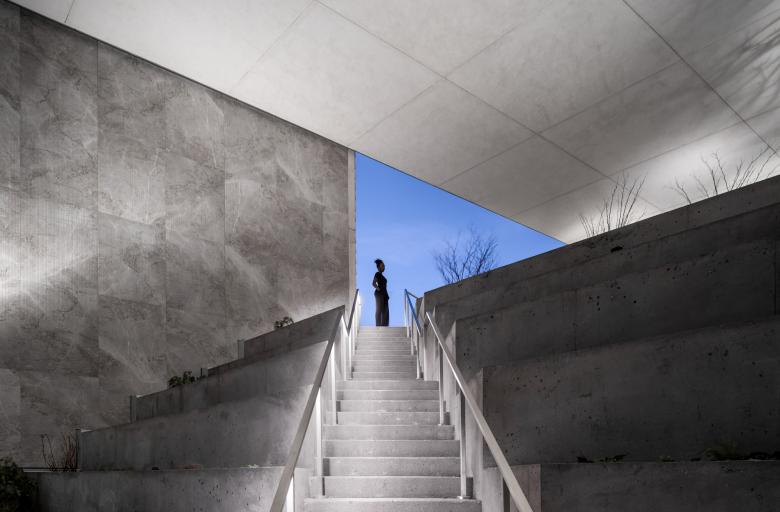 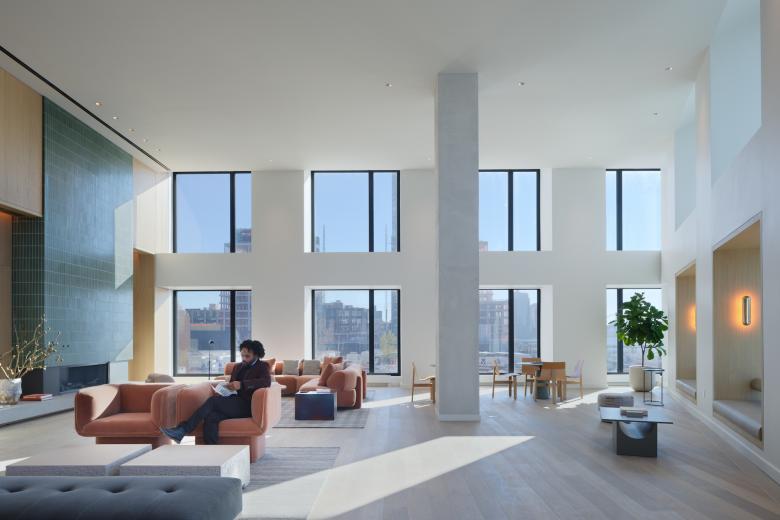 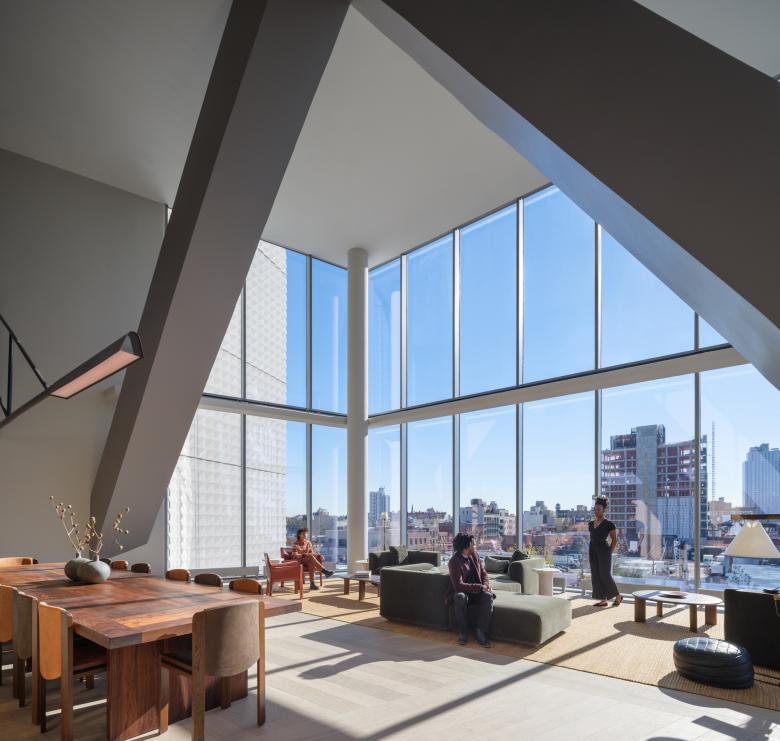 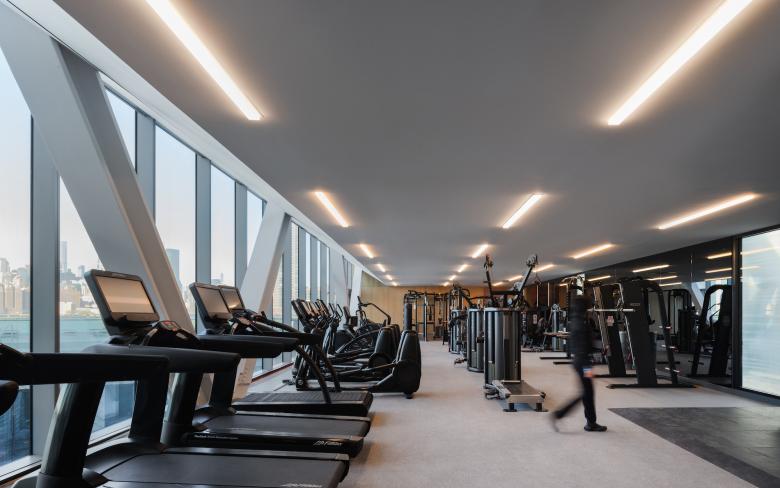 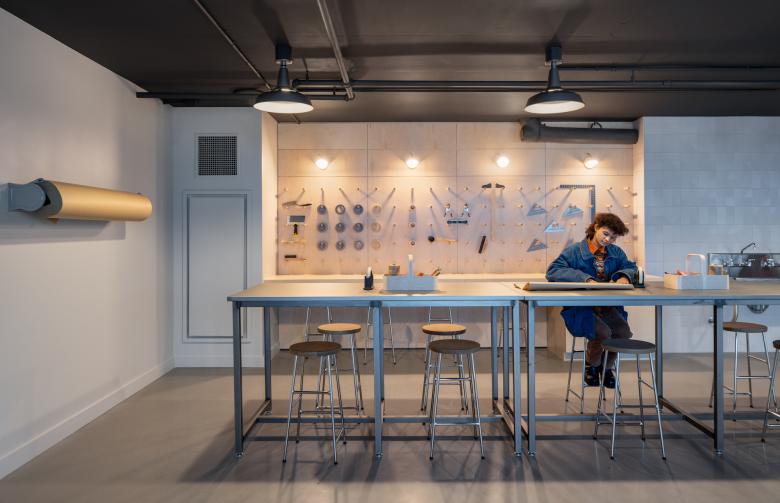 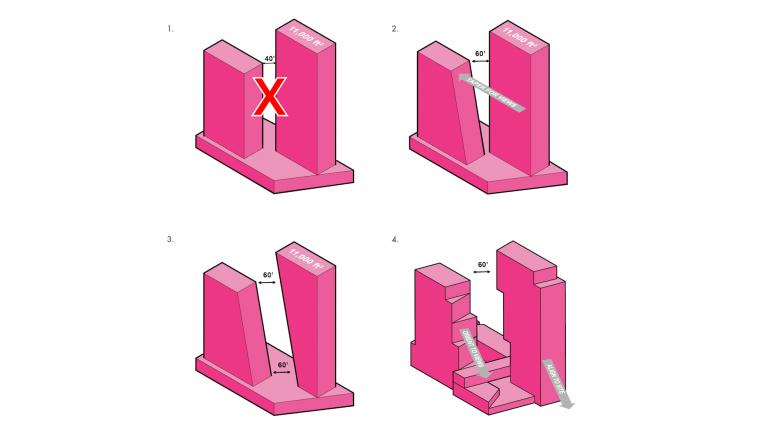 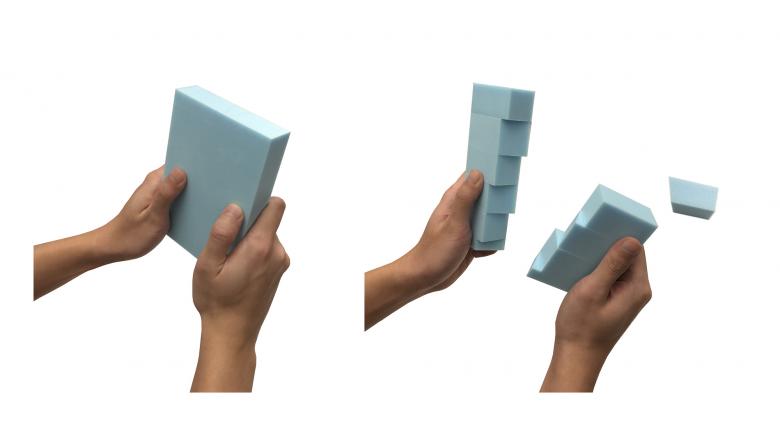 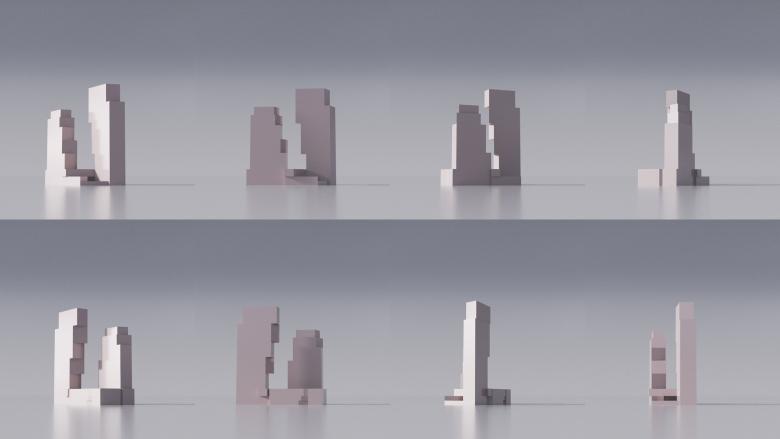 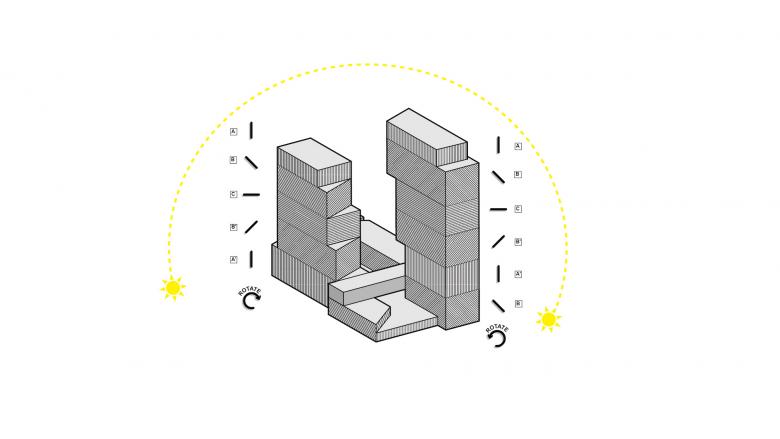 Greenpoint lies at the northernmost tip of Brooklyn where Newtown Creek meets the East River. The neighborhood—sometimes called “Little Poland”—has historically consisted of low-rise townhouses with industry at its waterfront edges. The industrial border, which included shipbuilding, rope-making, and more toxic activities such as petroleum refinement, cut the neighborhood off from the East River.

As part of a sweeping rezoning of both Greenpoint and Williamsburg in 2005, our site and blocks to the north and south were identified as an area for new residential density—introducing pairs of thirty- and forty-story towers to include market-rate and affordable housing (30 percent of units to be affordable). In exchange, this new development would open access to and along the East River. Our site sits at the conjunction of Greenpoint’s primary grid and a secondary grid that extends perpendicular to Newtown Creek. This hinge- point provides panoramic views of Manhattan, but also cuts the western end of the site, creating a trapezoidal outline and constraining the size of the block. Our challenge was to fit the desired amount of housing into a site and a neighborhood that both seemed too small to accommodate it.

The zoning allowed for a maximum floor plate of 11,000 square feet. We quickly found that this scale and required setbacks would result in only 40 feet of separation between our two towers—an uncomfortable proximity that undermined the potential of the site and would create a wall from the neighborhood. We began by reducing their footprints to allow for 60 feet of open space, more akin to the scale of a typical street. We could then strategically expand and contract the towers for zones of maximum efficiency within each.

The two towers simultaneously lean into and away from one another. The taller tower widens toward the east as it rises, maximizing views and creating a dramatic face to the neighborhood. The shorter tower, a fraternal twin, widens toward the ground to face a new waterfront park to the north. The two towers are shaped to create terraces and overhangs that emphatically link them together as if they were broken apart from a single block. A ziggurat and its inverse, the pair are distinct yet intimately connected by the void between them. The stepped forms of the towers and the articulation of their facades mediate the inevitable contrast in scale between the two towers and the existing neighborhood. The stepping divides the tower into seven- to eight- story blocks that echo the scale of the neighboring buildings. The facade reinforces this subdivision.

While The Avery’s glass curtain wall was rising in San Francisco, our proposal here sought to embrace solidity. Incorporating large 8-foot-by-8-foot windows into a grid of precast concrete maintains expansive views while making the complex negotiations between unit interiors and facade easier to accommodate. The solidity also creates a set of buildings that emerge more seamlessly from the neighborhood. Much like the shingled facades seen on Greenpoint’s townhouses, the precast panels are carved by a series of angled planes. The shingling of each “block” of the tower alternates in orientation to emphasize the finer scale of the towers’ mass—a dynamic relief that reacts to the movement of the sun.

Waterfront towers typically try to both maximize the views to the water and establish a distinct, even iconic frontage within the skyline. Too often that means turning away from the neighborhood, creating a “back” side and disengaging the tower from its context. Here, a set of cantilevers—extending the building 48 feet from its base—faces east toward Greenpoint and presents our most dramatic facade to the neighborhood.

Echoing Greenpoint’s pastoral origins as a neighborhood of family farms, two levels of green space open to the waterfront. Terraces are framed by a collection of common spaces. Above them, the towers are linked by an amenity bridge looking over the Manhattan skyline. Altogether, Greenpoint Landing aims to be a platform for living: connecting past and future, indoor and outdoor, urban streetscape and waterfront.

Other Projects by OMA - Office for Metropolitan Architecture