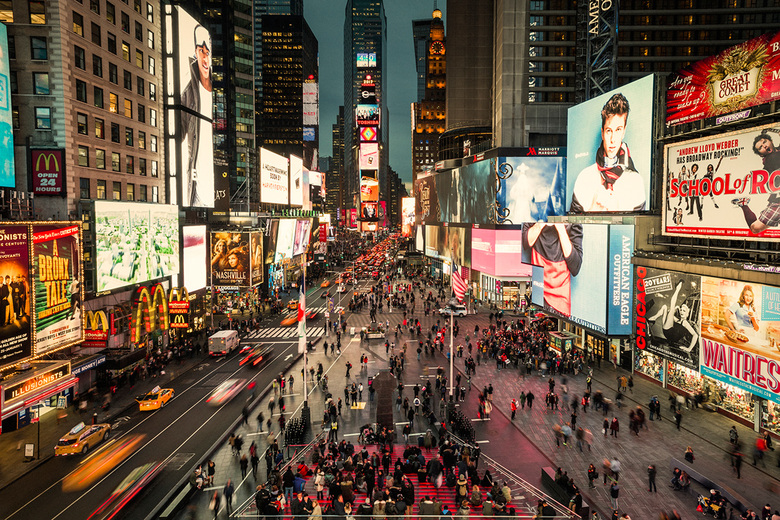 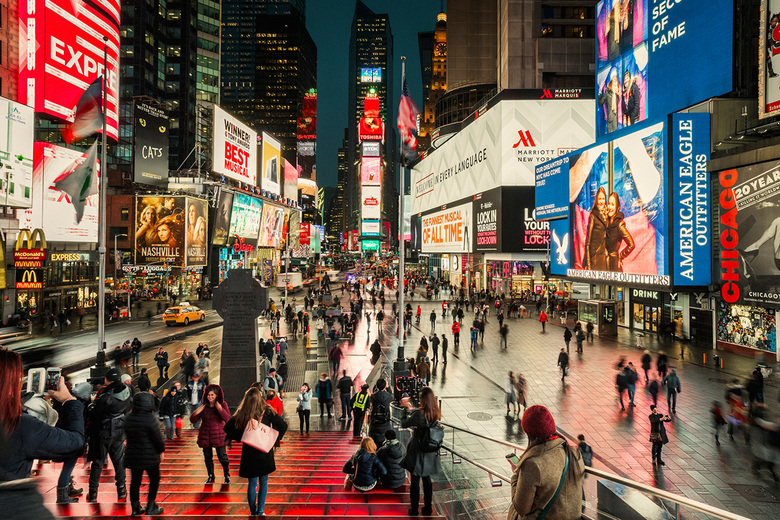 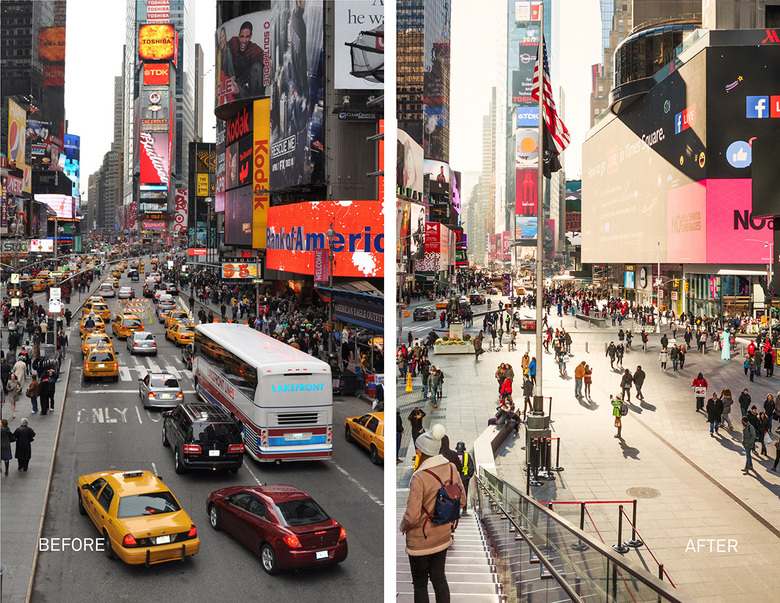 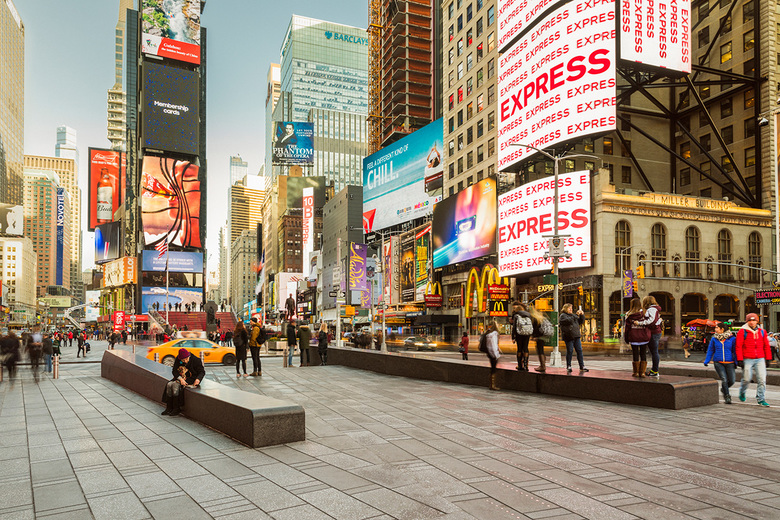 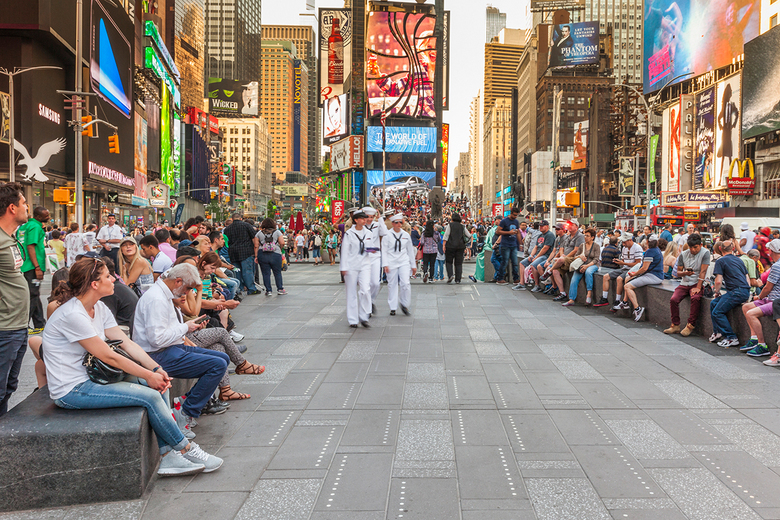 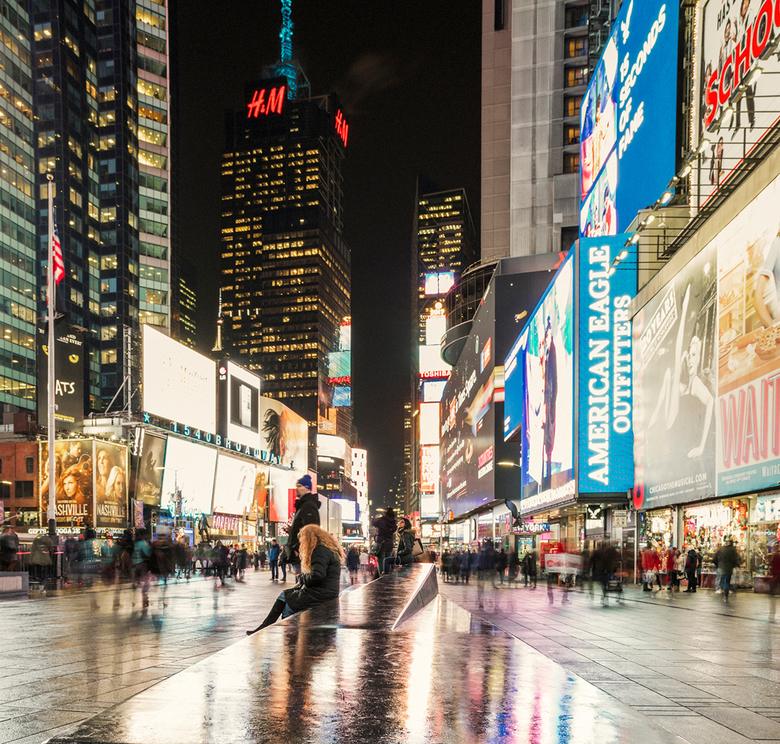 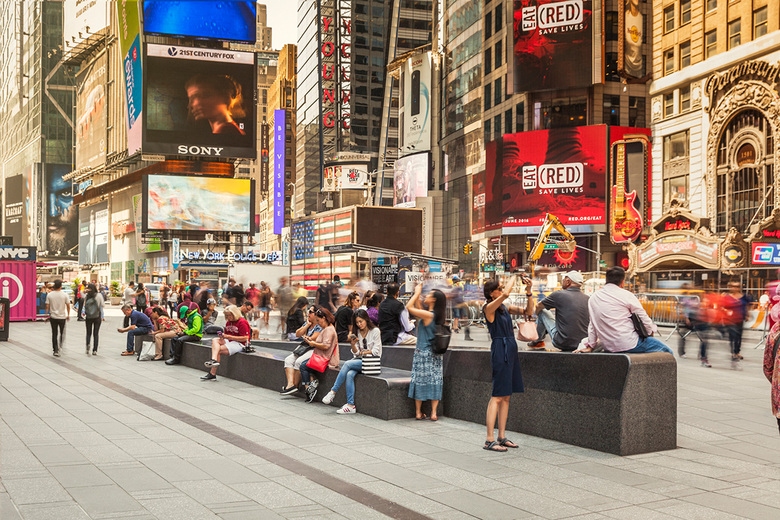 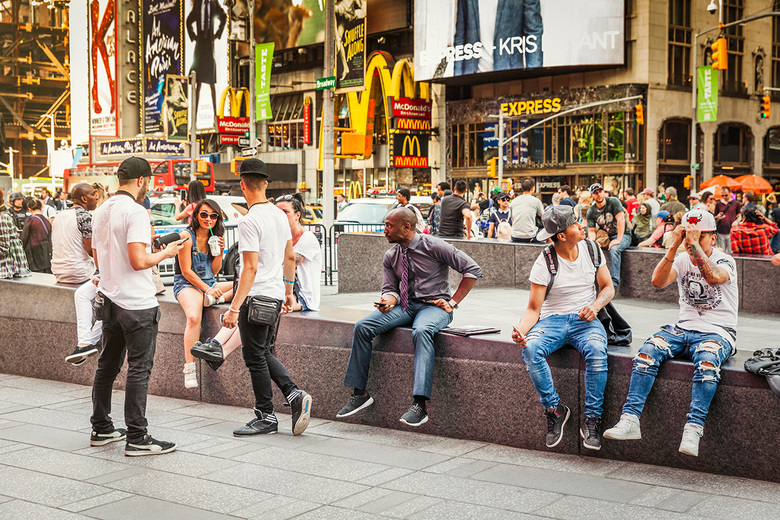 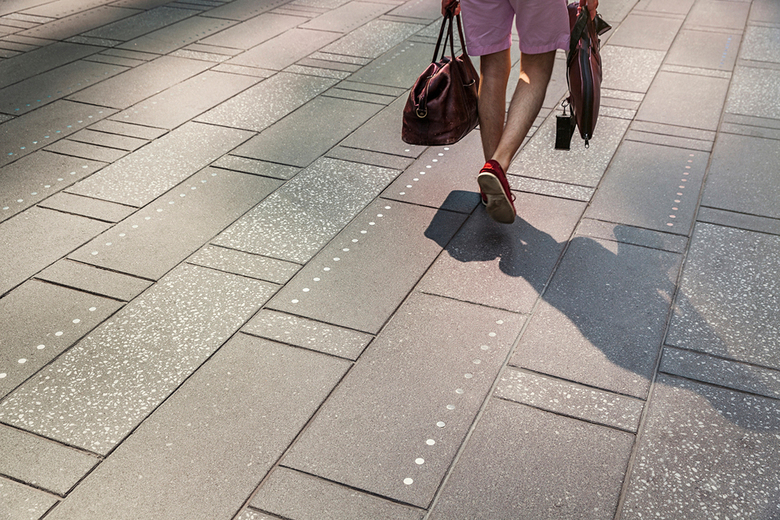 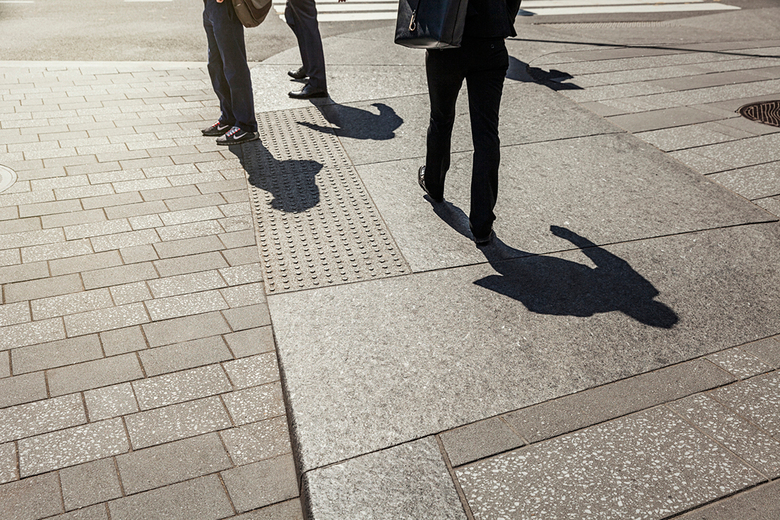 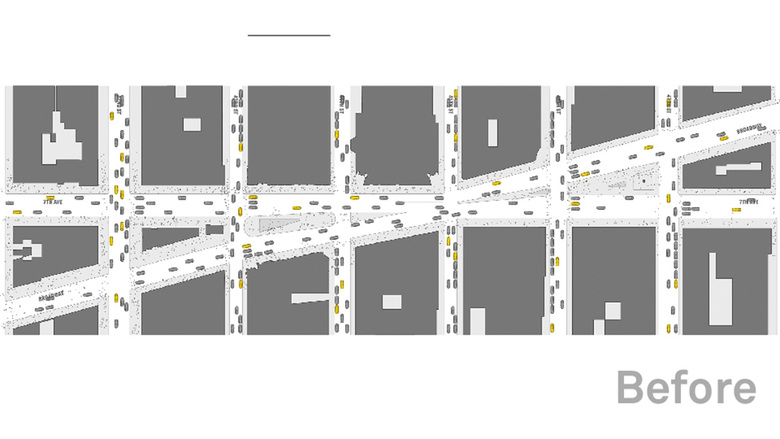 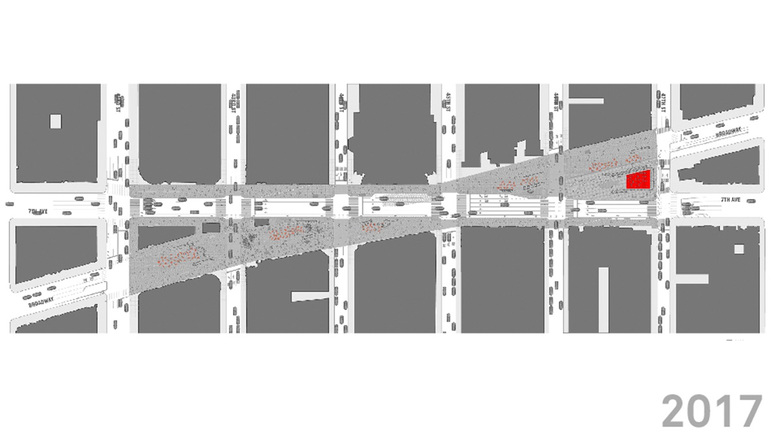 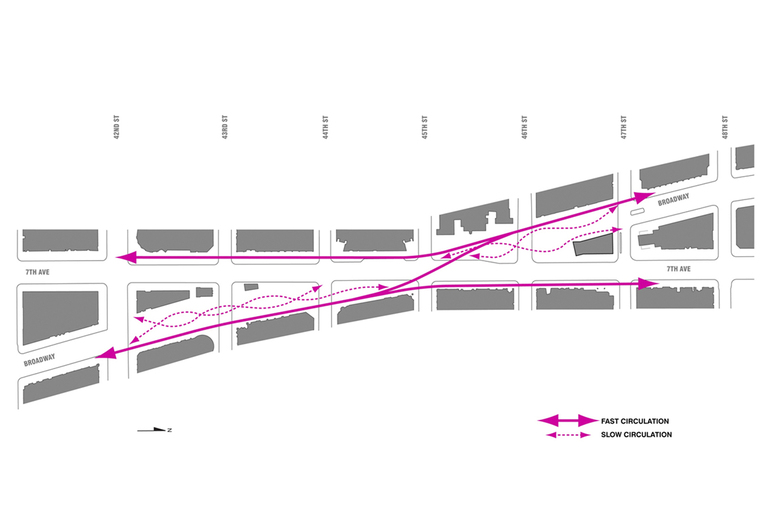 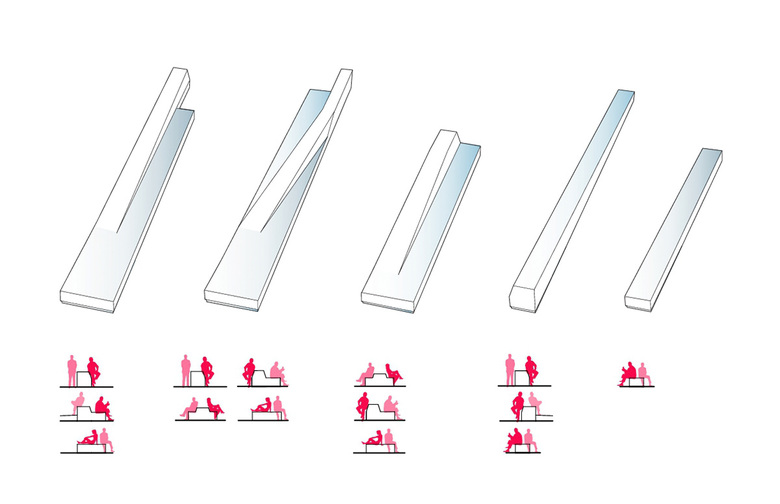 The new plaza on Broadway radically carves out 2.5 acres of pedestrian-only space at Manhattan's core, transforming a congested vehicular district into a world-class civic space.

Following the closure of Broadway to car traffic in 2009, Snøhetta’s design for the permanent pedestrian plaza cleared out decades of old infrastructure cluttering the square while creating a unified ground plane from building front to building front. Ten 50-foot long granite benches allow pedestrians to move through the area more comfortably, complementing the energy of the lights and excitement above. Since completion in 2016, the Reconstruction has doubled the amount of pedestrian-only space at Manhattan’s core. The design has transformed Times Square from one of New York’s most notoriously congested spaces into a radically open civic square, while also integrating crucial utility and event infrastructure upgrades.

The project site, known as the “Bowtie,” forms the heart of the Times Square Theater District, and is bounded by Broadway and 7th Avenue between 42nd and 47th streets. Since the Bloomberg administration closed Broadway to vehicles in May 2009, and the first section of Snøhetta’s pedestrian street opened to the public in spring 2014, the transformation has already had a significant impact on public safety, economic output, and user experience. Pedestrian injuries have decreased by 40%, vehicular accidents have decreased by 15%, and overall crime in the area decreased 20%. And with the removal of vehicles, air pollution in the Bowtie area has fallen by as much as 60%, making the space safer and healthier for everyone. Over 80% over visitors now agree that the pedestrian plaza makes Times Square feel safer.

Understanding the magnitude of these crowds and patterns of movement was fundamental to creating a successful new life for one of the most iconic public spaces in the world. Situated between Port Authority Bus Terminal on the west and Grand Central Station on the east, it functions as one of the key gateways to New York City: On average, 330,000 people move through Times Square every day. Accordingly, the new plaza on Broadway was designed to accommodate multiple speeds of pedestrian circulation with subtle design gestures that empower people to move in a natural, comfortable way through the space.

Snøhetta’s design is inspired by Times Square’s past and its rich entertainment history – a duality that influenced both the larger concept and the project’s details. Times Square’s signature buildings and spectacular signs - the glowing walls of the Bowtie - create an outdoor room right in the heart of Manhattan. Snøhetta’s design creates uncluttered pedestrian zones and a cohesive surface that reinforces the Bowtie’s role as an outdoor stage. This clear and simple ground surface made of pre-cast concrete pavers creates a strong anchor for the space, allowing the excitement of Times Square’s commercial components to shine more brightly above. The area’s new two-toned custom pavers are embedded with nickel-sized steel discs that capture the neon glow from the signs above and playfully scatter it across the paving surface, referencing marquee lights and Times Square’s theater history.

Ten fifty-foot long granite benches oriented along the Broadway Axis define and frame the public plaza. These benches manage pedestrian flow, creating interior pockets or eddies for people to stop and gather. Simultaneously, this allows for continuous thoroughfares on either side of the benches for quicker foot traffic. Rather than adding more visual distractions like signage, the design harnesses more implicit gestures such as the benches and renovated curbs brought up to street level, allowing users to feel psychologically at ease in an often-overstimulating public space. New power and broadcast infrastructure embedded in the benches eliminate the need for of diesel generators, temporary power cables, and broadcast equipment, enabling swift and efficient set-up and break down of the over 350 public events that place in the Square annually.

With a significant positive impact on public safety, air quality, and economic output, the project has transformed Times Square into a world-class civic space that reflects the best of Times Square and New York City, allowing the “Crossroads of the World” to retain its edge while refining its floor.

Other Projects by Snøhetta