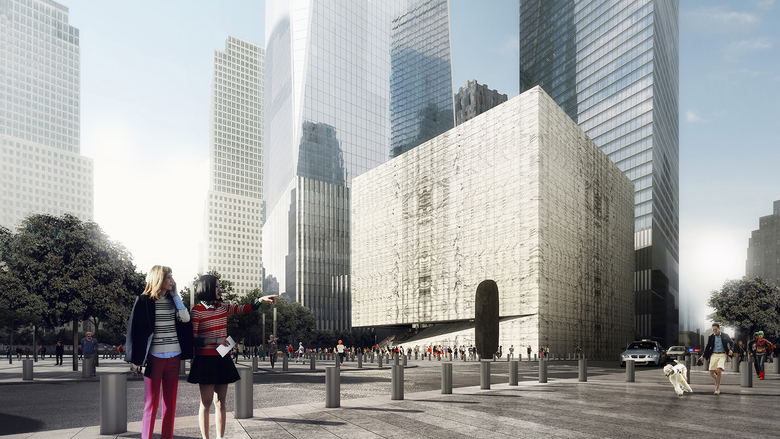 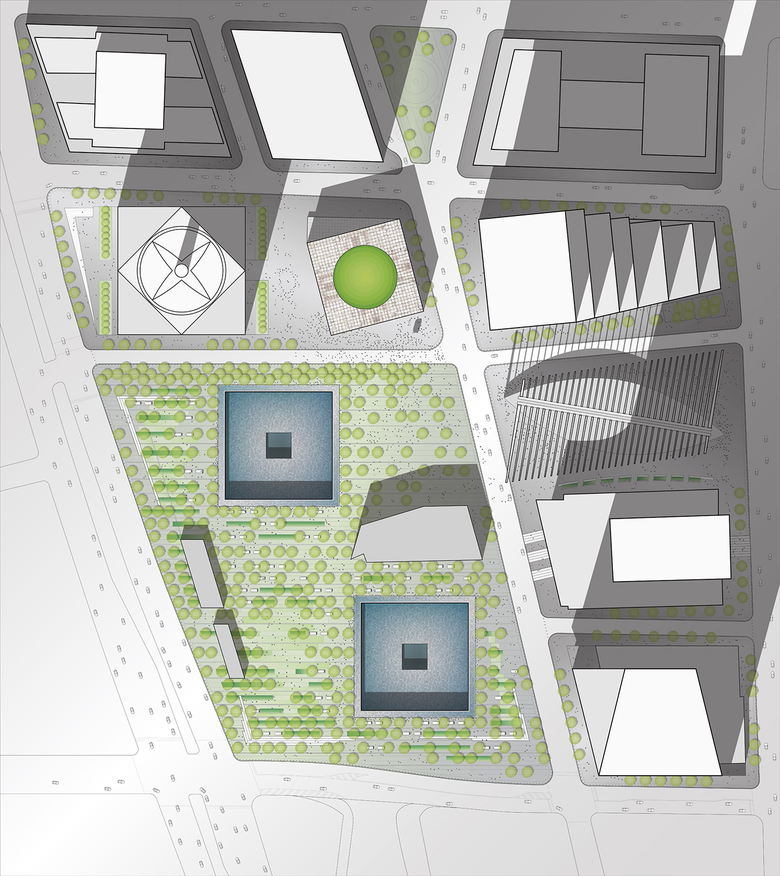 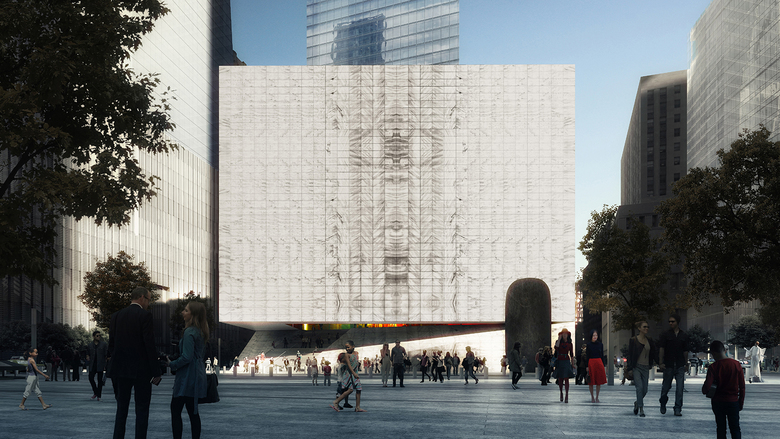 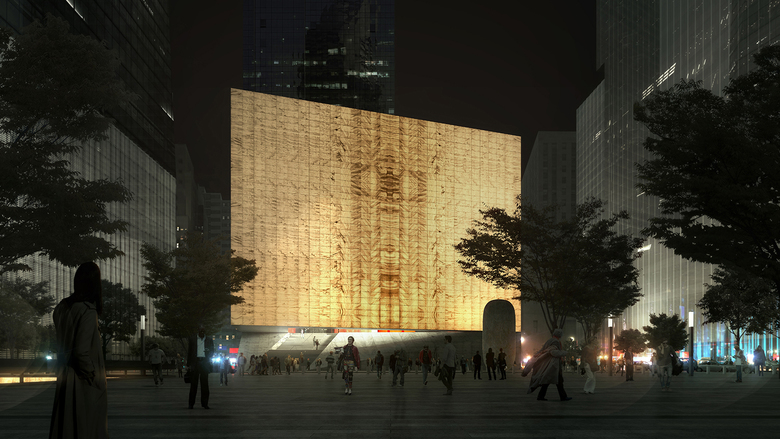 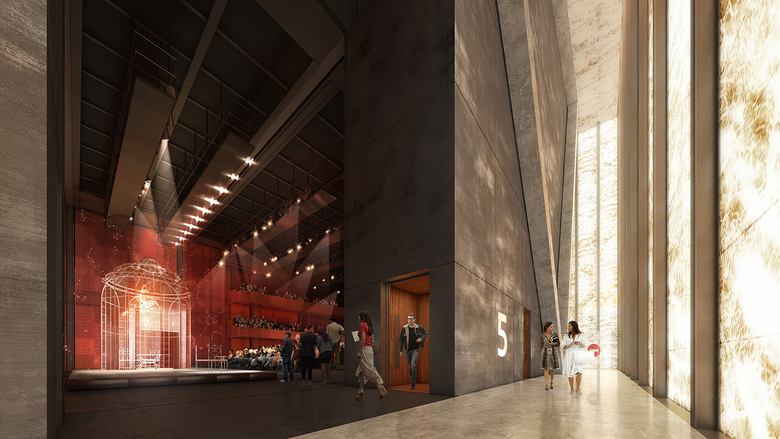 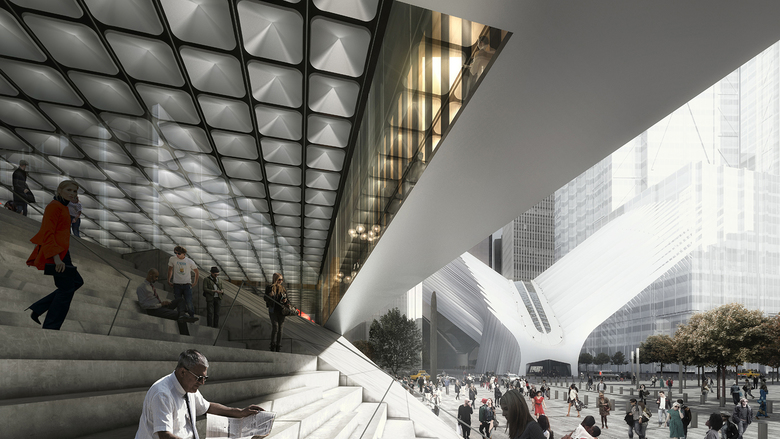 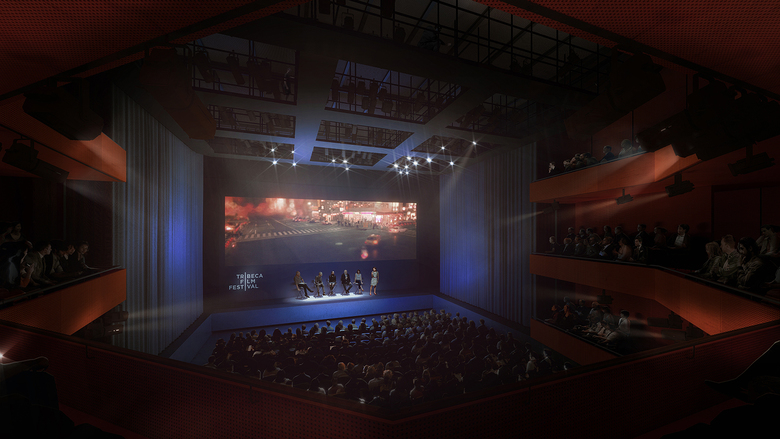 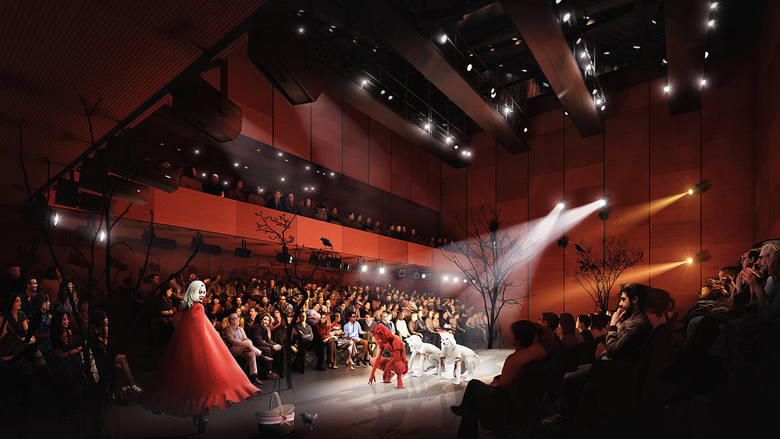 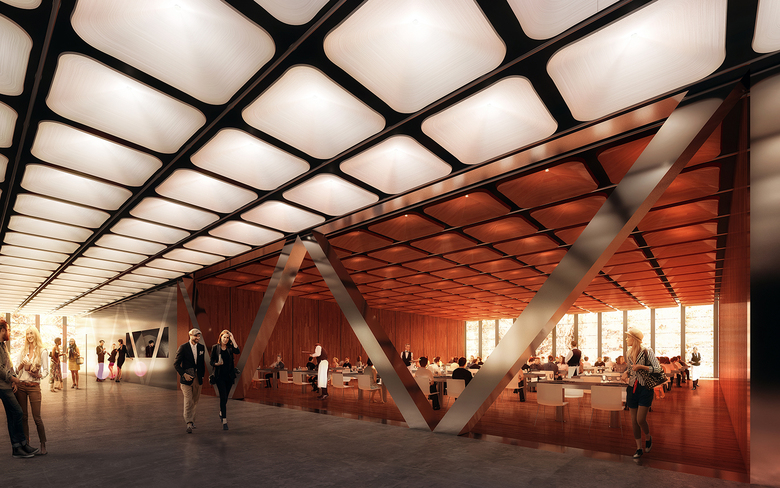 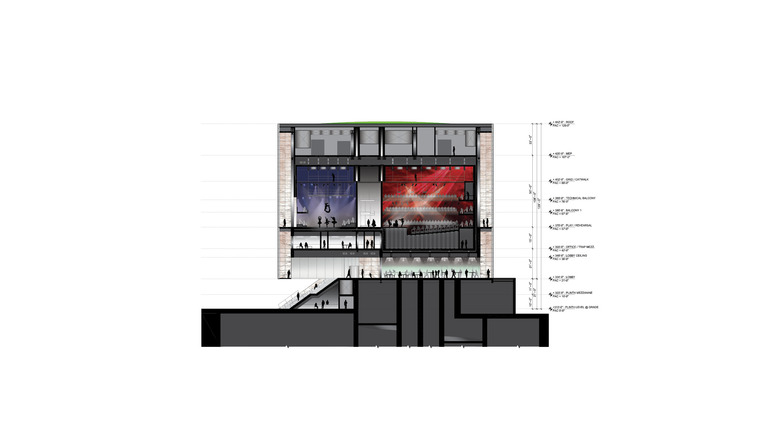 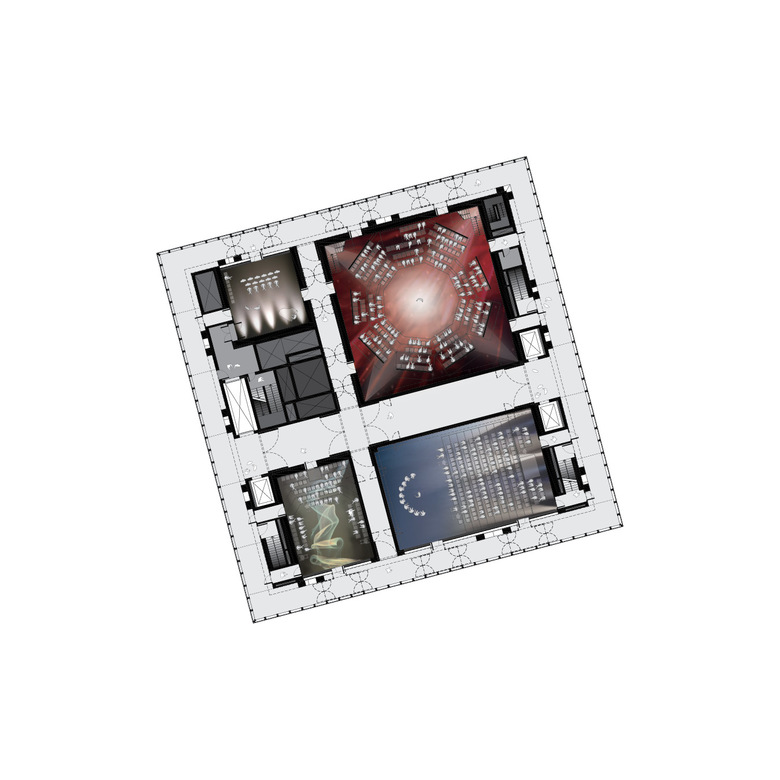 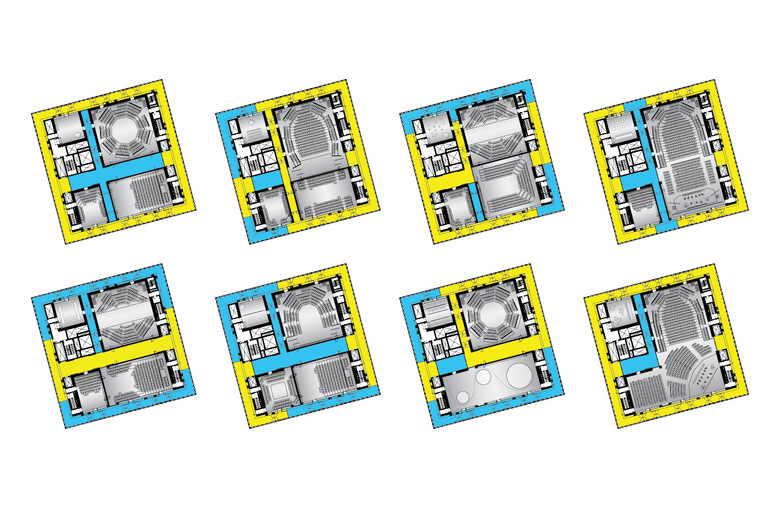 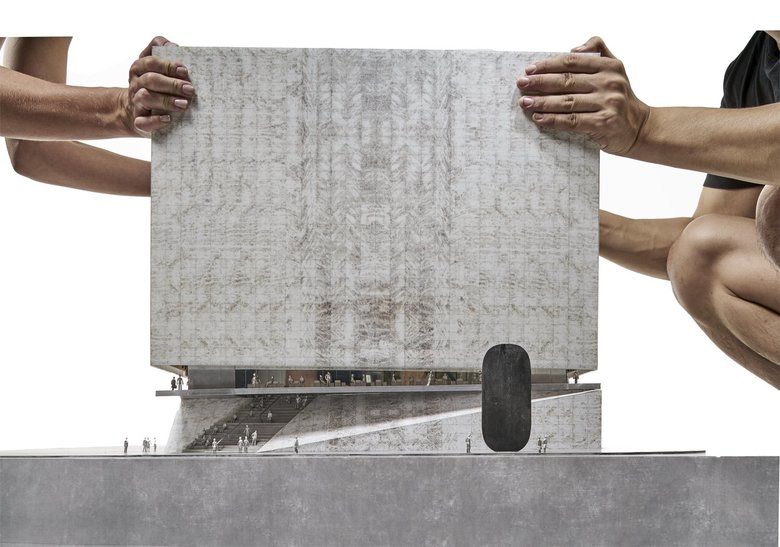 Program
Performing arts center, including three auditoria (499-, 250-, and 99-person) which can combine to form seven additional arrangements, and a rehearsal room—all eleven of which can adopt manifold stage-audience configurations; flexible front- and back-of-house circulation that can create diverse patron entry/intermission/exit processions; and (A-Z) offices, performer support spaces, and restaurant/bar

On the most significant site in New York City, the Ronald O. Perelman Performing Arts Center at the World Trade Center (The Perelman Center) will premiere works of theater, dance, music, film, and opera, transforming Lower Manhattan into a vibrant, global cultural heart. The design is inspired by The Perelman Center’s mission to defy experiential expectations. Its concept embodies the Center’s aim to foster artistic risk, original local productions, and worldwide collaborations; stand as the most technologically connected and advanced venue in the world; and engage the local community. The keystone and final piece of the World Trade Center master plan, The Perelman Center embraces creation and memory with respectful individuality.

The Rough in a Diamond – Amidst gleaming glass towers on the north side of the 9/11 Memorial, The Perelman Center is a pure form, rotated and elevated to accommodate complex below-grade constraints, address the 9/11 Museum and transportation hub, and engage the site’s main pedestrian streets of Greenwich and Fulton. The edifice is wrapped in translucent, veined marble—from the same Vermont quarry as the U.S. Supreme Court building and the Thomas Jefferson Memorial— laminated within insulated glass. By day, the volume is an elegant, book-matched stone edifice, whose simplicity and traditional material acknowledge the solemnity of its context. Daylight illuminates the interior through the marble façade. By night, this monolith dematerializes: silhouettes of human movement and theatrical configurations animate the glowing enclosure, an invitingly subtle revelation of the creative energy inside.

While the building’s pristine exterior befits the site, its muscular, utilitarian interior expresses the workhorse quality necessary for the changing nature of The Perelman Center’s artistic needs. Steel walls, concrete trusses, wood floors, perforated plywood panels, and other ruggedly beautiful materials encourage the frequent transformation of scenery, stage-audience configurations, and even the restaurant/bar and lobby. The building’s material duality—elegant exterior and robust interior—forms ‘The Rough in a iamond.’

Multi-Form, Multi-Procession, and Experiential Surprise: The Play Level – The Perelman Center is organized in three levels—Public (bottom), Performer (middle), and Play (top). The layout and character of the Play Level drive the design of the entire building.

The Play Level is a pioneering, highly adaptable performance palette that combines both multi-form and multiprocessional flexibility. It holds three auditoria (499-, 250-, and 99-person) and a rehearsal room which can double as a fourth venue. Using large, acoustic, guillotine walls that separate them, the three auditoria can be combined to form seven additional, unique performance spaces for a total of eleven arrangements—including the rehearsal room venue—which can all adopt manifold stage-audience configurations. On the perimeters of the rehearsal room and the 250- and 99-person auditoria, acoustic glass walls with integrated black-out blinds provide natural light into performances and rehearsals, and enable these rooms to be rented for events.

Directors can further choreograph the audience’s entire experience through a zone of mutability around the auditoria. Acoustic doors between scene docks, scene assemblies, and a circulation loop at the floor’s periphery allow directors to apportion any of these areas as front- or back-of-house, and to form unexpected lobbies and performance ante-chambers. Also key to these permutations, baffles pivoting from the auditoria’s exterior walls can function as traffic valves to direct the audience into or past an auditorium’s entrance, or block access to anyone but performers. And finally, the four elevator/stair couplets can be used individually or in combination, creating unexpected access sequences from the lobby to the auditoria in any of their varied formations.

As a result of this immense flexibility, the Play Level is a constant source of surprise for patrons, a ‘Mystery Box’ whose experiences are scripted entirely by each director’s imagination.

Direct Access and Inspiring Environment: The Performer Level – Right below the Play Level, the Performer Level contains all support areas for performances and artists, such as trap, dressing rooms, green room, musician room, quiet room, wig storage, and costume shop. Artists have direct, private access to the Play Level via a dedicated elevator/stair couplet, or—if blurring the line between performer and patron is desired—the other three public couplets. Unlike most performance venues which place performer and other back-of-house areas below grade, artists are at the core of The Perelman Center, with generous accommodations and daylight filtered through the ‘stone-glass’ façade.

Restaurant/Bar, Informal Stage, and Community Living Room: The Public Level – In contrast to the ticketed areas of the Play Level and the secure areas of the Performer Level, the functions of the Public Level can be enjoyed by anyone, anytime. This floor includes a lobby with information desk and coat check, and a restaurant/bar that can transform into a cabaret, a dance podium, a performance art space, or a ‘living room’ for Lower Manhattan community events such as voting. The restaurant/bar—used for refreshments during performance intermissions—extends north to an exterior terrace with views over the new sculpture garden nestled between The Perelman Center and World Trade Center Tower 1.

The Perelman Center’s exterior staircase brings theater patrons and visitors from the lobby back down to the street below. Half this grand stair offers generous seating for people who want to linger, watch the bustling city around, or contemplate the beautiful memorial across Fulton Street.

With its artistic freedom, openness to the community, pure form, and material duality, The Perelman Center galvanizes the culture of New York City’s lower downtown, and asserts its place amongst the World Trade Center’s constellation of world-class buildings.