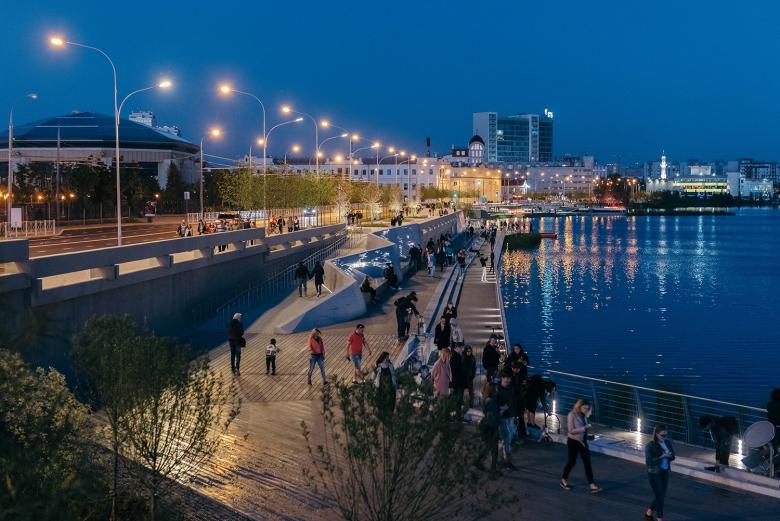 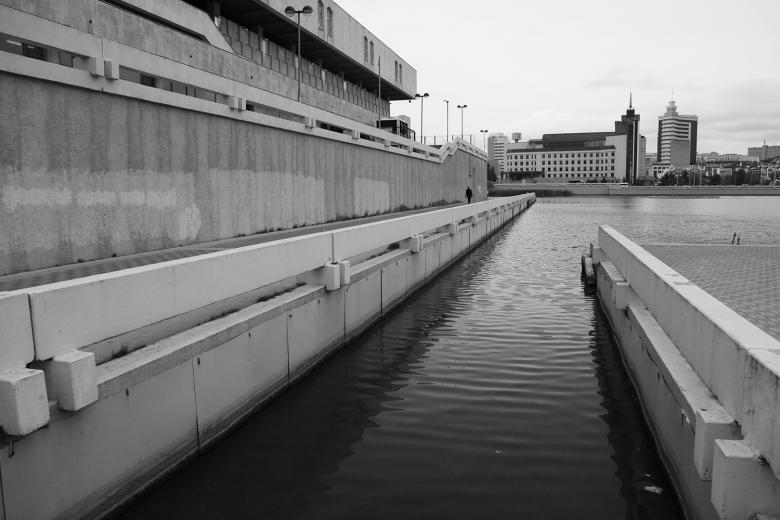 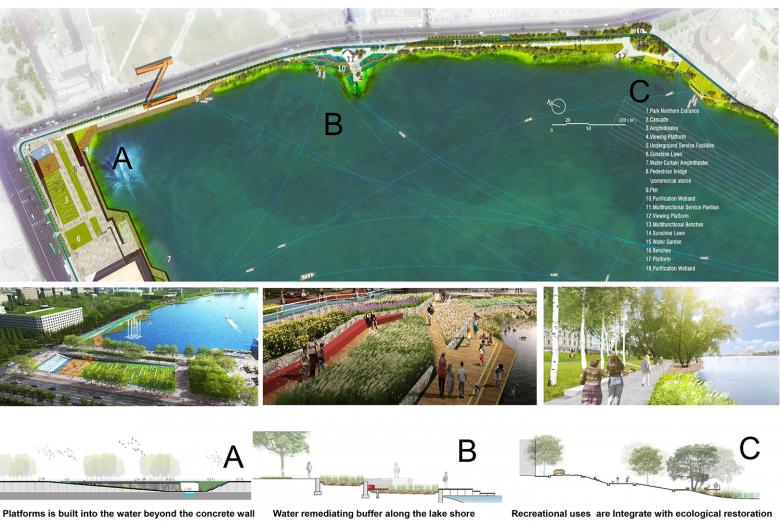 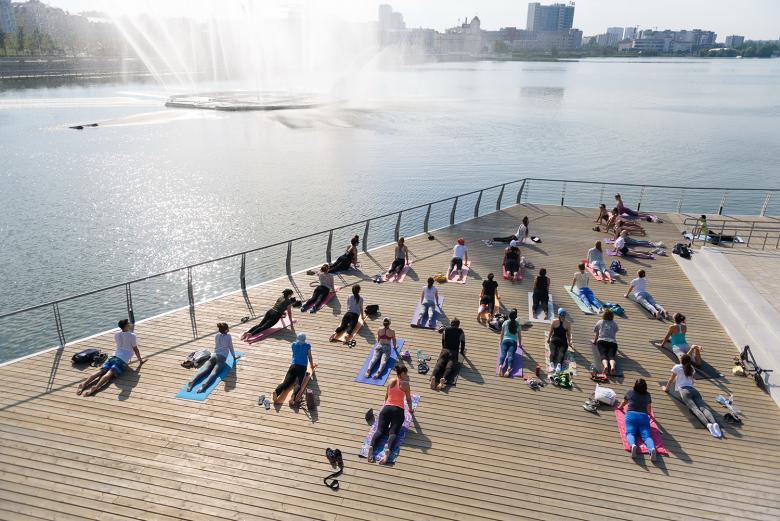 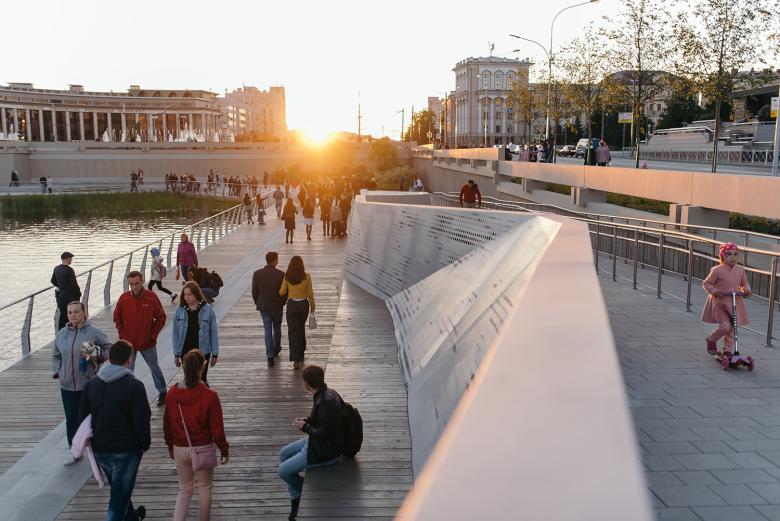 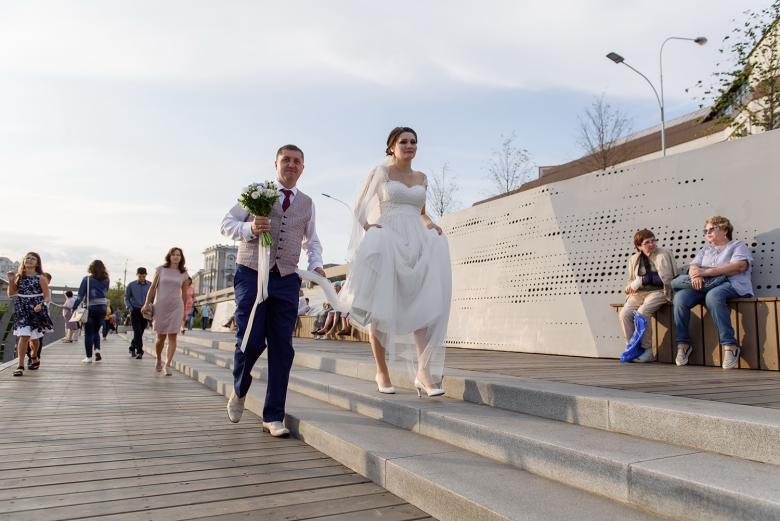 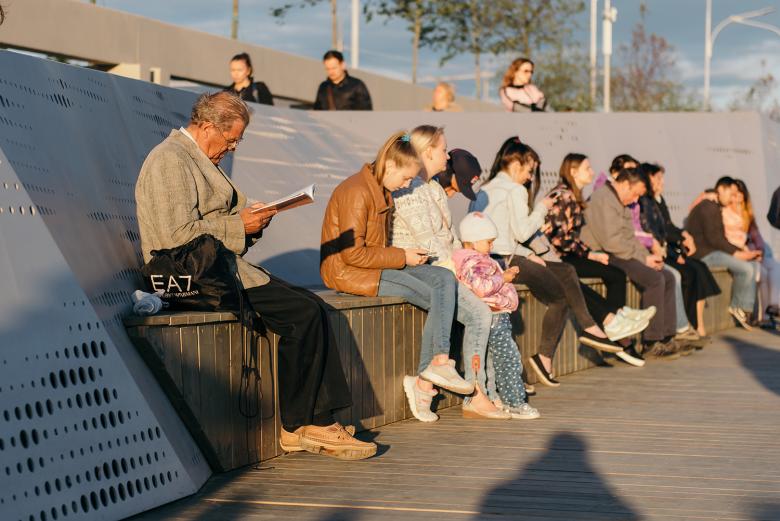 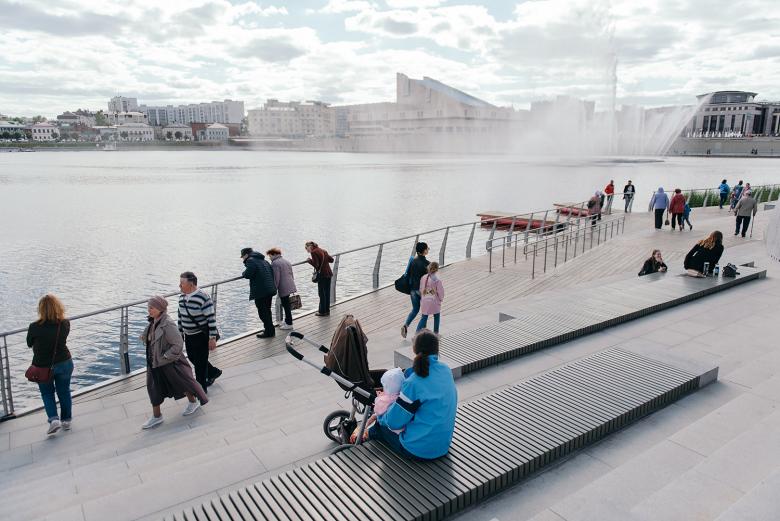 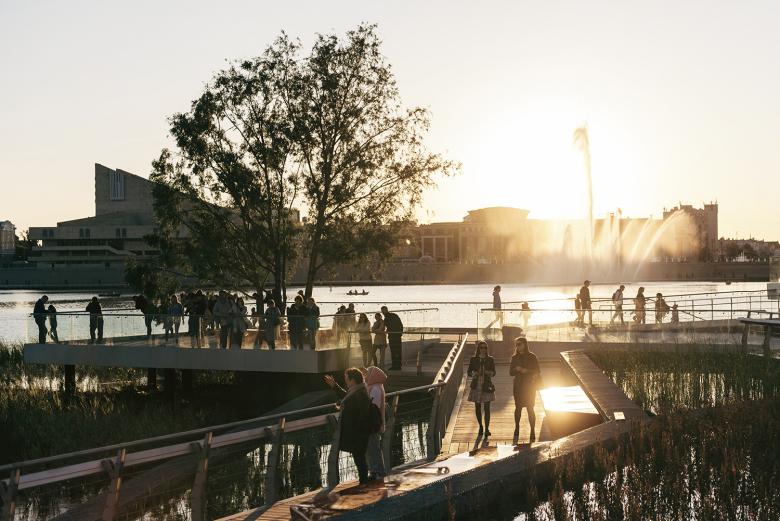 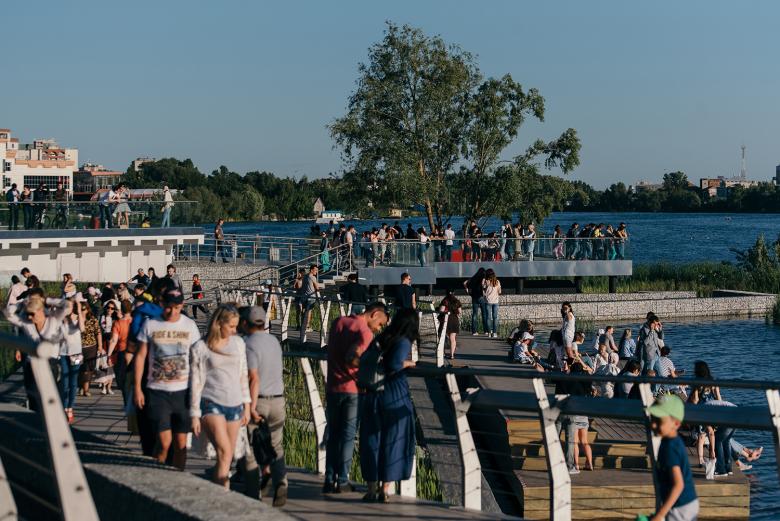 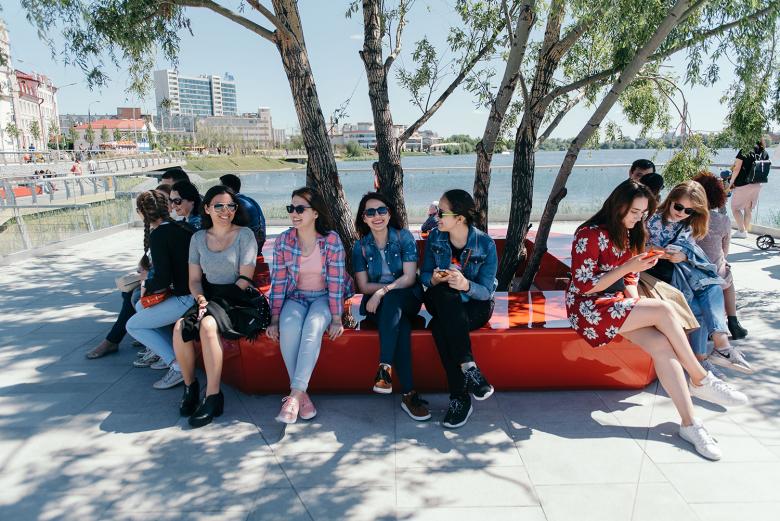 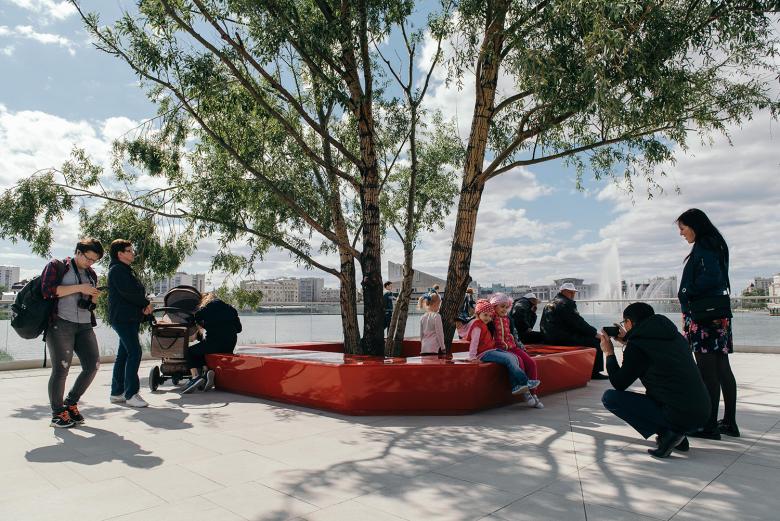 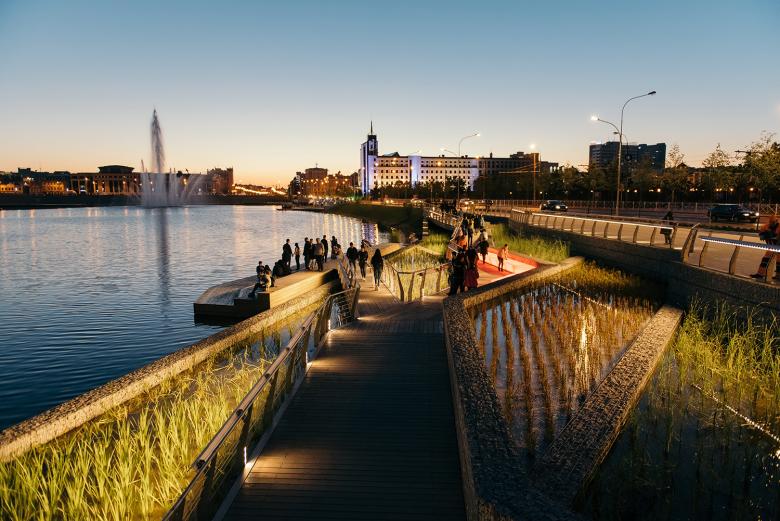 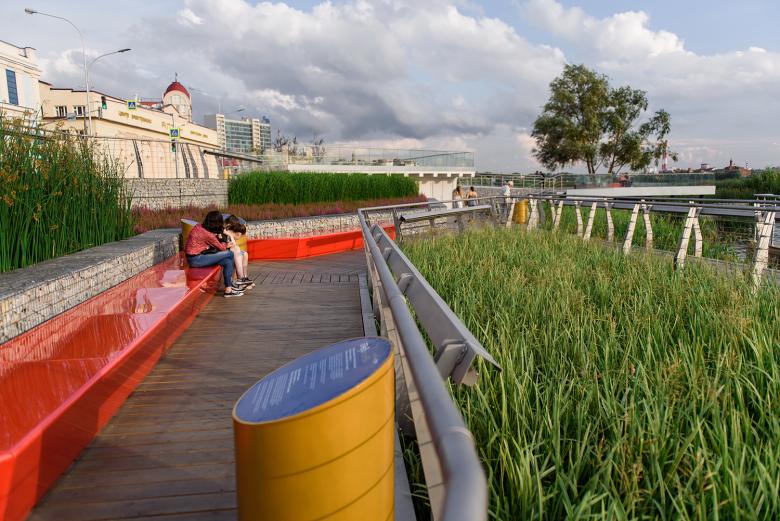 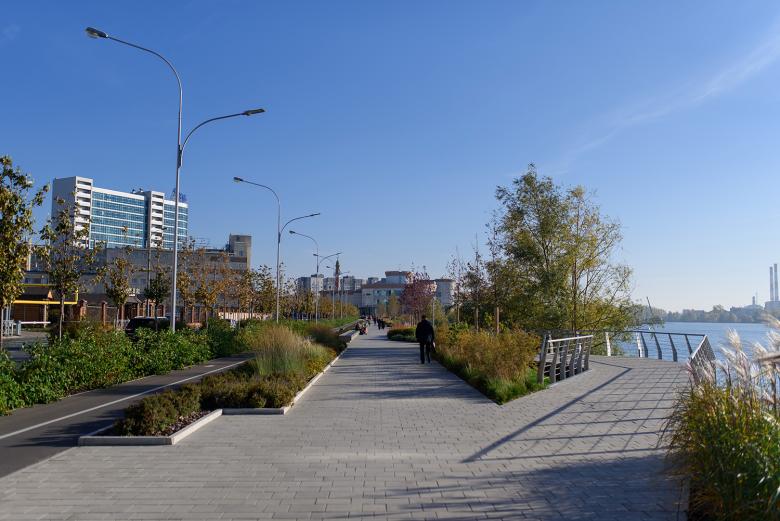 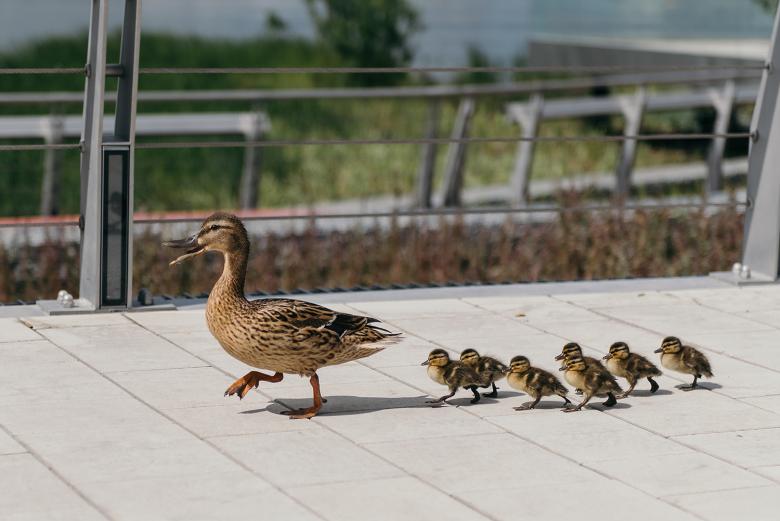 1 Project Statement
Through prudent transformative landscape interventions, the deserted prime waterfront of Kazan City at Kaban Lake has been revitalized in a short time span. The project showcases landscape as an interactive medium that regulates hydrological environment, creates public access and provides numerous opportunities to connect new public realms which can function as a common denominator of nature, culture, and social developments. Used by tens of thousands of people daily, the project has now become a model of urban renewal, sustainable development and social equity in Russia and celebrated by the state and beyond.

2 Challenges and Objectives
Kazan is the capital of the Republic of Tatarstan, and is the sixth most populous city in Russia, with a population of 1.2 million. The city’s prime waterfront is the north and east shoreline of Lower Kaban Lake. The project covers a shoreline of 2.0 kilometer (1.4 miles) and an area of about 30 hectares (74 Acres). After 700 years of dumping domestic and industrial waste in Kaban Lake, the lake was forgotten as if not in existence and the city was alienated from its waterfront, resulting in the loss of an important source of cultural vitality and ecological amenities. While the industries surrounding the lake were bankrupted in past decades, the urban runoffs are still polluting the lake; brutal concrete embankments were built into the water in the historic downtown section turning the city’s prime waterfront into a lifeless concrete desert; other parts of Kaban Lake were mostly inaccessible to the public due to high-speed roadways, private communities, and overgrown groves on abandoned brownfield. The existing development area of Kaban Lake was planned around the automobile, which not only fragmented wildlife habitats, but also prevented people from reaching the waterfront. Utilizing the development opportunity presented by hosting the 2018 FIFA World Cup, the Tatarstan government decided to reclaim this prime waterfront.

3 Design Strategies
After winning the international competition, the landscape architect was commissioned to design the Kaban Lake waterfront revitalization project. In addressing the above challenges, he proposed three major transformative strategies to reclaim the vitality of Kazan’s prime waterfront:
(1) Making the waterfront accessible and safe: the brutal concrete flood wall and the traffic road along the shoreline severed the relationship between the city and the water. To solve this problem, a series of platforms and boardwalks built into the water beyond the concrete embankment; ramps and stairs link these pedestrian paths and places that float above the lake with the pedestrian paths on the land. Bicycle and pedestrian trails were constructed along the lake shore. Numerous seats are provided along the pedestrian paths and the platforms.
(2) Creating a water remediation buffer along the lake shore: terraced wetland and bio swales are designed to catch the flows from several small ditches and the surface urban runoff. These biological infiltration facilities are integrated with recreational design and public education.
(3) Programmed activities: Working with the Ministry of Culture and local communities, various cultural and sports activities are programmed, such as music concerts and movies on summer nights, yoga in the morning, and environmental education tours in daytime. People with different believes and ages gather to enjoy the prime landscape that has been forgotten.
4 Conclusion
The project was completed in one year and has proven to be a great success. The first month it was open to the public in May of 2018, the formerly deserted waterfront attracted 50,000 users daily. People of different beliefs, ages, and genders find their place at the waterfront. They gather here for concerts, movies, exercising, yoga, weddings, or simply people watching and enjoying the sun. The cleansed and vegetated lakefront also attracts more migrant and resident birds. After over century’s alienation from the city and its people, Kazan’s neglected prime waterfront has now been reclaimed with ecological health, cultural vitality, and the residents’ feeling of belonging, as well as the dignity and the identity of the People ’s Republic. This project was awarded by the APA (American Planning Association) the 2019 International Excellence Planning Excellence Award, the Kevin Lynch Award for Urban Design.